We were out on Zimbabwe’s open savannah, my eyes swimming in the heat, and the lion was right in front of me. So I stretched out my hand to stroke it…

But it was the lion, not I, who was the endangered species here. And the walk is part of a programme to protect them.

The number of African lions has halved in the past 25 years, so charities are breeding them in captivity, introducing the cubs to stalking and hunting, before they are released into an enclosed reserve to hunt and fend for themselves. And it is only the cubs they give birth to here, who have had no human contact, that can go wild.

Lions can live for up to 20 years, making this a costly process. So Lion Encounters, based near the Victoria Falls, uses the brief period when the human-reared lions are introduced to the bush to give tourists a chance to walk with them, subsidising the greater part of their lives.

All this was explained to us at a short briefing. But it was when our guides got into the dynamics of the 45-minute walk that I became nervous. The nine of us were given sticks so that if a lion did turn on us, we could distract it. We had to walk behind them, so as not to challenge their dominance, and shouldn’t touch their heads, only their rear quarters. Did I hear that right?

So, sticks in hand, we were led to meet Phezulu and his sister Pendo, who were lying nonchalantly in the road, surrounded by five or six rangers, two of whom had rifles. Yes, one assured us, the lions had been fed. And, with a little coaxing, they set off into the African bush under a solidly blue sky, with all of us right behind.

Having been brought up by humans – our guides explained – the lions viewed us as older members of their pride, which was why we could walk with them. Indeed, though they looked the size of adults to me, it would be unnatural for cubs this age to be in the bush alone.

Being a tad nervous, I hung to the back of the pack, hiding behind my status as a senior member of the pride. But clearly Phezulu, with his adolescent beginnings of a mane, was tiring of hanging around these old-timers, and set off on his own into the grasslands.

The rangers don’t discourage this, and two followed him. On these daily constitutionals some lions have killed impala, giraffe, even wildebeest in front of tourists. But on this day their prey remained hidden in the buzzing bushveld, with the cry of ibises warning of our coming. 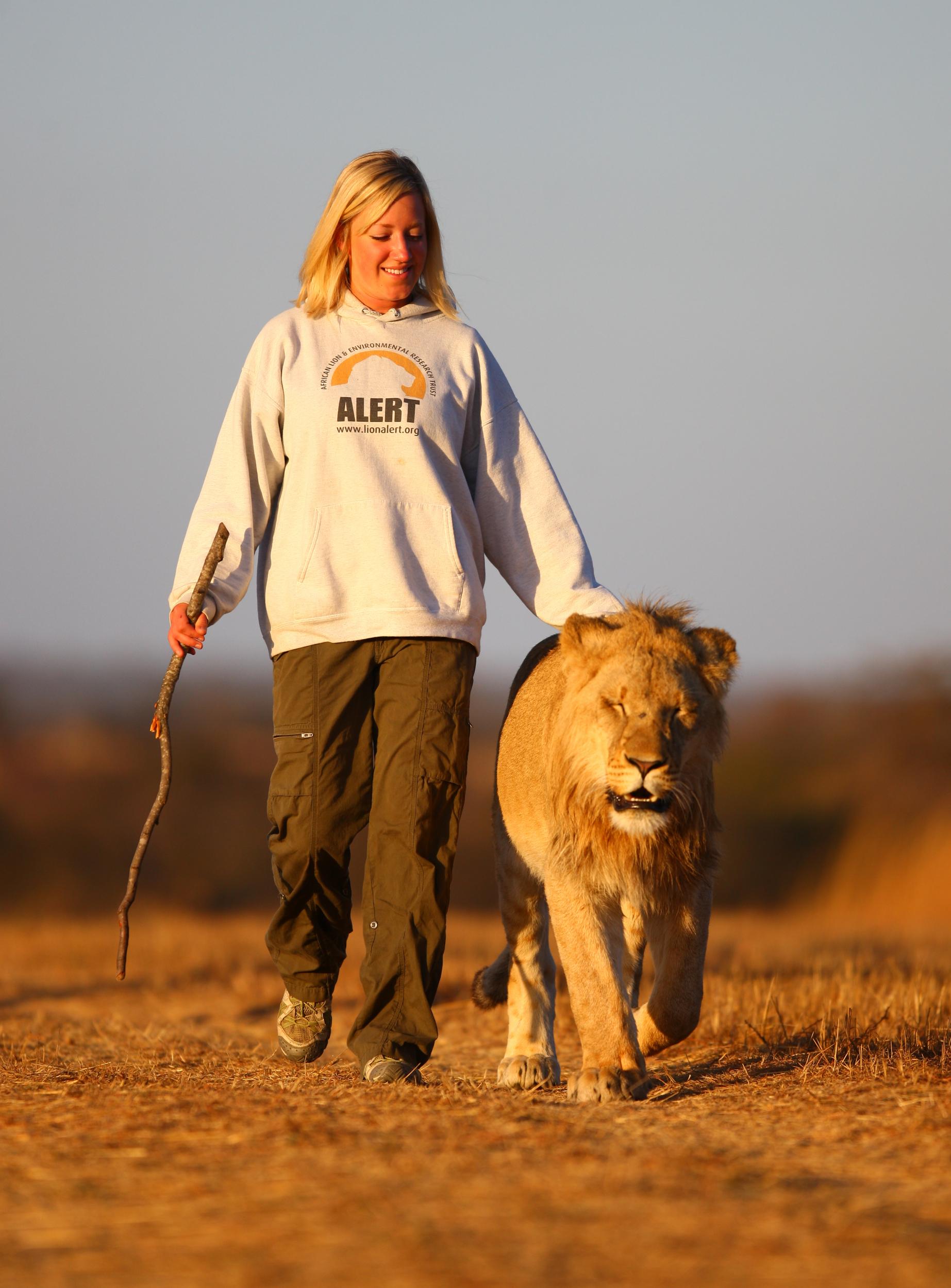 Lions are also rather lazy – sleeping up to 20 hours a day. And once Phezulu had gone off, Pendo decided on a lie-down.

Being right behind her at this point, I plucked up my courage. I find that our neighbour’s cat will scratch me if I stroke its head, but likes a back rub. Assuming Pendo was similar, I stretched out to stroke her hindquarters.

Immediately her mouth opened showing off an array of impressively white teeth… and she let out a languorous yawn. Clearly big cats and little cats aren’t that different.

The sun beat down as we continued along red dirt paths through the low scrub. Lions struggle in the heat just like us, so Pendo paused at a water hole, giving us the perfect photo op beside her.

Soon Phezulu rejoined us and, when both lions stopped, panting, under a camel thorn tree, we were all relieved to be in the shade.

Finally, they led us the short distance back to the lodge – where they knew their ready-made dinner was waiting. And it was at the lodge that we could see the other cubs, some of whom at less than three months old were too young for a trek through the savannah. 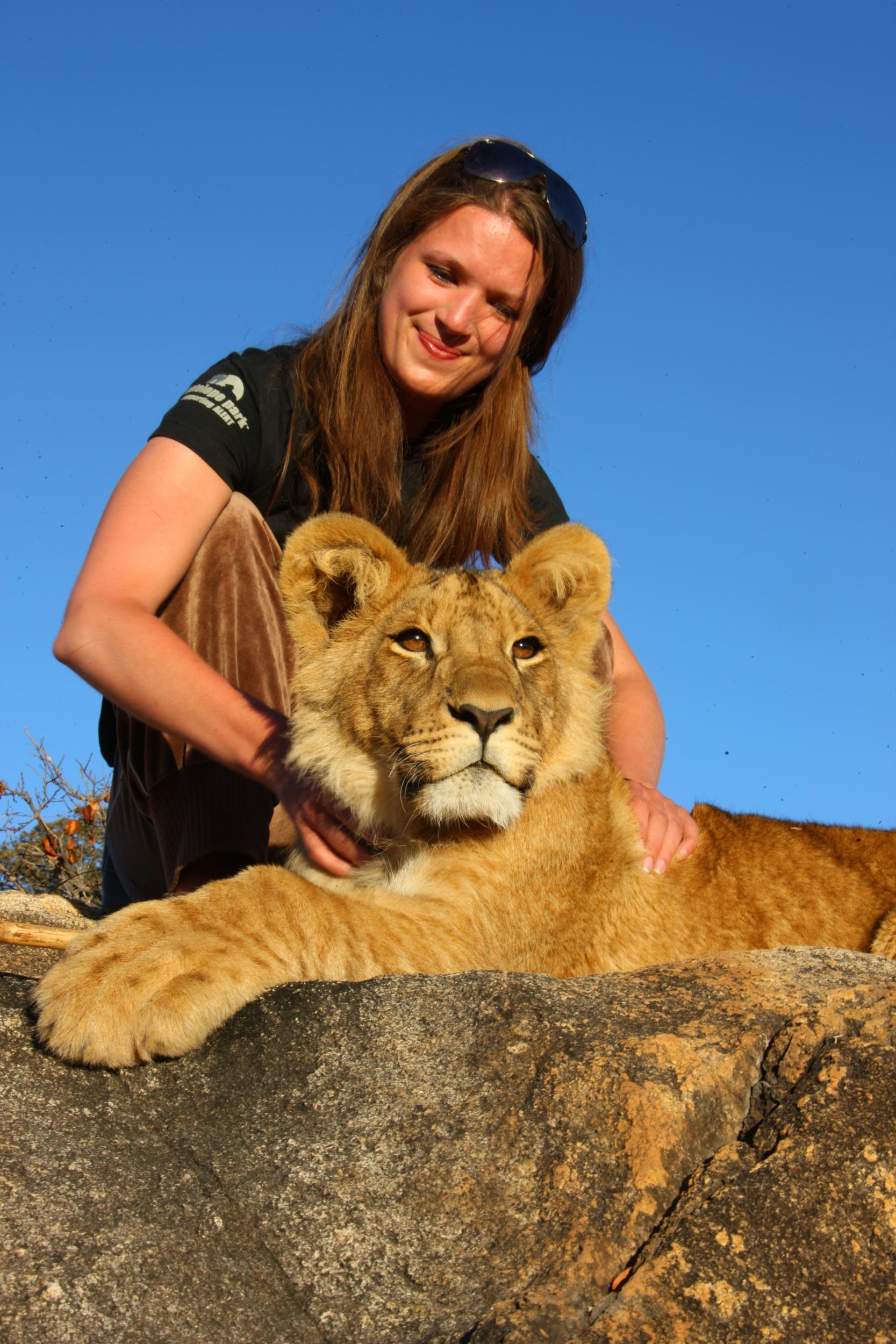 Their turn will come. The walks take place every day of the year, even if no guests show up. Of course, if guests do come, the $150 each pays helps the conservation effort.

The lions were just one experience in Zimbabwe that took me far closer to big game than I’d ever imagined. The others also had a focus on conservation and not one involved being cooped up in a minibus.

On an open-air dinner cruise up the Zambezi, close to where the river cascades into the Victoria Falls, we sailed worryingly close to some rocks… or so I thought until one opened its mouth in a languid hippo’s yawn.

At our hotel, vultures swarmed above us, before being fed within yards of where we sat – to protect them from the poachers and farmer who poison them. And on an elephant-back safari, we let orphans from a disastrous cull in the 1980s carry us gently through the bush. Like the lions, their offspring will be released into the wild.

Of course, programmes that offer tourists the chance to walk with lions or ride on elephants have come in for criticism. Nobody is suggesting that those lions that walk with humans could ever be released into the wild; only their cubs. And this is a slow process, so the results have yet to be seen. Is this one of those ill-fated conservation schemes, spurred on by good intentions? Or is a legitimate endeavour given the fact that the number of African lions has dropped by 42 per cent in the past 21 years? Much of this is due to loss of habitat, as well as poaching and hunting – and it is seriously concerning to hear allegations that some of the older lions in such schemes are released for canned hunts.

On balance, I am reminded of the arguments for keeping animals in zoos. Perhaps the most compelling one is that, by exposing people to the plight of wild species – people who would otherwise not know anything about it – we are doing the best we can to halt nature’s continued demise. Ignorance is almost always our greatest enemy.

The Victoria Falls Safari Lodge (africaalbidatourism.com) has doubles from US$422 (£324), B&B.

The Lion Walk (lionencounter.com) costs $150 per person and is held twice a day, every day.

British and Irish nationals must pay US$55 in cash for a visa on entering Zimbabwe.

How Travel Agents Can Battle Overtourism

Tui admits ‘we haven’t got it right’ over coronavirus refunds