Home » Destinations » ‘A pen can change the world’: the duo behind the ‘world’s largest public library’

There are thousands of street food carts in New Delhi. But only one has the opening lines of Riyazat Ullah Khan’s poem Wazoodiyat on the side:

Where can the pauper keep his pain of existence?
He has no container but a heart.

The sticker bearing the couplet is from a campaign called StickLit, which seeks to make literature more accessible by placing quotes in public spaces.

Nidhin Kundathil and Manoj Pandey had the idea for the project while contemplating the advertisements, posters and billboards that are consumed almost subliminally on Indian streets.

“We thought of turning this [visual] experience on its head to create a completely new and refreshing alternative for passersby – [one] which was not just selling something, for a change,” says Pandey, 32, a freelance writer in Darjeeling.

The idea subsequently evolved: they would make what they call the world’s largest library – “the largest repository of good literature in public spaces: a library that’s free for all”. 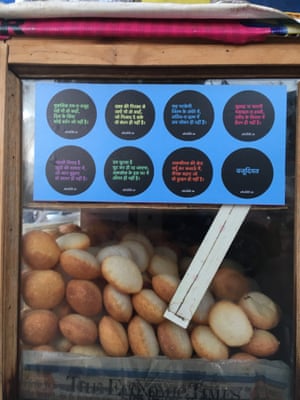 So they hit the streets, putting up free-format stickers, posters and wall murals. “Doing anything on the street is tricky as there are multiple factors to consider, like police or permissions,” Pandey says. “It’s ironic how we have to run away for trying to do some good for society.”

After starting in Bengaluru and Delhi in 2017, the project has spread all over India, with volunteers in various cities taking it up. The stickers are available from the StickLit website and the founders encourage people to download them and use them freely.

One of the most popular posters in Bengaluru includes a quote from a lecture by Salman Rushdie:

Censorship is the thing that stops you doing what you want to do, and what writers want to talk about is what they do. Not what stops them doing it.

The founders encourage placement based on context: poems in railway stations, for example, when people have longer to contemplate them; shorter quotes and excerpts for busy streets. They also use place-specific languages – Hindi in Delhi, or Kannada in Bengaluru – alongside English. There are plans to share prison poetry in prisons as well.

Kundathil, 33, a Bengaluru-based graphic artist, handles the design. He says he deliberately chooses bold, brightly-coloured fonts and minimal design elements in order not just to attract attention but to ensure that attention remains focused on the text. 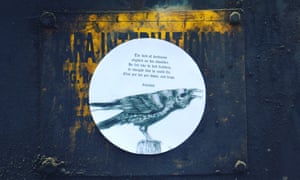 The list of authors chosen is inclusive and diverse, from Rushdie and former government minister Shashi Tharoor to newer voices such as Nishita Gill and Nikhil Mhaisne. They have also shared works of Kannada literary greats across Bengaluru. “A lot of our material consists of work by aspiring writers as well,” Pandey says, adding that the project is open to submissions.

“We like to believe that people, especially the young, are drawn towards StickLit as they are not cynical,” Pandey says. “They still believe that a pen can change the world. And we’d like to foster that.”

Tea and Temples for Personal Travel Managers in Sri Lanka ·

Cruises With the Best Entertainment for Seniors

Travel warning: Amsterdam hit with wave of mail bomb explosions – is it safe to visit?

Should You Travel To A Reopened State?