Home » Travel » Why an everyday English field is my tranquillity base

Last January I started a new part-time job on a landscape scheme in the medieval hunting forest of Cranborne Chase, a designated area of outstanding natural beauty (AONB) that straddles the borders of Wiltshire, Dorset, Hampshire and a sliver of Somerset.

By day it was all chalk, sheep and beech trees, big skies and isolated villages; at night the bright ribbon of the Milky Way arched above, soft moonlight bathing the fields, earning the AONB a Dark Sky Reserve designation. I’d stand in the garden in midsummer blackness, watching the dusty dart of the unromantically named C/2020 F3 Comet (AKA Neowise) while it was visible in the northern hemisphere, and unlocking an old obsession with constellations, our solar system and the Apollo missions.

Cranborne Chase is somewhere I thought I knew well: my first long teenage bike explorations were here – skinny thighs wobbling and burning up the steep hills – and in recent years I have sometimes cycled the same lanes, encountering the bittersweet afterglow of rediscovery. But winter afternoons spent poring over Ordnance Survey maps with my new colleagues, clutching hot drinks and outlining projects, revealed many gaps in my knowledge.

Close to the year’s midpoint I took an hour’s hot bike ride through the lanes of the Chalke valley to Martin Down national nature reserve, where Dorset fringes into Hampshire. If this was work, I liked it. In the car park of the nature reserve, Roland, the team’s ranger, took out his bike from a car packed with the practicalities of his life: strimmers, rope, a hefty toolbox.

We set off along a wide path into the chalky landscape. We had not seen each other since March, and I was too chatty – probably rambling about moon missions. If Roland was bored, he was too polite to say so.

Martin Down is the second-largest area of chalk downland in Britain, and an important wildlife habitat. But this is no pristine wilderness, nor is it conventionally pretty or emblematic of the English countryside, although I thought perhaps it should be.

Naturalist WH Hudson wrote in his 1910 book A Shepherd’s Life that Martin Down was “a wide empty land, with nothing on it to look at but a furze”. The down had been one of my knowledge gaps but as I came to know it through the seasons, from sharp winter lines to summer’s soft fuzz, I wondered if Hudson had been looking properly. 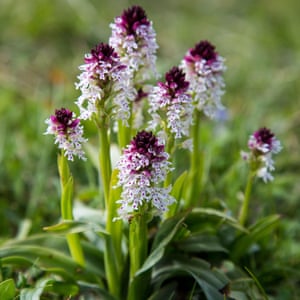 Furze there was, blazing yellow, but there was much more besides.

Viewed from its higher points, the down is a bowl of grassland, crisscrossed with paths, slippery under the bike tyre when rain whitened the chalk. Maybe it’s best to imagine the sort of countryside favoured by period dramas set in the early 19th century, where stagecoaches rumble and bounce over rutted tracks, conveying an anxious heroine to some grand house.

Much of southern England would once have resembled this scrubby landscape. But a closer look, especially in the company of more knowledgable colleagues, revealed burnt-tip orchids, knapweed and small skipper butterflies, the grassland palpably alive.

Here, too, were hares, larks burbling and whistling and, in one magical moment, the not-too-distant churr of a turtle dove.

Over millennia humans left their mark on this land. The Dorset Cursus, now all but lost under fields to the south of the down, is the largest neolithic earthwork in Britain, stretching for 10km in a bow-legged span south-west towards Thickthorn Down, although its purpose remains obscure. 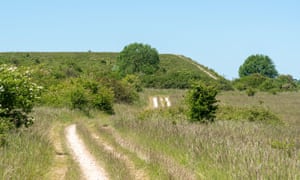 In her book Sightlines, Scottish poet and essayist Kathleen Jamie gently ribbed archaeologists for their free use of “baggy” words like “ceremonial” and “ritual”, but without a more obvious purpose, what else are we left with when confronted with such a huge but vanished structure?

The lower, older section of the Cursus aligned with the sunset at midwinter, and the surrounding barrows were arranged suggestively, so we assume some purpose beyond the mundane.

Even around here the Cursus is little known; its haunting absence, mostly grainy soil marks seen in aerial photography, is compelling. Its northern section terminated close to Bokerley Ditch, also newly incredible to me.

If the Cursus was shy, Bokerley was a brute, a massive iron age defensive ditch and bank refortified by the Romans. In places it loomed menacingly, presumably deliberately, marching up Blagdon Hill and marking the edge of the nature reserve. 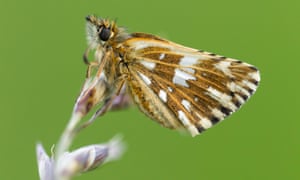 War and its threat seemed close on Martin Down. Not far from Bokerley Ditch was a huge bank – a rifle range made for training first world war Tommies and later pressed into service again for the fight against Hitler. It’s now nibbled by sheep which, I presume, occasionally spit out a bullet.

Roland and I made our way south, the ghostlines of the Cursus sunk in the land to our right, and on to a narrow path by a long, thin patch of woodland to our left, its low boughs occasionally making us duck and weave. It was still hot, but rain was threatening. Cycling the gentle slope we came to a parting in the trees and stopped to consult maps.

Suddenly, and with some force, it began raining, the cracking sky emptying weeks of rain in minutes. We folded our maps, pulled out waterproofs, munched squashed sandwiches and retreated a little more under the tree cover, where only occasional drips found the space between necks and clothing.

Roland pointed out that recent forestry work had removed the conifers, leaving native trees and revealing some modest lumps and bumps which might have been barrows or part of the ancient Grim’s Ditch complex, elsewhere rubbed out by the plough.

But I was still talking about the Apollo missions, specifically the photographs taken on the moon. These were some of the most recognisable images of the 20th century: from the prints left by astronauts’ feet on the lunar surface to the huge, beautiful desolation of the landing zone and, of course, “Earthrise” – the moment of the fragile Earth’s milky elevation above the dust-scape, a turning point in the way human beings see ourselves, maybe.

Semi-solo hiking brings me the gift of time alone, and the joy of reuniting

As the rain slackened we pushed our bikes along the muddy path that led through the narrow stand of trees, emerging into light. Opening before us was a large field of a pale-green crop – which we later identified as unripe oats – cut through with a neat, straight path leading to more woodland; trees also fringed the field to our north. To the south the land rose to the horizon, meeting a greasy napkin sky.

Some places have something. In 2006 the CPRE (formerly known as the Campaign to Protect Rural England) commissioned a Tranquillity Survey, attempting to pin down sites that had a sense of peace, calm or isolation, and map England’s quiet spots, county by county. When out and about, our little team had been looking for places that had that special quality, as a focus for future projects.

Arriving at this insignificant spot on the edge of a field a small distance from the wonders of Martin Down and identifiable only by an OS grid reference, Roland and I recognised it immediately. But its essence remained unquantifiable and, for me at least, indescribable.

Others summon with ease the spirit of mountains or Paris, deserts or Trieste, but I couldn’t conjure the unexpected intensity of this ordinary field margin. Later I searched books for some significance to this spot but could find nothing. 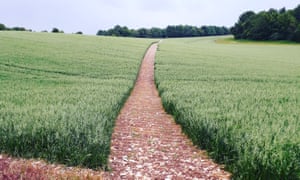 We swung our legs over crossbars and began the slow grind up the path through the field. My front wheel wobbled, the back wheel span on soft earth made softer by rain and the chain slipped off. A pedal made sharp contact with my shin. The crop provided a soft landing and the fall provoked only a surprised chortle from me.

My favourite place among the trees

Roland, further ahead and more competent in the saddle, didn’t notice. For a few seconds, while lying on the bent stalks, I let myself imagine the spirits of the Grim’s Ditch diggers watching me, or the Barrows’ dead up and about, or the ghost warrior of local legend galloping over my tangled limbs and slowly turning wheels.

These thoughts were easily banished as there was something more profound here: my own tranquillity base, just a few miles from home, the haunt of no one.

The rustle of the leaves above in a high summer shower, the pulse of heat, the wet shimmer of the crop, all left an imprint on me long after the bruise had faded from my leg – something found and always mine.

This was something of a revelation. I am usually wary of nature cure blandishments. The natural world isn’t here to provide us with solace, but sometimes it does so anyway.

It was anonymity that lent the place personal wonder, these seconds as precious as the turtle dove’s call or the lark’s tumbling cascade of song. I have not returned to the spot since, but still I feel the strange, quiet, pull of a small copse and a field near nowhere – a modest still point and turning point, comfort and retreat.

• This article first appeared on the Caught By The River website. Jon Woolcott lives in north Dorset and is writing a book about southern England; follow him on Instagram. Further information on Cranborne Chase AONB