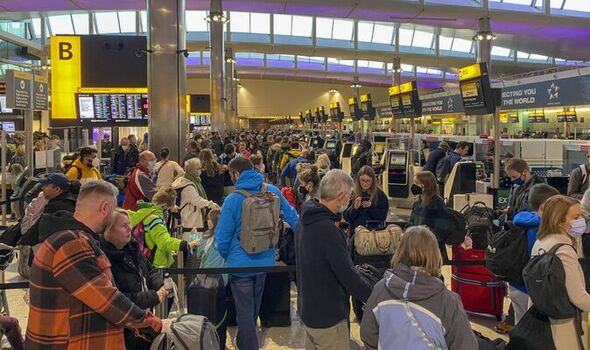 There is strong concern that not enough Border Force staff will be in place during the all-important summer tourism season.

Airports in the UK and around the world were hit with long queues and flight cancellations during the Easter holidays and Ms Patel has been presented with a raft of recommendations to improve services.

Conservative MP Henry Smith, who leads the cross-party Future of Aviation group, warned Ms Patel that the sector’s post-pandemic recovery is being “held back by staff shortages at all levels”.

Karen Dee, chief executive of the Airport Operators Association (AOA), confirmed that “queues at the border are a real concern”. It is feared that such delays will “undermine people’s willingness and confidence to travel”.

In a letter to the Home Secretary, Mr Smith states that the industry suffered “devastating loss and financial difficulty” during the pandemic and expresses concern at claims the “Border Force may still be some 250 officers short by summer 2022”.

He wants the Government to take action to speed up passport control and avoid further problems with electronic security gates. Last year there were major queues at Heathrow, Manchester and Edinburgh airports following an IT failure.

Mr Smith is pushing for improvements to the software used on “eGates” to “prevent national outages”. He wants engineers based on-site at each terminal at peak times to ensure the system keeps working.

The Crawley MP also wants children under the age of 12 to be able to use eGates.

Ms Dee of the AOA stressed the importance of getting the right measures in place.

She said: “The border is our welcome to the world, whether for people returning home or visitors to the UK. It is vital that, following the pandemic and Brexit, the UK puts its best foot forward at the border and shows we are once again open for business.

“With ongoing resource constraint in Border Force, queues at the border are a real concern this summer. This could undermine people’s willingness and confidence to travel, so shortly after a pandemic that devastated UK aviation.

“Airports are working closely with Government to ensure that Border Force is doing everything possible to prevent this and we welcome Henry Smith MP’s intervention, which we hope will focus minds.”

A Government spokeswoman said: “The safety and security of the public is of the utmost importance and we continue to work closely with airports to minimise passenger wait times and deploy staff where they are needed most.

“This approach is working, as despite Easter being one of the highest periods of inbound travel from the past two years, Border Force were able to successfully deliver a secure and effective border control with little to no disruption to passengers.”

The number of Border Force staff has increased by three percent to more than 9,300.

The Government claims Britain has “one of the most efficient borders in the world” and states it is working to learn from past incidents and is “committed to making sure all passengers can have the safest and most hassle-free journey possible”.

Most powerful passports in the world mapped – how strong is the British passport?