Home » Travel » Beyond Shakespeare: a meander around Stratford-upon-Avon

Stratford-upon-Avon is world famous, thanks to a certain Elizabethan playwright. I have spent years visiting family here, and finally moved to the town last summer, partly to escape from London rent, and partly for the promise of more space, more air, and more walking. For a small town, it’s a remarkable place for meandering walks that take you from town to country and back again in the turn of a corner or two. You can get lost among chocolate-box Tudor buildings and down pokey alleyways, around the canal, over the twists of the River Avon, through allotments and meadows, past Victorian mansions and houseboats and new-build estates.

The town has found uses for old paths. Part of what was once a horse-drawn wagonway is now the Tramway, and forms a bridge and busy tree-lined walk away from the town, flanked by a pub, sports centres and playgrounds. Cross the Avon near the Holy Trinity Church, the picturesque resting place of you-know-who, and you can wind down to the Greenway, which was part of the Honeybourne Railway, until it closed in 1976. Now, it is a popular path that stretches for five miles, all the way to Long Marston, and part of the West Midlands Cycle Route, linking Oxford and Derby via Birmingham. By and large, there is a respectful co-mingling of bikes, dogs, pushchairs and people. 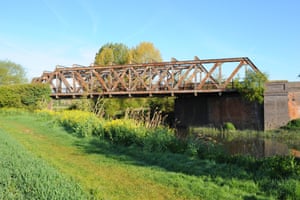 If you start to walk in town, then the contrast between the Avon where it is wide and busy with boats and swans and tourists, and the wilder parts that wind past and through the Greenway, is remarkable. On the Stratford side, the Greenway begins now with Bobby’s, a new-ish cafe in a striking old railway carriage that serves some of the best coffee around.

The path soon reaches the racecourse, and if it’s race day, and the timing is right, the horses might gallop past, close enough to startle with their noise and power, like thunder rolling in. There is farmland across the way, and cows in the distance, and sheep and lambs closer, depending on the season. Sometimes you can hear the skylarks, if you know what you’re listening for. It is town and country, all in one.

The 10 most popular cathedrals in the UK – do you have one near you?