‘Have you noticed anything?” my guide Jonathan asks me.

We stop for a moment. There’s a lot to notice. I gaze across meadows speckled golden with buttercups. Dry-stone walls carve the fields into tiny fiefdoms, each with its own stone barn. The low hill we’ve just descended is washed by a panoply of greens. Somewhere above us a skylark is singing its little heart out in a worthy attempt to fill the broad valley with song. Nothing strikes me as untoward.

“We’re the only ones here,” says Jonathan. “We’ve hardly seen anyone all day, have we? I find it so frustrating – there’s all this beauty and yet there’s almost no one here to enjoy it.”

And he’s right. For two days, Jonathan Smith – a local walking guide and author – has taken me up and down some extremely attractive hills and vales in the Yorkshire Dales national park – in glorious weather, and yet we’ve seen very few other walkers.

Slim of limb and silver of mane, with more than a touch of Arsène Wenger about him, Jonathan is on a mission to get people exploring beyond the famous Three Peaks (Ingleborough, Pen-y-ghent and Whernside). To that end, he guides walkers around the lesser-known dales; runs navigation courses to give hikers the confidence to get off the beaten track; and has written a book – The Dales 30 – a guide to mostly circular walking routes to the top of all 30 of the park’s 610-metre-plus hills. He’s one of a hiking elite who have climbed all of Scotland’s 282 Munros (peaks above 914 metres) but dreamed up the Dales 30 as a “more doable challenge” achievable by anyone who can climb a hill.

I like to think I’ve done my share of thigh-testing ascents around Britain. But I found I could claim a mere three of the Dales 30, so on our first day, Jonathan takes me to Upper Wharfedale to add a fourth – his favourite hill, Buckden Pike.

“It’s a proper hill,” he says. “It has a proper summit and yet it’s a fairly gentle climb along a path of lovely springy turf.” 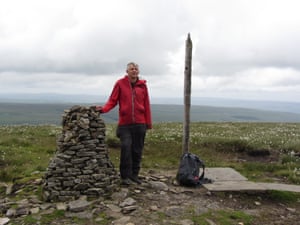 It also provides magnificent views from its 702-metre top. Jonathan pointed out all of the Three Peaks, and a host of hills and ranges beyond. We made a short pilgrimage to a Polish war memorial – commemorating a 1942 plane crash – before slipping back down to Buckden village on another flank, passing long-abandoned lead mines and soaking up views of Upper Wharfedale. We’d walked five miles, but it felt like we’d explored a new little world.

I spent the night in nearby Kettlewell. Protected to the east by the dramatic bulk of Great Whernside (another of the Dales 30, with a footpath right to the top), it’s preposterously picturesque. It feels as if its stone cottages, elegant church, plashy stream and venerable pubs have been ordered by a movie mogul who called for the finest points of every Dales village to be condensed into this one. I slept at the friendly Zarina’s B&B, in a low-beamed bedroom that felt like a set from Kettlewell’s exquisite film. 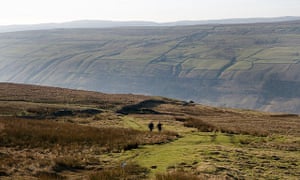 Next day we conquered mighty Birks Fell (607 metres), on a seven-mile walk in two lesser-known dales. Beginning at Hubberholme – little more than a pub, a church and a farm – in Langstrothdale, we followed the River Wharfe to Yockenthwaite, with its Monet-esque hay meadows. We climbed the sinkhole-pocked Horse Head pass and down into deserted Littondale, pausing for a drink at Katie’s Cuppas – a self-service/honesty-box cafe at Halton Gill. Rolling happily along the bank of the Skirfare, we passed through pretty Litton village and on to the steep bridleway for a full-frontal assault on Birks Fell.

Back at Hubberholme, the sun was well over the yardarm, so we had a pint at The George – favourite watering hole of playwright and author JB Priestley and the sort of tiny, remote, characterful pub it’s hard to believe exists any more.

Why, I wondered, doesn’t Jonathan want to keep such choice spots to himself.

• The trip was provided by where2walk.co.uk: a day’s guiding for up to 10 adults costs £180 (dogs and kids welcome). Accommodation was provided by Zarina’s (doubles from £85 B&B)

Looking for a holiday with a difference? Browse Guardian Holidays now to find a range of fantastic trips

Department of Transportation Announces Flights Between the U.S. And China Can Increase

The Underground at The Mob Museum announces Holiday "Cinn-City" ·