Home » Where to stay » Walking in Benjamin Britten’s footsteps, Suffolk

Just a few yards separate the doors of Snape Maltings from the Alde marshes. They pass from modern concert hall to utter serenity. Music and place do not always make happy partners, but the music of Benjamin Britten is infused with this Suffolk coast. I once heard the high-pitched chords of his Sea Interludes drift out of a rehearsal and settle among the reeds rustling in the water, in perfect harmony with nature.

The walk from Snape to the seashore at Aldeburgh is a walk through sound. The old malting barns were used for drying beer barley until 1965, when Britten realised they would make an excellent concert venue. Despite their going up in flames on the opening night in 1969, they have become an enclave for the study and performance of music. They sit isolated on the Alde estuary, surrounded by salt marshes, reed beds, heather heath and wide Suffolk skies. For scenery, I normally prefer the restless contours of western Britain, but here is East Anglia’s response. As Graham Swift says in his 1983 novel, Waterland, it is a landscape which “of all landscapes most approximates to nothing”. It is not a place of dramatic hills and vistas, rather the slow accumulation of sensory enchantment.

The view towards the sea from the Maltings terrace is of a river delta, meandering between reeds and tidal mud banks. The walk should start with a wander along the paths directly in front of the concert hall, where the grasses whisper and the curlews call. On rising land to the south, the only sign of habitation is Iken church tower, standing on its promontory as it has since the middle ages. 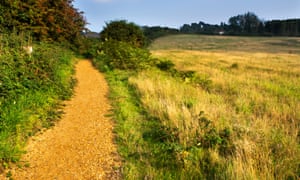 The six-mile path along the estuary to Aldeburgh is named the Sailors’ Path, from the route taken by mariners between Snape village and the beach at Aldeburgh. It starts over the bridge next to the Maltings, initially along the river’s northern bank, which would have been Britten’s “walk to work”. Now in the care of the RSPB, this is a land of water birds, of redshank, avocet, lapwing, snipe and, overhead, the occasional marsh harrier. But it is the cry of the curlew that most evokes Britten’s ear, inspiration for his mystic oratorio, Curlew River. His strings, which can often seem thin and cold in the concert hall, here seem the ideal accompaniment to scenery.

The path detours round the edge of Snape Warren nature reserve, with views back to the Maltings. In an early mist their distinctive chimneys float like clipper ships, with gulls curving round their topsails. The warren itself is a wilderness of heather and scrub oak, giving into carefully rewilded woodland. We rejoin the Sailors’ Path and plunge into Black Heath wood, predominantly silver birch and part of an Area of Outstanding Natural Beauty, continuing until we reach the road into Aldeburgh. 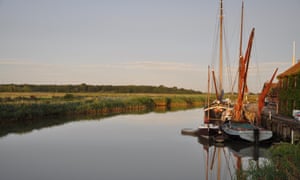 A detour north by the golf course leads into the town by way of the Red House, Britten’s home with his partner Peter Pears for the last 20 years of their life together. It is open to the public, with a small library and exhibition space (open March to October, £5.50, under 16s free). Aldeburgh church contains one of John Piper’s finest windows, in memory of Britten. The church is a venue for concerts in the Aldeburgh festival, which he and Pears founded.

Unlike the bucket-and-spade resorts of England’s south and west coast, East Anglia’s settlements are places apart. They seem to be still wrestling a living from an unyielding sea and blasted by an east wind. Aldeburgh had no harbour, just the steep slope of its shingle, guarding the old high street from the sea like a defensive rampart. This beach runs over a mile from the outlet of the Alde north to the smart resort of Thorpeness and is itself a classic maritime walk. In the far distance lurks the indelicate outline of Sizewell nuclear power station. 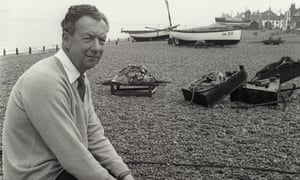 A few remaining fishermen’s boats are still dragged up on to the shingle, where storage huts maintain a dogged presence. They bring us back to Britten. His opera, Peter Grimes, was set in part on this beach, and in 2013 was even performed here. At dusk we can imagine the lonely, angry Grimes, accused of murder by the townspeople, stamping across the stones, torn between the scorn of “the borough” and the tempestuous sea. Britten’s surging music echoes the ebb and flow of waves on the shingle. It forms a disturbing contrast to the soft cadences of the Alde marshes behind us.
• The 2019 Aldeburgh festival is on 7-23 June, snapemaltings.co.uk

Festive gift guide: The best presents for your favourite globetrotter

Tourists flocking to Sunshine Coast according to new data ·