With the help of the folks at Goway Travel, I recently spent eight days in South Africa, an amazingly diverse destination with cosmopolitan cities, country houses surrounded by vineyards, and sleek safari lodges.

My headquarters for three nights in Cape Town was the posh Victoria and Alfred Hotel, which is located on the bustling V and A Waterfront. Many of the rooms offer views of the beautiful harbor and of Table Mountain, one of the world’s most recognizable landmarks.

The rooms are lovely, large and understated, with some exposed brick walls and colorful architectural bits. My room had a great bed, an enormous shower, a separate tub and very good work space; always an important factor on the road.

The breakfasts are spectacular, with everything from omelettes and egg dishes to a buffet featuring sparkling wine, oysters, smoked meats such as ham, prosciutto and chicken, roast beef, as well as local cheeses. If that’s all too much for you in the morning, you can always keep it simple with yogurt, fresh fruits, flaky croissants and cereals. 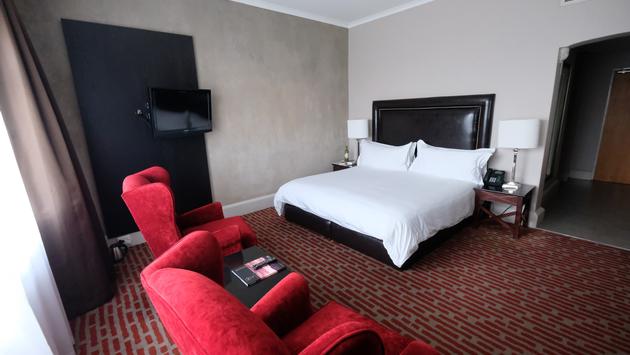 On top of that, the views of the harbour and Table Mountain from the breakfast space are marvellous.

The hotel is directly connected to a fine shopping arcade, with shops selling beautiful jewelry, African crafts and other items. There’s an upscale food market next door, with everything from tacos to Southeast Asian cuisine and a shop specializing in tasty, South African dried meat, or “biltong.”

You’re also close to a lovely shopping area/work-sharing space and the Cape Town Aquarium. The Cape Wheel, a massive Ferris Wheel with enclosed viewing pods, is just steps away from the hotel, as is a massive, indoor shopping mall with dozens of shops and a ton of restaurants, most with outdoor patios. 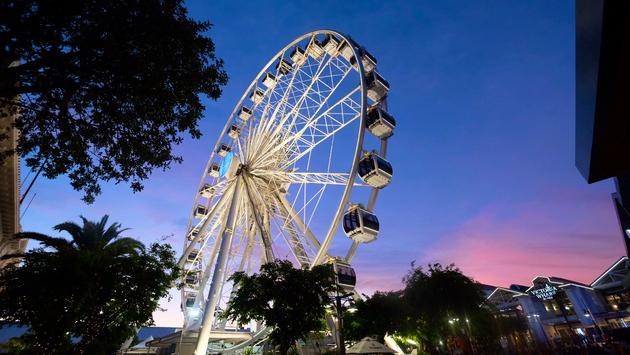 From Cape Town it’s only an hour and a few minutes drive to the Winelands region, where I stayed at a wonderful hotel/resort called the Franschhoek Country House and Villas, with spectacular food and comfortable, spacious rooms. The Winelands are a stunning part of South Africa, with rolling hills dotted with pale green vines in spring (I visited in October, which was early spring in the southern hemisphere) and spiky, jagged mountains all around that I hadn’t expected. As a California native, I felt like someone had taken the vines of the Napa Valley and surrounded them with the towering mountains of Palm Springs.

Franschhoek Country House and Villas feels like a south of France/Mediterranean resort, with several pretty fountains and two swimming pools; one cold and one heated.

My villa room was immense and nicely decorated, with a large patio and a bathroom big enough to hold a small convention. We had a large living room with a coffee-maker, mini-fridge, fireplace, sofa and chairs, a small table. There was also a large bedroom with a small table and a second balcony. The room also had terra cotta floors, flowery paintings and exposed wooden beams/supports for an upscale/country feel. 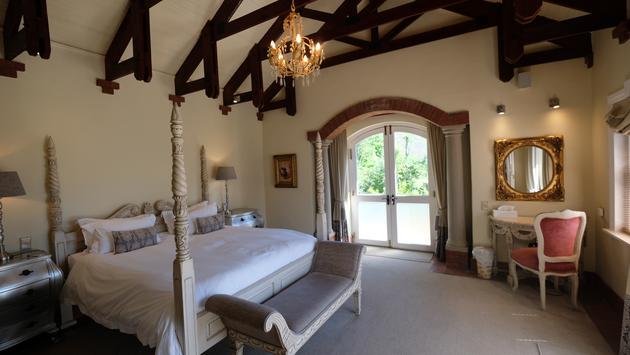 I didn’t know what to expect at the on-site restaurant, called Monneaux. But I was blown away by a meal as good as any I’ve had in the world. The ingredients were interesting, the food divine and the presentation exquisite.

Head chef Calvin Metior worked for five years in London and loves the cuisine in Copenhagen.

We started with an exquisite serving of salt-baked celeriac, which was soft and tender and served with wild, pickled garlic.

“I really enjoy working with vegetables,” Metior told me. “We get them fresh from just down the road; giant carrots and other great produce.”

I later sampled an amazing bonito tartare with cured sesame lime dressing that’s covered with a blanket of ginger and seaweed. Metior gives it a nice wasabi kick, too.

Metior makes his own guanciale and pancetta and breakfast sausage. His pork shoulder is brined for 24 hours, cooked sous vide for 12 more and then finished in a flaming hot pan. It is to die for; smoky and sweet and tender. 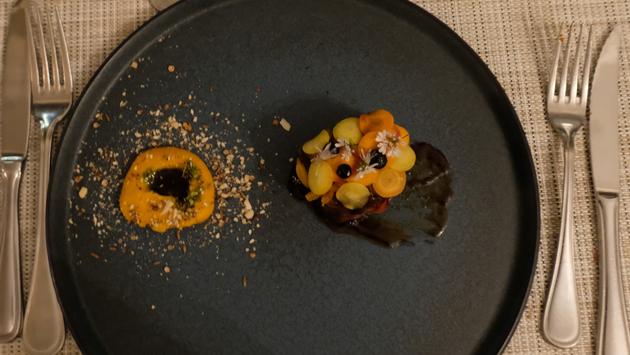 His beef short rib is smoked in hay for two hours and melts before it even hits your fork.

For dessert I sampled a raspberry dish with layers of meringue and white chocolate; a frenzy of pink and red deliciousness.

The top price I spotted on the menu for a main course was lamb, and it was listed at just over $14 US dollars. On top of being a wonderful place to visit, South Africa also is quite cheap for American tourists.

For breakfast the next day I tried Metior’s “breakfast in bread,” which featured chorizo, pork sausage, onions, peppers, tomato and cheddar. Yum. If you’re not that into breakfast meat, you can try local fruits, croissants, yogurt, Eggs Benedict or Belgian waffles.

The Franschhoek Country House is on the outskirts of the town, but there’s a coffee shop and grill next door and several wineries within walking distance. The hotel has a free shuttle that takes you into town in just a minute or two, and you can rent bikes from the hotel if you like. It’s only about a 15-minute walk, most of that on a protected, pedestrian walkway set back from the road. 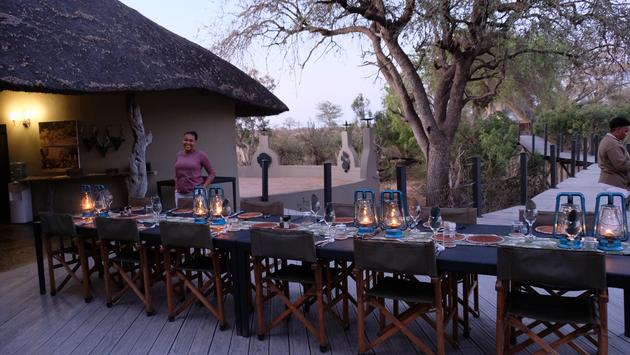 The safari portion of the trip was a three-night stay at Kambaku River Sands, a luxurious but not over-the-top lodge that’s part of the Timbavati Nature Reserve. Timbavati isn’t technically part of South Africa’s Kruger National Park but it’s adjacent to it, and there are no fences or other barriers between the reserve and the park. It’s a private reserve that I was told was owned by a few dozen individuals.

There also are no fences around the lodge, so it’s quite common to have animals of all kinds traipsing about. They’ve built a small watering hole near the lodge, so you’ll often see elephants, zebras, giraffe, water buffalo and other animals coming in for a drink. Elephants sometimes come up to the swimming pool and dip their trunks in the water, even when guests are sunning themselves or going for a dip.

You’ll find only a handful of units in all, nicely spread out on a flat bit of ground. They’re all quite spacious and beautifully decorated, with a large bed surrounded by mosquito netting (not an issue when I was there, October being dry season in this part of South Africa), comfy chairs, a large deck, a kettle, a fridge that’s stocked with free water, soda and beer. The bathroom was larger than some hotel rooms I’ve stayed in, with a stand-alone tub, double sinks, a separate toilet room and a shower, plus a fabulous outdoor shower (in case you want to put on a show for the elephants). 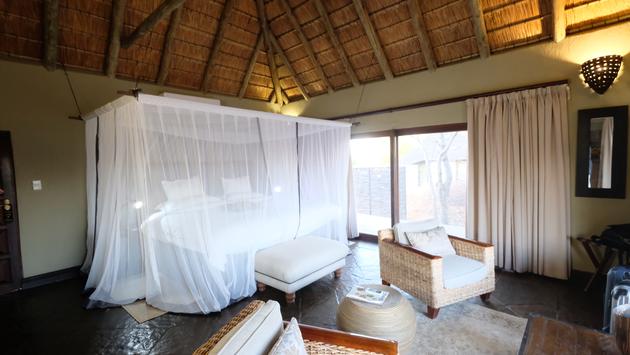 The routine is pretty much the same every day. Someone knocks on your door at 5 a.m. so you can get dressed and wander down to the lodge for a cup of coffee and a biscuit. Because many of the animals that folks want to see the most are nocturnal, including lions and leopards, you’re out the door and in the jeep by 5:30 a.m. so you can see the animals while they’re still (potentially) active.

The morning safari goes on for roughly three and-a-half-hours, with 30 minutes taken out to enjoy more coffee, biscuits, fruit and muffins out in the wild. You’re back at the lodge by 9 a.m., and a full breakfast is served around 10, with eggs, cereal, bacon, yogurt, salads, made-to-order omelettes and more.

They serve an afternoon tea with snacks in the mid-afternoon to tide you over (think pizza, veggies and other light bites), and then it’s back out in the late afternoon for a few more hours in the cooler weather. You’re usually back at the lodge shortly after sunset, with a fine meal served in the open-air lodge around 8 p.m. 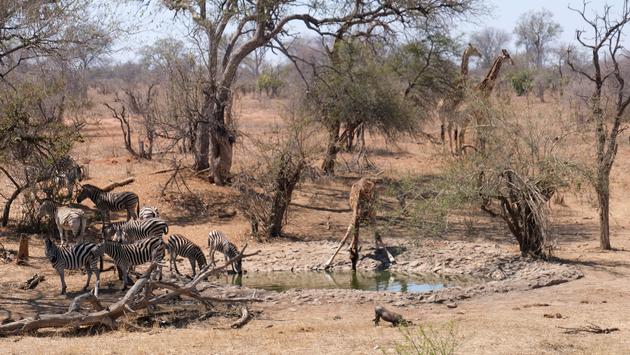 I had two dinners under cover at the lodge, and one of them outside near the watering hole, with bonfires at each end of the table and a wonderful view of the stars twinkling in the southern sky. As I was tucking into dessert, a group of elephants sauntered up to drink from the pool. Earlier, a black and white civet – kind of like an African raccoon but longer and more like a cat – slunk past our table.

There were usually three choices for dinner, including vegetarian options, and I had everything from duck to chicken to lovely steaks, along with great South African wines that are included in the price.

A Canadian couple who were on their honeymoon were treated to a private dinner one night in the wine cellar, which is quite cool and lovely. The lodge also has a spa/fitness centre and a wedding chapel.

WA on display for international travel agents at Corroboree West ·

5 Reasons Why Monaco is the world's unofficial sporting capital ·