Home » Where to stay » Taking flight: an Isles of Scilly family holiday adventure

With a single space that combines cafe, check-in and departure lounge, tiny Land’s End airport is a kind of anti-Gatwick. Last week, during the half-term holidays, the closest it got to frantic was a buzz of interest in the departure lounge as the newly reinstated helicopter, the first to link the Isles of Scilly and the mainland since 2012, was wheeled out like an oversized dog on a morning walk. There’s something about a helicopter that inspires a kick of childish joy and the 20-minute flight to St Mary’s was, if anything, over too soon. From the air, the islands appeared more like my idea of the archipelago in Ursula Le Guin’s Earthsea novels than anything I expected to see 30 miles off the UK coast.

And despite being so close to our home county of Cornwall, Scilly feels quite different from its mainland cousin. The islands are wilder and feel much more isolated, surrounded by the protective labyrinth of just-submerged rocks, responsible for the countless wrecks that line Scilly’s seabed.

This isolation was perhaps responsible too for the tangible gear shift we felt when we arrived. Life here is guided by the tides and hence the boat schedules that serve the islands. While the helicopter gets you there in the time it can take the kids to tie their laces, once you land everything slows towards an ambulatory pace. It’s not surprising. There are few cars here (none on some islands) and with the largest island, St Mary’s, only 2½ square miles, the four of us slowed to strolling pace, or slower still to peer into rock pools. And when we really got into it, we stood listening to birdsong made more obvious by the lack of background noise. 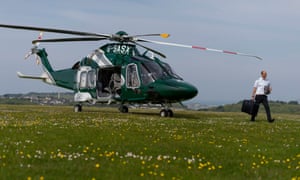 Even our ever-moving son, aged five, stopped to spot puffins, guillemots and razorbills from the deck of the guided tour boat which took us out to the lighthouse on Bishop’s Rock, the archipelago’s westernmost outcrop. He and his eight-year-old sister have a low tolerance of activities that don’t deliver but for the hour and a half afloat they were rapt. The whole of Scilly is a designated area of outstanding natural beauty, and the Wildlife Trust is active throughout the islands, running regular wildlife tours as well as free activities for children throughout the summer.

A more novel way to get close to Scilly’s abundant nature is to snorkel with seals off the protected Eastern Isles, close to St Martin’s. Encased in neoprene I lowered myself into the water, half hoping the seals would keep their distance. However, when they appeared, skimming beneath and performing submarine acrobatics, I was utterly entranced, and when the children are a little older, I know they will be, too. 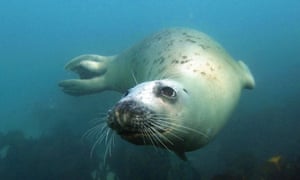 The jumping-off point for our Swallows and Amazons-like adventures was a family room at the newly opened Longstone Lodge on St Mary’s (we later moved to a tent pitched just metres from the sea at Troytown Farm campsite on St Agnes). Inspired by a love of backpacking, islander Amy Hiron built Longstone, Scilly’s first hostel, with her sister and husband on the site of a former shipwreck museum. “We wanted to create something that Scilly doesn’t already offer, as an affordable alternative,” she said as we sat outside the hostel’s cafe and the children played in the gardens.

The hostel’s rooms range from a six-bed dorm to bright and simple twins and singles. And after a long day on the go, Hugh Town-based Tanglewood Kitchen delivered fish pie and lamb hotpot, which we heated in the hostel’s communal kitchen while sharing stories with the other guests, a mixture of families, couples and solo travellers, many of them life-long devotees of the islands. 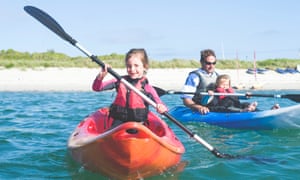 One explanation for this devotion is that the islands remain remarkably quiet and uncrowded, even in the school holidays. “Outside the annual pilot gig championship weekend [boat races in traditional craft] in early May, the islands never get that busy,” Amy told me.

We found a deserted stretch of white sand within a 20-minute walk of the hostel, where the children struck off on their own to search for gems (or, for the less imaginative, beach glass) while my wife and I combed the shore for cowries.

As with all islands, you’re missing at least half the picture if you only see it from the land. I took a kayak out from St Agnes Watersports and made for the tiny golden crescent of Porth Askin beach, a mile or so distant. When I got there, the headland was deserted and the sea irresistible, so there was nothing for it but to strip off and dive into the clear, and exceptionally cold, water. The paddle home warmed me up and when I got back I was more than ready for the enormous portion of fish and chips at the Turk’s Head pub in St Agnes. 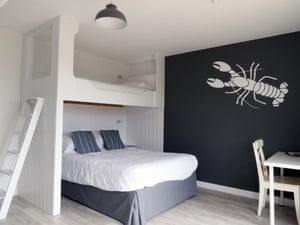 And if that wasn’t remote enough, it’s possible to have a whole island to yourself if you’re prepared to paddle for it. Armed with a map and another kayak, this time from Higher Town Quay on St Martin’s, I set off to explore the neolithic ruins on the uninhabited island of Nornour, again in the Eastern Isles. It’s incredibly rare to be truly alone, but for the hour I was there, the only other sound was that of the sea birds and the breeze in the grass.

When we returned home, we took the slow route on the Scillonian ferry, shattered and happy, with pockets full of sand, and the feeling that we’d been away far longer than the five days it had been.

Getting there
Island Helicopters flies from Land’s End to St Mary’s from £215 return. The Scillonian III ferry sails Penzance to St Mary’s from spring to late autumn (every day except Sunday) from £90 return. Small planes also fly from Exeter, Newquay and Land’s End. All bookable through islesofscilly-travel.co.uk.

Where to stay
A four-bed room at Longstone Lodge costs from £96 a night; beds in the six-bed dorm (with shared en suite) from £24. Troytown Farm campsite costs £10pp per night (child from 1-4 years old £5.50) and from £2-£8 per tent per night; bell tents sleeping three or four cost from £63 per night.

• Wyl Menmuir is the author of The Many, published by Salt; it is available for £7.64 from the Guardian bookshop

BA Holidays: The top five beach hotels to head to this summer summer