Nobu Hotel Los Cabos cut the ribbon this week on a 200-room minimalist-design property on the Pacific Ocean at the bottom of the Baja Peninsula.

The property, one of nine in the A.I.C. collection and the second Nobu under that partnership, has been in operation since April but had its official opening celebrations yesterday in anticipation of more to come.

The larger Nobu Hotel brand is rising fast with some 19 more properties in the pipeline, with locations in key cities such as Chicago, Tel Aviv, Atlanta, Riyadh, Sao Paulo, Toronto and Warsaw.

The first Nobu Hotel opened as a hotel within a hotel at Caesars Palace in Las Vegas in 2013.

Three top personalities cutting the ribbon remain at the root of every Nobu, regardless of partnership arrangements or purpose.

Robert De Niro, Meir Teper and Nobu Matsuhisa pull the company together with a philosophy that includes an attention to detail that one would expect from a master of Japanese culinary traditions, the imagination one would find from a film producer and a focus on service one would presume from one of the world’s foremost film stars. 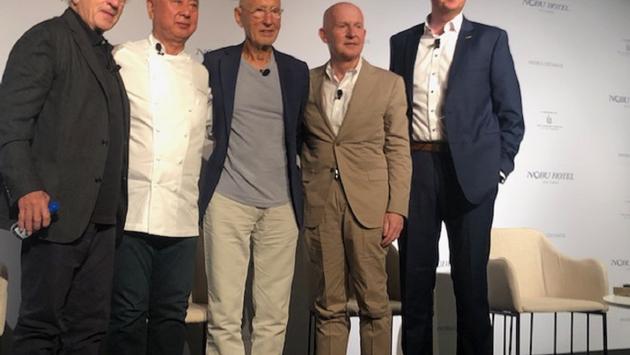 “It’s our first hotel in Latin America and Mexico and it’s a very exciting time for us. Today everybody knows what the Nobu brand is. We started the company 25 years ago and we’ve grown to a company that now has the restaurants, as well as 19 more hotels currently in the pipeline. It’s amazing what we’ve accomplished as a company – I am not sure anyone has been able to build what we have on the foundations of what started as a very exciting food and beverage experience,” said Trevor Horwell, CEO of Nobu Hospitality Group.

Food at the Forefront

The Nobu in Los Cabos centers around food and relaxation mostly. It is located about 25 minutes from the town of Cabo San Lucas, where a plethora of restaurants, boutiques, shopping malls, bars and partiers are to be found. But most guests stick to the hotel.

Even when crowded or full, a delicious quiet is ubiquitous around the 14-acre property. For restless souls, the Hard Rock Hotel, also an A.I.C. property, obliges wanderers with 639 rooms and rock star suites, eight restaurants, five swim-up bars and six pools, three lounges and a bowling alley.

But guests of Nobu might want to stay put and enjoy the open breezes and quiet comforts of Malibu Farms or the rolling beachfront deck of Nobu for possibly the freshest farm-to-table and live-to-plate dining experiences south of San Diego.

The 97 standard rooms and 103 suites face the ocean or golf course (the property is one of only a few in Cabo San Lucas that open onto a golf course. Nobu Hotel Los Cabos is located adjacent to the Diamante Cabo San Lucas Resort complex designed by Davis Love III and Tiger Woods – green fees start at $320), or may look out on a meandering pool scene that could be mistaken for a Japanese garden. 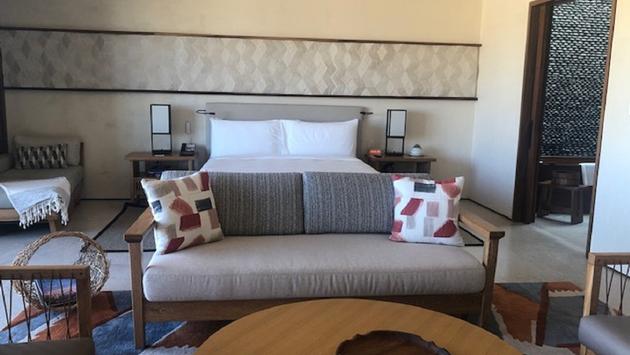 All rooms have patios or terraces, and some come with private pools. Signature amenities include the following:

Accommodations span 11 categories, starting with the 514-square-foot Deluxe Room with one king or two queen beds, up to the 2,628-square-foot Nobu Suite Ocean Front with two king bedrooms.

The hotel is not without its wellness focus. This includes a 13,691-square-foot spa with 13 treatment rooms. Special amenities to be found are the indoor hydrotherapy areas, an outdoor hydrotherapy garden, co-ed lounges inside and outside, a water circuit, experiential shower, cabana jacuzzi, outdoor shower, plus a steam room and sauna. 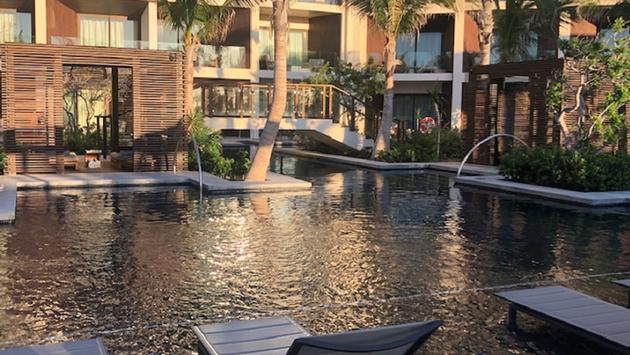 Meetings and events also have their place in the sun at Nobu with 14,389 square feet of space that breaks down into 11 flexible meeting spaces, including two ballrooms, a boardroom, pre-function space and outdoor terraces and lawns.

However, the wide-open spaces of the hotel provide plenty of creative event spots, including breakout places that center around fire pits, marble platforms abutting the beach or function space near the pool.

Nobu is not an all-inclusive as is its HRH neighbor. The property does offer a day pass to all-inclusive conveniences of the Hard Rock Hotel for $150 per person until 6 p.m. (or $200 for stays after 6 p.m.).

Prices for a la carte meals do run on the high side at Nobu. For instance, expect to pay $22 for a lunch of two catch-of-the-day fish tacos. But they will be delicious and intricately crafted fish tacos as one would expect from a bistro under the Nobu moniker.

Access to Nobu Los Cabos is through Los Cabos International Airport (SJD). It’s a 45-minute drive from there to the Nobu Hotel. Rates run $100 each way for a four-person van operated for the property and upward for private VIP transport.

For more information, contact a travel agent or visit LosCabos.NobuHotels.com.

These are the world’s safest aircraft

Baby Born on a Plane Over the Middle East