Home » Where to stay » Dubai travel tips: Where to go and what to see in 48 hours

There’s more to Dubai than its glitzy array of glamorous hotels and the ever-growing number of skyscrapers that shape the city skyline. Scratch the surface and you’ll uncover its authentic Emirati soul.

The airport is situated four kilometres north-east of the city centre and can be reached on the Metro (rta.ae) – the world’s longest driverless railway – between 5.50am and midnight. The red line runs from the airport to the city, stopping near most hotels, while the green line circles the Creek.

Seated on the shores of the Arabian Gulf, Dubai’s arterial Sheikh Zayed Road links the modern districts – DIFC (Dubai International Financial Centre), Downtown Dubai and the Business Bay – with the old towns of Bur Dubai and, across Dubai Creek, Deira. Offshore are the man-made islands of The Palm and The World.

Tourist information booths are located in the city’s shopping malls and there is also one inside Airport Terminal One (open 24 hours; dubaitourism.ae).

The brand-new Four Seasons (2) at Jumeirah Beach (00 971 4 270 7777; fourseasons .com/dubaijb) is an elegant option with cabana-lined pools, the largest standard rooms in town, a spa, and rooftop bar with unparalleled views of both the Gulf and the Dubai skyline. The hotel has an opening offer starting at AED2,244 (£423) for a double, room only.

For intimate lodgings, the boutique XVA Art Hotel (4) off Al Fahidi Street, east of the Grand Mosque (00 971 4 353 5383; xvahotel.com) has 13 en-suite rooms with white-washed walls arranged around a leafy courtyard that plays host to an award-winning vegetarian café and modern art gallery. Doubles from AED900 (£170), with breakfast.

Click here to see a bigger image of the map

Eschew the predictable: instead of taking the lift to the top of Burj Khalifa (5) – the world’s tallest building – skip the queues and the AED200 (£38) fee and take to the waters of Dubai Creek instead. You’ll get a sense of where the city started life. It’s traversed by wooden abras (water taxis) ferrying passengers to Deira for AED1 (20p) one-way, or they can be chartered for AED50 (£9) per hour. They depart from 3A Street, near the entrance to the gold souk (6). The Creek is being lengthened, at a cost of AED1.76bn (£330m), to rejoin the Gulf.

Explore the up-and-coming quarter of Al Quoz, in particular the arts district known as Alserkal Avenue (7) on Street 8 (00 971 50 556 9797; alserkalavenue.ae). This avant-garde collection of warehouses hosts art galleries, fashion designers and A4 Space – a funky artists’ hub with a concept store, reading cabins, coffee shop and free wi-fi. Take time to wander round the complex, which is adding 45 more spaces in March.

Lunch on the run

Walk around the corner to Tom & Serg (8) at Al-Joud Center (00 971 56 474 6812; tomandserg.com). Awarded “best new hangout” in the What’s On magazine awards, this bright, urbane café attracts expatriates and has a tempting menu of fresh bagels, old-fashioned milkshakes and chai lattes (8am to 4pm Sunday to Thursday, and 8am to 6pm Friday to Saturday).

The Antique Museum (10) on Street 8 (00 971 4 347 9935; fakihcollections.com) is an Aladdin’s cave of antiques and handicrafts, from Arabian daggers and Yemini Bedouin jewellery to Moorish lamps and pashminas made by a women’s collective (open 9am to 8.30pm, Sunday to Thursday).

Alcohol in Dubai is restricted to licensed hotels and restaurants. The coolest locale for a cocktail is At.mosphere on level 122 of Burj Khalifa (5) (00 971 4 888 3444; atmosphereburjkhalifa.com). It takes a mere 56 ear-popping seconds to ascend 442 metres to the mahogany-clad restaurant and lounge that has vertigo-inducing 360-degree city views. Drinks are pricey – between AED80 and 235 (£15-44) – but they use the very best spirits plus unusual ingredients such as aloe vera, black truffles and frankincense.

It’s best to book in advance: long queues are common. You’ll have to observe the minimum-spend rule of AED400 (£75) per person for a window seat, and AED300 (£57) for a non-window seat, but you won’t need to pay the admission fee for the tower.

Dining with the locals

Dubai has more than 5,000 restaurants, but I highly recommend a walking foodie tour with Frying Pan Adventures (fryingpanadventures.com), which is run by two enthusiastic sisters.

I took the four-hour Little India trail through Bur Dubai, with stops at street stalls plying freshly barbecued chicken tikka, spicy potato bhondas, tandoori rotis and sugarcane juice. The walk is spiced with snippets of history, and is a great way to get to know the real Dubai. From AED380 (£72pp), 6pm start. 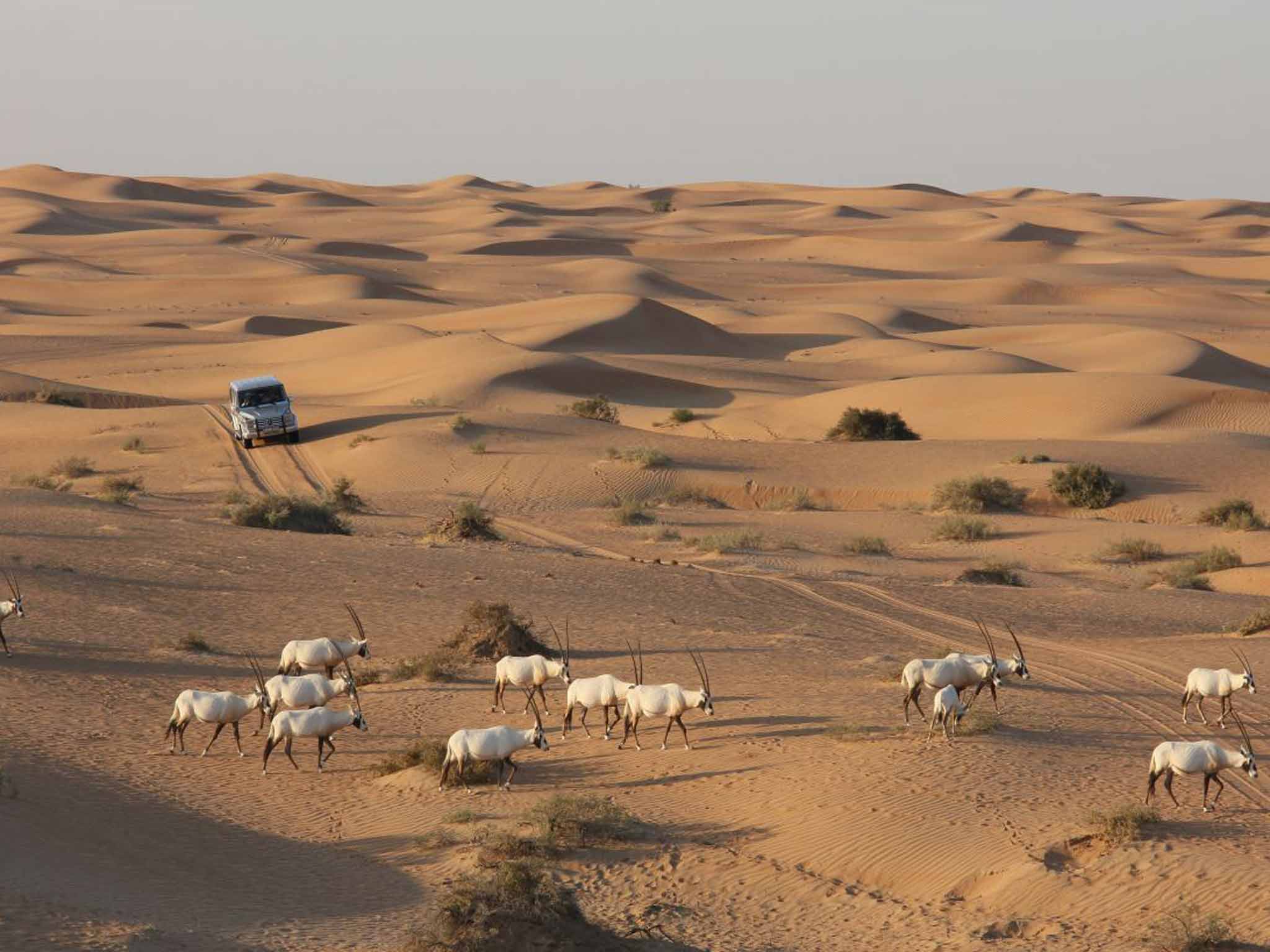 Dash to the desert

Escape the bustle and explore the sands from which the city rose. Platinum Heritage (00 971 4 388 4044; platinum-heritage.com) organises an early morning wildlife drive in a 1950s Land Rover – where you’re likely to spot oryx and gazelles – a camel ride over the dunes and a Bedouin breakfast from AED495 (£93) per adult and AED395 (£75) per child.

Friday is brunch day in Dubai. These four-hour champagne-soaked marathons are not to be missed, especially at the Australian-style Yalumba (11) at Le Meridien (00 971 4 217 0000; yalumba-dubai.com) which combines a buffet with à la carte options and Bollinger (12.30 to 3.30pm; AED399/ £76pp including unlimited champagne.

Alternatively pre-register online and rent a bike (bykystations.com) from one of the stations around town; three hours is AED30 (£5.70). The Jumeirah Corniche – a new running/cycling track – goes along the coast from the Burj Al Arab (15) to Dubai Marine Beach Resort, near Jumeirah Mosque (16).

Icing on the cake

Snake flies from Australia to Scotland in woman’s shoe

Indulge, It's a Sunday ·