NASSAU — Once synonymous with delays, disruptions, major financial setbacks and international intrigue, Baha Mar is now ready for prime time and looking to shed its troubled past.

The results are worth the wait.

As of this past June, albeit nearly three years behind schedule, all three properties at the megaresort — flagship property Grand Hyatt, lifestyle brand SLS and high-end Rosewood — are up and running.

According to Grand Hyatt Baha Mar resort manager John D’Angelo, the beachfront complex is quickly making up for lost time. D’Angelo joined the Baha Mar team in early 2017, just ahead of the Grand Hyatt’s partial opening that spring.

“It was tough at the beginning,” he said. “But we saw a transformation around Christmas, when the Grand Hyatt alone had around 1,200 rooms on the books over that peak week of Dec. 22 to Jan. 2. After Christmas and spring break, we surpassed that, and since then, there’s been no doubt in anybody’s mind that we can handle things, not just from a hospitality perspective but also from a group and conventions perspective.”

I was able to experience the Grand Hyatt Baha Mar from both perspectives when I stayed at the property as a conference attendee earlier this fall.

In addition to 20 restaurants, 11 bars and lounges, the largest casino in the Caribbean and an 18-hole golf course, the Grand Hyatt offers 1,800 guestrooms in two towers, each of which has its own distinct design elements. (The towers’ differences resulted from the building’s initial design, which was to feature two independently branded hotel properties.) 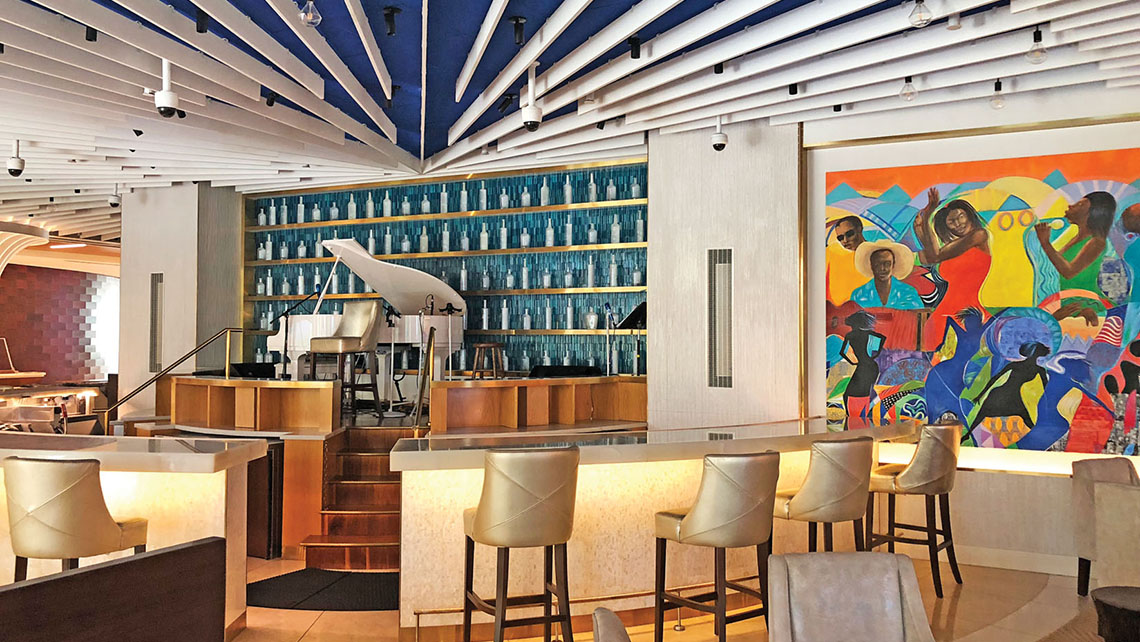 Given the Grand Hyatt’s magnitude, I had anticipated a dramatic lobby with soaring ceilings and perhaps a grand marble staircase or two. Instead, I found two separate lobbies, East and West, both of which were of a moderate size and much more understated than I’d expected.

The West lobby is anchored by a small bar area, colorful art pieces and an elevated grand piano, all of which come together to transform the space into a chic jazz lounge come nightfall. The casino, meanwhile, is almost an afterthought, pushed farther back from the West entryway.

On the gaming-centric East side, however, the lobby decor is darker and more opulent, and the casino sits front and center.

Over at the 299-room SLS Baha Mar, the vibe is similarly sophisticated, though with a trendier, more playful twist. Of note is SLS’s large, eclectic lobby and perfectly appointed Monkey Bar, a prime spot to see and be seen.

SLS’s rooms, meanwhile, are heavy on white: white walls, white bedding, white curtains and mostly all-white furniture, a design choice that probably presents quite the challenge for housekeeping. The overall effect is unabashedly modern, however, and likely to appeal to the property’s target demographic of hip, young jet-setters.

Things are more refined at Baha Mar’s Rosewood, which offers 237 guestrooms and is the most high-end property in the sprawling resort. Though the Rosewood’s common areas are far and away the smallest of the three, what it lacks in size it makes up for in style.

The Rosewood lobby and hallway walls are adorned with what at first glance appears to be wallpaper but is actually a grouping of intricate, hand-painted landscape murals, and the hotel’s Library venue, which serves Champagne, wine and afternoon tea, is arguably the most elegantly decorated space within the entire complex.

The Rosewood also offers one of Baha Mar’s most charming outdoor dining areas: the recently opened Costa restaurant. Serving up coastal-inspired Mexican cuisine, the venue offers cozy seating areas across a cluster of open-air huts, which appear to float above a large, well-stocked koi pond.

Despite their differences, all three Baha Mar properties benefit from quite a few crossover amenities.

The Grand Hyatt and the SLS, for example, share a fitness center and the resort’s Espa spa, while the Rosewood has its own spa and fitness facilities. Additionally, SLS and Rosewood guests can opt to visit any of the Grand Hyatt’s seven pools. 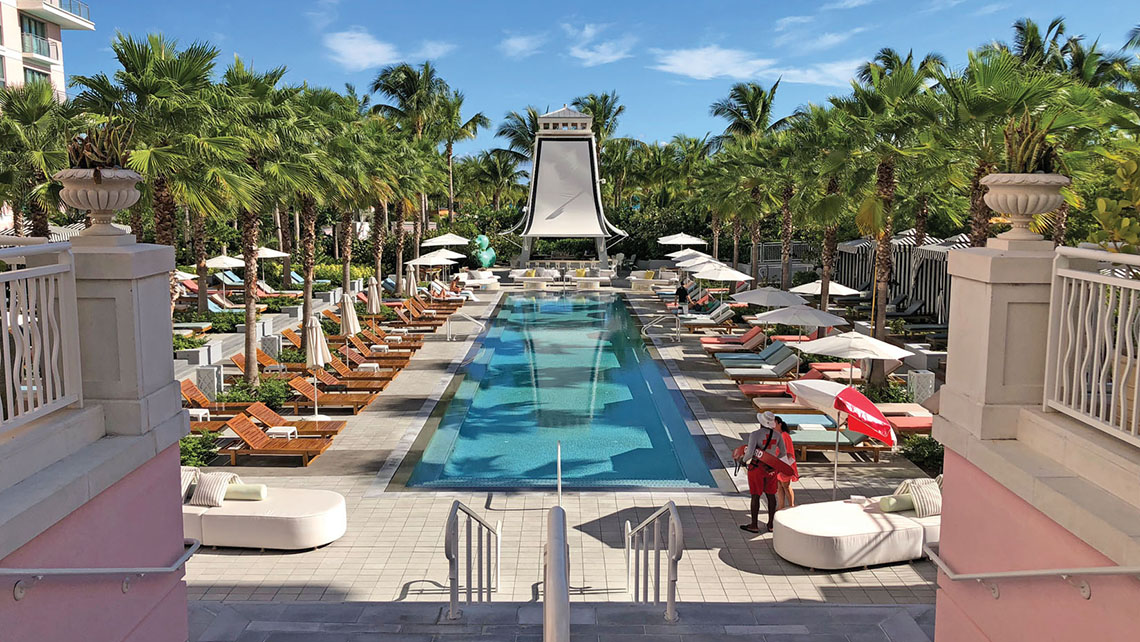 Guests at all three properties are welcome to dine and drink across the entire complex as well as to visit Baha Mar’s Sanctuary wildlife habitats.

Each property also boasts a stunning array of locally focused artwork. The collection was curated by Bahamian artist John Cox, who serves as Baha Mar’s creative arts director and also oversees the resort’s Current Gallery and Art Center. In addition to exhibitions, workshops and lectures, the center organizes artist residencies and forges partnerships with local collectors.

“We’re trying to bring art and culture into the DNA of Baha Mar and bring in enough art to make people curious enough to ask questions,” Cox said. “One of our current partners of note is Dawn Davies, who has one of the largest private collections in the region, with almost 3,000 works. We have a contract with her which allows us to borrow her artwork.”

Cox added that a second phase of art curation, in partnership with the National Art Gallery of the Bahamas and the University of the Bahamas, is in the pipeline.

As close to finished as Baha Mar might seem, however, the project remains very much in development mode. SLS is working to open Carna, a steakhouse, while concurrently preparing to debut this winter what it said will be the first rooftop lounge in the Bahamas. At the time of my stay, staff at the Rosewood also mentioned that a few of the rooms were still getting finishing touches.

Most significantly, in a bid to boost the resort’s family-friendly programming, Baha Mar is constructing a $200 million waterpark, which will feature a wave pool, a surf rider and various slides, among other attractions. It is expected to open by 2021.

“The waterpark will be shared across the three brands, with a local component likely to be included, as well,” D’Angelo said. “It’s so important to us to bring the community into this project. As complete as the hotel component of the brand is, there are a lot of things happening right now and more to come in the future. We’re not really finished — not by a long shot.”

Tourists can now visit more Chinese cities without a visa

Can I travel to the US? Biden administration refuses to lift restrictions on Brits

‘Fantastic!’ Eight best things to do around the UK in September