With dishes like raw beef with caviar, razor clams with almonds, and wagyu nigiri, a tiny village restaurant in County Durham is attracting foodies from across the British Isles.

The Raby Hunt restaurant has receivedglowing reviews since being bought by the Close family in 2009. It is north-east England’s first and only two Michelin-star restaurant.

For many, this would be a cause for celebration, but for some villagers in the rural hamlet of Summerhouse, its inclusion on haute cuisine’s food map has bought nothing but misery. And now a turf war has ensued.

Numerous villagers have claimed the plan of the chef-patron, James Close, to combine the inn with the adjoining cottage to provide extra guest bedrooms, a temperature-controlled wine storage room and improved facilities, will aggravate the problems the popular venue is already causing.

They say they are “prisoners” in their own homes because of “arrogant diners” at the restaurant – where prices start at £130-a-head – causing parking issues.

Many of the 140 villagers say they are fed up, claiming that a constant stream of wealthy diners and delivery vans is blocking the bus stop and side roads.

Tensions escalated when the exclusive restaurant announced a plan to expand into an adjoining cottage to provide extra guest bedrooms. Visitors to the restaurant can also book a room for £180 a night.

In one of several objection letters to Darlington council, two residents, Justin and Tiffany Fear, said the lack of car parking spaces had left them “prisoners” in their own homes.

Fear, 40, said residents, including elderly people, were having to park miles away from their homes to make room for diners. 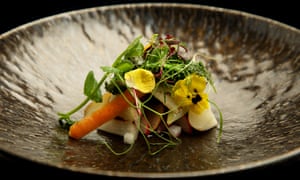 Meanwhile, Barbara Braithwaite, chair of the Summerhouse village hall committee, said the owners and staff treated the village “with contempt”.

She said: “Unfortunately, the business does not bring anything positive to the village. The owners and staff show no interest in the village and have no interaction with residents.

“The notoriety and success of the restaurant means that there are a great many staff, trainees and interns as well as customers all needing to park their cars, which obviously puts a strain on our small village.”

Braithwaite said residents had attempted to resolve the parking issue by offering the restaurant use of the village hall car park for £50 a week, but an agreement was not reached.

On the restaurant’s website, Close describes himself as a “highly competitive … food visionary” whose “success has come on the back of hard work, raw talent and a stubbornness to succeed and be the very best”.

A spokesman for the Raby Hunt said the expansion scheme was important to help sustain the business, which would in turn ensure the longevity of the 19th century-listed building, but it would not increase the number of covers in the restaurant.

He said: “The experience of visiting the restaurant has to continue to improve, resulting in increased numbers of visitors coming to the restaurant and area to sample the fine dining experience.”

A letter from the restaurant to the council, rebutting residents’ claims, states: “The applicant and business owners are very aware and sympathetic to their surroundings and neighbours. They operate within the constraints of their licence. However, as expected with a business of this quality, the operational times are far greater than the customer opening times, and do include a number of hours of preparation time before service and clean-down time after service.”

Planning officers have recommended the proposal for approval by councillors later this week, stating it would cause a negligible increase in customers visiting the premises, and that the impact on residents and road issues was not sufficient to warrant a refusal.

10 of the best museums in Berlin

Zaha Hadid-designed ME Dubai hotel to open in February

Ask the Captain: What do airline dispatchers do? Why are first officers on international flights older?