WASHINGTON — Hotel brands often position themselves as unique, trying to stand out from the crowd with creative uses of space and amenities. The Eaton Hotel, which launched here last month as a “mission-driven” brand, achieves that and more.

The 209-room Eaton officially opened in late September, the first of five Eatons in the pipeline, to be followed by Hong Kong in January. The others are to open in San Francisco, Seattle and Toronto.

The younger Lo, an activist herself, told me she set out to create a hotel that would be a community hub for people who want “to make the world a better place.” The hotel’s values include diversity, equality, environmental sustainability, immigrant rights and “basic human decency.”

Lo doesn’t say the hotel is liberal-leaning. Instead she asserts, “We are driven by positive, proactive values.”

Each Eaton will have a different look, customized for that location. In D.C., the look is meant to give guests a “cozy, at-home feeling,” Lo said, and it is “more bohemian.”

Very obvious attention was paid to the artwork, and the hotel has plenty of plants to complement the use of natural materials throughout. The effect is cozy, with soft leather and wood furniture and unique area rugs throughout the lobby, cafe and Radical Library, its walls lined with bookshelves.

But don’t let the well-appointed amenities and the young, hip crowd in the Kintsugi coffee shop and Wild Days rooftop bar make you think this is just another trendy hotel. The property’s mission-driven nature, far from an afterthought, is part of the entire experience. 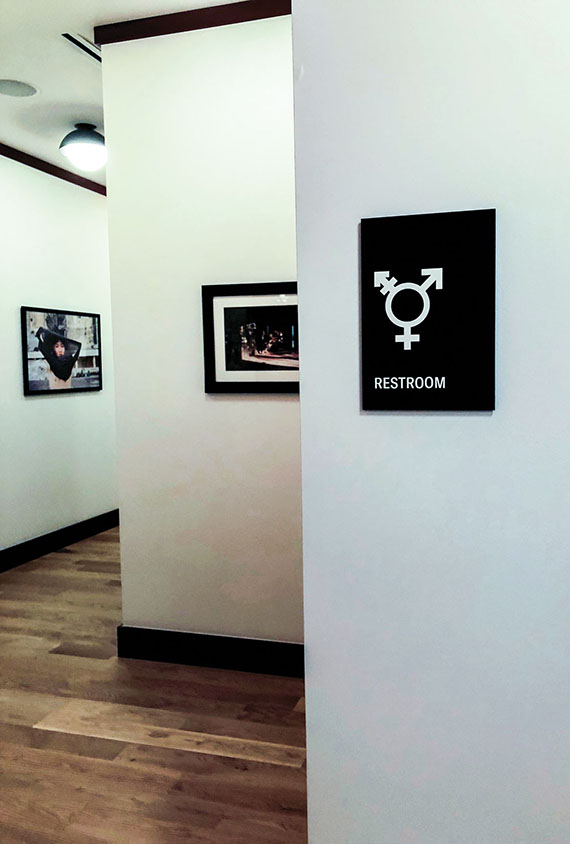 Upon exiting the elevators on every floor you’ll find a thought-provoking photo: Rosa Parks getting arrested on floor nine; a sign that says “Waiting Room for Whites Only” on the sixth floor. All hotel bathrooms are gender neutral.

The rooms at Eaton, which complement the look of the lobby, have a selection of “radical and rare books.” In my room the titles included “Queer (In)Justice: The Criminalization of LGBT People in the United States” and Viet Thanh Nguyen’s “The Sympathizer.”

The minibar items, described as “rigorously sourced, sustainably healthy,” included trail mix from Together We Bake, which trains women “in need of a second chance.” My minifridge had kombucha and yerba mate shots and a selection of local beer and a boxed wine. Coca-Cola is available upon request, Lo said.

A photo of Muhammad Ali and his mother adorned the wall behind my bed, and a soothing Himalayan salt lamp provided a soft glow. Every room has a record player and a selection of LPs.

The bathroom products are from Grown Alchemist, an Australian company that uses only organic ingredients. I fell in love with the Damask Rose, Black Pepper & Sage shampoo.

The first thing a guests sees upon entering the hotel is the Eaton Radio studio, also visible from the street. The station’s original content focuses on issues such as immigration, women’s rights, race and climate change. A show focused on indigenous rights is called the Red Power Hour.

Not surprisingly, the Eaton spa will offer traditional treatments like massages, but also reiki, acupuncture, sound bathing and meditation. 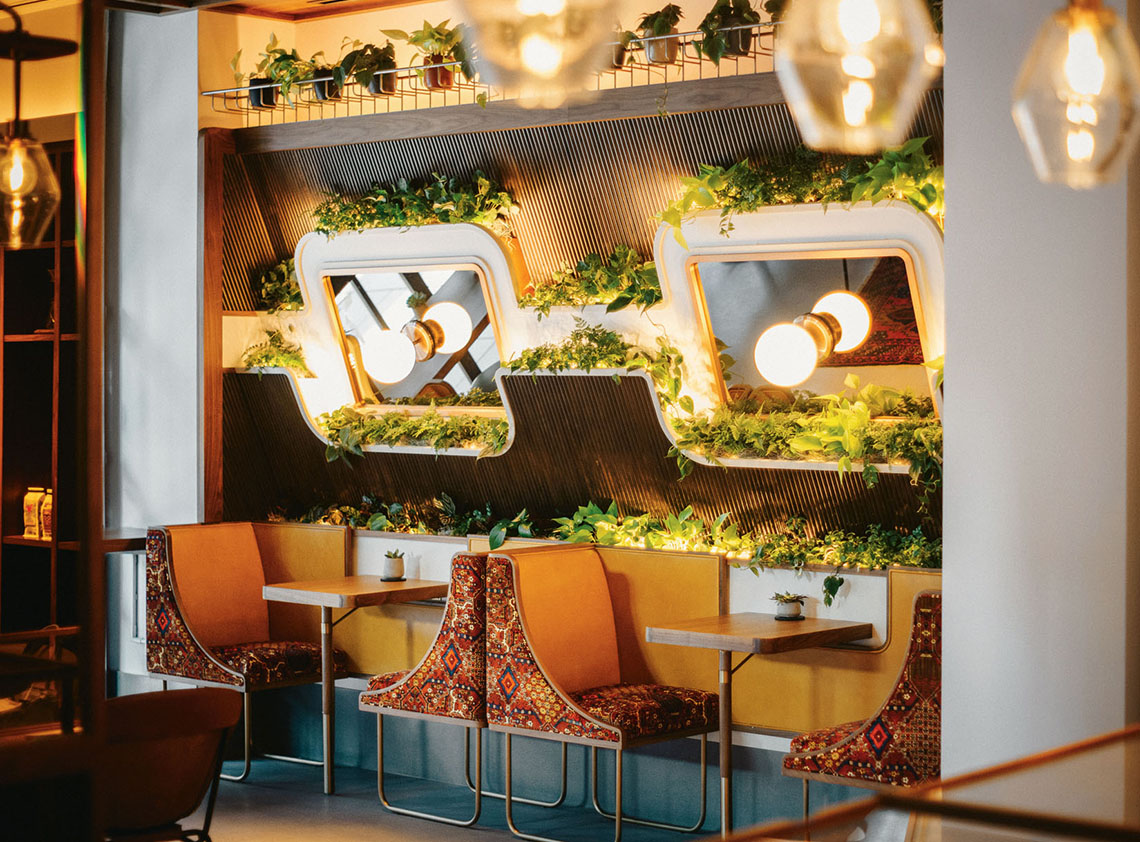 Eaton’s food and beverage incorporates the mission as well. All its by-the-glass wines are from immigrant-founded companies, such as Napa’s Poseidon Vineyard, whose founder escaped Hungary in the 1956 revolution “with only the shirt on his back,” according to its website.

All coffee served on-site is from Virginia-based Red Rooster Coffee, whose tag line is Coffee With a Conscience and which offers beans that are fair trade, direct trade and transparently traded.

At Wild Days, the rooftop bar, music venue and taco joint, the cocktail names include the Revolution Will Not Be Televised and Burn Baby Burn.

A menu standout is the vegan chicharrons, which everyone calls nachos and which at least three people recommended before I ordered it. Made with an Impossible Burger chili and vegan queso (neither of which tastes vegan at all), it lives up to the hype and then some. The tacos here are also fun and tasty. My favorites were the short-rib and mushroom with bitter greens.

Wild Days’ outdoor patio has fire pits and lots of greenery, and it will soon have a garden that will supply the hotel’s eateries.

Not yet open last month was the main restaurant, American Son, which officially debuted Oct. 15. Named for Chef Tim Ma’s experience as the second-generation of a Chinese family in Arkansas, the menu serves “American food through immigrant eyes,” Lo told me, and is “vegetable-forward.”

The Eaton is often described as the “anti-Trump hotel,” and being about six blocks from both the White House and the Trump International Hotel, it certainly offers a stark alternative to the crowd that might gather there.

Nonprofit and mission-based groups are already booking the property and its varied meetings spaces, among them environmental lawyer groups.

Any traveler would enjoy the comforts of the Eaton, but it certainly holds an extra appeal to those who consider themselves politically active and progressive.