Home » Where to stay » A backpacker’s guide to Chile: a one-month itinerary

Squeezed between the Andes and the Pacific and stretching from the Atacama Desert to the glaciers of Patagonia, this strip of a country opens its secrets to backpackers prepared to push into the lesser-known quarters: to the lava fields of Conguillío national park with its monkey puzzle trees, or to the wild beaches of Hueicolla. Along the journey you can sip bitter-sweet pisco sours, squirm at salty raw piure (bizarre red-fleshed sea creatures) and fill your boots with world-class Chilean wine.

Start in Santiago, in the historic Bellavista neighbourhood where every corner is adorned with street art, shops sell arty crafts and reggaeton blares from bars and clubs. A must-try is caldillo de congrio (eel soup), which is served with homemade bread and lashings of spicy pebre salsa – sample it at one of the restaurants in the Mercado Central. Aji Hostel offers digs near the Bellavista district with breakfast and dinner included (dorm bed from £9). 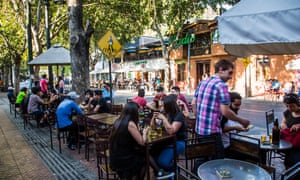 The ski resorts of El Colorado, La Parva and Valle Nevado (snowy in July) can be reached in less than 11/2 hours by bus. Look out for cheaper passes and promotions on week days at chileanski.com. Trekking opportunities begin from Santiago’s eastern limits, where the city nestles up against the Andean foothills. Independent excursions such as the hike to 2,750m Cerro Provincia are possible by fit and competent hikers with an early start, but reaching the lower summit of Alto Naranjo at 1,850m on the same ridgeline will be adventure enough for most. Both are accessed from Puente Ñilhue at 1,000m. Find route details, access and maps for this hike at Andes Handbook.

From the capital, travel north on a reclining bed-bus to the desert oasis of San Pedro de Atacama (22½ hours, turbus.cl). Nearby Valle de la Luna is accessible by bike but you’ll need to join a tour (arranged in town) to journey to the smoking and burping land of the El Tatio geysers or the flamingo-crested lakes of the salt flats. The night sky here is spectacular and French astronomer Alain Maury offers star-gazing tours (£28, spaceobs.com). Hostal Rural is a sociable base for Atacama explorations (dorm beds from £15). 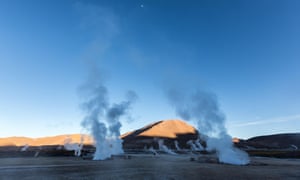 Break up the bus trip back south with a stop in the mountainous, fertile Valle del Elqui. Base yourself in the village of Pisco Elqui, where it’s possible to get involved in activities such as trekking and biking – and also savour pisco sour cocktails – made from grapes in the surrounding vineyards – mixed with fresh pica lemons. To find out more about how pisco is made take a tour of the Mistral distillery (destileriapiscomistral.cl/en/home). El Durmiente Elquino restaurant across the road from the distillery is a good spot for dinner.

Valparaíso is a one-hour bus ride from Santiago’s westerly Pajaritos bus station. This vibrantly painted, bohemian port city is best navigated on the funicular elevators, alongside locals with their shopping bags. While tourists flood the honey-pot hills of Cerro Alegre and Concepción, there are actually 42 neighbourhood hills to explore. Be sure to dive into La Sebastiana, the home of Nobel prize-winning poet Pablo Neruda, and designed to look like a boat. On Cerro Panteón, tour the resting place of Europeans who helped build “Valpo” in the Cemetery of Dissidents, and take the funicular from the foot of Cerro Artillería for a view over the street-art daubed, Unesco-listed port district. Hostal Casa Verde Limón (beds from £8) embodies the city’s creative spirit with its spiral staircase and trapeze swing. 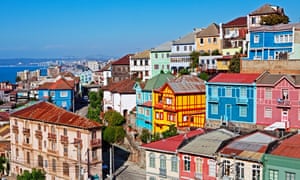 Returning to Santiago, take the metroto Bellavista de la Florida station then the number 72 bus into the Cajón del Maipo. The bus winds between towering and narrow walls of rock to the settlement of El Volcán. From there it’s seven miles to the mountain town of Baños Morales where trekking, rock climbing and mountaineering adventures usually start.

Take a break in the Central Valley wine region, accessible by daily trains from Santiago to San Fernando, or the once monthly wine train, which includes live music and tasting in vineyards (trencentral.cl). A good base for this sojourn is the pint-size town of Santa Cruz, and explore the excellent Colchagua museum, home to weird and wonderful artefacts, including the shuttle used to rescue the trapped Chilean miners at San José in 2010.

Continue via a two-hour local bus to kick back or hang 10 at one of the surfing world’s renowned left-hand point breaks. The town of Pichilemu has a surf school, nightlife, and restaurants – but those in the know head a couple of kilometres south to Punta de Lobos, with its quieter beach and international vibe. The beachside Cabañas Cantomar apartments are well-equipped (£50 a night, based on two sharing, off-season). 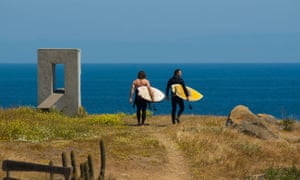 Retrace your steps back to San Fernando and pick up a connecting bus down to Temuco, via the Ruta 5 motorway (AKA the Pan-American Highway connecting northern Patagonia with Alaska), the starting point for adventures in the Araucanía region. Rich in indigenous Mapuche culture, volcanoes, lakes and monkey puzzle trees, the landscape of the Conguillío national park offers trekking (walkopedia.net) and adventure cycling (bikepacking.com). April and May are an especially beautiful time to travel, when autumn leaves mix with the first flurries of snow.

Continue south to the university city of Valdivia where you can learn about the Araucanía war between the colonial Spanish and the indigenous Mapuche people at nearby Fort Niebla, and stop for a beer at the Kunstmann brewery. Stay at Airesbuenos Hostel and Permaculture eco hostel (dorm bed from £12, airesbuenos.cl).

It’s a relatively short ride from Valdivia to the end of Ruta 5 and the port city of Puerto Montt, gateway to Patagonia. Board the Navimag ferry and find a sleeping berth as they load cows, tree trunks and campervans. The 23-hour sail to Puerto Chacabuco allows time to adjust to the slower pulse of Patagonia. 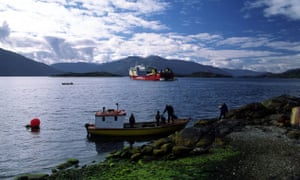 Roll east into the hub city of Coyhaique by a one-hour shared taxi transfer or a bus connection in Puerto Aysén. You are now at the heart of the 770-mile Carretera Austral (southern road) that connects Patagonia’s “Route of (national) Parks.”

The adventure playground of Cerro Castillo national reserve is a one-hour bus drive south from Coyhaique. A 30-mile trek through a bewitchingly beautiful forest, with distant views to the towering crags of Cerro Castillo, rivals the more celebrated, busier and harder-to-access Torres del Paine. Camping is permitted in designated campsites, but no facilities are provided. Provisions and a small restaurant are available in the village of Cerro Castillo at the end of the trek. Ongoing daily bus connections are best booked previously in Coyhaique during the busier summer season. 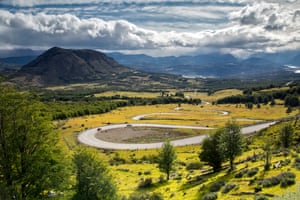 Winding up the journey, take the bus to the northern section of the Carretera Austral to remote Chaitén, which was all-but lost under volcanic ash in 2008. Locals, such as Nicholas from Chaitur Excursions offer tours through Pumalín Park and have incredible stories of resilience to tell about the controversial struggle to rebuild the town. Most treks can be done in a day. Cabañas Caleta Gonzalo, on the edge of the fiords, has cabins (from £78 for two) and camping (£18 for up to four).

Parque Nacional Pumalín Douglas R Tompkins, named after its late American founder, was gifted to the Chilean government in January this year. Most of the park’s trails are short, including the 2.5 hour hike to the Chaitén volcanic crater and several can be attempted in a single day (parquepumalin.cl). Along the way you’ll pass beneath thousand-year-old alerce trees and walk in the shadow of the Chilean rhubarb’s monstrous, car-bonnet-size leaves.

Travel from Chaitén to Puerto Montt via the Naviera Austral ferry (book well in advance). From here it is 12 hours back to Santiago by sleeper bus.

Public transport is excellent across the majority of Chile. For example, the 12-hour, 600-mile journey from Santiago to Puerto Montt in Patagonia is provided by a number of companies from £25 one-way with recorrido.cl – on a coach with reclining seat. Premium class with lie-flat seats costs £70 one-way with turbus.cl (website in Spanish). Passenger ferries in Patagonia provide an affordable experience of the fiords, with meals and accommodation included. The 300-mile ferry trip from Puerto Montt to Puerto Chacabuco takes 23 hours (from £54, navimag.com). Train services are usually reliable and comfortable, albeit limited to a 250-mile route through the Central Valley wine region. For service information see trencentral.cl. 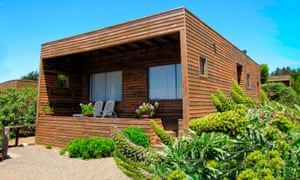 Hostels with dorm beds start from about £8pp a night. Outside cities, affordable cabañas (cabins) can be rented, especially by the coast. To roam free in Chile’s national parks and mountains, consider bringing a lightweight three-season tent.

Cerro San Cristóbal. Often billed as the number one attraction in Santiago, this metropolitan hill’s vantage point over the city can be hiked, biked or reached by cable car. Sadly, smog often spoils the views of the surrounding Andes. It can also get overcrowded. For a more-challenging experience, tackle the 800-metre climb to the summit of Cerro Pochoco on the city limits. 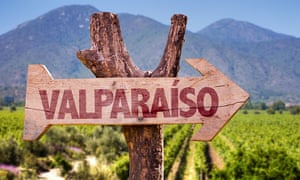 When entering a private home never take your shoes off without asking. Dialect words are rich, wonderful and confounding. Casually throw in “cachai” (you know) at the end of a statement for rhetorical effect and to make locals smile.

Book The House of the Spirits by Chilean author Isabel Allende. Published in 1982, during the Pinochet dictatorship, this irreverent work of magical realism interprets Chilean history over the course of four generations.

If you eat or drink one thing

Terremoto (earthquake) cocktail. Unless it’s a Richter 8+, Chileans will gently chide you for claiming you’ve experienced a real earthquake. The same masochistic pride is poured into their classic terremoto cocktail. The traditional recipe, served in a half-litre cup, requires lashings of pineapple ice-cream topped up with white wine then laced with fernet. If it doesn’t send everything a bit seismic, order a second round, asking for a réplica (after-shock). Terremotos are served across the country on Independence Day (18 September), or enjoy it where it was invented, in Santiago’s La Piojera dive bar.

Food can be expensive in Chile but transport and sightseeing are affordable. Staying in rural areas or exploring the mountains will keep costs low. Expect a daily budget of £50-£80.

Leaving the Atacama Desert behind, continue east to Salta in Argentina. Alternatively, travel north to explore Cochabamba and La Paz in Bolivia, or north-west to Arequipa and onwards to Nazca, Cusco and Lima in Peru.

From Santiago, in central Chile, cross the spectacular 3,200m Cristo de Redentor pass by international bus with views of Aconcagua (in Argentina), the highest mountain outside the Himalayas. In the south of Chile, pass through the white-water rafting and kayak hub of Futaleufú into Argentina. Discover the old Welsh settlement of Trevelin; the funky hub of El Bolsón and ski-resort-cum-party-town Bariloche.

How to spend 48 hours in Malmo, Sweden

‘I found out how the celebrities are sweating the weight away’

WATCH: ‘Wasted’ plane passenger dragged off flight after trying to remove his trousers