If there’s a question I get asked more than any other, it is: “Where should I stay in New York?” The challenge with choosing where to splash out for some shut-eye in the city that never sleeps is that there’s no shortage of places to rest your head – especially since each district of this dynamic city has its own distinct personality, and discerning travellers can now stray from Manhattan’s thoroughfares in almost any direction.

I’ve been staying in New York hotels for decades – I grew up on the Upper East Side, and visit twice a year to see family – and although that may make me biased, I think forward-thinking NY hotels are some of the best in the world. Having said that, characterless chains abound, and with NYC being one of the most expensive cities around for accommodation, it’s easy to end up with a dud.

So how to sift the wheat from the chaff? Pick a neighbourhood and decide whether you want to stump up for something fancy or if you’re happy to go back to basics, as long as it’s stylish. Here are 10 of my favourite places that combine soul and style, that ditch buttoned-up service, and feel steeped in the spirit of this caffeinated city. 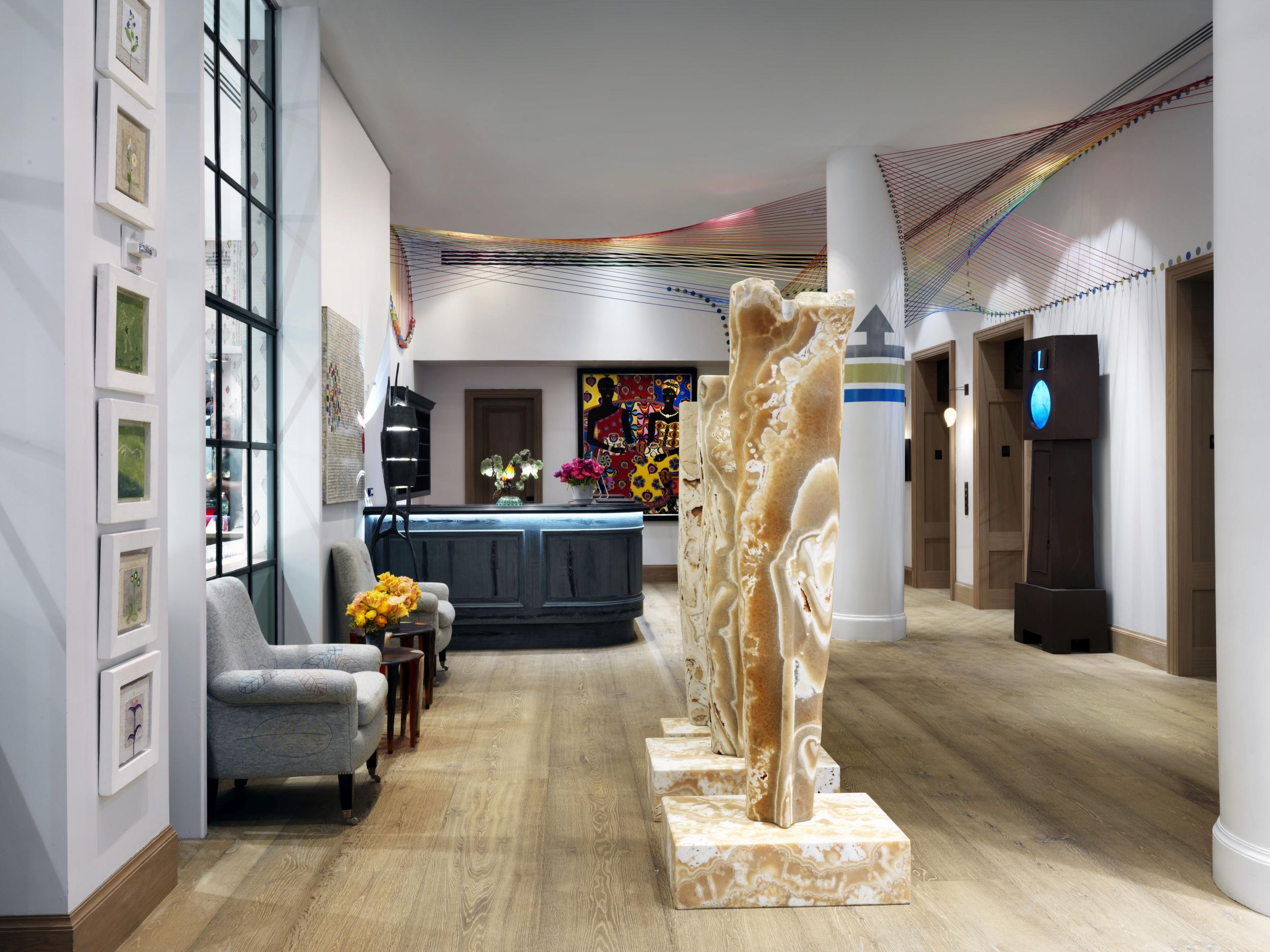 Best for art: The Whitby

Tim and Kit Kemp of Firmdale Hotels were smart to create a Midtown sibling (two blocks north of MoMA) for their popular Crosby Street Hotel. Their London-centric design formula may be familiar – a slick 16-floor, 86-room newbuild filled with characterful design – but as in their other hotels, the interiors are a tonic of colour and textures thanks to Kit’s artful imagination (minimalists steer clear). Specially commissioned witty artworks and larger than-life-sculptures are scattered throughout the building. A wall glows with artist Martha Freud’s votive ceramics, each etched with different New York landmarks. In the bar, the cocktails are first class – try a tangy Whitby Paloma (Ocho Blanco tequila infused with house-made marmalade, fresh pink grapefruit, lime, agave and soda) – while the leafy Orangery terrace is a blissful retreat from the concrete jungle. 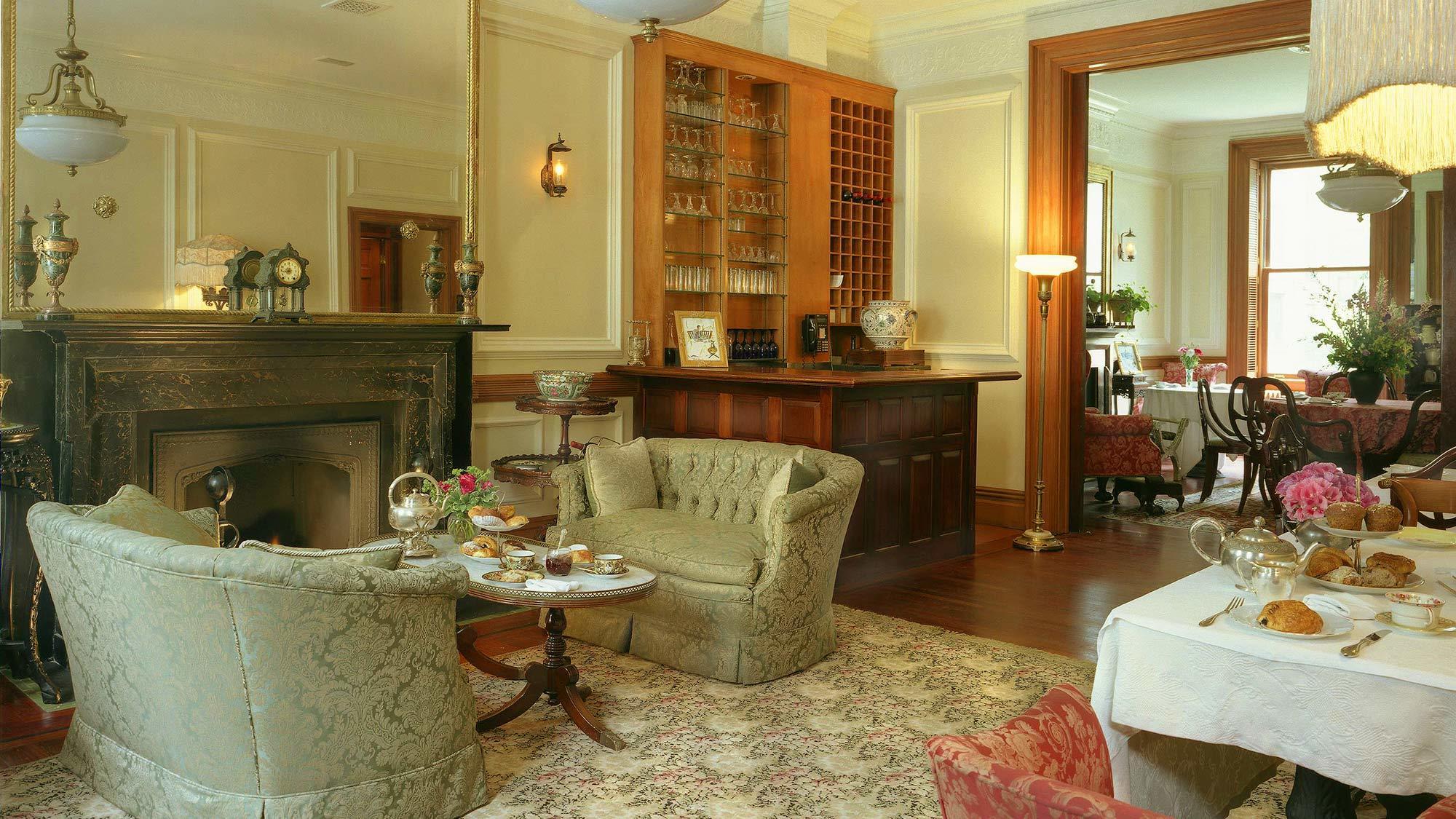 Best for history: The Inn at Irving Place

This intimate turn-of-the-century brownstone townhouse is a rare breed of old-fashioned retreat in Gramercy Park. Classic chintzes, Tiffany lamps, Victorian curios and the odd four-poster bed make this tiny 12-room hotel a world away from the contemporary cool that dominates Manhattan’s accommodation landscape. Be sure to book a pretty table at their tea salon Lady Mendl’s, to enjoy the refined five-course afternoon spread. Note that children aren’t allowed – it’s for 12 years and upwards. 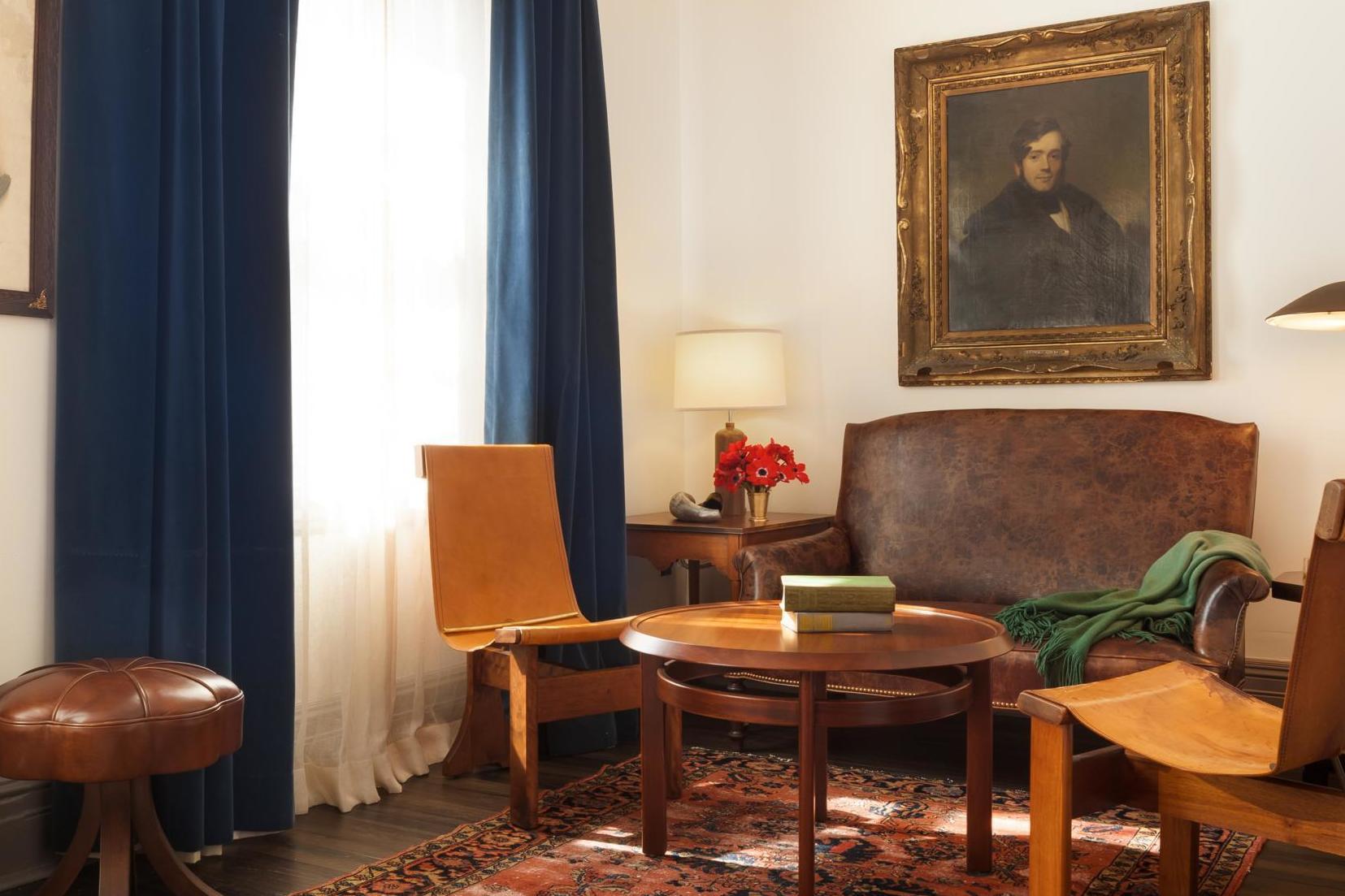 In the heart of Chelsea’s gallery district, this neo-Gothic former seminary with its Intelligentsia coffee truck and bar parked outside is an expert at blending heritage with hip. eBay-sourced Victorian and Edwardian antiques are among the furnishings, perfect for the Instagram generation.

Not to be confused with the much flashier Standard High Line, which is a few blocks south, this is off the tourist trail on Tenth Avenue, a block from the High Line park and close to Chelsea Market’s many foodie delights. Service and facilities come with a light touch; in the absence of a concierge desk, this quirkier spot is suited to seasoned visitors to the city who don’t need their hands holding by the kind of brass badge-flaunting staff in starched suits you get at the big chain hotels. 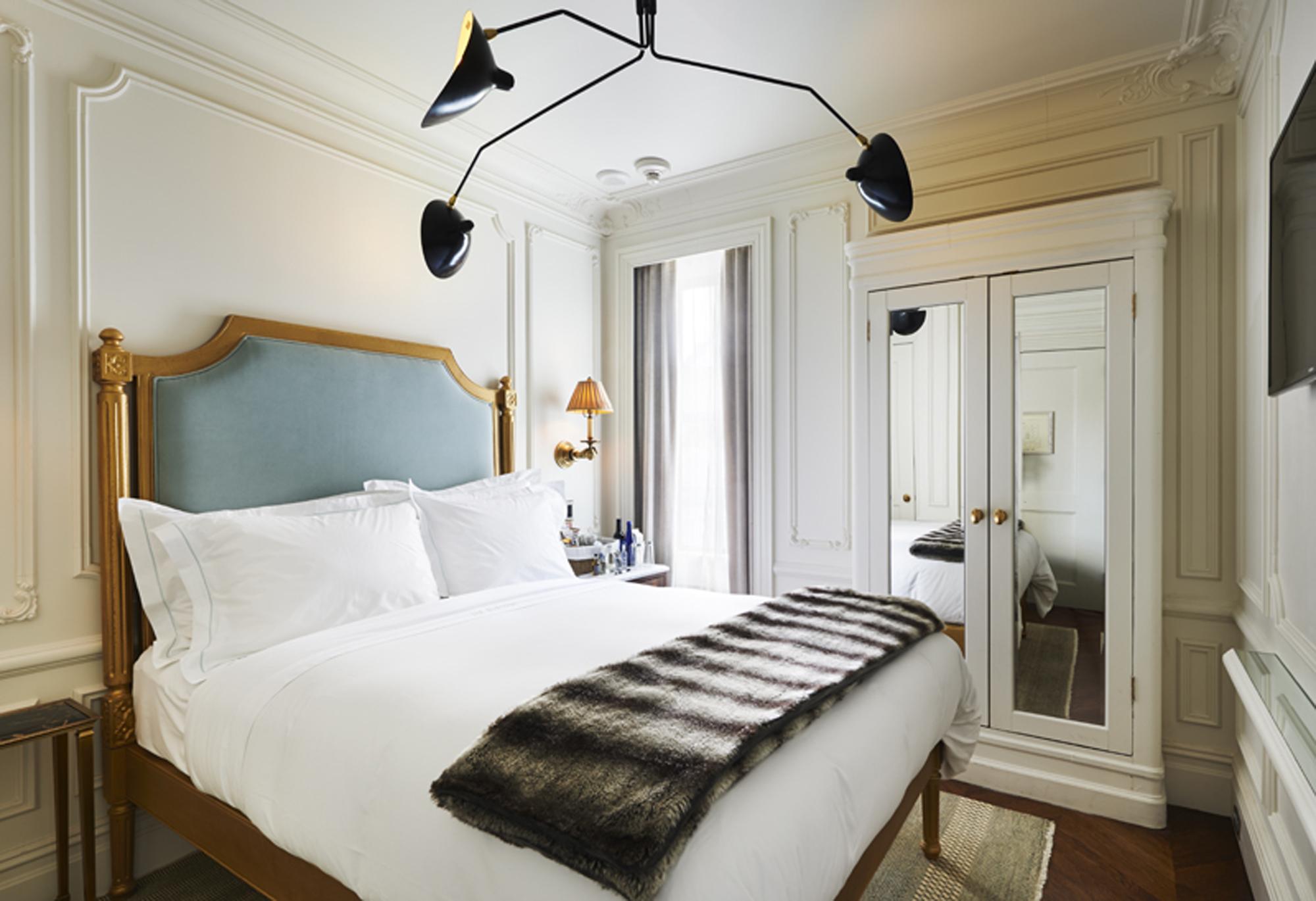 Best for value: The Marlton

Hotelier Sean MacPherson is a master of creating a seemingly historical hotel that fits into the fabric of a once-seedy district – look no further than his most famous project, the Bowery Hotel, for evidence. For The Marlton’s 2013 opening, he gave this nine-storey, 1900-built building a new lease of life – a world away from its original incarnation as a student dorm.

A block north of Washington Park, the 107 rooms are small but well designed, exemplifying MacPherson’s shtick of crisp quality bed linens, Persian rugs and seemingly vintage yet utterly modern bathrooms. The sociable lobby lounge and bistro at the back make it a favourite with the music and fashion pack, and service is friendly but unashamedly low key. 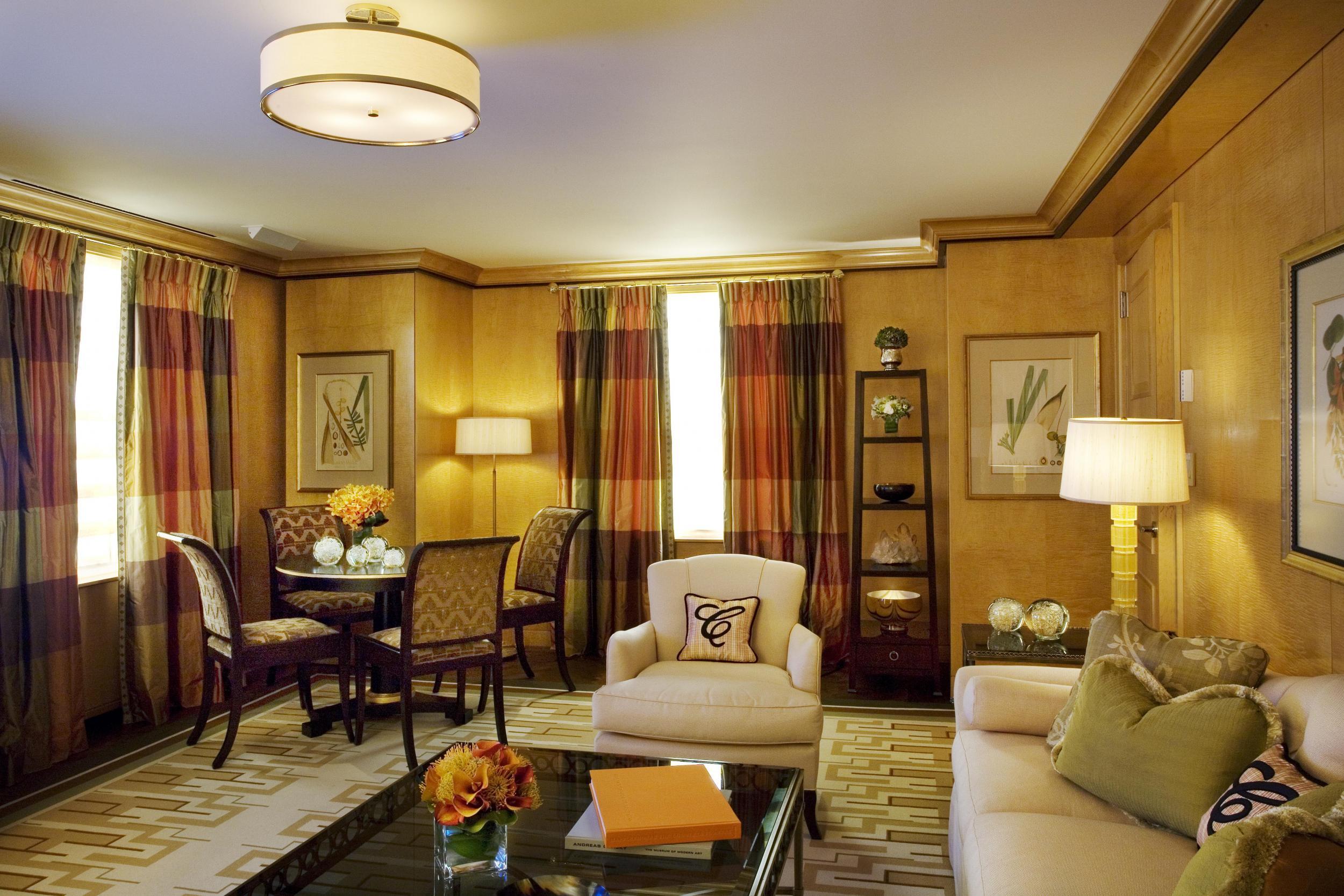 Best for families: The Carlyle

Having the top-hatted bellhops at this Beaux Arts brick building (now owned by Rosewood Hotels) open the door to you in the same way they do for high-profile dignitaries is enough to give you a thrill. Find your way to one of its 188 rooms and suites, and you don’t know which VIP or celebrity you might pass; last time I was there, Daphne Guinness was getting a blow-dry in the salon.

The eye-popping cityscape views from the upper floors evoke sweeping opening scenes from the movies. George Gershwin spent time here in the 1930s, and today Woody Allen is known as a weekly regular, having played the clarinet with Café Carlyle’s resident jazz band. Although it recently underwent a refurb, Bemelmans Bar is as atmospheric as ever, with murals hand-painted by – and named after – Ludwig Bemelmans, author of the Madeline children’s books, who painted the bar in return for living here in the 1950s. Because of the link, the hotel is a good bet for well-heeled families, with Madeline-themed packages and good provisions for children. 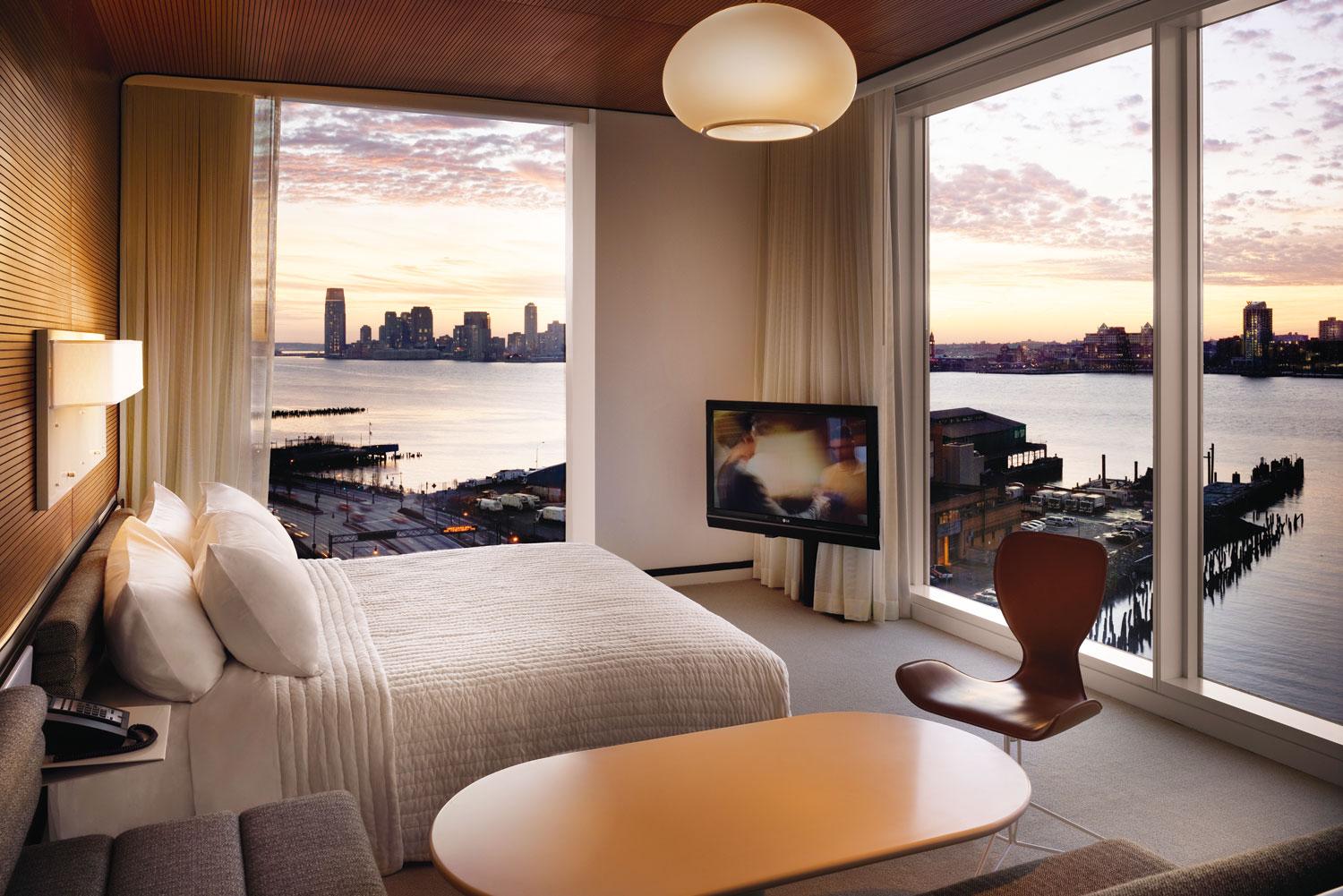 Hip hotelier André Balazs may have sold his pop culture-loving hotel brand, but its most iconic 18-floor high-riser still straddles the High Line in the heart of the Meatpacking District, an arm’s length from Chelsea’s galleries and the Whitney Museum of American Art. Voyeurs and exhibitionists alike appreciate the wall-to-wall windows in the 338 rooms, which ensure you can see and be seen (remember that, as you reach for your bathrobe).

The Standard Grill steakhouse is another place to see and be seen, as is the street-level German pub, Biergarten, complete with ping pong tables. The rooftop Le Bain bar is as exclusive today as it was when it opened – non-residents have to queue, and though hotel guests aren’t guaranteed admission, they get priority. 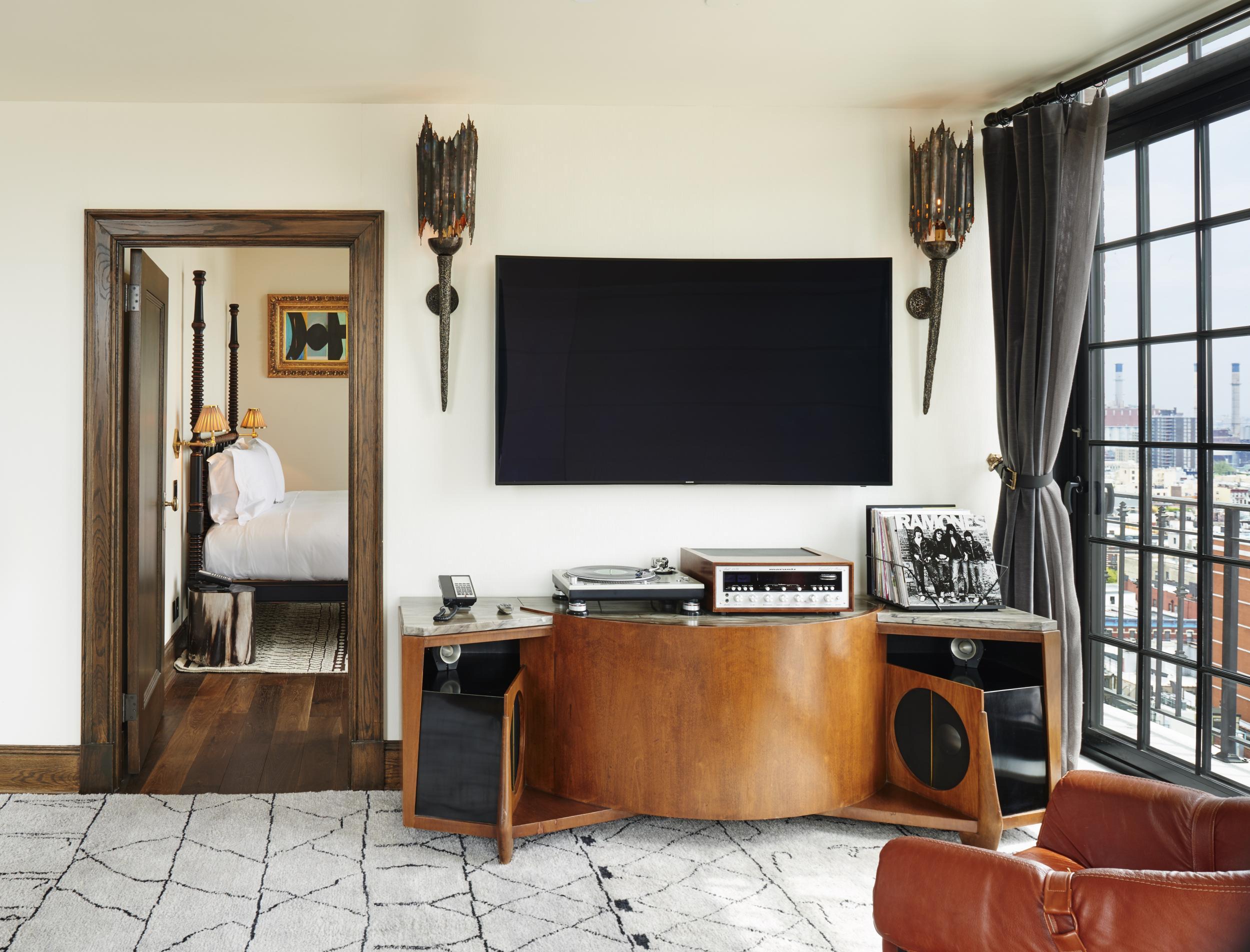 Best for hipsters: The Ludlow

Part of the gentrification of the once gritty Lower East Side, the Ludlow opened in 2014 opposite Katz’s Delicatessen. The days of artists living in cheap lofts are long gone, but the hotel lobby evokes a louche 1980s vibe of dive bars and underground recording studios, with a sociable work-rest-and-play space with low-slung leather sofas and giant Marshall speakers.

Bedrooms are bright and breezy, and most have incredible views over the city. A perk of staying in this place is that you can also leapfrog the techpreneurs and art-world hotshots who hang out here to get into the popular ground-floor restaurant, Dirty French, which is always booked up. 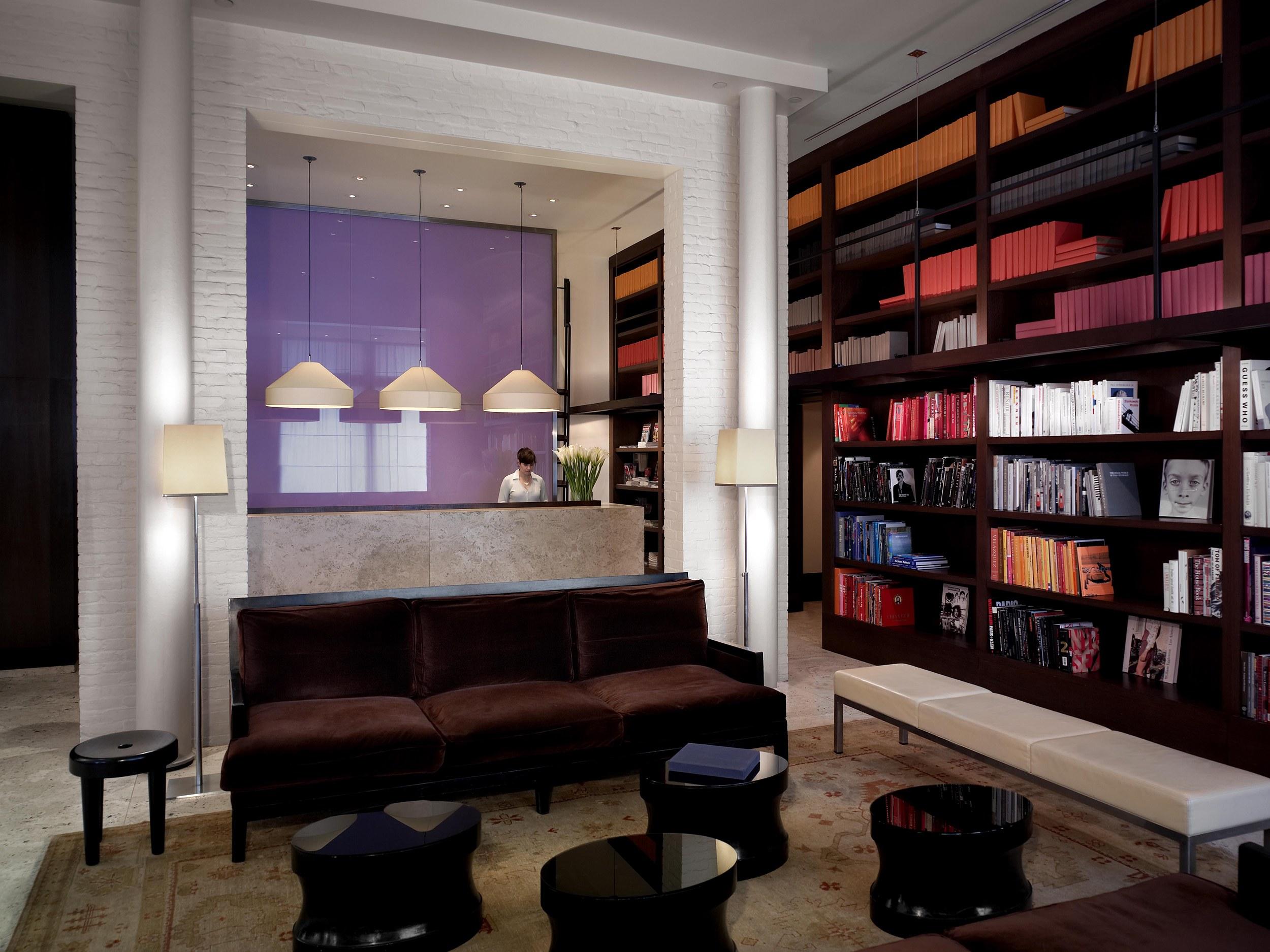 Best for shopping: The Mercer

If the hotel industry had its own almanack, the birth of this 75-room hotel (Andre Balazs’s creation) in 1998 would be catalogued as having set the blueprint for the boutique trend. Twenty years on, the exposed brick and wooden floorboards in the bedrooms are as on point as ever. Here, near Apple’s HQ, in a 1890 Romanesque Revival mansion, Soho’s media and music wranglers and fashion luvvies still head to chef Jean-Georges Vongerichten’s Mercer Kitchen restaurant down below to schmooze, booze and make their moves. 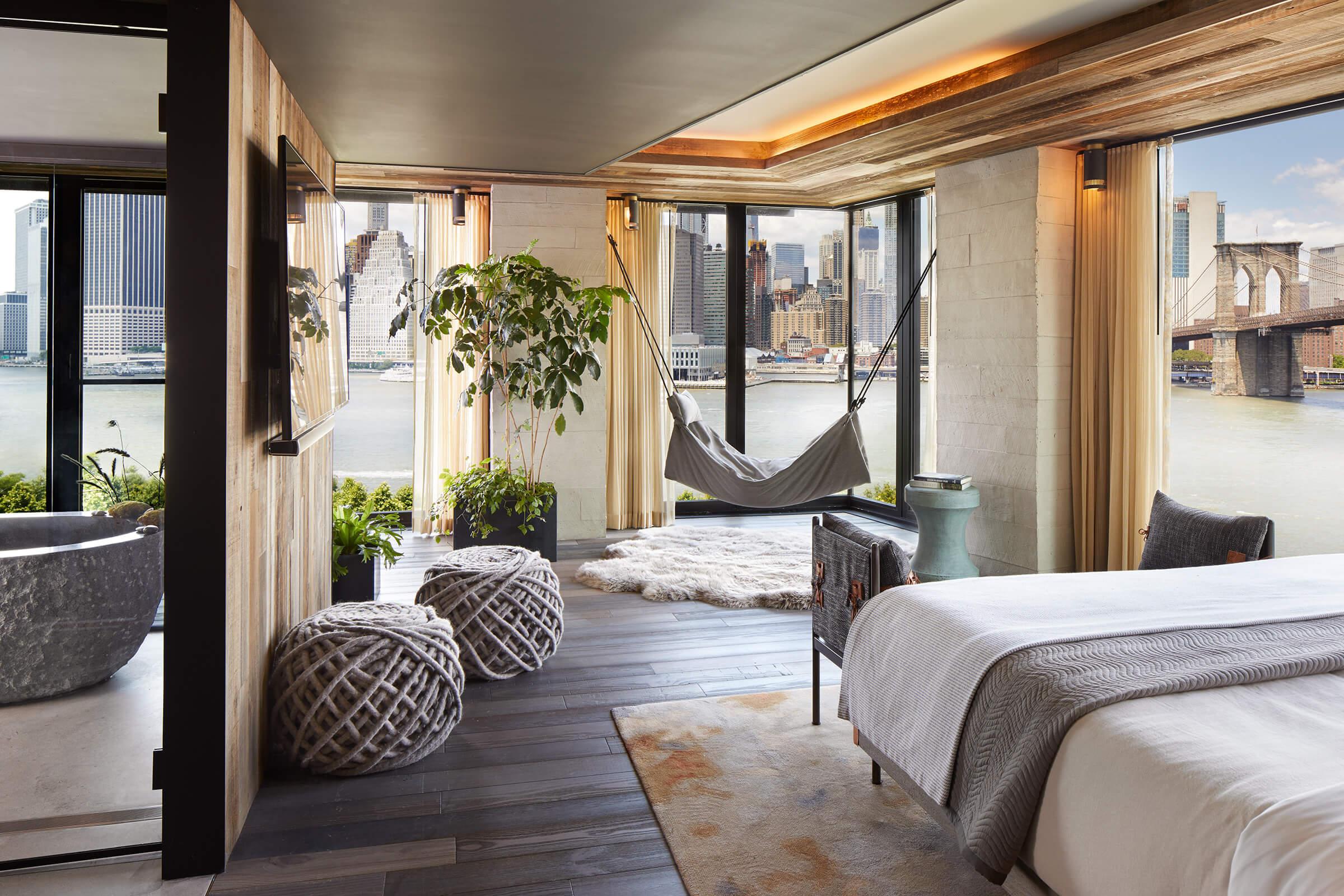 Barry Sternlicht declares this the best hotel he’s ever created – and as the founder of W Hotels, he knows what he’s talking about. A 25ft living wall of figs and ferns in the lobby, decor made from reclaimed materials, wind-powered electricity and a dedicated triple-filtered drinking water tap in every room confirm that this a seriously eco-friendly hotel – there’s even a Tesla available for local transfers. The bedrooms are a warm and welcoming tableau of upcycled wood and natural, organic fabrics. Be sure to book one which enjoys epic views over the Brooklyn Bridge and East River, but for the full scene in high definition head to the tenth-floor rooftop where there’s also a pool. 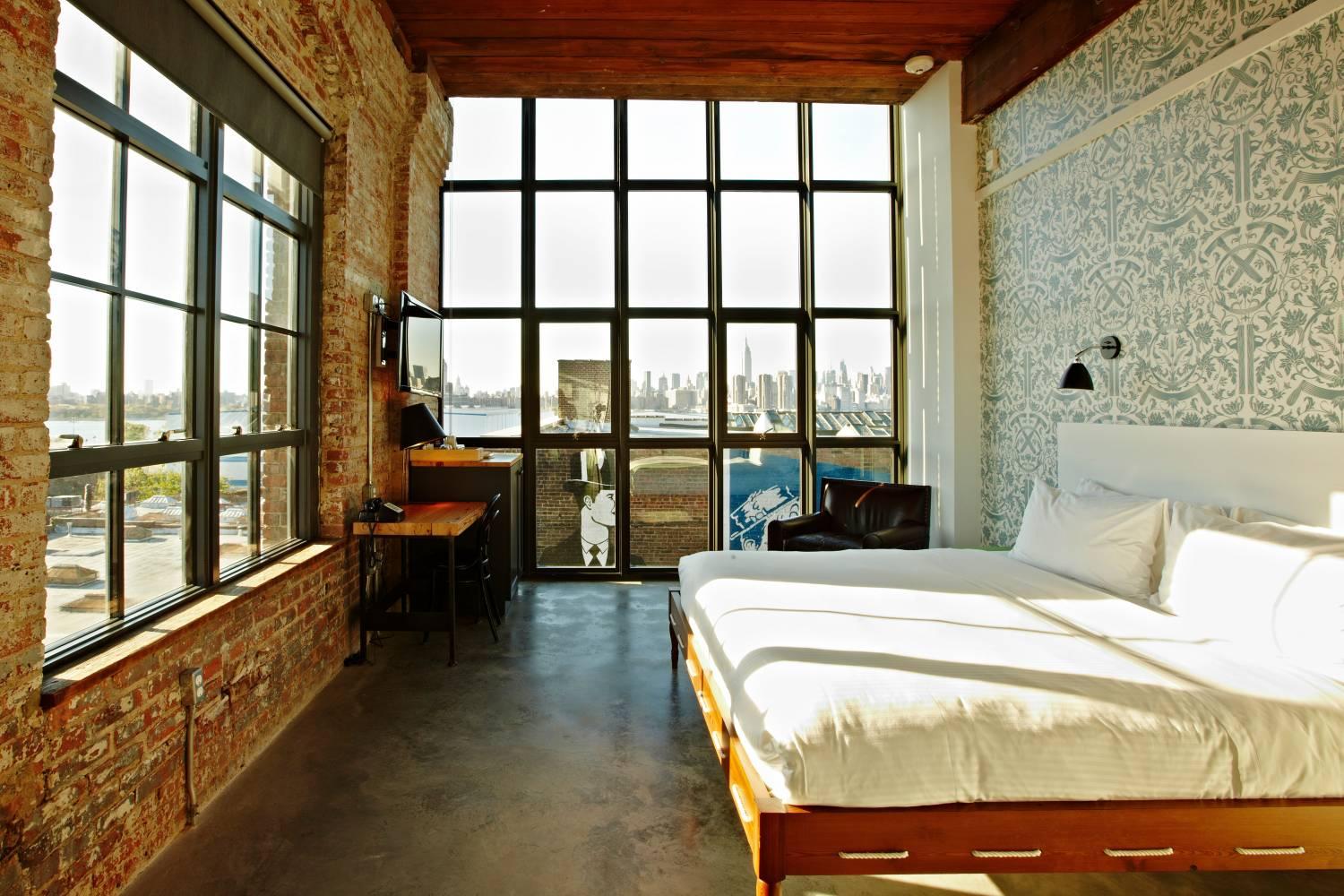 Best sense of place: The Wythe

A former textile factory, The Wythe’s pine-beamed, brick-walled, cast-iron-columned bedrooms overlook Brooklyn’s (current) beer brewery, making this the most authentic of the crop of hip hotels in this corner of Brooklyn. It’s also the most appealing, thanks to the attention to detail by the owner Andrew Tarlow, the man behind hipster delicatessen, Marlow & Sons. The minibars are packed with superior snacks, and there’s a tip-top brasserie, Reynard.

In the rooms, specially made wallpapers by local artists reference the neighbourhood, while Goldie’s natural soaps are among the hyperlocal amenities. Cocktails should be taken on the Manhattan-view rooftop bar – the hotel is only a couple of blocks from the East River.

Staycation: Britons are missing out on some of the UK’s most popular attractions

A mother and teenage daughter spend three nights in Valletta

New Zealand volcano: Is it safe to travel to White Island? Will the volcano erupt again?

Flights: Passengers left horrified at female behaviour on a plane – ‘that’s so dangerous’