No crowds. A riot of autumn colours. Why Italy’s beautiful Lake Como is such a popular haunt for famous types like Jennifer Aniston

Our speed boat, with its burgundy leather interior and sleek black exterior, causes heads to turn as we cut a frothy 50 knots across Lake Como. My 14-year-old son, Freddie, is at the wheel, while Claudio Valsecchi, of Il Medeghino boat tours, remains in full control — thank goodness.

Crafted by Cranchi, boat builders on Lake Como for 150 years, this is the perfect vessel for this spectacular part of the world.

I can tell that my husband, Neil, is itching to take his turn. 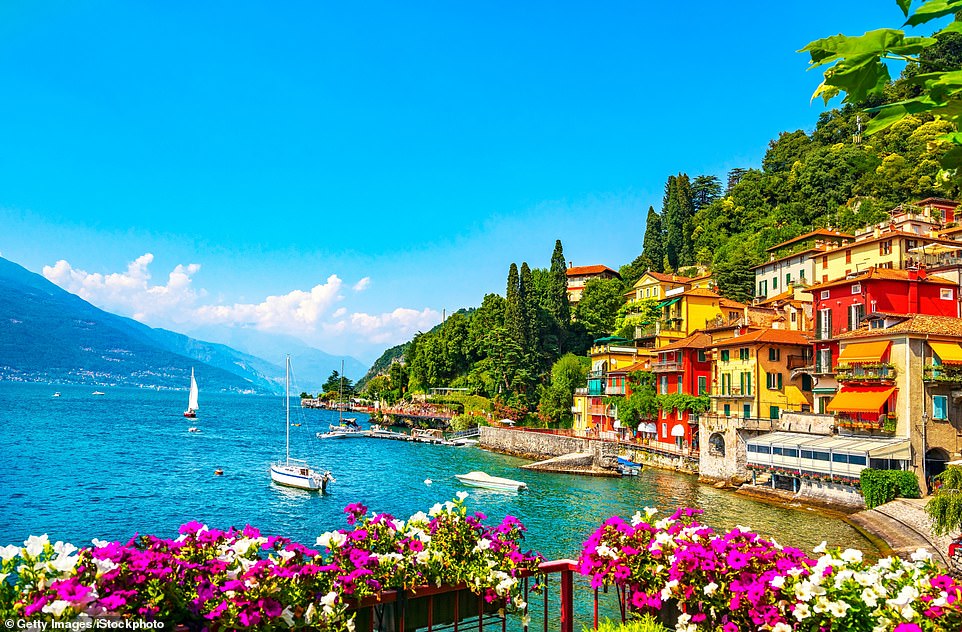 Claudio cuts the engine in front of a magnificent villa. ‘This is 16th-century Villa Pliniana. Where Rossini composed Tancredi, Napoleon played billiards and Leonardo da Vinci studied the flow of its irregular waterfall. Not all at the same time,’ he says. ‘If you’ve ¤150,000 going spare, you can rent it for the week.’

Presumably, this is the sort of place that Como regulars such as Jennifer Aniston and Beyonce can afford. Further down the lake, life looks less fancy but no less lovely at Nesso, one of Como’s oldest cliff-hugging communities.

Local children jump from a stone bridge, enjoying the cool spray from a waterfall that cascades into the lake down a slim ravine. At 1358ft, this is the deepest point on the lake and nearby fishermen cast nets for perch, used for the region’s most popular dish, riso con pesce persico (rice with perch fillets, flavoured with sage).

Checking into swanky Grand Hotel Tremezzo — where Carrie Symonds, Boris’s fiancée and mother of his son, stayed last week — we’re gifted silk face masks. Which is appropriate given that from the 1500s to the mid 1900s, Como was one of the world’s greatest silk producers.

Our room is named after the owner’s grandmother Maria, who during its renovation discovered love letters of past guests. Each evening I find a copy of one on my pillow, which, beyond the extravagant prose, give insights into 20th-century travel.

On the nearby Lavedo Peninsula is 18th-century Villa del Balbianello, which began as a monastery in the 1300s, and was converted to a villa by Cardinal Angelo Durini in 1785, and became the retreat of the explorer Guido Monzino, (the first Italian to scale Everest), who died in 1988. Monzino was a romantic, preferring to travel without modern conveniences, and it’s worth the cost of a private guided tour of the house.

Monzino redesigned extravagantly to include a map room, smoking den and private museum, in which you’ll see the wooden sleigh he used to reach the North Pole.

In the grounds we watch gardeners prune gargantuan sycamores and our guide, Daniella, tells me that the highlight of her career was hearing Gloria Gaynor sing I Will Survive under one during the wedding of a Russian oligarch. T Beach, Grand Hotel Tremezzo’s new 1950s inspired lido beach club, captures the joy of the Italian Riveria, with orange and white striped umbrellas and a pool sunk into a pontoon within the lake.

We sip Campari and wave to those aboard the pleasure cruisers, which slow to view 17th-century Villa Carlotta next door. This grand house and its 20 acres of botanical gardens is one of Como’s most visited attractions, but in the wake of Covid-19 the place is idyllically serene, with only small lizards for company as we climb its unusual triple-layered scissor staircase to explore.

We hop on a ferry which slides into Varenna’s terminal at 7pm. The town, which sprawls upwards from the port to the hill-top ruins of Castello di Vezio, is glowing, with the sun setting behind the Swiss Alps to the west.

Just below the veranda of restaurant Vecchia Varenna, kayakers in silhouette slide by, and children chase ducks in the stony shallows. 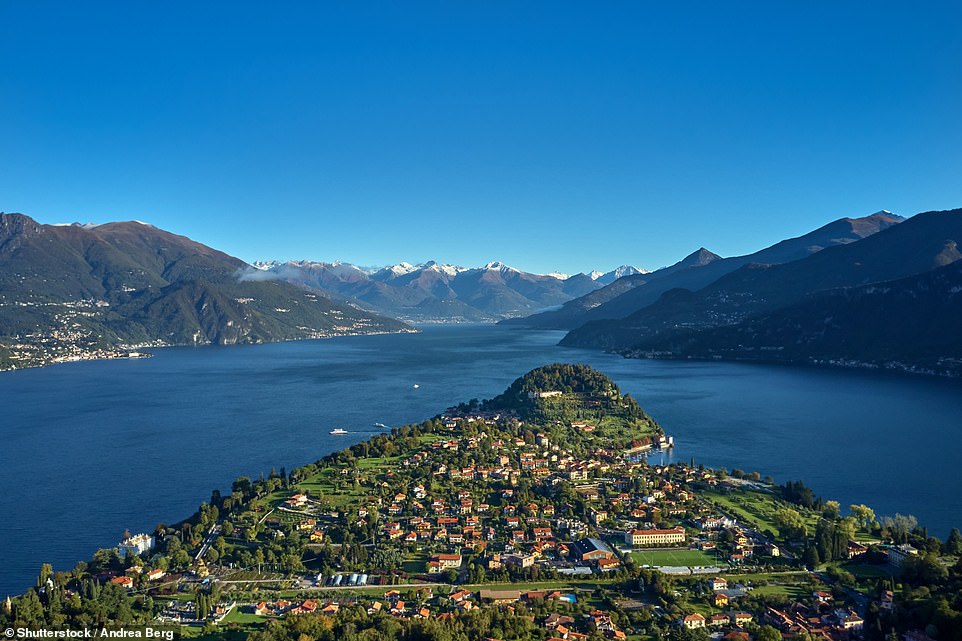 A highlight for Kate was a trip to Bellagio, pictured, where the Como and Lecco branches of the lake meet

B&B doubles at Grand Hotel Tremezzo (grandhoteltremezzo.com) for two adults and one child from £470. EasyJet (Easyjet.com) London to Milan from £39 return.

‘Try the special. Why not?’ is the advice from the waiter. Courgette and pecorino cheese with cavatelli, (pasta shaped like hot dog buns), is what arrives. We’d have been fools not to take a punt. Then there’s Bellagio which sits on the tip of the Triangolo Lariano, where the Como and Lecco branches of the lake meet. Lining the waterfront is an oleander tree esplanade leading to the gardens of neoclassical Villa Melzi, which were inspired by English landscape architect Capability Brown.

‘You’ve picked the right year to come. Last year it was crazy in Bellagio, you could hardly move on the streets,’ Mich Gandola, owner of Bellagio Watersports, tells me as we kayak out from Pescallo, a small fishing village on the other side of the peninsula and what Mich describes as his gioiello (gem).

It’s not far to the headland, past craggy cliffs where herons nest and round to Bellagio, where Mich suggests stopping for a ‘floating aperitif’. From a flask, he pours perfectly chilled bellinis.

Where the Wildflowers Grow ·