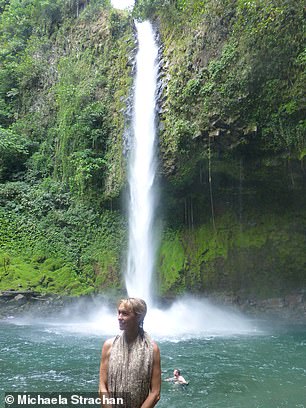 Cooling off: Michaela stands next to the Fortuna waterfall. She says she can’t wait to go back to the country

Costa Rica is the Central American country that abolished its army in 1949 and invested more in the nation’s health and education. Forests still cover half of the nation where the mantra is ‘pura vida’ – meaning ‘pure life’.

It’s a country with outrageously colourful birds such as toucans, macaws and the stunning, resplendent quetzal, but whose national bird is the rather plain clay-coloured thrush.

Because it’s very vocal before the rainy season, Costa Ricans chose this bird as it was thought to bring on the rains and help coffee-growers. This is a land that speaks my language.

It’s beautiful, full of wildlife and has rich biodiversity, a progressive attitude to the environment, friendly people and plenty of adventure.

We toured Costa Rica on a Family Rainforest Adventure with Explore over 15 days in the Easter holidays. The tour is described as ‘full on’ – and they’re not kidding. Don’t expect to come home rested, but do expect to come back rejuvenated and with a camera full of amazing memories.

If you fancy a holiday that connects your kids to the natural world, ignites their thirst for adventure and gives them little time to go on to their iPads and phones… this is the trip for you. 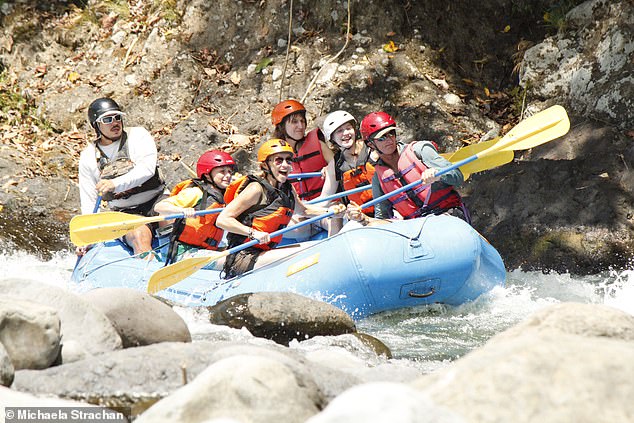 Action packed: Michaela and her family white water rafting on the Pacuare River on their trip to Costa Rica

Our tour was with two other families we’d never met before, but within a day we’d bonded. My son Ollie is 12 and the other boys were ten, 12 and 15. They had a common obsession with football, so instantly connected.

Travelling with families you’ve never met may seem risky, but this is the second family tour we’ve done with Explore and both times it’s worked exceptionally well.

So what was so special about Costa Rica? Let’s start with the natural environment. If you love wildlife, it has to be on your bucket list. It’s one of the most biodiverse countries in the world with 186 protected areas, including 27 national parks.

If you’re a birder, it’s paradise. With so many different habitats in a relatively small country, the flora and fauna can be mind-blowing. Rainforests, cloud forest, tropical dry forests, beaches and mangroves, all packed in-between the Caribbean and Pacific oceans.

Although there are large mammals such as pumas, jaguars, ocelots and tapirs, you’d have to be lucky to see them. There are about 250 mammal species in Costa Rica, 110 of them bats.

Top of the list of mammals to spot is the sloth, and we were lucky enough to see one close up. Usually you see them right in the top of the canopy through a pair of binoculars, but our best encounter was with one in the lower branches, so close we could have touched it.

They’re chilled, relaxed animals that are so slow algae grows on their fur. They’re extremely cute and lovable, with a definite resemblance to ET. 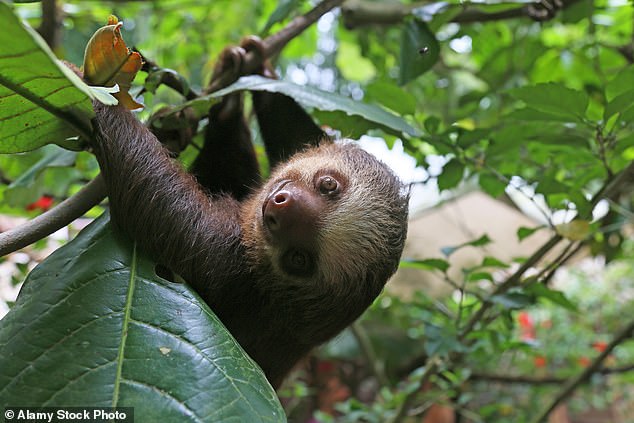 Animal magic: Michaela came face to face with a variety of animals including a sloth, pictured

Monkeys are fairly easy to see, especially the howler monkey whose roar can be heard miles away and at dawn provides the perfect wake-up call.

But it’s not the mammals that make Costa Rica such a wildlife paradise, it’s the birds. There are just under 900 species and an experienced birder could see 300 in a day.

My list of just 80 species looks rather pathetic, but we did spend quite a lot of time in search of the really sexy birds, including the resplendent quetzal. It is considered one of the most beautiful birds in the world with its green crest, crimson belly and long emerald tail plumes.

The thing with birding is that you sometimes have to be in the right place at the right time.

Being in Monteverde National Park in the breeding season gave us the opportunity of spotting two stunning males. Toucans are also must-sees with their large, colourful beaks. Hummingbirds are everywhere but hard to identify as they never stay still.

One of my favourite birds was the sunbittern, whose stretched-out wings have a butterfly-like pattern. 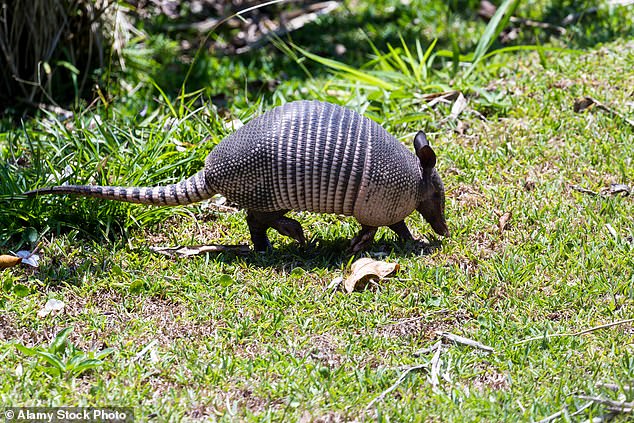 There are also lots of iguanas, basilisks that run across the surface of the water, crocodiles, turtles and so many beautiful butterflies and frogs.

The natural environments were amazing: the mystical cloud forests of Monteverde, thick with mosses, ferns and orchids; the rainforests of Tortuguera, crawling with life from leafcutter ants to woodpeckers; the picture-postcard waterfall at Fortuna with its crystal-clear pools; and Arenal volcano, which erupted unexpectedly in 1968, destroying a town, and continued to erupt regularly until 2010.

And so on to the adventure. It seems Costa Ricans have a thirst for adrenaline, and so have the tourists. Our highlight was the whitewater rafting on the Pacuare River near the town of Turrialba.

It’s quite amusing to be bird-spotting in between the rapids, then screaming, paddling and clinging on to the raft for dear life. 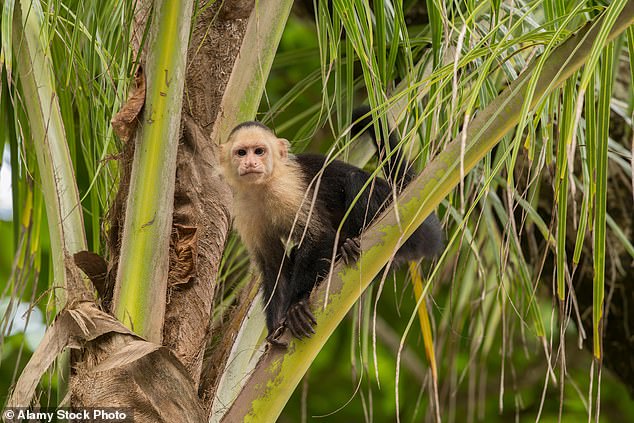 A cute capucin monkey poking out from the trees. Monkeys are fairly easy to see in Costa Rica

Zip-lining is another popular adventure and, apparently, the Costa Ricans are pioneers. If you’re a thrill-seeker, it’s a must: zooming above the forest canopy on a wire as you screech with delight, or terror!

We kayaked in Tortuguero, enjoying watching herons, kingfishers and jacanas as we paddled through the waterways and canals of the ‘mini Amazon’. We even did an inflatable-banana ride in the ocean, being dragged at speed by a jet ski. Not so sure that one was such a good idea: I’ve still got the bruises!

Along with the wildlife and adventure, Explore managed to fit in plenty of culture, too, with a trip to the museum and a church in San Jose, and a tour of the The Doka State Coffee Plantation.

We also learned how chocolate is made – from the cocoa bean to the chocolate bar – and then did a tasting session. What’s not to love about that? We were also taught how to make a local Costa Rican dish called tamales at a traditional restaurant.

We were even allowed a bit of rest: the hot springs at Arenal were a welcome treat. It was my birthday that day, so we indulged with cocktails while soaking in the steaming forest pools. A decadent start to my 53rd year.

We ended the trip at Manuel Antonio relaxing on the beach, swimming, playing football and yes, chilling.

I can’t recommend this holiday enough. When you’re someone who fights for the protection of wildlife and cares deeply about the loss of our biodiversity, degradation of habitats and vanishing species, you have to recharge your batteries with somewhere that gives you hope, a place that feeds your soul.

Costa Rica is the perfect place. It leaves you with a real feeling of pura vida – pure life.

Explore (explore.co.uk, 01252 884723) offers a two-week family trip to Costa Rica costing from £2,959 per adult and £2,340 per child including flights, accommodation with some meals, activities and a tour leader throughout. Departures include Easter holidays and summer 2019.

A trip around the world through local radio stations

Travel to Lisbon, the land of fado