Forget Hollywood, try Holywood! Why a visit to Belfast is a must for fans of Game Of Thrones and Back To The Future

Great Scot! We are only an hour or so into our trip to Northern Ireland and we have just discovered a DeLorean straight out of the Back to the Future films.

Having departed the ferry at Larne, we headed straight for the Ulster Folk and Transport Museum in, ironically enough, Holywood, just north of Belfast.

It’s there that we come across the car made famous by the Michael J Fox films from the 80s, which were, to our surprise, manufactured in Northern Ireland. 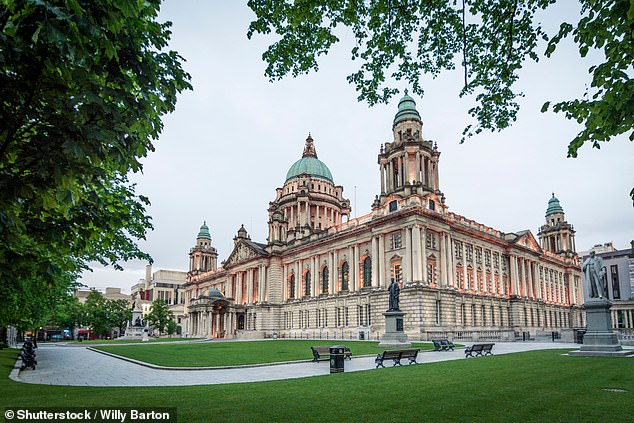 The Northern Irish capital, Belfast, has seen a boom in tourism. Pictured is the grand city hall 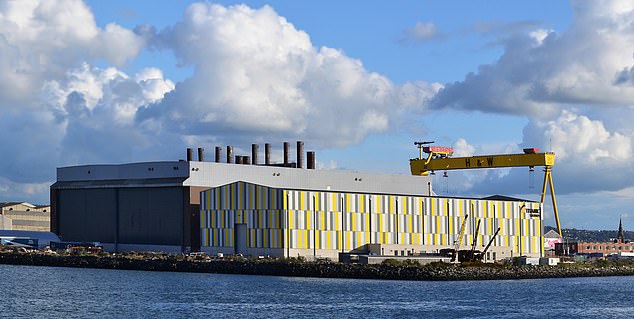 The city is currently basking in the glow of Game of Thrones, with much of the show filmed at both Belfast’s Titanic Studios (pictured)

As it transpires, taking a step back in time proves to be a welcome theme throughout our trip.

Indeed, Belfast sells its history. Not in a kitsch, clumsy manner. Rather, it is put unashamedly front and centre, in a show and tell fashion, which makes it a truly fascinating place to visit.

The city is currently basking in the glow of Game of Thrones, with much of the show filmed at both Belfast’s Titanic Studios and various locations around the country.

It has, of course, led to a boom in tourism, with those either wishing for a selfie with their favourite actor or keen to re-enact a gruesome scene heading over in Dothraki-like hordes (flight bookings to Belfast are up a staggering 1,772 per cent since 2016, according to kiwi.com).

Yet, for those who prefer their drama steeped in a little more reality, there remains much to explore and excite.

Our journey begins with the early P&O ferry from Cairnryan to Larne and it provides a relaxing, gentle introduction to Northern Ireland. 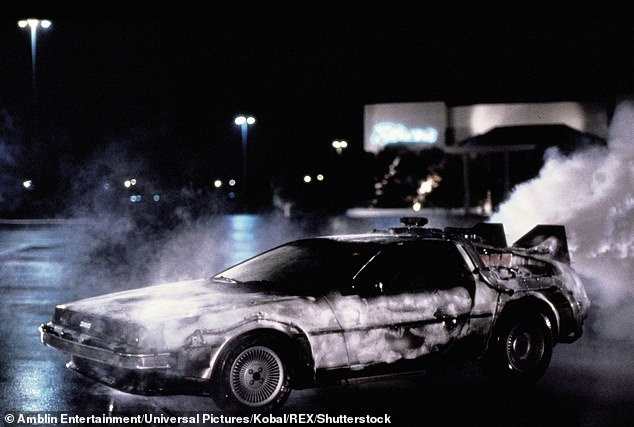 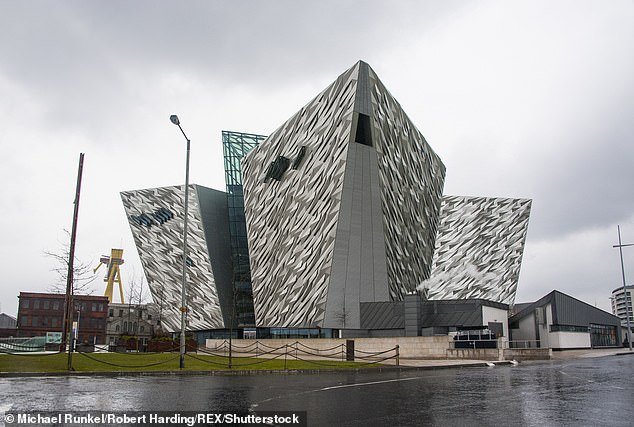 The Titanic Belfast experience, which is found on the site of the former Harland & Wolff shipyard that built the infamous liner

Boarding with the car is a smooth operation and we are quickly settling down in the Club Lounge for a tasty breakfast as the boat prepares to depart at 7.30am.

The journey takes two hours – approximately the length of a feature film – and, handily enough, there is an on-board cinema that provides entertainment for those still sleepy children.

It’s akin to a good airport lounge but with the stress of keeping an eye on gate announcements removed and we are soon ready to dock in Larne feeling refreshed and raring to go. Which is just as well, as we have a packed itinerary in front of us.

We depart the ferry and we’re off in the car, heading to Belfast. No passport control. No waiting for luggage.

Within 45 minutes of leaving the ferry, we are pulling up at the Ulster Folk and Transport Museum in Holywood, which has a Tardis like feel about it with the unassuming entrance concealing a much larger and sprawling venue. 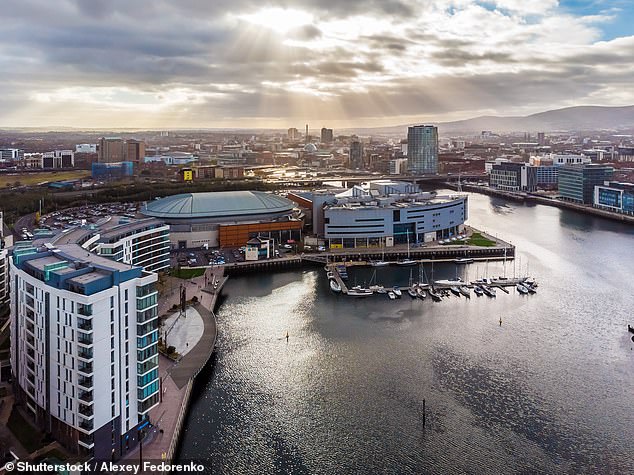 Steven says that the streets of Belfast are bustling without being uncomfortably busy. Pictured is an aerial view of the city

It is here that we come upon the DeLorean. The cars were built in Northern Ireland, a fact shamefully missing from the movies. However, it was to be a short-lived adventure with the attempt to create a specialist car manufacturing industry ultimately unsuccessful and the factory closing in 1982.

There is much to see and a small Titanic exhibition gives us a small taste of what is to come.

From there, we are a short, easy drive to the city centre and our hotel, the Grand Central.

The hotel was only recently finished and it looks stunning. The staff prove warm and friendly, and we quickly feel at home.

We decide to explore before dinner and take a stroll down to the Botanic Gardens, next to the University. The streets are bustling without being uncomfortably busy and the wide array of restaurants and cafes provides a cosmopolitan feel.

At times, Belfast is reminiscent of so many other major cities. The layout of the centre similar to Glasgow’s grid system, the style of the houses like a London borough and, where the university and gardens meet, more than a hint of Edinburgh’s meadows.

Its familiarity helps you relax and we’re soon wandering round, enjoying an autumnal ice cream.

Dippy the Natural History Museum’s iconic Diplodocus dinosaur skeleton was also visiting the city, on display at the Ulster Museum, before heading over to the Kelvingrove Museum in Glasgow so it only seems right we meet our fellow traveller.

The museum itself is worth seeing, with our two children (aged nine and six) mesmerised by some of the displays and the interactive offerings. The dinosaurs, there is more than one, are kept company by Takabuti the Egyptian mummy and a pair of dragons, made from willow, which hang from the high ceiling in awe-inspiring fashion.

There is no shortage of places to eat, or drink, and we dine out at a restaurant in the city centre called Howard Street, which is warm and welcoming and has a homemade fish pie that, upon finishing, makes you long for a satisfying lie on the couch. And rest is required, for the next day is the big one. The now famous Titanic Belfast experience.

It is found on the site of the former Harland & Wolff shipyard, who built the doomed liner, in the city’s Titanic Quarter. 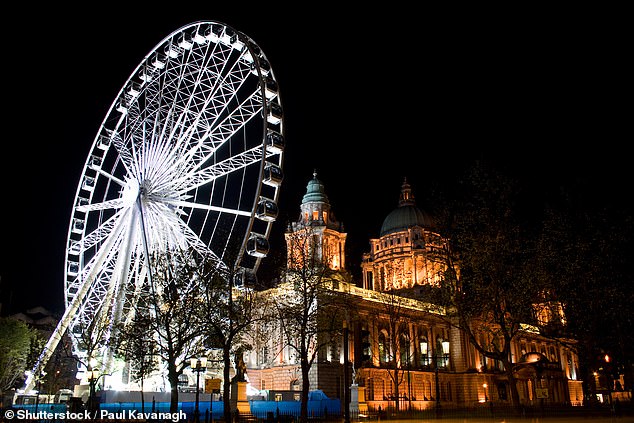 It’s an area of Belfast where the past and future collide, with the interactive museum alongside the Titanic studios and another fascinating piece of floating history in the shape of World War One warship HMS Caroline.

You could easily spend hours taking everything in. The story of the Titanic, from birth to murky death, is laid out in wonderfully creative detail. Plenty for the geeks but no less entertaining for the children.

While the gentle ride round the great ship being built is fun, low on speed but high in interest, the transparent floor at the end, offering a look down into the Titanic’s final resting place, is a remarkable finale.

Despite the depth the experience goes to, it still leaves you wanting to learn more about this extraordinary piece of history.

It’s rather fitting, then, that we set sail on our own mighty boat for home, the wonderful ferry, and the two hours once again pass peacefully and enjoyably. A return trip will definitely be on the cards.

P&O Ferries’ fares start from £84 each way from Cairnryan to Larne for a car and driver. For further information on all sailings and the latest P&O Ferries offers please visit poferries.com or call 0800 130 0030.

5 top tables under the African stars – A Luxury Travel Blog