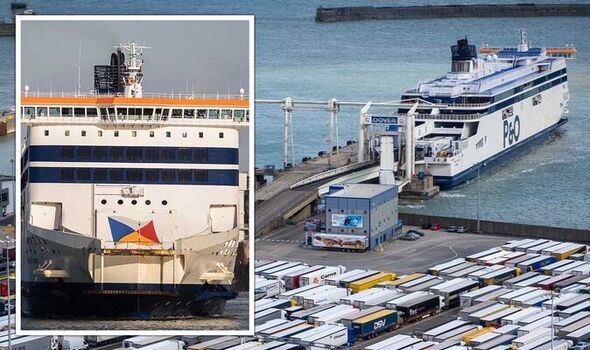 P&O Ferries has paused its services ahead of a major company announcement which is due later today. Its fleet of more than 20 ships have been ordered to stay in port until further notice, though the reasoning behind the decision is yet to be confirmed. The sudden announcement comes as an increasing number of western companies boycott Russian traders and impose sanctions on the country, but are the two linked? This is everything you need to know about who owns P&O Ferries.

The company is owned by Dubai-based logistics giant DP World who purchased P&O Ferries back in 2019.

According to UK Ports, DP World is a “leading enabler of global trade”, and is recognised as an integral part of the supply chain.

The worldwide company has a team of more than 36,500 employees from 103 countries and works closely with governments, shipping lines and other important constituents.

What do we know about the announcement?

All major routes between Britain, France and Ireland have halted sailing, though the company has insisted that it is not going bust.

Confirming the route will be off for a number of days in a post on Twitter, which read: “P&O Ferries services are unable to run for the next few days. We are advising travellers of alternative arrangements. We will update this feed every 30 minutes with the operational situation.”

A spokesperson for P&O Ferries said: “P&O Ferries plays a critical role in keeping trade flowing, supply chains moving, and connecting families and friends across the North and Irish seas and the English Channel. We have been at the heart of this service for years and we are committed to serving these vital routes.

“However, in its current state, P&O Ferries is not a viable business. We have made a £100m loss year on year, which has been covered by our parent DP World. This is not sustainable. Our survival is dependent on making swift and significant changes now. Without these changes there is no future for P&O Ferries.”

The firm went on: “These circumstances have resulted in a very difficult but necessary decision, which was only taken after seriously considering all the available options.

“As part of the process we are starting today, we are providing 800 seafarers with immediate severance notices and will be compensating them for this lack of advance notice with enhanced compensation packages.

“In making this tough decision, we are securing the future viability of our business which employs an additional 2,200 people and supports billions in trade in and out of the UK.

“And we are ensuring that we can continue serving our customers in a way that they have demanded from us for many years.”

P&O’s actions have sparked concern amongst both its passengers, staff and even the Government.

According to Sky News, Transport Secretary Grant Shapps expressed concern at the suspension of sailings.

Mr Shapps said: “I am concerned with this news which is breaking on P&O Ferries. I understand they have temporarily paused their operations and that’s causing disruption at the short straits – Calais-Dover – as well as some other ports”.

He added that he will be having “urgent discussions” with his officials to establish the circumstances of the decision.

Music starts for Earthlings around Area 51 events in Nevada