Isn’t it fascinating how we can interpret the same things so differently? When a crew member on our expedition cruise describes the first possible excursion – a steep hike through a Patagonian forest – the words that leap out at me are ‘muddy’, ‘challenging’ and ‘not for everyone’. However, my three teenagers hear only ‘fun’ and ‘exciting’. They are emphatic: ‘We’re doing it!’

My twins, Nathalie and Gabriel, and their younger sister, Hannah, crave an adventure which leaves behind their city lives, and this cruise to Patagonia – a sparsely populated region at the foot of Chile and Argentina – is as adventurous as it gets.

Our ship is the new 210-passenger Ventus Australis, which has been specifically designed to navigate this region’s islands and the Tierra del Fuego islets – a treacherous, uninhabited wilderness of narrow fjords and channels. It is so remote, we are its only visitors. 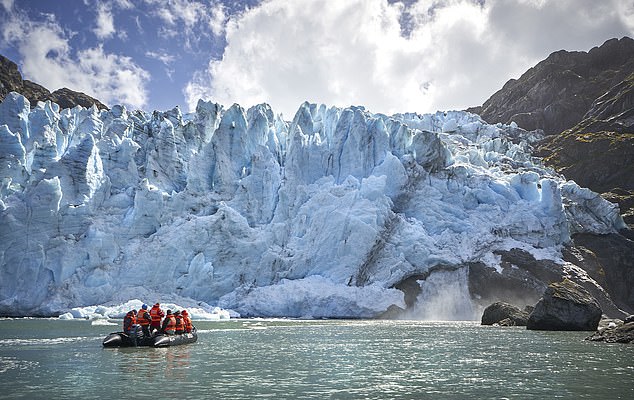 Unforgettable adventure: Passengers from Ventus Australis are taken to their next land-based excursion in Patagonia in small inflatables

We prepare for our first disembarkation, but even if we never set foot on land I would be perfectly content as the ship is quite simply divine. Cabins are deluxe, food is gourmet and excellent Chilean wines are included in the price.

Better still, travel in December, as we did, and this luxury is surprisingly affordable: one child goes free per parent. A bargain, which explains why there are so many youngsters on board, all chomping at the bit to get boots stuck into that mud.

Pretty soon we’re donning lifejackets and being whisked in small Zodiac boats towards a beach, zipping through a fjord surrounded by vast, snow-capped mountains. It’s here that the challenging 90-minute hike begins.

Mud is indeed plentiful as we follow our guide Vicky up a shrub-coated moraine – a landmass created by debris from a former glacier. Instead of dwelling on each calf-high squelch, I marvel at how pure the air is and the wildness of the scenery; how the sea is a glorious blue flanked by the statuesque, never-ending Andes.

I’m also mindful that we’re following in the footsteps of Charles Darwin, who twice stopped off in Tierra del Fuego while sailing in HMS Beagle in 1832.

Reaching the summit is thrilling enough, but there’s another treat at the top. ‘Look!’ My kids point skyward. Two Andean condors – the largest flying birds in the world – soar overhead. 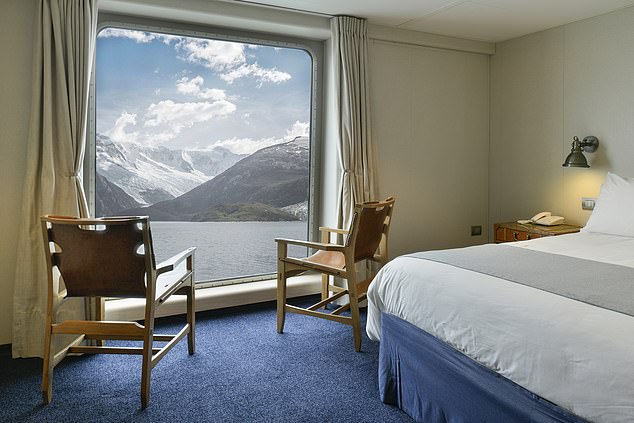 The new 210-passenger Ventus Australis has been specifically designed to navigate this region’s islands and the Tierra del Fuego islets. Pictured is one of the cabins 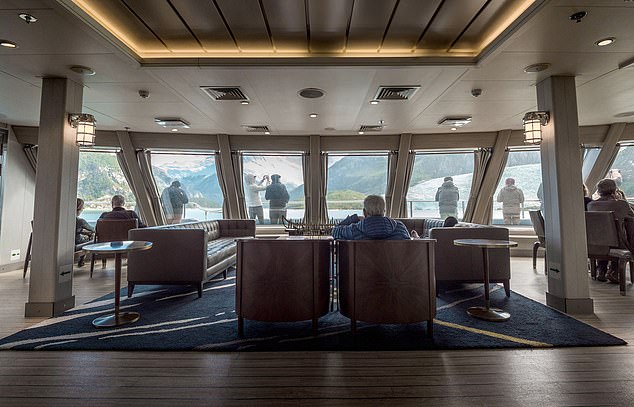 Thanks to floor-to-ceiling windows in the lounges, you can gaze at the unforgettable scenery

Our four-night voyage has a fixed itinerary, with two excursions offered on most days.

But the crew warn us that Mother Nature might prevent certain landings, such as our visit to Cape Horn, the southernmost point of South America where the seas are notoriously rough.

For now, the schedule runs like clockwork. There’s time for a buffet lunch, where I feast on parmesan asparagus, king crab souffle and smoked salmon salad. And then we’re back in the Zodiacs, where my normally surly son becomes unrecognisable by pulling (and maintaining) a megawatt smile to rival that of Tom Cruise.

Why? Because we spot a penguin colony on a beach and Gabriel, like everyone else in our boat, goes potty over these comical birds.

This year is the 500th anniversary of the discovery of the strait at the bottom of South America by explorer Ferdinand Magellan – after whom this breed of penguin is named – which enabled him to lead the first ever circumnavigation of the world.

Back on board Ventus, there’s no wi-fi or TV, and we all agree this is a good thing. We immerse ourselves in our surroundings, watching glaciers glide past and dolphins frolicking. And thanks to floor-to-ceiling windows in the lounges, we also multi-task – gazing at the scenery and playing cards simultaneously.

Then there are expedition lectures given on subjects such as global warming and Patagonian icefields, not to mention crew-led karaoke and quizzes. But it’s the land adventures that give the biggest thrill, where the choice is always an educational amble or a physical challenge. Guess which one my brood inevitably picks? 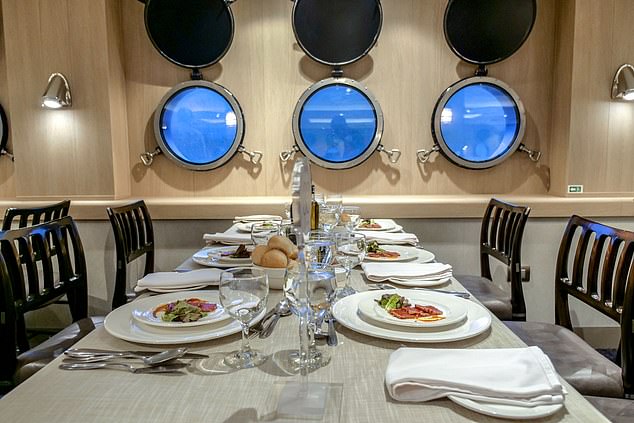 ‘Cabins are deluxe, food is gourmet and excellent Chilean wines are included in the price,’ writes Jo Kessel

That’s how I end up huffing and puffing on the hike, but when I reach the summit, the view leaves me with a huge sense of accomplishment.

That’s also how I end up clambering across slippery rocks for an hour until I’m looking down over Pia Glacier, a sheer, jagged, ice-blue sculpture on a truly giant scale. It’s one of Patagonia’s success stories – a glacier that’s advancing instead of retreating – and the ice on top of it looks almost fluid, as if in motion. Pia Glacier is the size of Santiago, where our adventure began.

We had spent three nights at the new Mandarin Oriental, from where we’d explored the Chilean capital, and at the time I couldn’t have imagined being anywhere more exciting and vibrant. But then we’d flown south to Patagonia, which felt vast and vital. Just being there made us feel like pioneers. 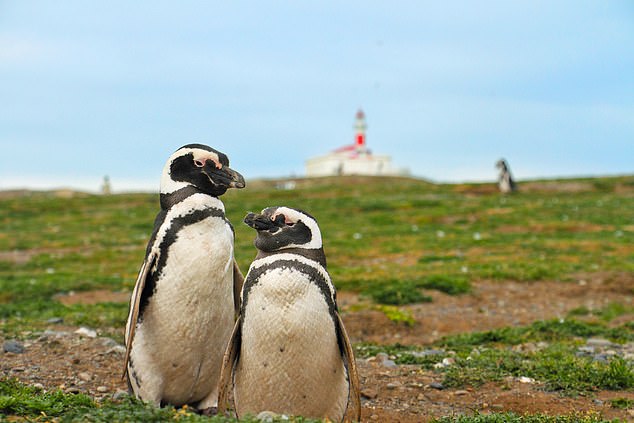 Home turf: Enjoy a visit to a penguin colony

Over the centuries, an estimated 12,000 sailors have drowned off Cape Horn, the point at which the Atlantic and Pacific Oceans meet, but the water is reassuringly flat on our trip. And so we become some of the privileged few to tread on South America’s southernmost terrain. ‘On a good day you can see Antarctica from here,’ jokes a crew member.

The white continent is 500 miles away, and this is the last land before you reach it.

We began our voyage interpreting what this holiday offered very differently, but by the time we pull up anchor to head home, we’ve found we all loved not seeing any other people or civilisation. The unforgettable scenery is extraordinary. And we all agree that being at the end of the world has made us reluctant to return to our urban lives.

Journey Latin America (journeylatinamerica.co.uk) offers a seven-night holiday in Chile and Argentina, staying at the Mandarin Oriental in Santiago, and a four-night Cape Horn & Patagonia Australis cruise, from £3,022 per person. Price includes BA direct flights, transfers, excursions and most meals. Under-17s sharing a cabin with an adult travel free during December on Australis cruises (australis.com).

U.S. Government to Roll Out Facial Recognition Software in Most Airports in Four Years

Walks near me: Escape the city with one of these walks near London