Our very own love island: Welsh rugby star Liam Williams romances his girlfriend in the luxury of a top Barbados resort

My girlfriend Sophie had told me how blue and clear the water is in the Caribbean, but I couldn’t believe it when I saw it with my own eyes. It was incredible.

I hadn’t really known what to expect. Sophie has been to Antigua, but I’d never been to the Caribbean before, so Barbados – and the Sandals Royal Barbados resort – was an amazing new experience.

It’s a bit different from Barry Island – just a touch! It was so romantic, with great beaches, beautiful sunsets and lots of sunshine – our very own Love Island! 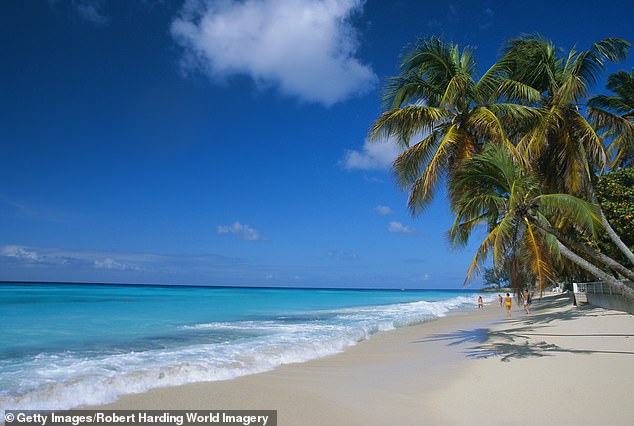 Rugby star Liam Williams was impressed by the standard of beaches in Barbados. Pictured is Worthing Beach

When we were deciding where to go, we read all about this new Sandals on Barbados. Some of the reviews were just ‘wow’, so I thought we needed to go. I’ve been to some pretty exotic places to play rugby – Australia, New Zealand… Twickenham – but it’s not the Caribbean, is it? It’s on another level.

We spent ten nights at the adults-only Sandals Royal Barbados in the south of the island. It’s all-inclusive so that meant pretty much everything was included – unlimited premium drinks as well as food, land and water sports, even scuba-diving.

Sister property Sandals Barbados was right next door so we had a fantastic choice of 17 restaurants and 12 bars, including a swim-up bar and a beach bar, to go to. There are six pools plus spas and gyms.

Rooms have balconies, some with an outdoor tub. Suites have extra things such as a separate living room. We had our own personal butlers – three of them! 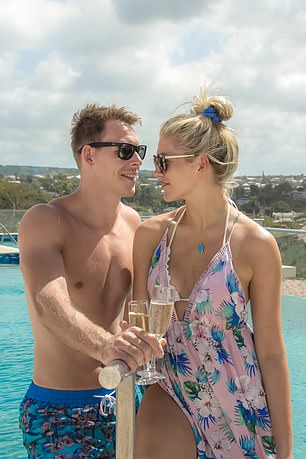 When we arrived at the resort, one of them gave us a phone so we could ask her to bring us what we needed.

There were plenty of sports and activities – snooker, yoga, kayaking, boat trips, cricket, you name it – but we didn’t take advantage of all of that, though we did play darts.

I used to surf, but don’t have that much time any more, especially now I’m based in London with Saracens. I did watch a game of pool volleyball but didn’t want to go in there because I’d be ultra-competitive and I was on holiday!

I had a couple of weeks off when Wales toured Argentina and the US recently because last year was such a long year for me.

What with the Lions Tour, my games with my previous club Llanelli Scarlets and Wales, I’d been playing rugby almost continuously for two years. I’d picked up a couple of injuries in my hip, then my shoulder.

So Sophie and I just chilled a lot in Barbados or went to the beach. It was nice to switch off.

I sat by the pool with my laptop and watched the boys out in Argentina on TV, a can of lager in my hand… beautiful. 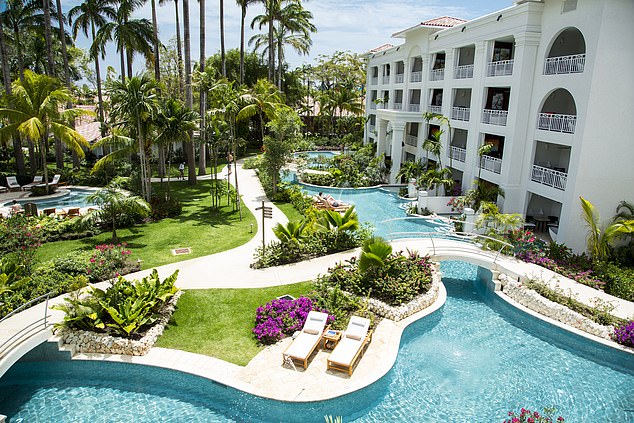 The couple spent ten nights at the adults-only Sandals Royal Barbados, pictured, in the south of the island

We did do a few excursions, though. We went out on a huge boat and swam with turtles. There was a three-course meal on that trip, too. On a tour of the island we went to an animal sanctuary and I had a monkey feeding out of my hand. It was incredible.

We’d go up to the room around 5pm because Sophie had to get ready for the evening out – and you know how that works.

We’d go out to eat at about 7.30pm. The food was almost Michelin-star standard in many of the restaurants. We went to the Bombay Club – Sandals’ first Indian, apparently – plus there was Caribbean, Italian, Japanese, a steakhouse and a French cafe.

When I’m playing, I don’t stick to a strict eating regime but I do have to keep myself in shape – I’m 27, 6ft 1in and 13st 10lb – and watch what I eat, with lots of carbs and fruit. But out of season, you can give yourself a bit of a treat.

I’m from Swansea, so we have some good beaches, Mumbles and Rhossili, which are really nice. But it’s not quite Barbados – which is definitely my number one…

Sandals (sandals.co.uk, 0800 597 0002) offers seven nights all-inclusive in a suite at Sandals Royal Barbados from £2,119pp, including flights and transfers.

Action stations: a family activity break in the French Pyrenees