The day before lockdown 2 in England, I’m walking alongside a stream on a frost-crisp morning, making the most of the winter sunshine before my movements are restricted for another month. To one side of the stream is a Sainsbury’s superstore that appears to be under siege, a queue already snaking around the block; to the other is a high street choked with traffic crawling up to Clapham.

As I make my way between the shoppers, a man wearing an anorak and a backpack steps off the footpath and pushes through the bushes to the riverbank. He is armed with a small fishing rod and casts a hook baited with bread into a channel of clear water running between two ribbons of ranunculus weed. I stop to ask him what he’s fishing for.

“Anything that’s in there – mostly chub and dace,” he says. “There’s trout further up … but a lot of them have been poached.”

You don’t expect to have a conversation about catching trout in Colliers Wood. But then you don’t expect to find a chalk stream, fabled habitat of the wild brown trout, running through an unprepossessing suburb of south-west London. This is the River Wandle, which rises in Carshalton, runs into the Thames near Wandsworth and, the fisherman tells me proudly, was one of 10 most-improved rivers in England and Wales on an Environment Agency list.

Fishing an equally unglamorous stretch of the River Trent in the industrial Midlands when growing up, I used to daydream about the tranquil chalk streams of southern England. “Chalk stream fishing is beautiful. The gentle, chuckling current, the long, trailing wave of dark-green weeds, the fine trees and rich meadows, all these form a lovely setting,” wrote Roderick Haig-Brown in his 1948 fishing memoir A River Never Sleeps.

Of course, Haig-Brown was referring to the famous chalk streams of south-west England: the Frome in Dorset where he fished as a child, the Itchen and Test in Hampshire, the Avon in Wiltshire, and the Lambourn in Berkshire among others. All are pastoral idylls, and many are extremely expensive to fish. Winter is a good time to explore them less expensively – fishing for grayling during the close season when the trout are breeding, or walking their banks (mostly for free), with the chance of spotting kingfishers, dippers, voles and occasionally stoats and otters. Chalk stream walks include the Itchen Way in Hampshire; the Frome Valley Trail in Dorset, from Evershot to Dorchester; and, indeed, the 12½-mile Wandle Trail in south London.

Chalk streams hold a special place in the heart of the fisherman, as these are the rivers where the tactics for catching wild brown trout and grayling with artificial flies were devised. But they also hold a hugely important place in our global ecology. There are only 210 chalk streams in the world, and England is home to 85% of them. They run through chalk hills from Dorset, via the Chilterns, London and East Anglia up into the Yorkshire Wolds, and they are a source of clear spring water rich in minerals that supports insects, plants, fish and other wildlife. 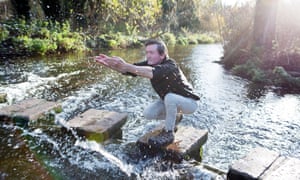 “Chalk streams have some of the most pristine water on the planet. It spends anything from six months to 60 years filtering through chalk,” Feargal Sharkey tells Bob Mortimer and Paul Whitehouse in an episode of the BBC TV series Gone Fishing devoted to his local chalk stream, the River Lea in Hertfordshire. The former Undertones frontman turned chalk stream campaigner goes on: “And we are treating them really, really badly. We’re simply taking all the water out of them and, believe it or not, dumping raw sewage into them on a monotonously regular basis. If we don’t do something, we’re going to lose them in the next three or four years.”

According to a report by the Rivers Trust in 2019, our chalk streams are in crisis from agricultural pollution and because “we simply use, and waste, too much water. On average, in Britain we use more water per head, per day, than anywhere else in Europe.”

But in September there was a call to arms with the formation of an all-party parliamentary group on chalk streams chaired by Conservative MP Charles Walker, who led a parliamentary debate on the environmental disaster they face. “We in this House lecture Brazil on the Amazon rainforest and Indonesia on its rainforest,” he said, “Yet we are appalling custodians of our own precious resources. We are not in any position to lecture anyone about the environment.”

Until the 1860s and 70s, the Wandle was a pristine trout stream, where Frederic Halford – acknowledged as the “father of modern dry fly fishing” – learned his art, fishing every summer until 1881. By the 1960s, the river was an open sewer and before that it was so full of chemicals that it once caught fire. Today, the chalk stream is in better shape, largely thanks to ongoing cleanup work by the Wandle Trust charity.

As I continue my walk upstream from Sainsbury’s, I take in the former industrial sites of what was once the “hardest working river in London”, with more than 90 mills along its banks, including William Morris’s textile printworks at Merton Abbey Mills. But I also get to see the underworld of the river more clearly. And as I stop at Morden Hall Park to watch a head of chub and dace feeding below a footbridge that leads to a garden centre, it occurs to me that perhaps the new lockdown gives me the opportunity to fulfil a long-held ambition. Perhaps I will finally be able to walk and fish a chalk stream on my doorstep.

Why you should never order spaghetti bolognese in Italy

The best things to do in Ribble Valley, Lancashire

How to See the Celestial Events, Rocket Launches, and More Happening in September