United is SHRINKING economy class cabins to make room for 1,600 premium seats on 250 of its aircraft to attract richer passengers

United Airlines is adding an extra 1,600 premium seats to nearly 250 international and domestic aircraft and introducing a first-class cabin on its Bombardier regional jets.

The move is part of a push by large U.S. airlines to attract more lucrative premium travellers. 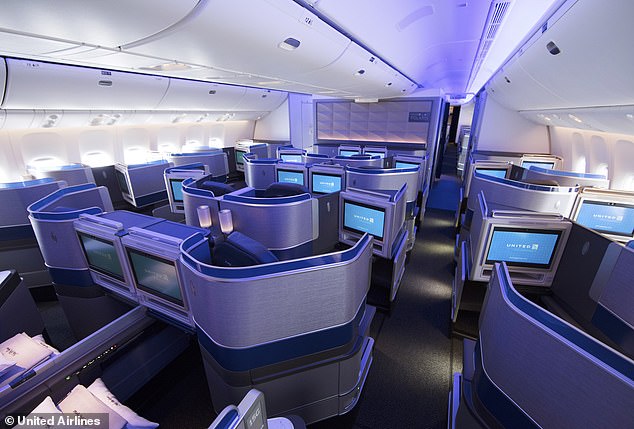 United Airlines is adding an extra 1,600 premium seats to nearly 250 international and domestic aircraft. Pictured is a business class cabin on a United aircraft On United’s mainline fleet, there will be 50 per cent more premium seating on its Boeing 767-300ERs. Business class seats, pictured, will increase from 30 to 46 A passenger tests out the lie flat bed in United’s business class cabin. The first retrofitted United planes will fly between the airline’s hub in Newark, New Jersey to London

United will retrofit 21 of its Boeing 767-300ER jets starting in the next several weeks.

It will reduce seats from 214 to 167 by shrinking the economy section while going from 30 to 46 business-class seats and adding 22 ‘premium plus’ seats.

The planes will fly first between United’s hub in Newark, New Jersey, and London.

Meanwhile, United’s new regional jet, called the CRJ 550, will be the only 50-seater on the market to offer a first class cabin, the Chicago-based airline said, providing premium travel on connecting flights from small U.S. cities to the rest of the world.

Under the plan, United will work with Bombardier to use the frame of its current CRJ 70-seat fleet for a new two-cabin, 50-seat configuration with a self-serve beverage and snack station for premium travelers and four storage closets for carry-on bags.

The CRJ 550s will eventually replace United’s current 50-seat regional fleet with a model permitted under its pilots’ contract, which became amenable in January. 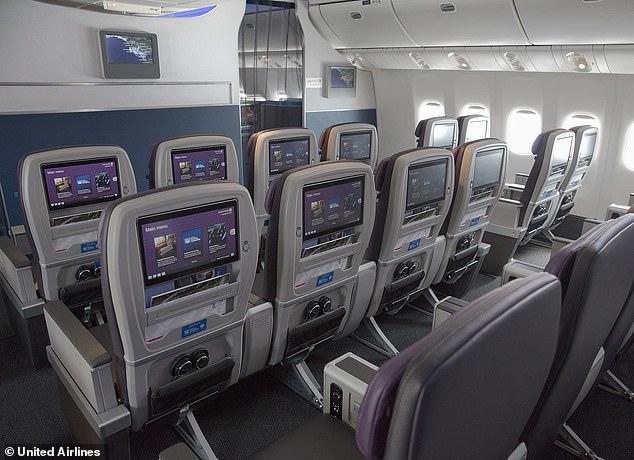 United is also adding 22 premium plus seats, pictured, on its retrofitted Boeing 767s Henry Harteveldt, an airline analyst at Atmosphere Research, said United’s announcement was a bold challenge to Delta Air Lines. Pictured is a premium plus cabin

While not generating new orders for cash-strapped Bombardier, United’s plan would allow the Canadian plane and train maker to market the new model to other U.S. airlines looking to replace aging regional jets.

Bombardier aims to take a decision on its money-losing CRJ regional jet program this year.

The new CRJ 550 will be operated by United’s regional partner GoJet out of Chicago and Newark, pending a final agreement and government certification.

Andrew Nocella, chief commercial officer for United, told reporters that ‘in an era where many airlines are adding seats to the aircraft to crowd more passengers onto the plane,’ United is ‘doing exactly the opposite’. A United Airlines Boeing 767 takes off from Zurich Airport. United will retrofit 21 of its Boeing 767-300ER jets starting in the next several weeks

Mr Nocella said United’s overall coach footprint would continue to grow despite the new seating configurations thanks to the introduction of larger aircraft like the Boeing 787 to its fleet.

Henry Harteveldt, an airline analyst at Atmosphere Research, said United’s announcement was a bold challenge to Delta Air Lines, the acknowledged front-runner among the nation’s top three carriers for its on-time performance and strong profit margins.

He explained: ‘This is big news. They are taking direct aim at Delta and its strength with premium travelers.

‘By making those 50-seat jets more comfortable, United has a good chance of attracting more business and frequent flyers.’

United is the America’s third-biggest airline by revenue, trailing American Airlines and Delta.