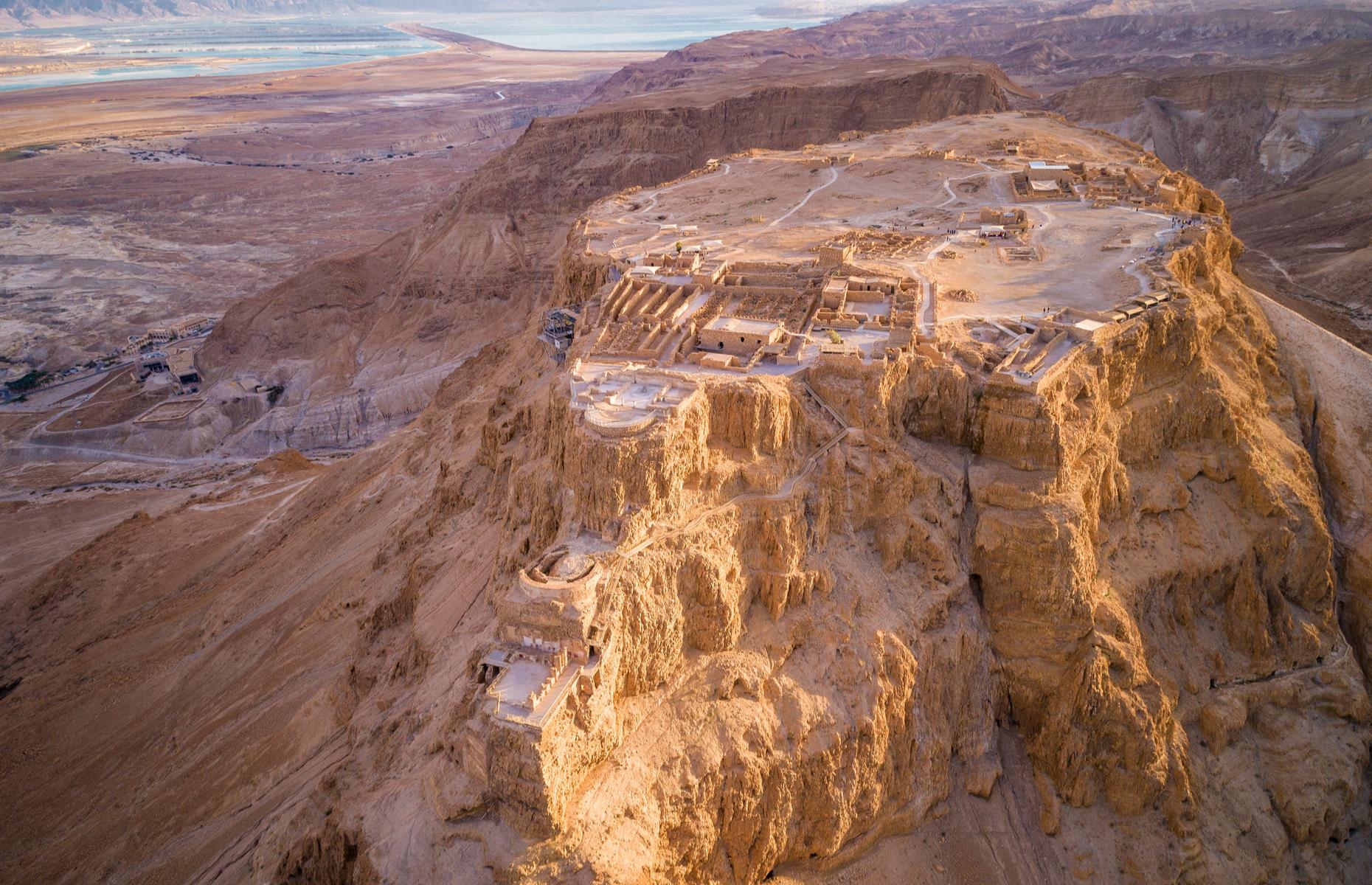 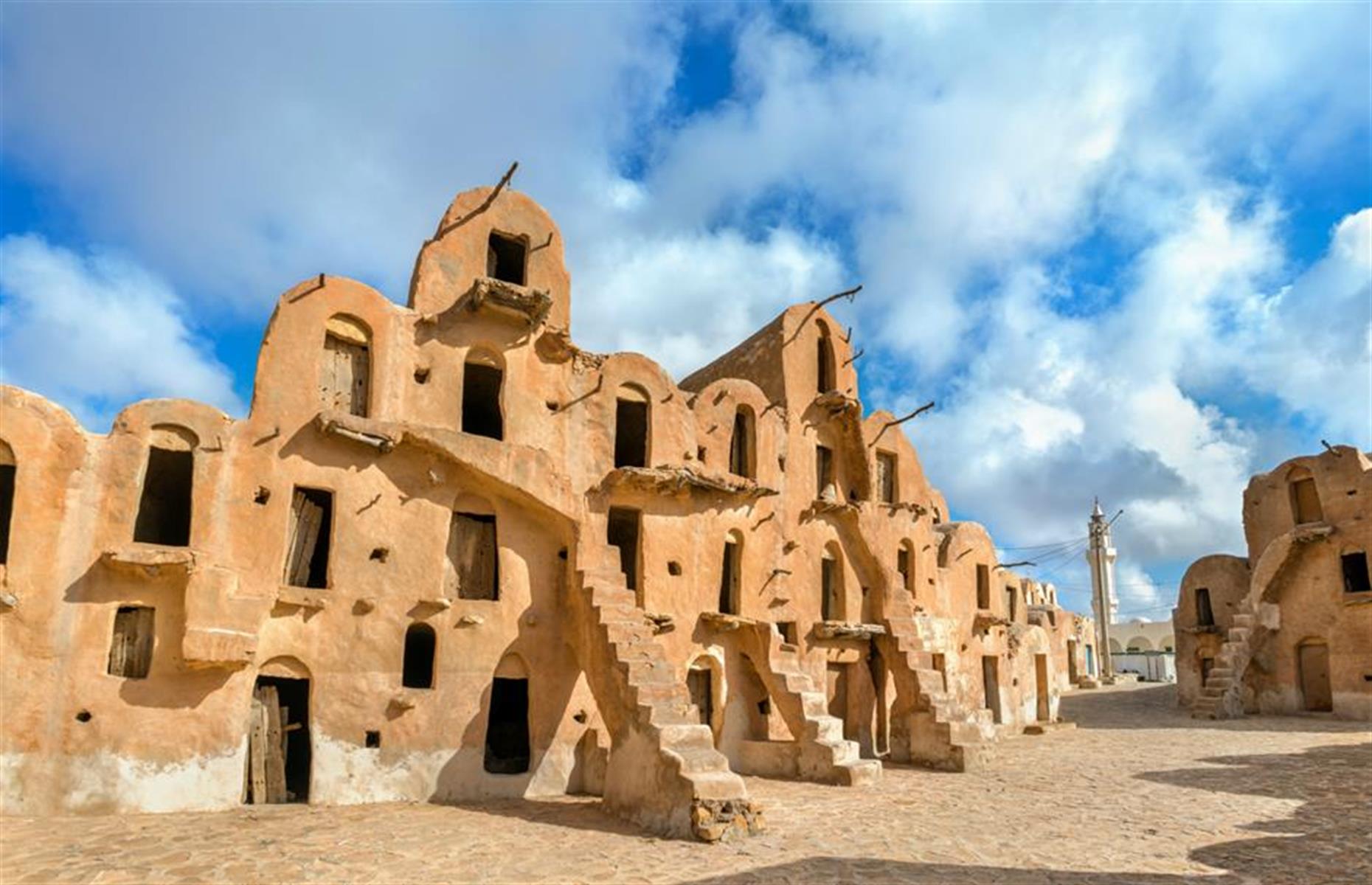 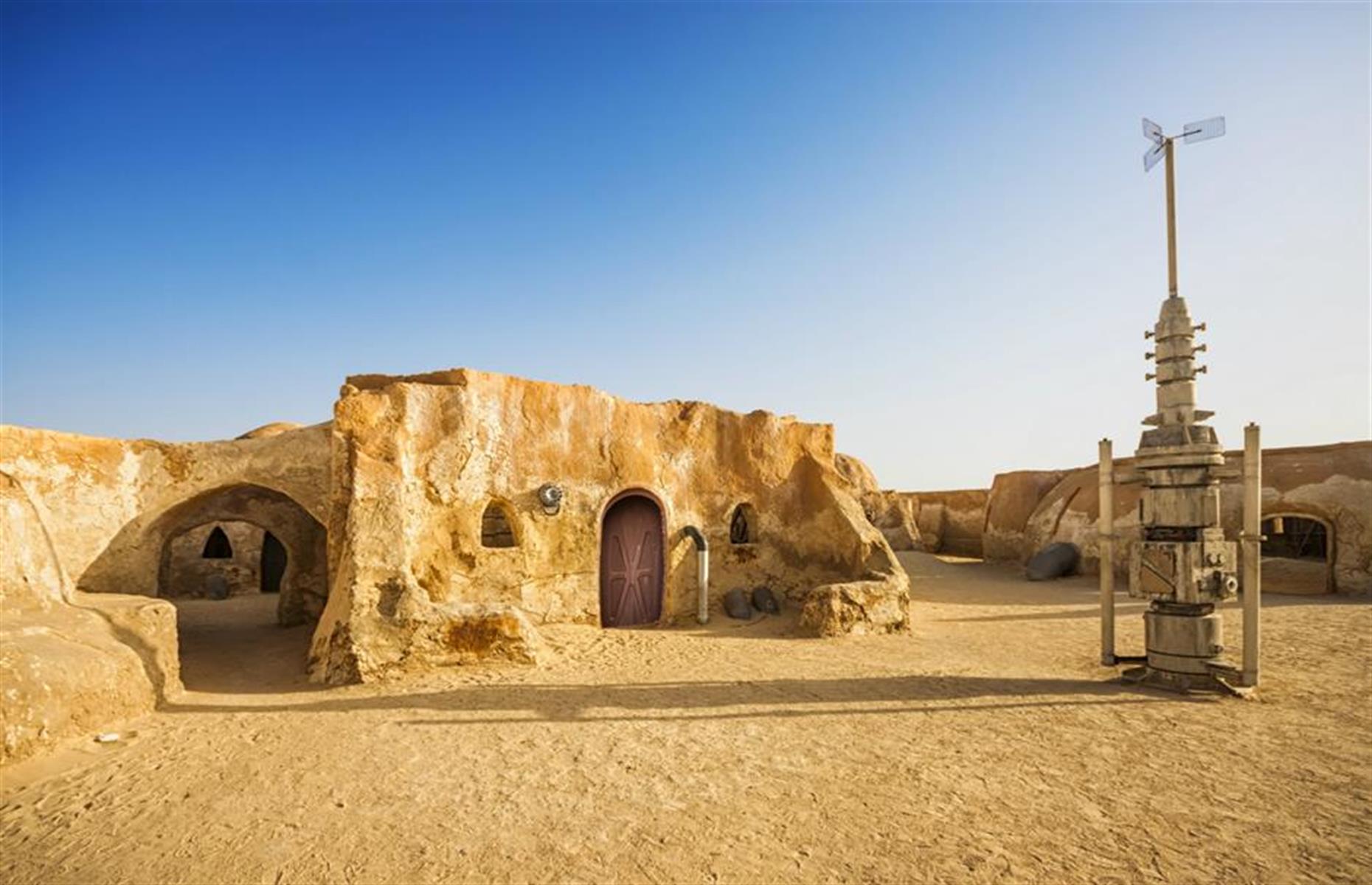 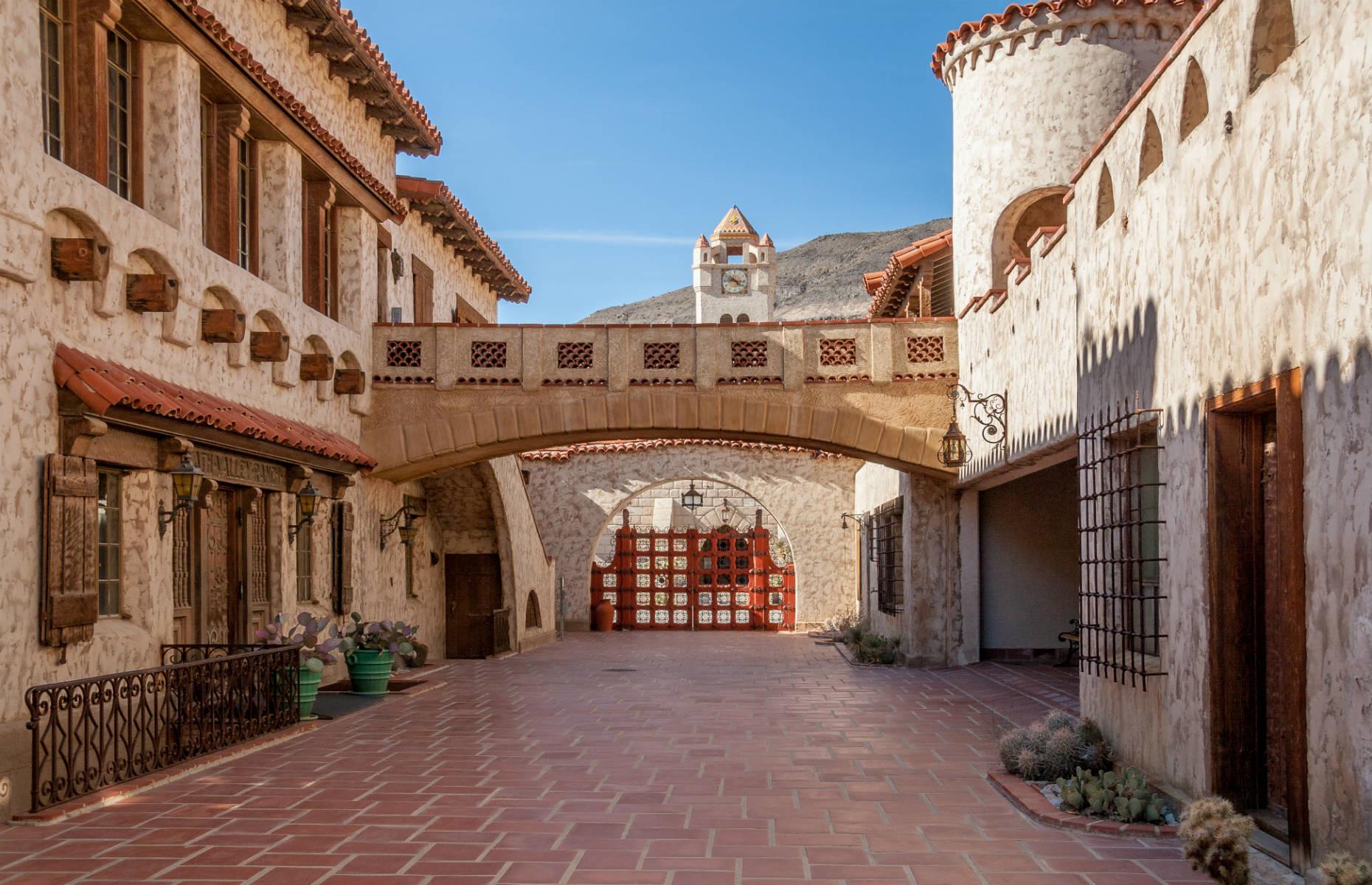 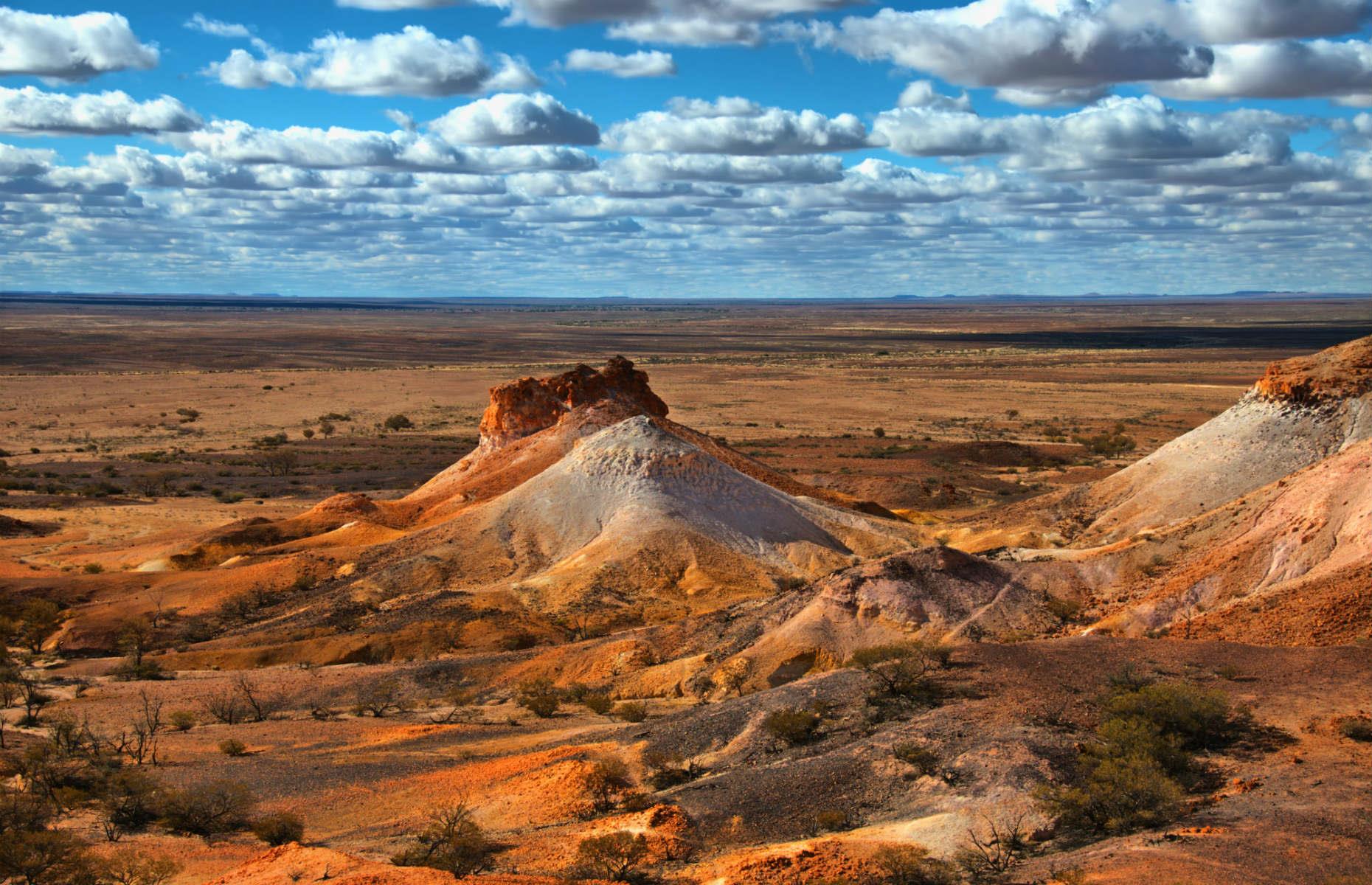 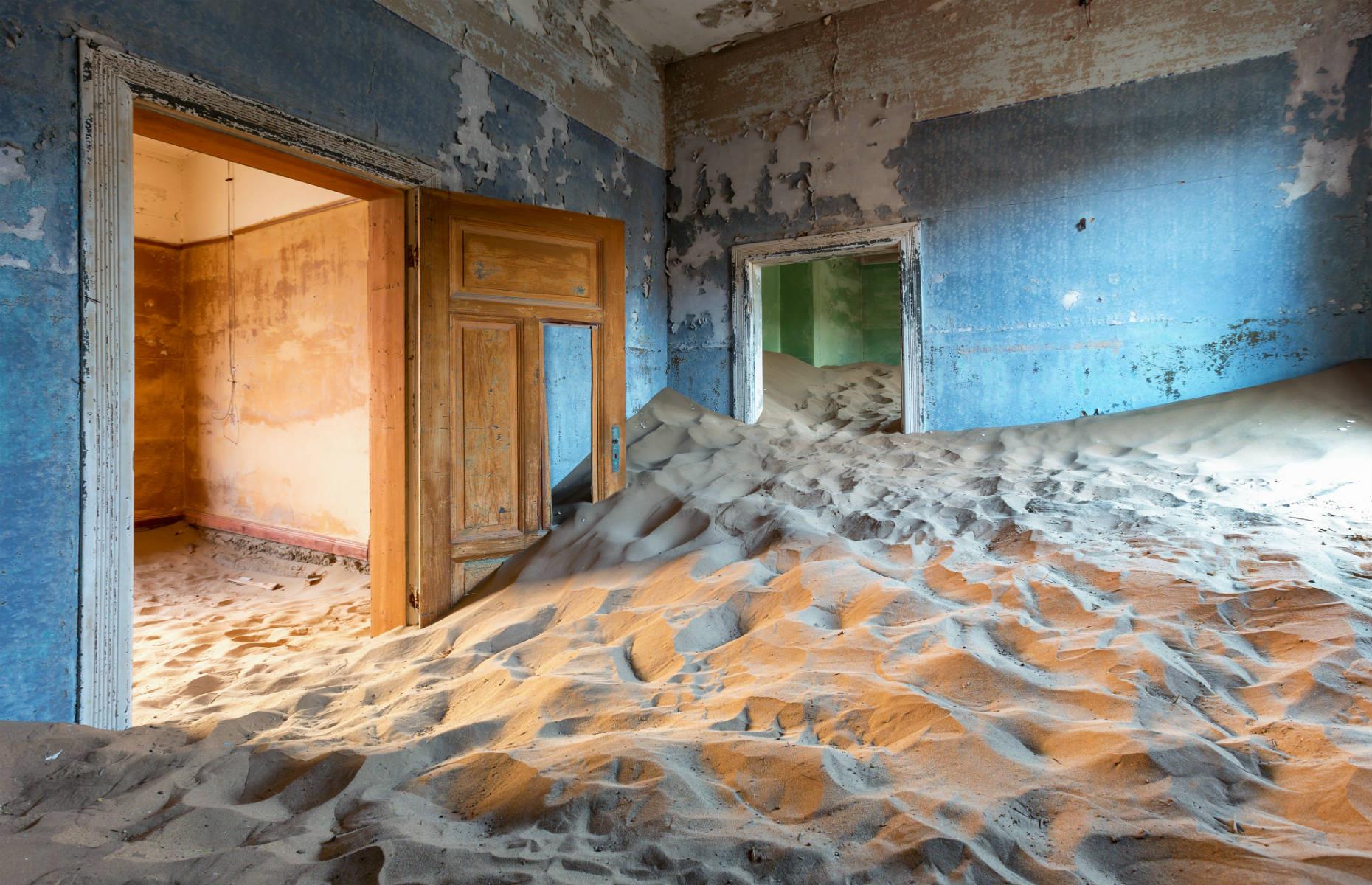 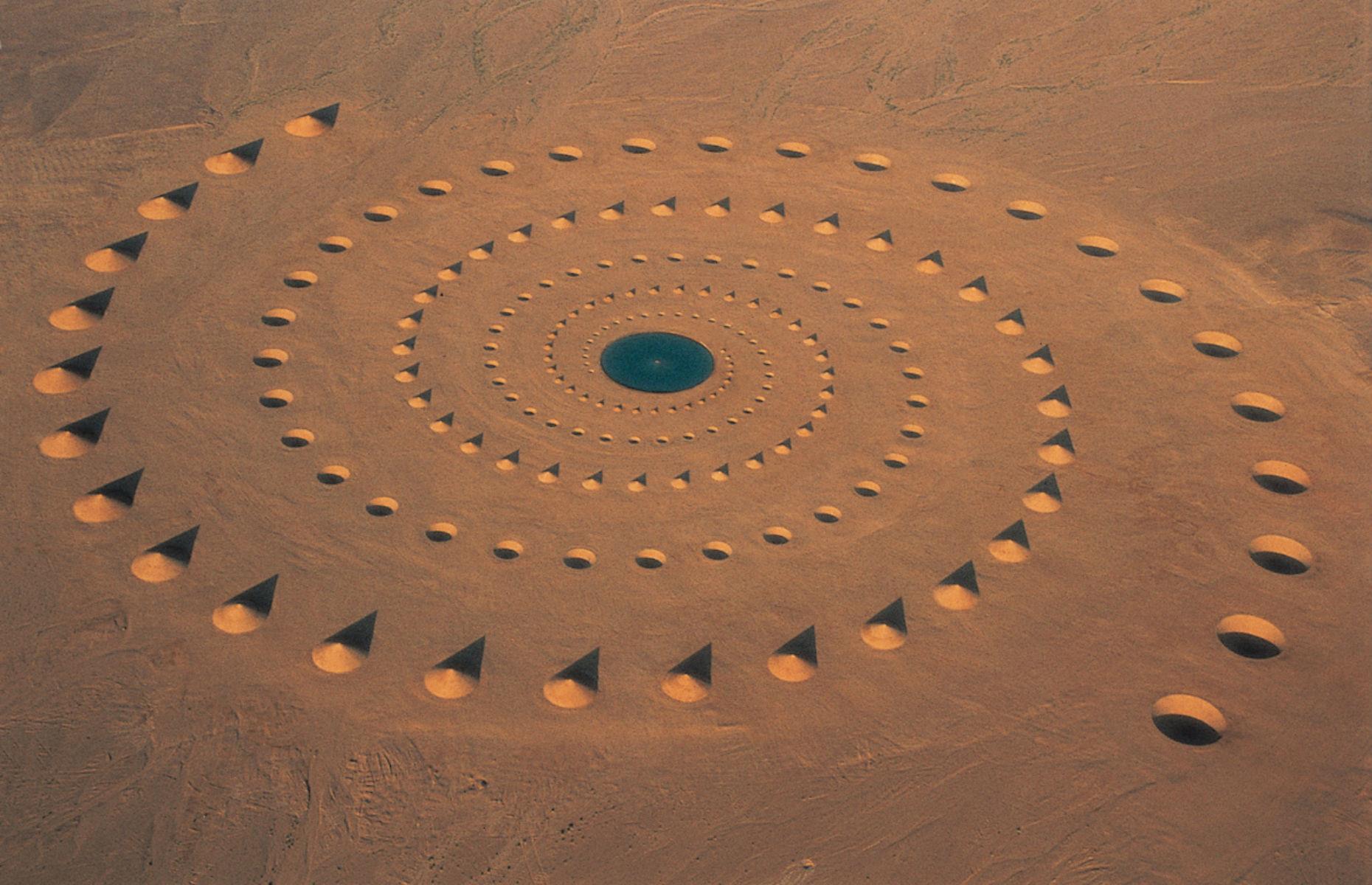 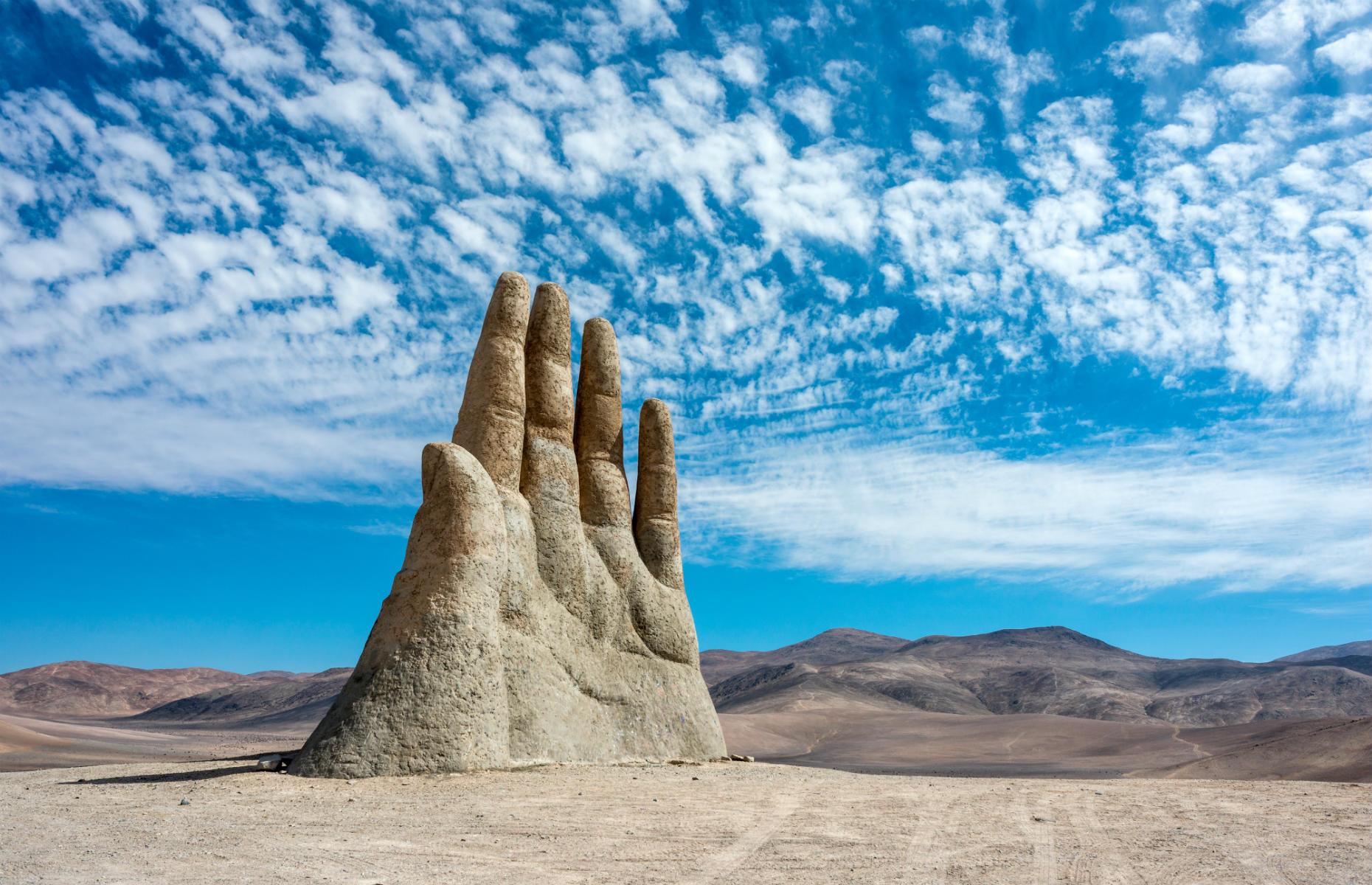 Wadi Shab, in Oman’s Al Sharqiyah Region, is very popular for its nature, swimming in the freshwater pools or to have a barbecue. The main attraction is the waterfall in the cave, reached after a short hike through this rugged landscape.

It’s not just historic ruins you’ll find in the world’s deserts. Anyone who’s seen the 2006 horror movie The Hills Have Eyes might recognize the stretch of desert outside the city of Ouarzazate in Morocco, which doubled for the US West Coast. The Gas Haven petrol station is where the family first hear of a shortcut through the desert from the store’s creepy clerk.

Gas Haven isn’t the only movie location in the area. It was actually the producers of Lawrence of Arabia (1962) who first saw the potential in the desert outside of Ouarzazate. They needed a location to stand in for Western Asia with consistent weather, and a remote position near the Sahara and Morocco’s wilderness fitted the bill. But it wasn’t until 1983 that these studios officially opened, providing sets for re-enactments of biblical locations, ancient civilizations and brilliant works of fiction alike.

The city features in George Lucas’ intergalactic saga Star Wars, most predominantly in the first of the prequels, 1999’s Star Wars: Episode I – The Phantom Menace. It stands in for the home planet of Anakin Skywalker, the young Jedi who grows up to become super-villain Darth Vader. Discover awesome abandoned movie sets here.

In 1970, Death Valley National Park purchased Scotty’s Castle which was being used as a guesthouse. Around 100,000 people visited the Mission and Spanish Colonial Revival-style villa each year, which is about a three-hour drive from Las Vegas. However the villa was damaged by severe flooding in 2015 and has not been open to the public since. Take a look at stunning images of the world’s abandoned castles here.

The town of Coober Pedy is located in Australia’s vast outback. Around 500 miles (805km) north of Adelaide and 430 miles (692km) south of Alice Springs, the two nearest major settlements, it’s as remote as it gets. The townspeople are renowned for living in underground residences, nicknamed dugouts, that allow them to escape the extreme heat and dust storms common in the Australian outback. It’s also known as the opal capital of the world, after the semi-precious stones were discovered here in 1915.

Since 1988, the Desert Cave Hotel has welcomed visitors to this unusual attraction and offers guests the opportunity to experience a night deep underground. Opal mining machinery was used to cut away the sandstone creating quiet, cool, dark and airy chambers in which the hotel was brought to life. The Desert Cave Hotel also has underground shops, a café, a bar and gaming room. Find more of Australia’s beautiful outback towns here.

A five-star luxury hotel and spa is the last thing you’d expect to find in the middle of the Sharjah desert but that’s where Al Faya Lodge is located. Formerly a clinic and grocery store, the two stone buildings that make up the hotel were originally built over half a century ago. It’s almost equidistant from Sharjah and Dubai on the desert peninsula which splits the Persian Gulf and the Gulf of Oman.

Over the road from the five-room boutique hotel, a new building houses a salt-water spa complete with an open-air swimming pool. Each bedroom has its own star-gazing skylight and there’s also a fire pit primed for recapping the day’s many adventures. Discover more of the world’s most remote hotels here.

The Qasr Al Sarab Desert Resort looks like something from a fantasy film. This sprawling beige fortress-like resort sits marooned in the middle of the Liwa desert. Inside, the resort is a verdant oasis of palm trees and swimming pools, a speck of green and blue within a sea of soft white sand dunes that disappear into the horizon.

Views don’t get much better than the one at Longitude 131°. The luxury desert basecamp sits in the shadow of Uluru (Ayers Rock), the massive sandstone monolith at the heart of Australia’s Northern Territories and World Heritage-listed wilderness. Here are 40 of Australia’s jaw-dropping natural wonders.

The Amangiri resort is a great example of a hotel which takes careful measures not to disturb its surroundings. That’s a good thing because this luxury resort is surrounded by some of North America’s most beautiful rock formations which have remained untouched for millions of years. Amangiri sits at the heart of the Grand Circle within easy reach of the Grand Canyon, Bryce Canyon, Zion National Park and Monument Valley.

Famed for its unique culture, cuisine and landscapes, Morocco is a stunning country. There’s capital Marrakech, surfer’s paradise Essaouira or the famous coastal town Casablanca, but lesser thought of are the country’s wild deserts.

Scarabeo Camp allows guests to stay in one of the world’s most inhospitable environments, with every home comfort they could wish for. Its unique glamping tents have African woven matting, Moroccan Berber rugs and atmospheric lanterns. It’s currently closed due to COVID-19; check out the website for updates.

Hidden deep in the Grand Canyon lies a paradise for those adventurous enough to look for it. The Havasupai Falls are a sight to behold, only reached after a grueling 10-mile (16km) hike in the baking sun. The water is enriched by underground minerals absorbed over thousands of years, turning it a striking turquoise green. For more wet ‘n’ wild action, discover amazing pictures of the world’s most impressive waterfalls here.

Kolmanskop was ultimately abandoned in 1956 and in fewer than 50 years, the town had lived, flourished and died. At the peak of its popularity the town bloomed with lush gardens, manicured lawns, rose beds and eucalyptus trees, and boasted a ballroom, skittle alley, theater, sports hall, casino and ice factory. Over the past six decades, the town has been reclaimed by the Namib desert and many of the homes are disappearing into the sand dunes. Take a look at more ruins where Mother Nature has run riot.

No, that’s not a mirage. It is in fact a Prada store in the middle of the Texan desert, along US Route 90. But sadly you won’t be able to stock up on designer goods here. Built in 2005, it’s an art installation by Berlin-based artists Elmgreen and Dragset, and it’s being left to decay into the landscape. The merchandise in the window is real but the bags are bottomless and all the shoes are right-footed. Discover more unusual things you’ll find on a road trip through the USA.

Desert Breath sits close to the Ras Ghareb-Hurghada Road which connects Cairo with southern Egypt. The artwork is gradually being reclaimed by nature and the artists have said they created this unusual installation to serve as an instrument to measure the passage of time.

The Atacama desert stretches around 60 miles (97m) along Chile’s Pacific Coast and is one of the driest places on Earth – the only true desert to receive less precipitation than the polar deserts. It’s where Chilean artist Mario Irarrázabal decided to build his towering sculpture Mano de Desierto, Hand of the Desert, in the early 1980s. Discover more of the world’s most jaw-dropping sculptures here.

The 36-foot-tall (11m) concrete hand is located around 50 miles (80km) southeast of the town of Antofagasta. “A good sculpture has primitive, magical strength,” says the artist of his world-famous work. Now take a look at gorgeous photos of the last unspoiled places on Earth.

The most beautiful historic place in every state

‘It would destroy it’: new international airport for Machu Picchu sparks outrage