Check out the best places to check in: The UK’s hotels and inns of the year – exclusively revealed by the Mail

A romantic island hotel reached by horse-drawn carriage, a stylish, half-timbered B&B and a restaurant-with-rooms serving great value food are among this year’s winners of the Good Hotel Guide’s César awards.

The 2021 Oscars of the hotel industry, as revealed exclusively by the Daily Mail, have been chosen by the guide’s editorial team based on readers’ reports and anonymous inspections.

Newcomer of the Year 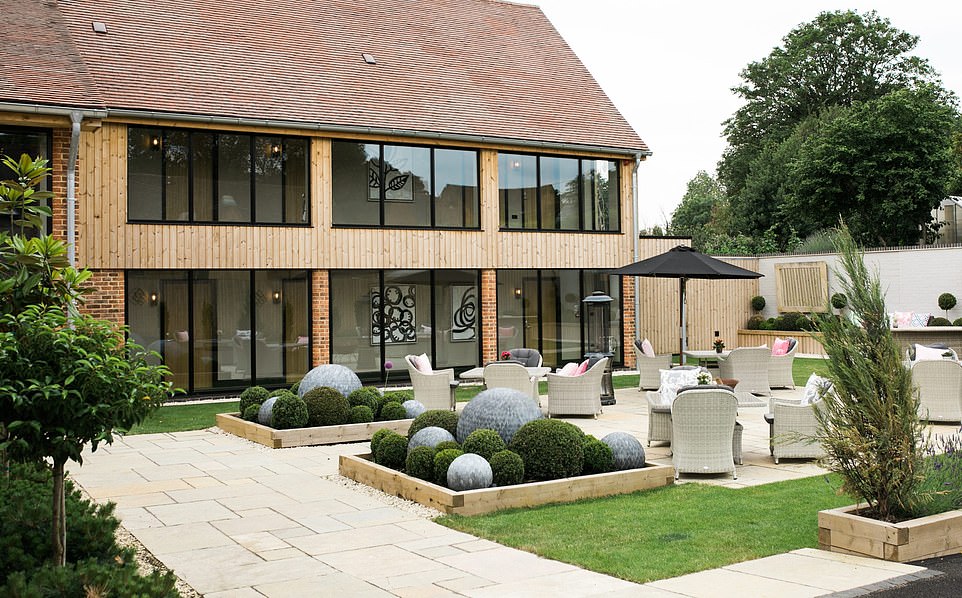 Baraset Barn, pictured, is a restaurant-with-rooms in Stratford-upon-Avon, which serves up delicious food and is good value 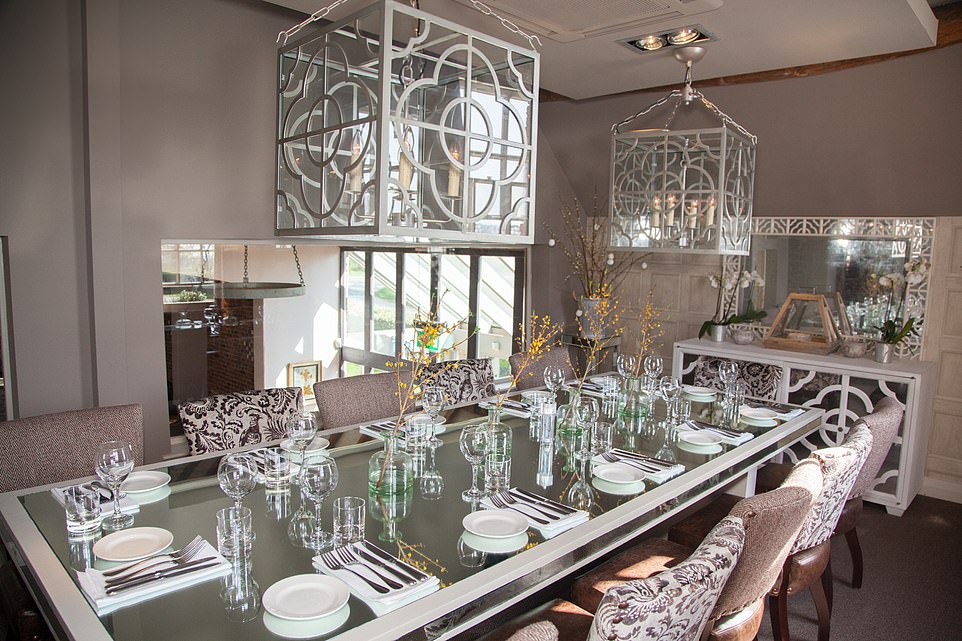 Part of the gastro group Lovely Pubs, it has 16 bedrooms looking on to a meadow. Those at the top have a balcony; those at the bottom a terrace.

Island Hotel of the Year 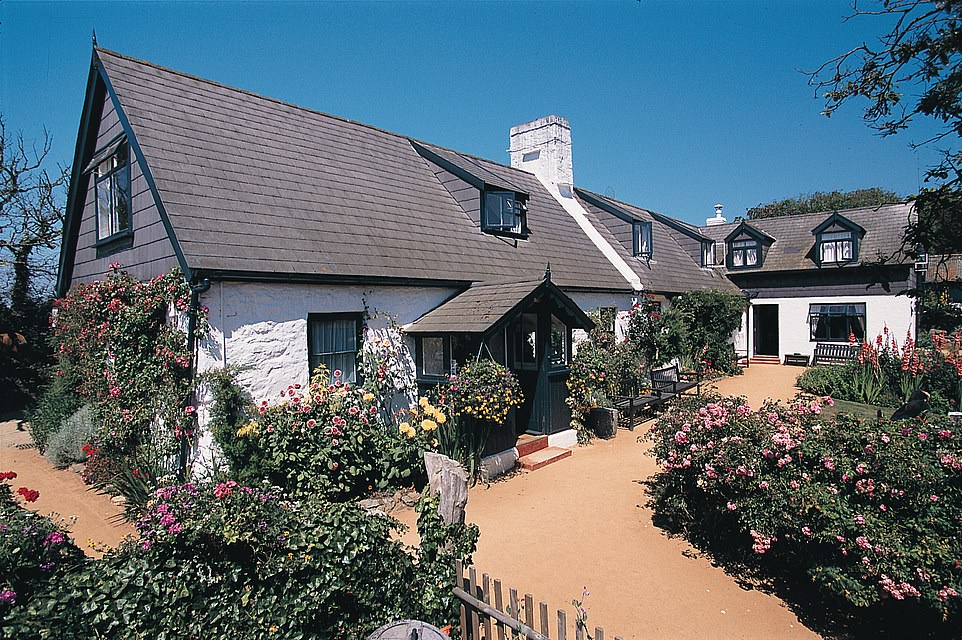 La Sablonnerie, pictured, is a 400-year-old farmhouse on the island of Sark. It has been run by the same family since 1948 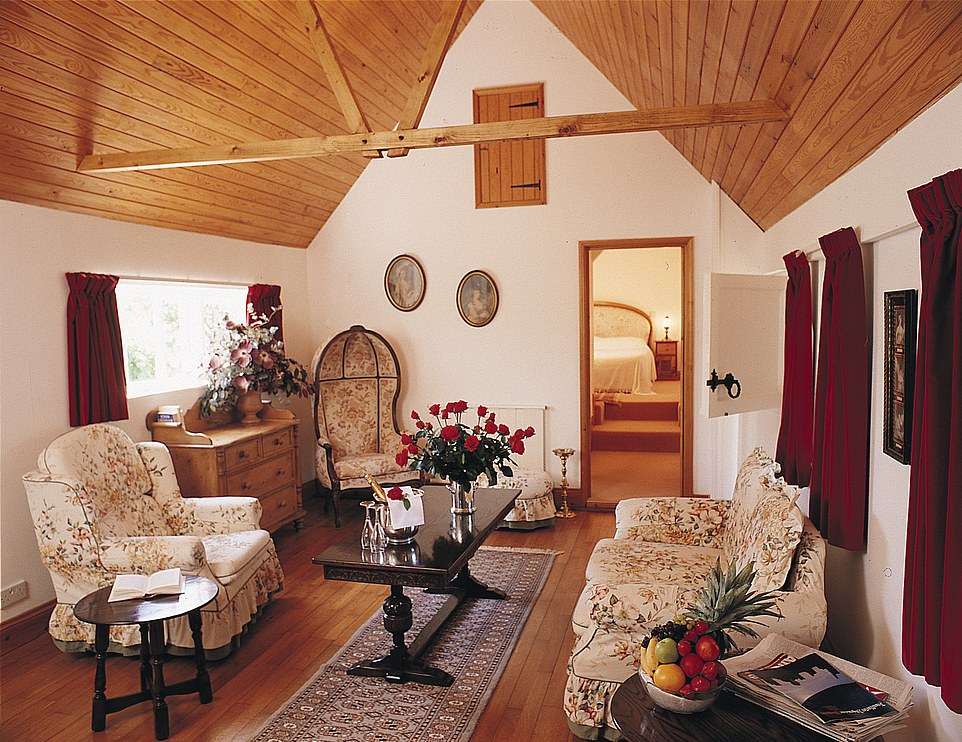 The best way to arrive at La Sablonnerie is by horse-drawn carriage. Its bedrooms have a ‘rustic simplicity’

Elizabeth Perrée’s 400-year-old farmhouse La Sablonnerie, on Sark, is as charming as its owner, whose family has run it since 1948. A horse-drawn carriage is the best way to arrive at this rose-smothered, whitewashed Channel Island hotel.

Take a dip in the turquoise waters of nearby Venus Pool — a naturally-formed swimming spot surrounded by towering granite cliffs — before returning to tuck into local lobster and scallops.

Bedrooms have a rustic simplicity. Past guests include Vivien Leigh and Laurence Olivier.

Don’t miss: The honey at breakfast made from local bees feeding on gorse. 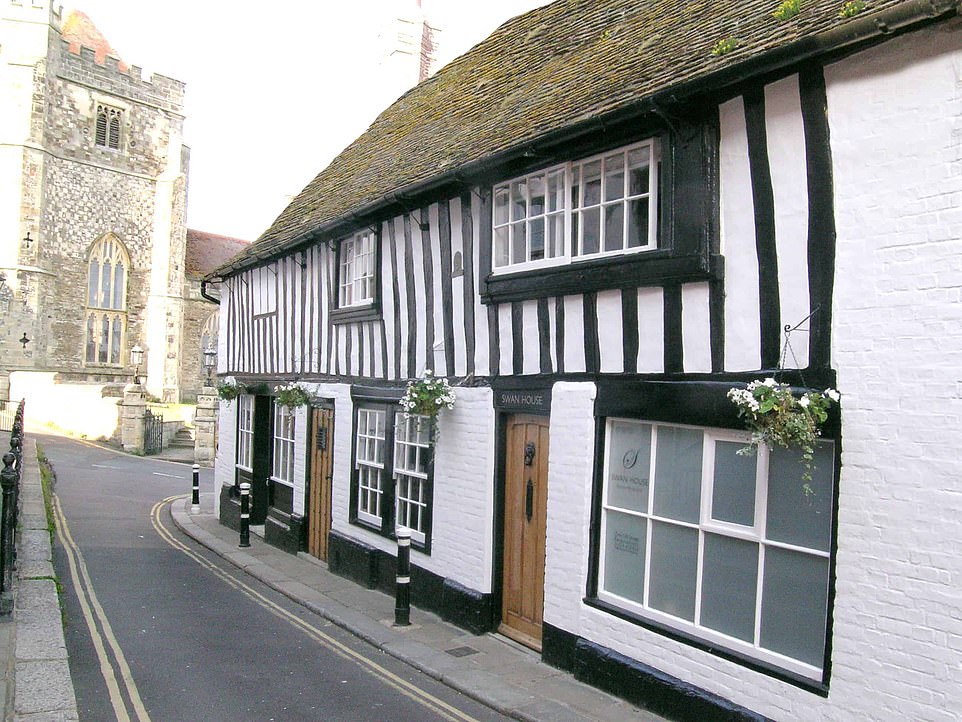 Swan House, pictured, is a Tudor, half-timbered B&B in Hastings, Sussex. It is run by Brendan McDonagh and his partner Lionel Copley 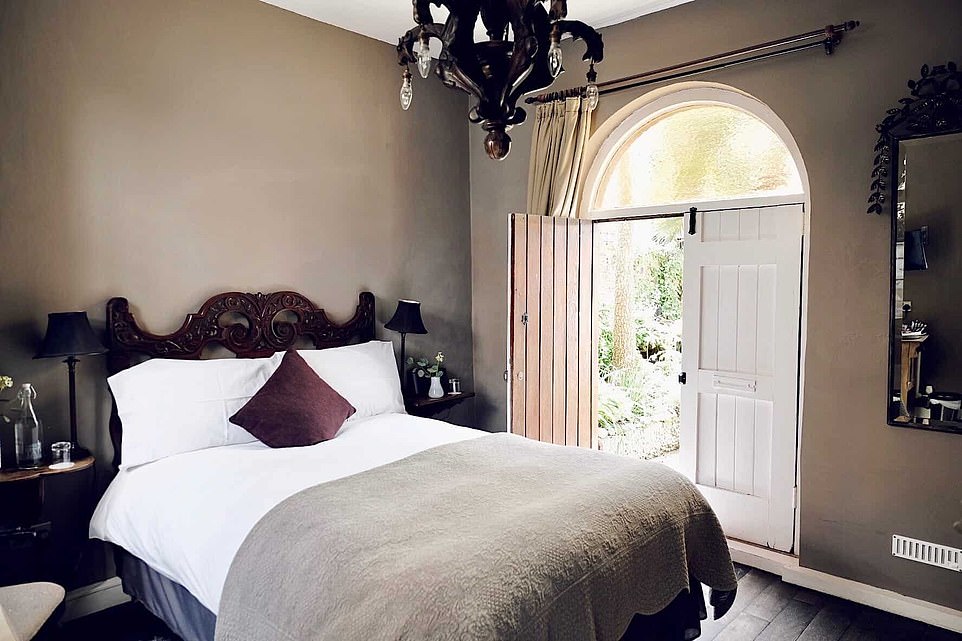 One of the bedrooms inside Swan House. It also boasts a courtyard garden at the rear of the property

The historic mixes with the hip at Swan House, a Tudor, half-timbered B&B in Hastings, Sussex, which has been given a stylish makeover.

Brendan McDonagh gets as much praise for his warm welcome and delicious breakfasts (smoked salmon, kippers, fresh orange juice) as his partner, Lionel Copley, does for his elegant bedrooms.

There is a courtyard garden in the rear, which is close to an ancient church.

Don’t miss: The fishermen’s huts on the Stade, and the modern art gallery nearby.

Inn of the Year 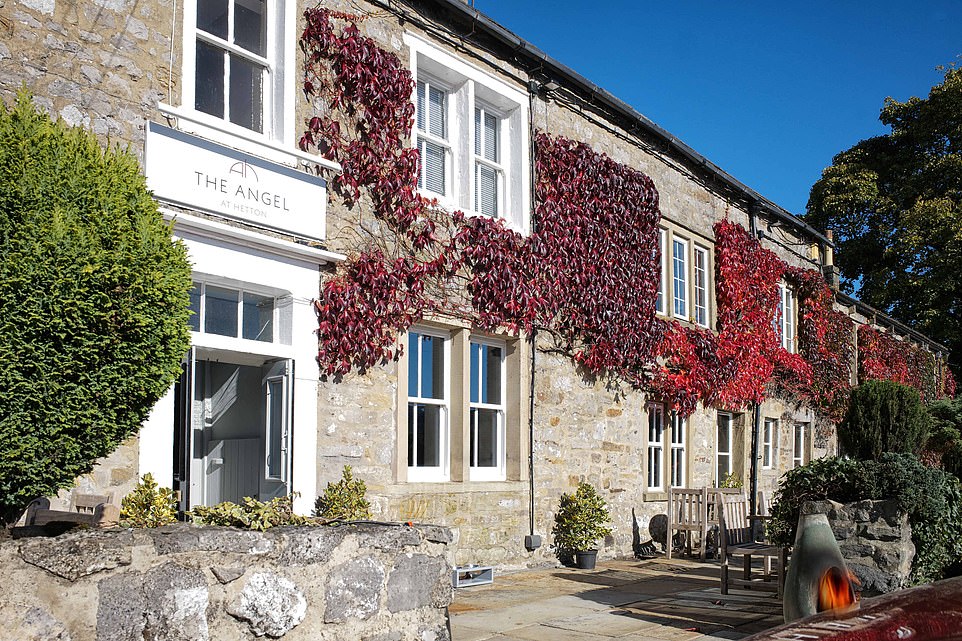 The Angel at Hetton in the Yorkshire Dales, which serves up Michelin-starred food and local ales 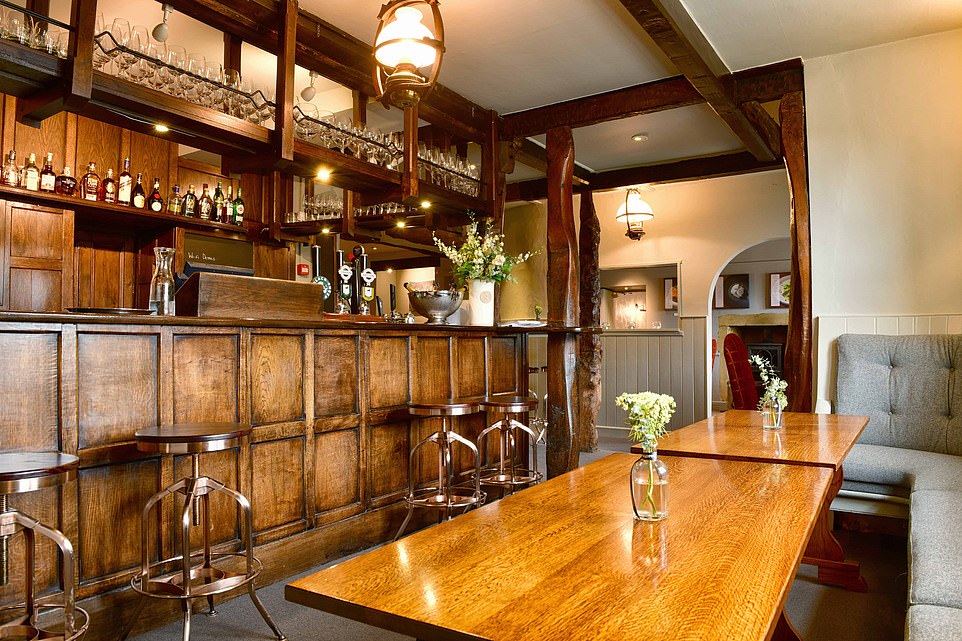 The Angel at Hetton in Yorkshire is where chef/patron Michael Wignall and his wife Johanna serve locally-sourced, but globally inspired dishes such as Yorkshire salt-aged duck with pumpkin.

Rustic bedrooms are in converted barns, some with a roll-top bath or a private patio.

Green Hotel of the Year 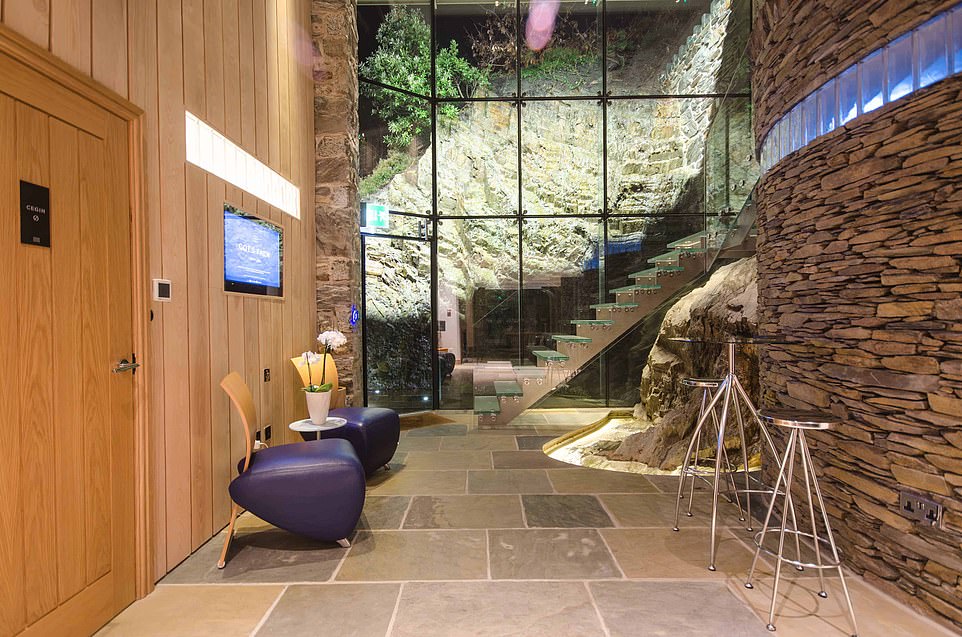 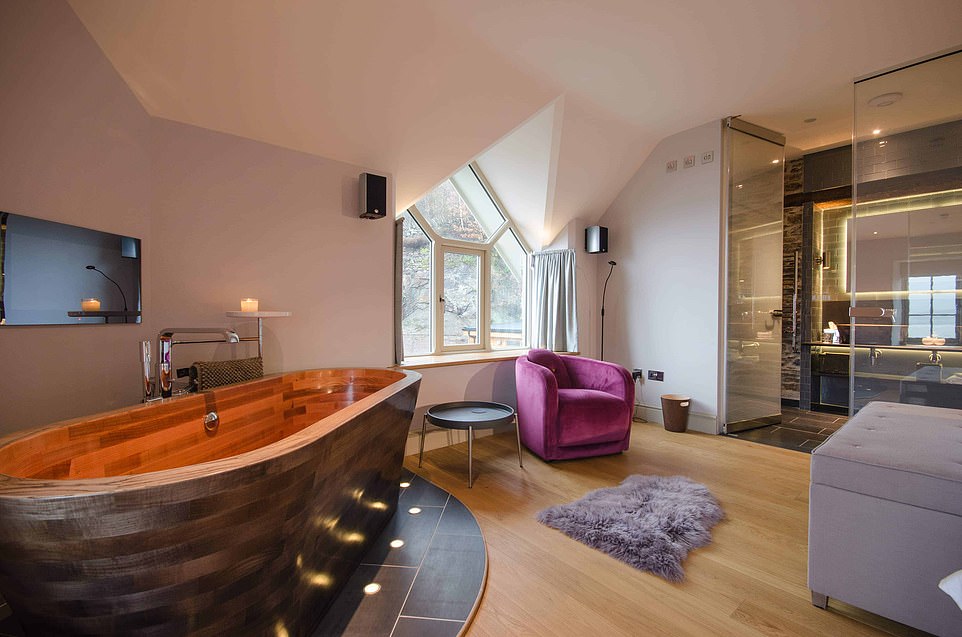 Each bedroom at Coes Faen has a special feature. One has a terrace with a hot tub, another is reached by a tunnel

In 30 acres of private woodland on the edge of Snowdonia, Sara and Richard Parry-Jones’s hotel, Coes Faen, in Barmouth, opens to a glass staircase built into the Gwynedd hillside.

It has both sustainability and style with biomass and solar water heating, estate log burning fires, stables for guests’ horses and sheep wool insulation.

Each bedroom has a special feature; one has a terrace with a hot tub, another is reached by a tunnel and has a cocktail bar.

Country House Hotel of the Year 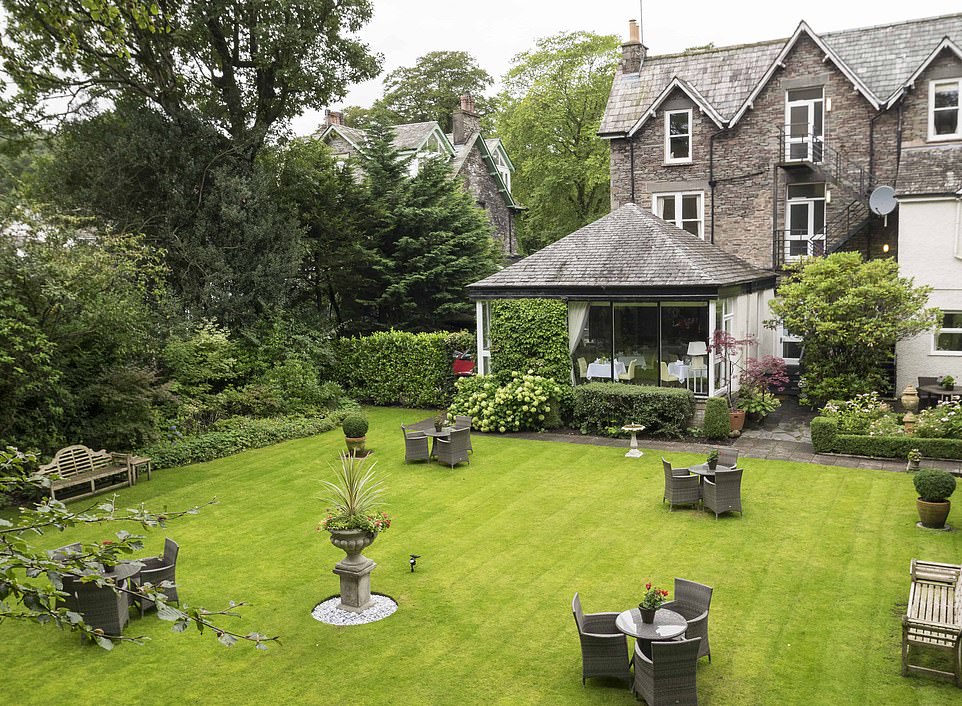 The Grasmere, in Broadgate, Cumbria, is a small Victorian country house hotel, which has sweeping views of Helm Crag 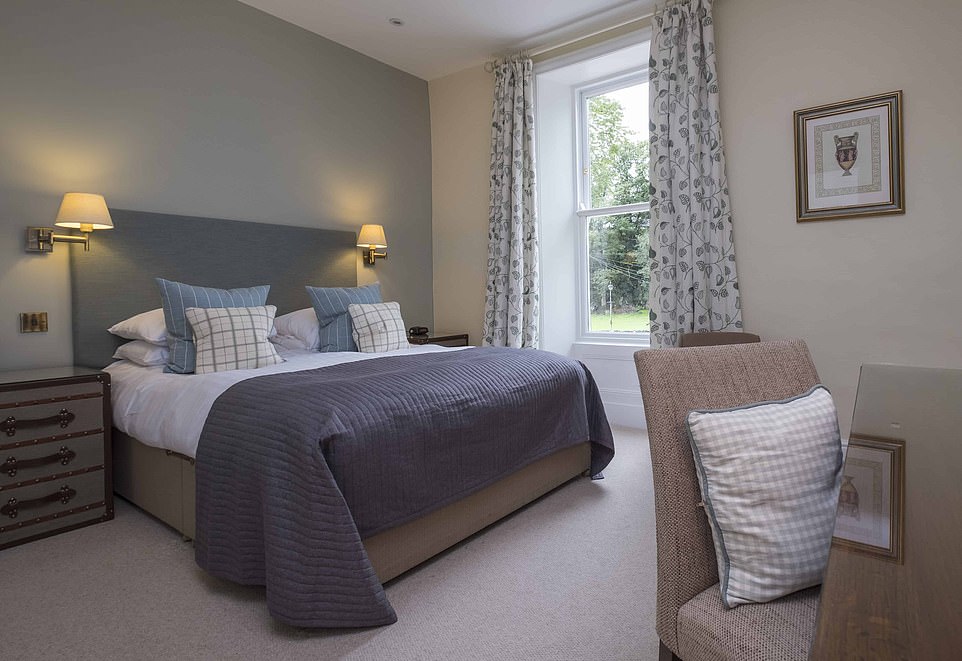 One of the rooms at The Grasmere. The 11 bedrooms at the hotel are each named after a Lake poet

Walks from the doorstep and sweeping views of Helm Crag make this small Victorian country house hotel — The Grasmere, in Broadgate, Cumbria — a winner.

Run in relaxed style by Kevin Winsland and his wife Nicki and their two daughters, the hotel has log fires, where you can nibble canapes before dinner.

The menu is imaginative with dishes such as oak-smoked wild Lakeland venison. Kippers, salmon and haddock are on offer at breakfast. The 11 bedrooms are each named after a Lake poet.

Don’t miss: The River Rothay, packed with trout, at the bottom of the garden.

Scottish Restaurant-with-Rooms of the Year 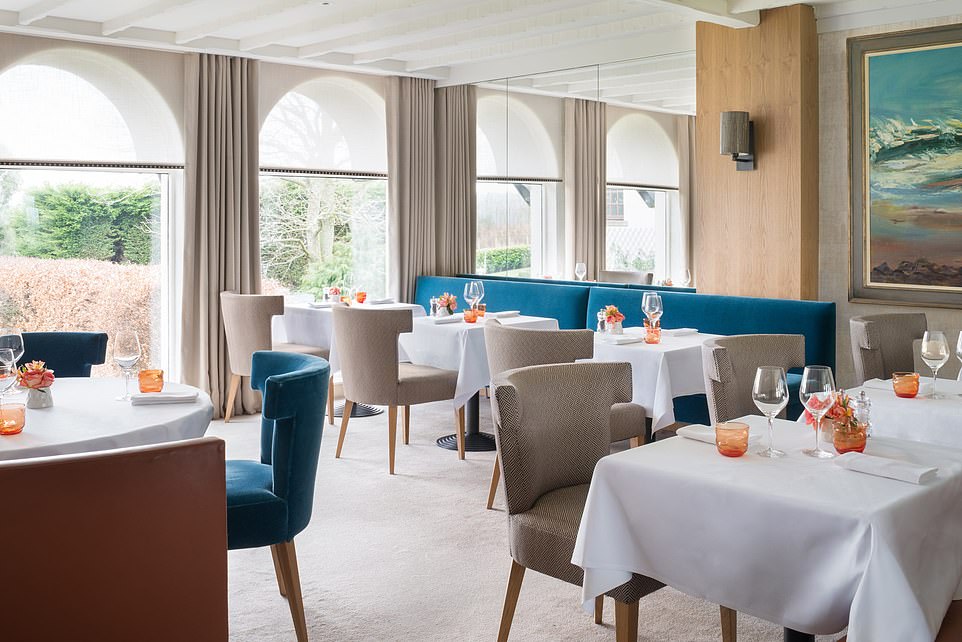 The Peat Inn, Cupar, is a former coaching inn in a Fife hamlet. Menus here range from three-course lunches to six-course tastings 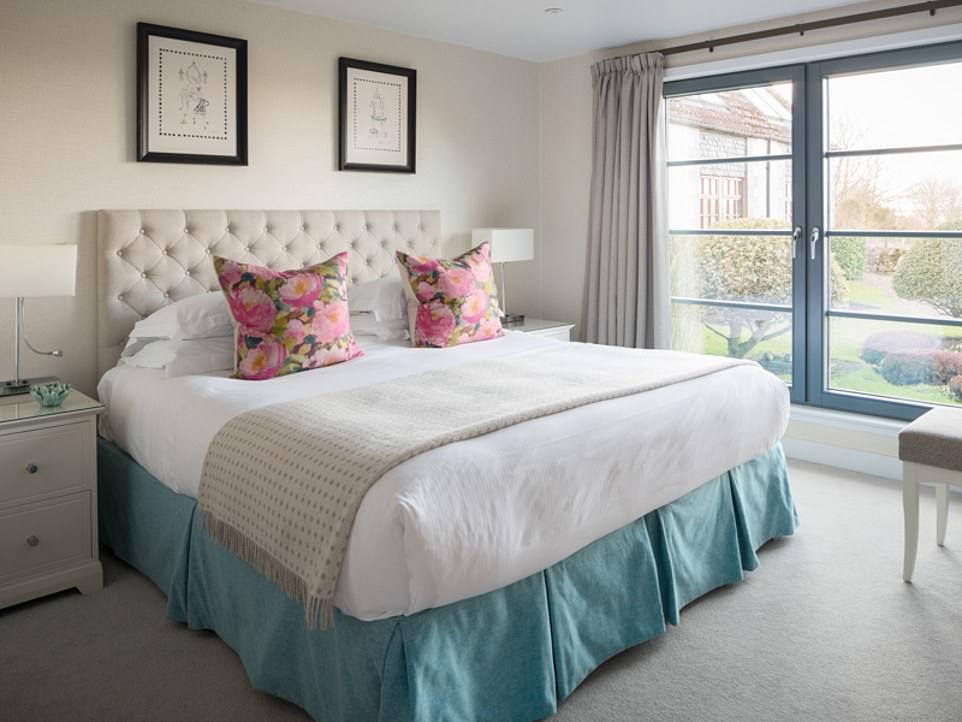 One of the rooms at The Peat Inn. It is close to St Andrews – the town with the world’s most celebrated golf course

The Peat Inn, Cupar, a former coaching inn in a Fife hamlet in the middle of nowhere, has gained a big reputation thanks to its Michelin-starred chef/patron Geoffrey Smeddle. He and his wife Katherine have created a comfortable retreat for food-lovers, with cosy rooms, a well-tended garden and impeccable service.

The menus range from three-course lunches to six-course tastings and include dishes such as pastrami of sea trout, loin of deer, or herb-roasted guinea fowl.

Seaside Hotel of the Year 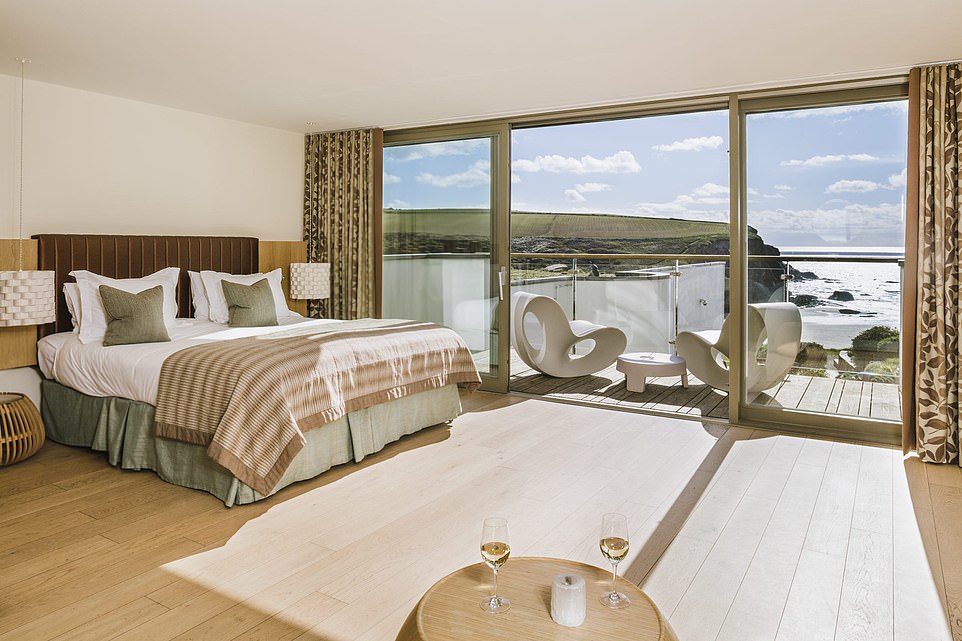 The Scarlet in Cornwall is a chic, adults-only hotel, which boasts ocean views, tranquillity and good food 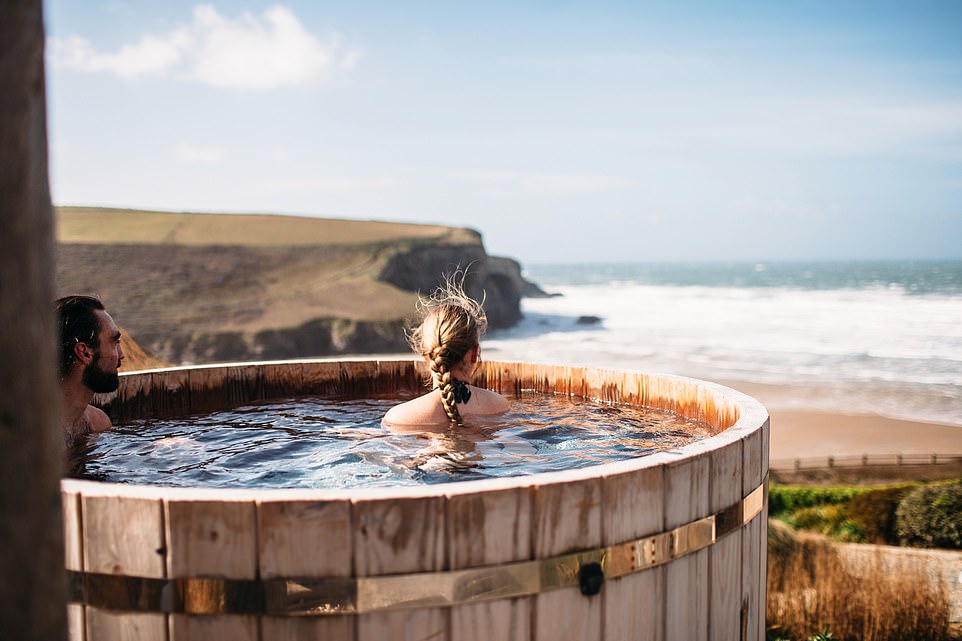 The Scarlet has an outdoor hot tub, an Ayurvedic-inspired spa and meadow gardens

This chic, adults-only, modern hotel is popular thanks to its winning combination of ocean views, tranquillity and good food.

Choose between dips in the Atlantic, an outdoor hot tub or the Ayurvedic-inspired spa, or relax in the hotel’s meadow gardens.

Some bedrooms at The Scarlet in Cornwall’s Mawgan Porth have a private garden, terrace or balcony with sea views.

Don’t miss: Catch some waves with the local surf school.

LOVE IS IN THE AIR

Romantic Hotel of the Year 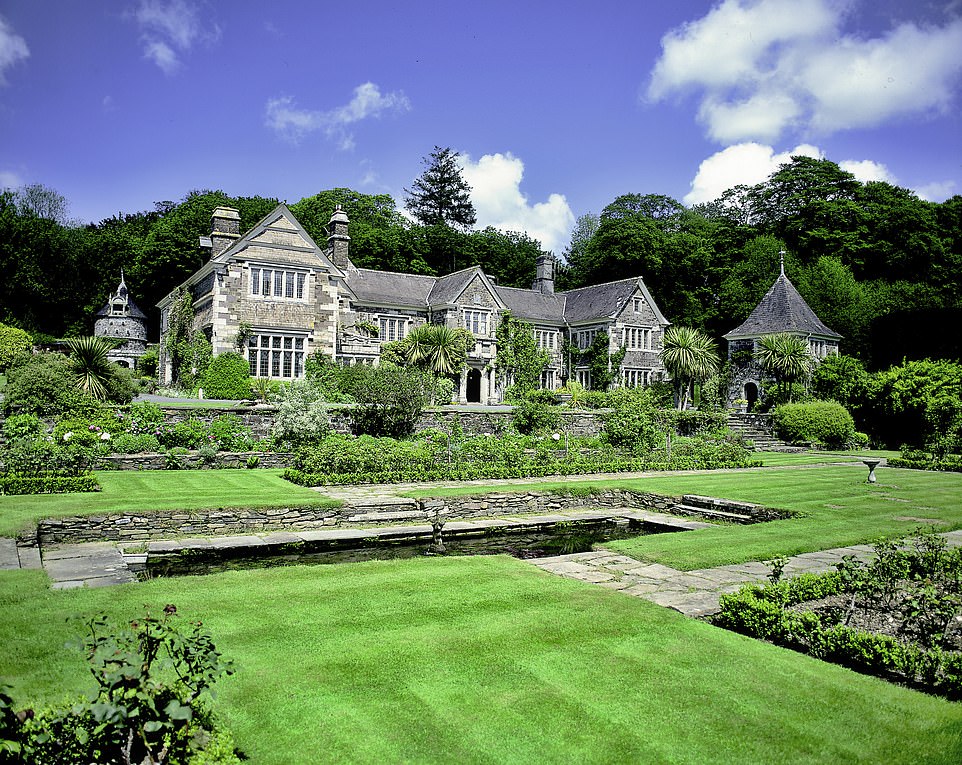 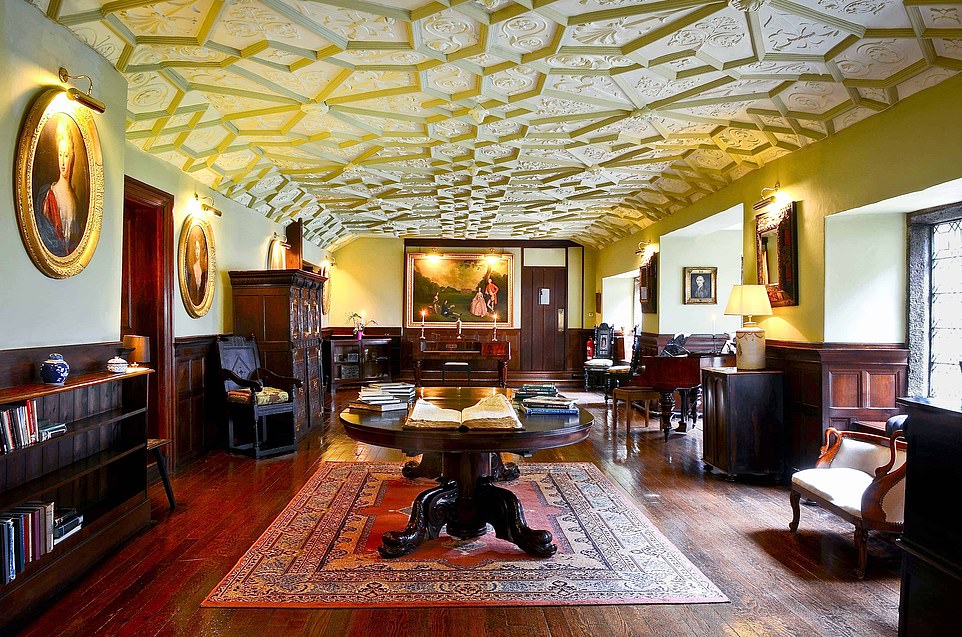 Inside Lewtrenchard Manor is Renaissance woodwork, ornate ceilings, a rococo fireplace and a gallery with two pianos

Lewtrenchard Manor in Lewdown, Devon, stands in gardens laid out by Walter Sarel and is a Jacobean-style manor house with Renaissance woodwork, ornate ceilings, rococo fireplace and a gallery with two pianos.

The Malvern Hills have one of the best views in England

How to visit one of America's coolest abandoned places