“A hurricane warning has been issued for the coast of Louisiana, where a State of Emergency has been declared.

“New Orleans, which has already experienced severe thunderstorms and flooding, is likely to be affected.

“You should monitor local weather updates from the National Weather Service and follow the advice of local authorities.”

The FCO has confirmed the advice still stands this morning, with more UK travellers set to head to the States this week.

Meanwhile, in more general advice, it added: “The Atlantic and Northern Pacific hurricane season normally runs from June to November and can affect US coastal regions, Hawaii, and Guam. 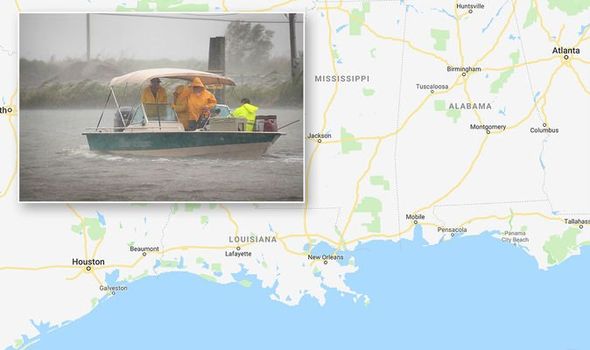 “The South Pacific tropical cyclone season normally runs from November to May and can affect American Samoa.

“You should monitor the progress of approaching storms on the US National Hurricane Centre website and follow instructions issued by the local authorities, including any evacuation orders.”

This weekend, American, JetBlue, Southwest, and United Airlines allowed those with flights that may be directly impacted to change their itineraries without a fee.

Yet this did not stop flight cancellations from occurring, with American forced to cancel some routes from numerous airports, including a host of flights from different firms at New Orleans airport.

They issued a Tweet promising “flexible travel options” for passengers.

Hurricane Barry reached its peak hurricane strength as it neared the USA state of Louisiana.

Warnings have now been issued suggesting Storm Barry could bring “dangerous, life-threatening flooding” with more than 20 inches of rainfall in the aftermath.

This comes despite the fact the storm has now weakened, to one of wind speeds of 60mph and a “tropical depression”.

Thousands of people have been evacuated from high-risk areas, while others have been warned to shelter in safe places.

The US Coast Guard has already rescued at least 12 people amid floodwaters in Louisiana.

Fall in love with ShuiQi Spa at Atlantis, the Palm