From paying for dinner to getting on the bus, there are more places than ever before that will accept cashless transactions. Since the coronavirus pandemic, much of the World has moved towards making cashless payments easier than ever.

In March 2021, the UK Financial Conduct Authority (FCA) confirmed changes to its rules, allowing for an increase in the single transaction contactless payment threshold from £45 to £100.

MasterCard witnessed an increase of 40 percent in contactless payments during the first quarter of 2020, while approximately 58 percent of people in the United States were found to be more likely to use contactless cards than they were before the pandemic started.

And, according to Retail Banking Research (RBR), there is the “highest average number of contactless purchases per card” in Europe, where “consumers are already choosing to use contactless cards for many low-value everyday purchases they would have previously made with cash”.

With this in mind, it can be tempting not to bother with the hassle of switching over your money to foreign currency. 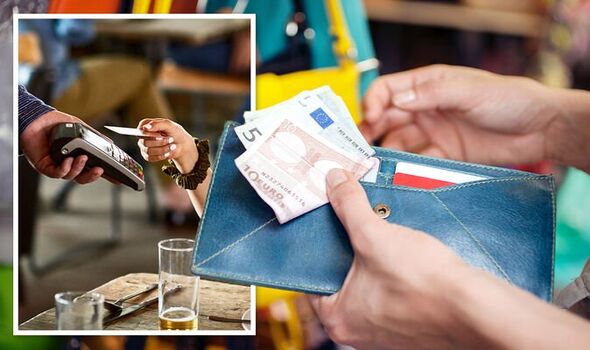 Despite this, according to Simon Phillips, managing director of travel money specialists No1 Currency: “Cash is still king”.

He told Express.co.uk: “For those of us who seldom use cash in the UK it can be tempting to think that everywhere is going cashless.

“But cash is still king in many countries. Outside western Europe, app-based and digital payment technologies are very much in their infancy.

“Even in popular European destinations like Spain, Italy, Germany and France, retailers and restaurants still handle far more transactions in cash than they do by card.”

Editor-in-Chief of travel money comparison site Quotegoat.com, Michael Foote, added: “How much foreign currency you’ll need to carry when you’re abroad will depend on where you’re going. Do your research online to find how cashless a country is.

He added: “As long as you have the right card, your money will go further when you use a card because you’ll get a better exchange rate and you don’t have to pay a commission for exchanging your cash.

“If, however, you’re travelling to a country that still relies heavily on cash the benefits are you won’t get stuck not being able to pay for things when you realise it’s cash only at many restaurants and shops.”

DON’T MISS
Britons in Spain could be slapped with £645 fine under new rules [INSIGHT]
Britain’s favourite destinations named [FULL LIST]
Cruise hacks: Can I bring my own alcohol? How to get free drinks [EXPLAINER]

Even if a country is mostly cashless, it is also important to consider times when you might only be able to use physical currency.

Mr Foote told Express.co.uk: “Even if you’re going to a country that does widely accept cards as payment, you might need a bit of cash for things like vending machines, lockers, parking meters, tipping, shopping trolleys, buskers, beach vendors and market stalls, just like you still do in the UK.”

You may be charged for last-minute cash withdrawals

Challenger banks like Monzo and Starling are leading the way when it comes to allowing customers the freedom to use their cards outside of the UK, including for some withdrawals.

But this isn’t the case with every bank card. Mr Foote explained: “If you withdraw cash from an ATM while you’re abroad, you’ll likely have to pay a cash withdrawal fee if you use your debit card or a credit card.

“It’s always best to check with your bank or lender before withdrawing cash abroad because the vast majority will charge a fee.”

Stick to a budget

Tapping your bank card can make things all too easy to spend and lose track of your budget.

But if you’re looking for a holiday that doesn’t break the bank, then cash could end up being your best friend.

Mr Phillips said: “Having a reserve of cash can also make it easier to budget while you’re away.

“With many of us wary of what we’re spending at present, taking cash allows you to watch every penny, euro and cent.”

Though cash can be easily stolen, it’s also important to consider credit card security while travelling.

Mr Phillips said: “Another big reason to use cash abroad is to avoid falling victim to credit card fraud.

“Around £200 million is stolen each year from UK-issued credit cards, so think twice about where you use yours.”

For maximum security, the travel money expert recommends having a few different payment methods for your trip.

He said: “Having local currency offers great peace of mind; you can be certain that cash will be accepted, and there’s no chance of a nasty surprise when your restaurant bill comes and the waiter tells you they only accept cash.”

Which bank cards can I use abroad for free?

Not all bank cards are made equal, and many traditional banks actually charge customers a fee for using their credit or debit cards overseas.

In some cases, your bank may even suspend transactions if it detects an unexpected change in country.

Mr Foote said: “If you don’t tell your bank you’re going abroad and attempt to use your debit card, the bank may decline the transaction because it may seem suspicious, so it’s always worth informing your bank if you’re planning on using your card overseas.”

There are several new, challenger banks that do allow overseas spending, as well as banks that offer this as a perk of certain cards.

The key is to do your research before tapping your card overseas.

Mr Foote recommends using a travel credit card, which “won’t charge you a fee for using” it abroad.

He added: “They also offer near-perfect exchange rates when paying in the local currency, making them one of the best credit cards to use abroad.

“Travel credit cards come with Section 75 protection, meaning any purchases over £100 are protected if anything goes wrong.

“The majority of travel credit cards don’t have cash withdrawal fees either, saving you money if you need to get money out at an ATM.

“A word of warning though – withdrawing cash on any type of credit card can negatively impact your credit score so it’s best to avoid doing it.”

5 reasons to celebrate Christmas in Edinburgh