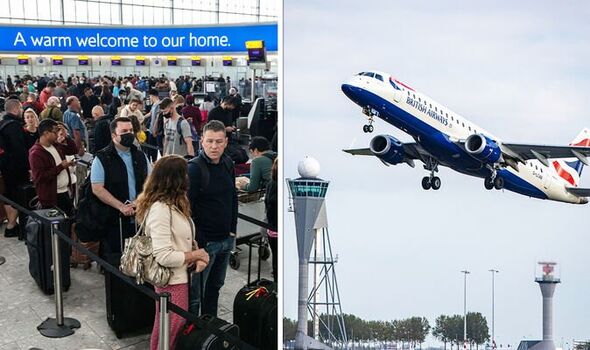 The ballot is not for direct industrial action but a consultation to ask airport workers if they would be willing to take action in the near future.

Unions GMB and Unite said a date for a strike ballot will be confirmed in the next few days.

At the time of writing, there is no indication that cabin crew have voted in favour of holding it.

GMB National Officer, Nadine Houghton, explained: “BA forced our members into pay cuts during the pandemic, when they had little workplace power to fight back.

“Now our members are back at work and staff shortages are hammering the company.

“It is their time to claim back what is theirs.

“These loyal workers have stood by BA through thick and thin, they have kept passengers moving when staff shortages and IT failures nearly brought the operation to a standstill.”

Nadine added that workers have “received shocking abuse from passengers”.

“If BA wants to avoid industrial action that will trash many people’s summer holidays, they need to do what’s right by check-in staff,” she said.

Sharon Graham, Unite General Secretary, said union members have been “left with no choice but to vote for strike action this summer”.

A BA spokesman commented: “While this is not a strike ballot, it is a disappointing response from this small group, considering our genuine offer of a 10 percent reward this year ahead of planned pay talks.

“Our colleagues are the heart of our business and we are continuing to talk with their union representatives .”

Unite general secretary, Sharon Graham, added: “This is about paying the rate for the job.

“BA has had every opportunity to resolve this dispute through negotiations but it has failed to do so.

“Our members are left with no choice but to vote for strike action this summer.

“Unite will be giving its members its unequivocal support until this dispute is resolved.”

The strike ballot date will be confirmed in a few days.

If the strike goes ahead, passengers could see hundreds of cancellations and delays which would hugely affect Britons’ holidays this summer when departing from Heathrow.

Dubai to London: who will be king of the skies?

Japan has never been hotter than it is right now