Historic fairy-tale tower once used as Ronnie Wood’s love nest is available to rent for £6,000 a month

A historic tower home that has hosted royalty, politicians and rock stars has become available to rent for almost £6,000 a month.

Ruxley Tower in Claygate, Surrey, was originally built by Henry Foley, the fifth Baron Foley, in 1870 for his wife, Evelyne. Queen Victoria is said to have once taken tea in the drawing room.

In 2009 the quirky eight-storey property was rented out to Rolling Stones guitarist Ronnie Wood for two years after his split from wife Jo. The rock star, then in his mid-60s, lived there with his 21-year-old Russian girlfriend Ekaterina Ivanova during their tumultuous 18-month affair. 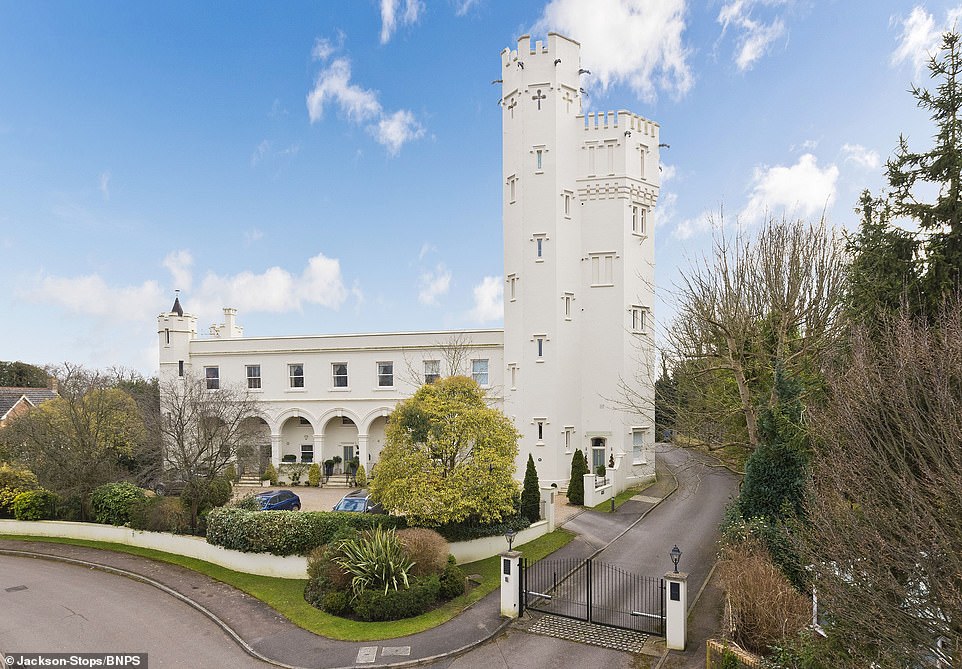 Ruxley Tower in Claygate, Surrey, was originally built by Henry Foley, the fifth Baron Foley, in 1870 for his wife, Evelyne 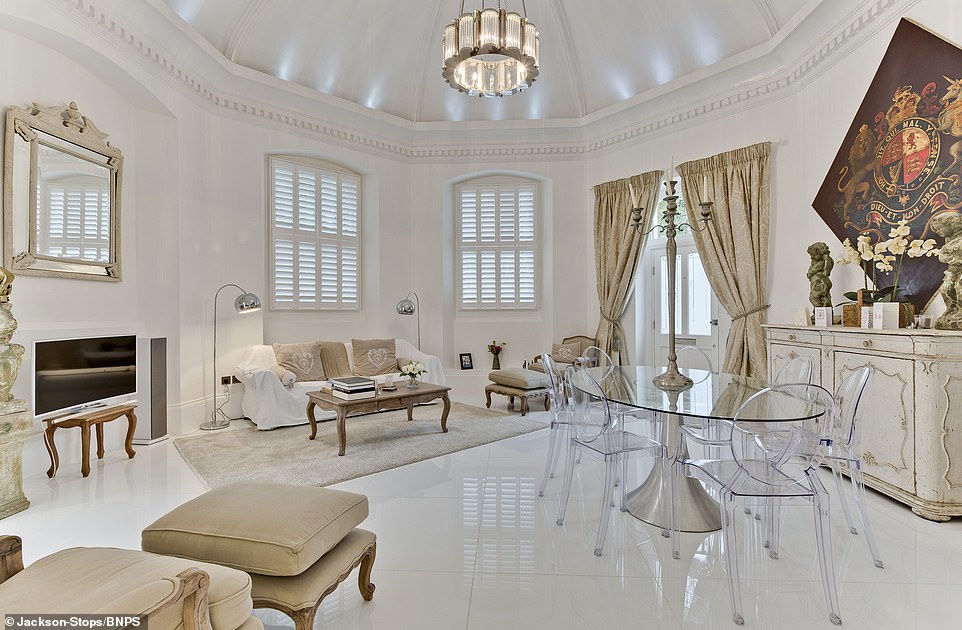 The property is available to rent fully furnished if the new tenants so desire. Pictured is the dining room, with a quirky painting hung diagonally on the wall 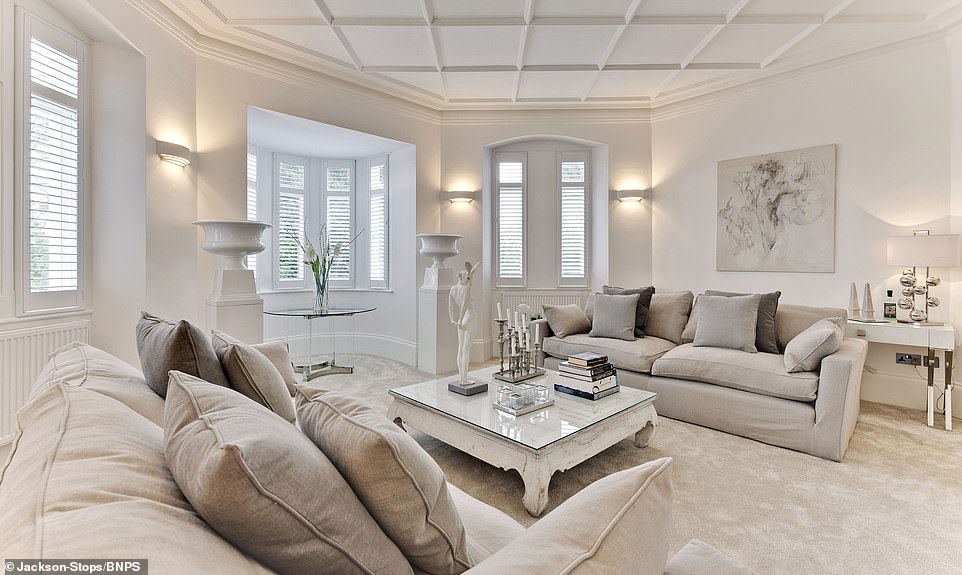 Queen Victoria is said to have once taken tea in the drawing room, which is now decorated in creams and beige 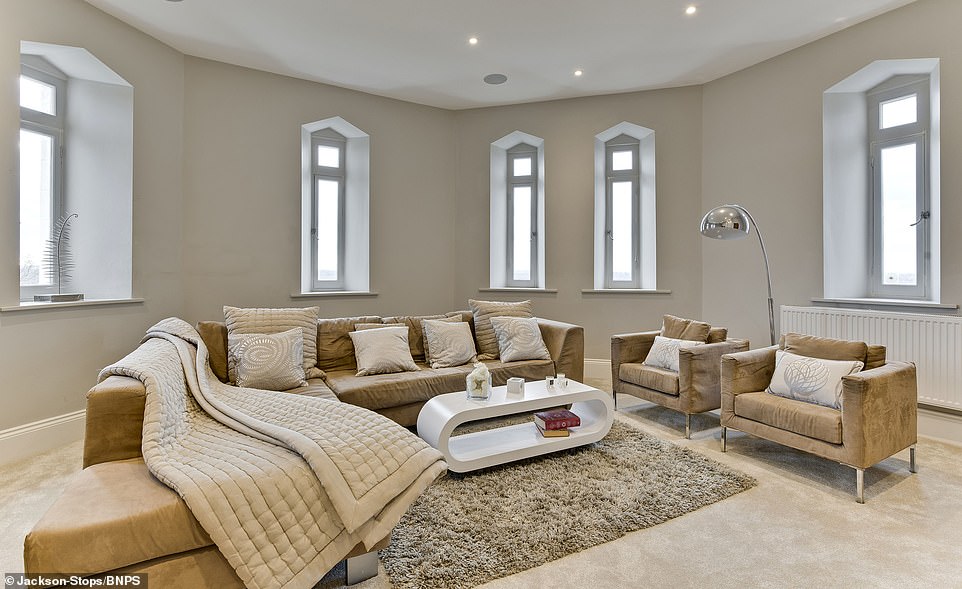 Being overlooked isn’t a problem in the tower, which is 80ft tall and commands terrific views

The 80ft fairy-tale tower, which has five octagonal bedrooms, has had several tenants since and is now available to rent again through agents Jackson-Stops.

The new tenant will enjoy double-height ceilings in the entrance hall and a dining room leading on to a fully fitted kitchen.

Up one floor there is a separate utility room and built-in storage. 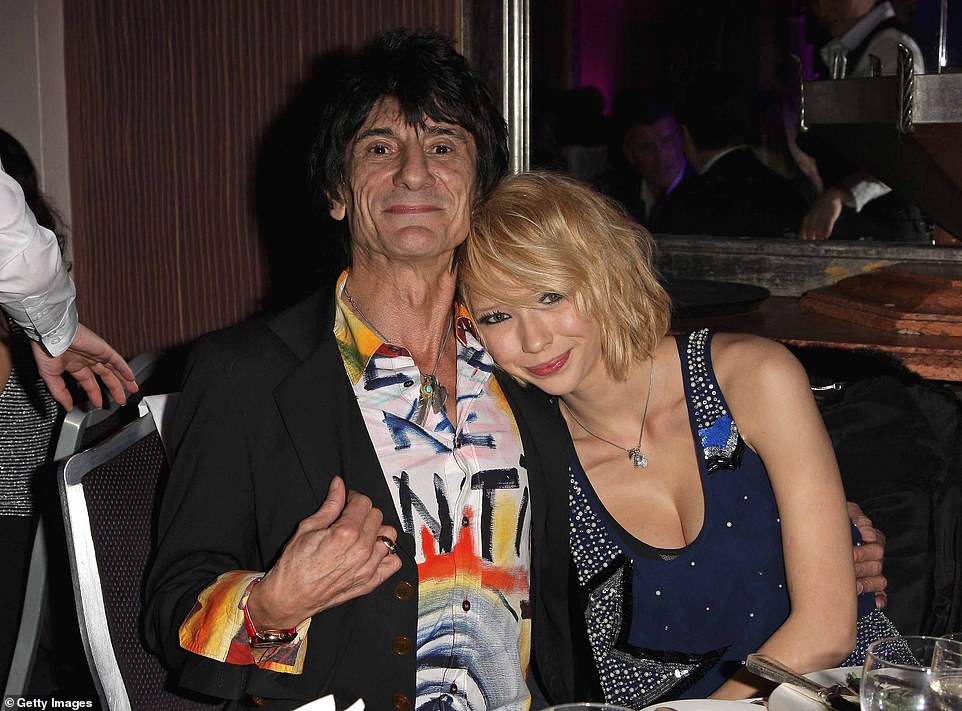 Ronnie Wood pictured here with Ekaterina Ivanova in 2009 in London 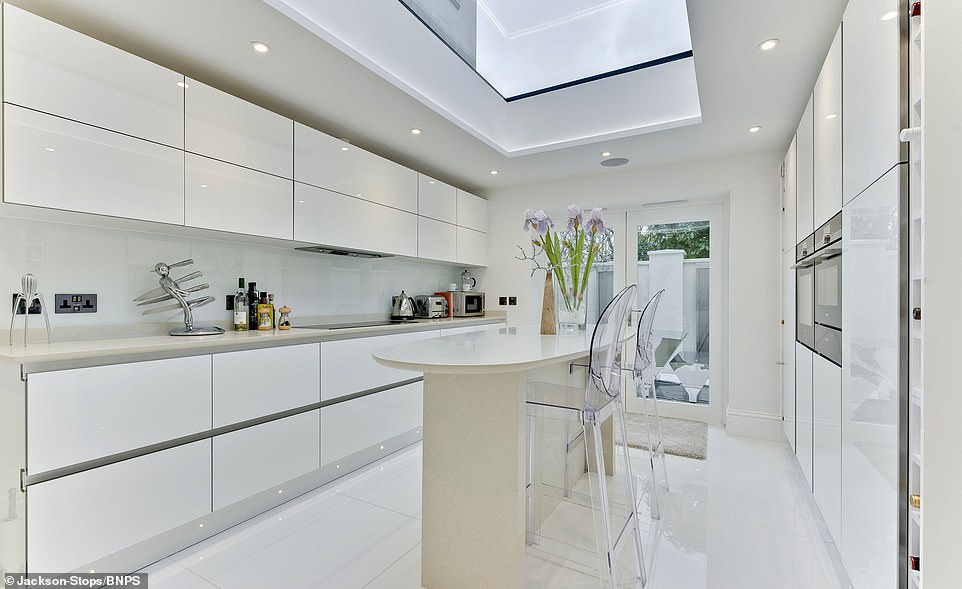 The modern kitchen, which features a breakfast bar, is all shiny white surfaces. It leads out to a terrace 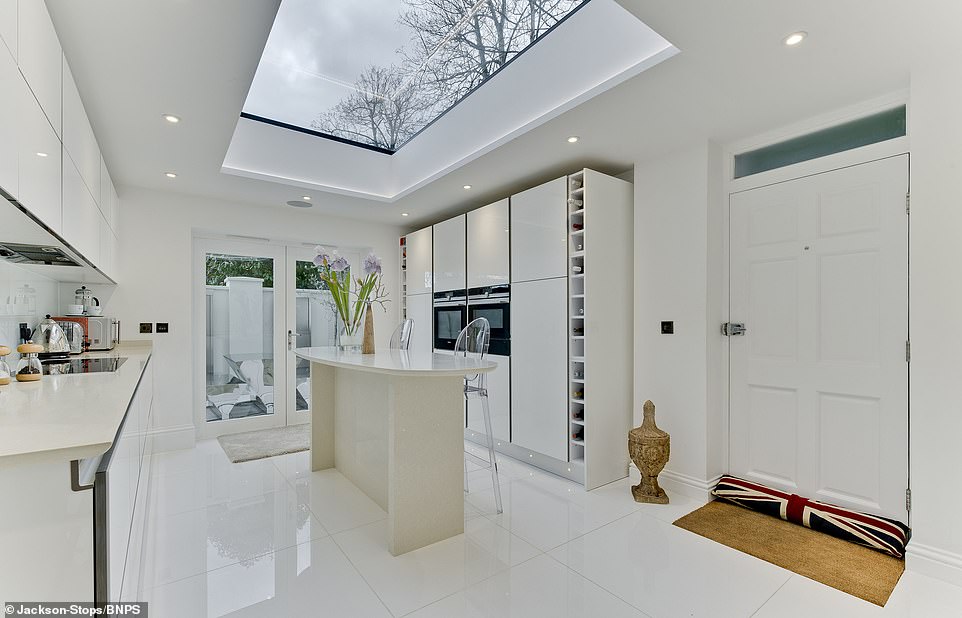 Despite its many floors, the property is fine for a family because of its practical kitchen and lift

The second floor comprises a family reception room, a study with a private balcony and a lift that provides access to the upper floors.

Two double bedrooms and a family bathroom are located on the third floor,  with the master suite on the fourth floor. This has built-in storage and an en-suite bathroom.

Further stairs lead to the fifth and sixth floors, which both have a double bedroom and en-suite. 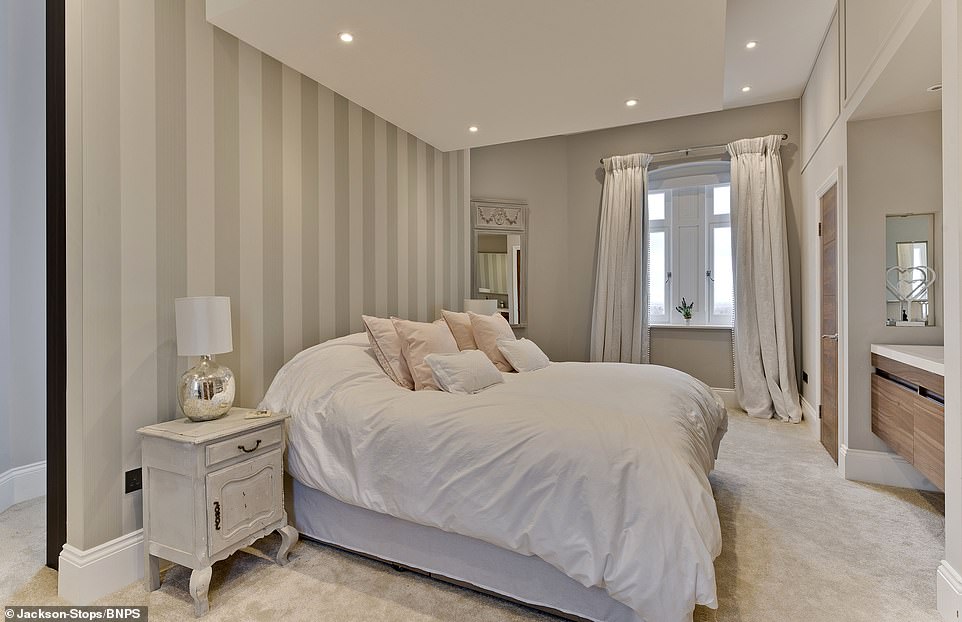 Two double bedrooms and a family bathroom are found on the third floor with the master suite on the fourth floor. This has built-in storage and an en-suite bathroom

There are two further terraces and a bar on the upper floors. The bar kicks out onto the main terrace and there is an additional terrace at the top.

In addition to its private entrance, the tower also has a wealth of period features including gargoyles, battlements and a jaw-dropping staircase.

Claudia Thorpe, a lettings manager at Jackson-Stops, said its current owner chose the décor and furnishings, which could be left in the property if the new tenants so desire. 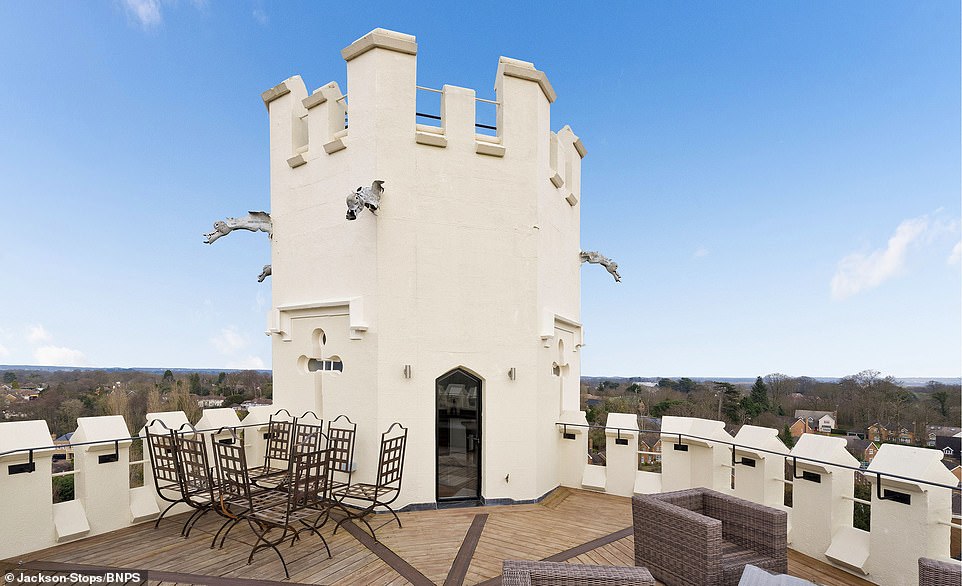 Claudia Thorpe, a lettings manager at Jackson-Stops, said: ‘It is an amazing home with panoramic views over the Surrey countryside and towards London’ 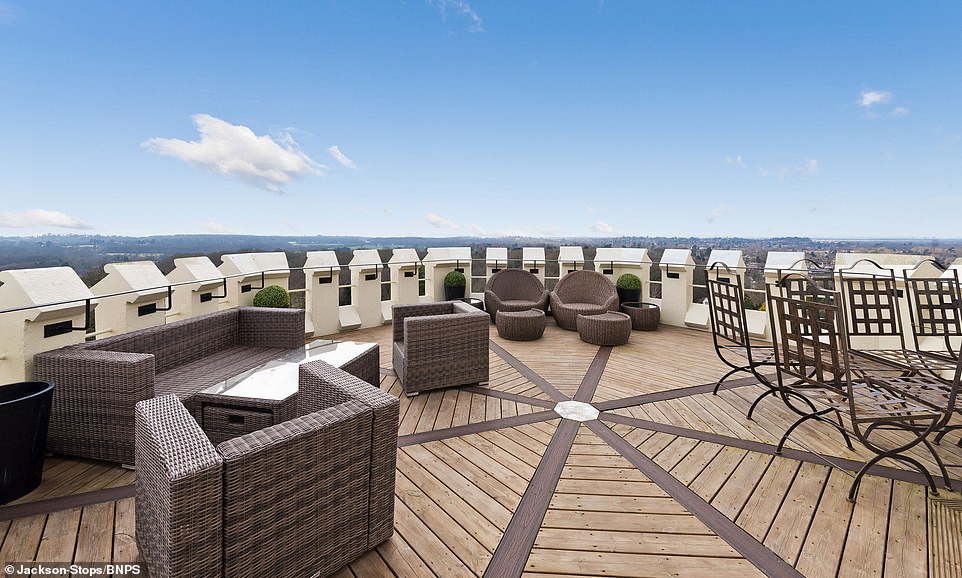 The lettings agent added that ‘almost any type of tenant would enjoy this home because it’s so unusual. It’s in a rural area but it’s easy to get to London and the road it’s down is super-private and gated’

She said: ‘It is an amazing home with panoramic views over the Surrey countryside and towards London.

‘The current owner has decorated it so well and the new tenant will have the option to take out all the existing furniture and artwork, or keep it there.

‘The only thing that ever gets removed is an old suit of armour.’

She said that people rent Ruxley Towers for many reasons.

She added: ‘We’ve had people renting it in the past who have sold their property and lived there while a new one was built.

‘Other tenants wanted to move to Surrey to be nearer their family but decided to rent for a year to see if they liked the area.

‘I think that others may rent it because it’s so different, they just want to have a fun few months in a totally unique place.’ 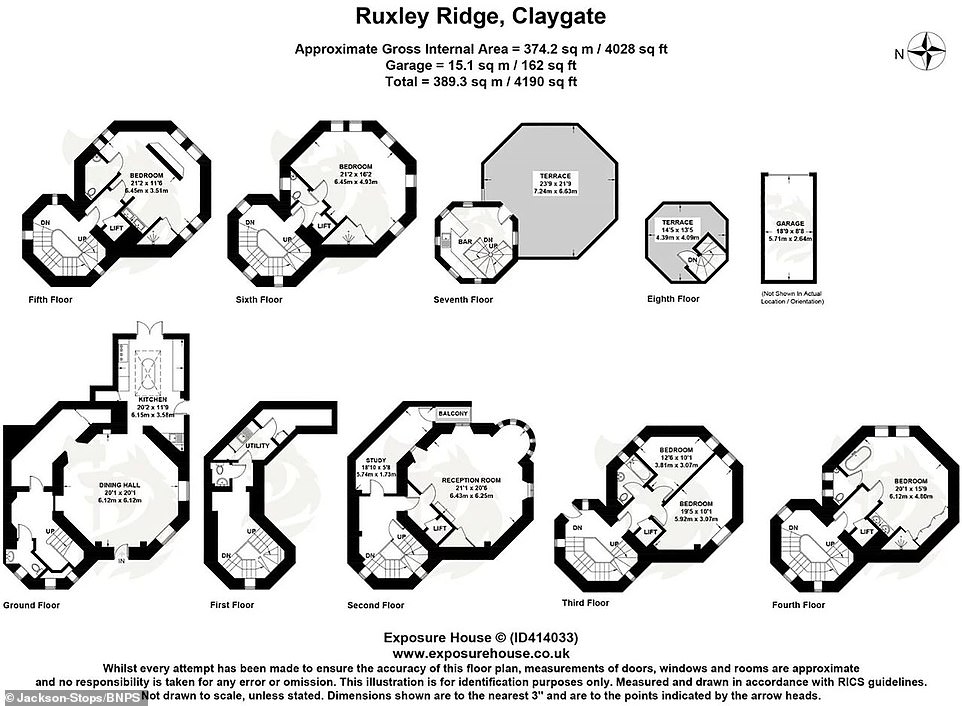 A floor plan of the eight-storey tower property, available to rent through Jackson-Stops

The U.S. Is Experiencing Blizzards on the West Coast and Spring Temperatures on the East Coast

Park Inn By Radisson to open in Bacolod ·