Home » Travel » This sporty Sardinian resort packs in the action

A family break that’s top of the league: Whether it’s footie, synchronised swimming, fencing – or just a week horizontal in the sun – this sporty Sardinian resort packs in the action

The low point comes at precisely 8.30am, as the sun streams through our curtains, the sound of the waves arriving gently on the Sardinian shore, and the pianist at what must surely be the world’s most extensive al fresco breakfast buffet takes up his station three floors below.

He is talented and enthusiastic and tinkles, pretty much non-stop, for the next two-and-half hours.

‘I don’t think I’m going to make it through the week,’ groans my husband Miles, head buried deep in his very soft feather pillow. ‘What sort of holiday resort has a breakfast pianist, for God’s sake?’ 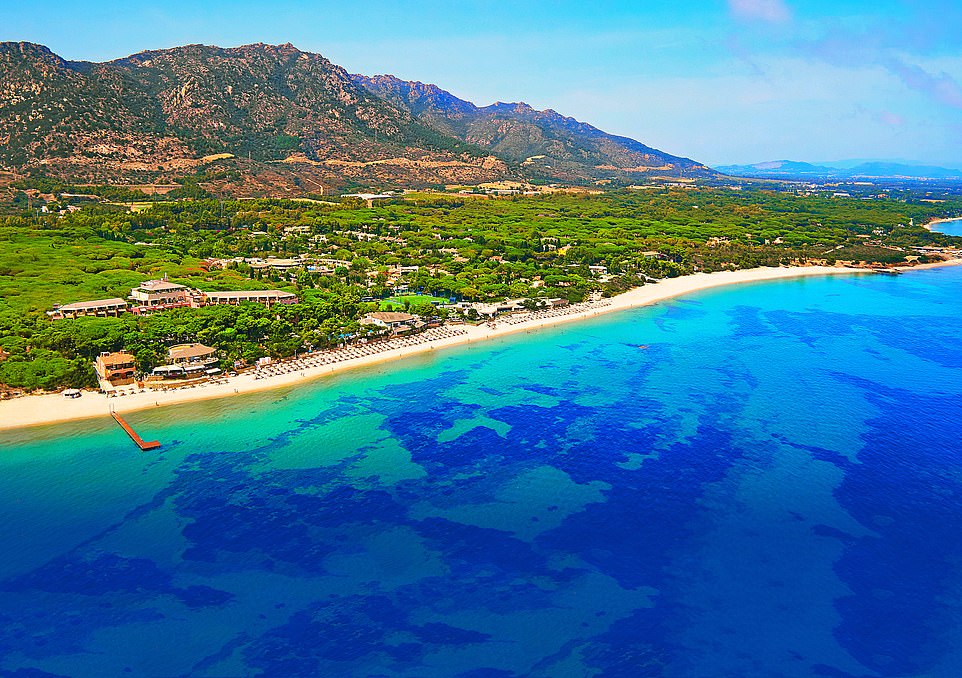 Forte Village in Sardinia has everything else you could possibly want — every amenity, every culinary need, every activity, writes Jane

It is the resort that has everything you could possibly want — every amenity, every culinary need, every activity. (And a few you don’t — a chair for your designer handbag during dinner? No, thank you.)

So if you fancy learning a new sport — joining the dive school, or any of the tennis, rugby, fencing or synchronised swimming academies, the magic school or spending a day in Bike World where Aldo the resident coach can teach even the most recalcitrant child (including one of mine) to ride in just two lessons — then this is your place.

For our sons, Freddy, seven, and Sandy, six, it is straight to the Chelsea Football Academy for two-and-half hours of training each day, in top-to-toe Chelsea kit, under the supervision of coaches from Chelsea FC. (Every academy has top trainers. The rugby academy had Austin Healey and Will Greenwood during our week.)

Despite being lifelong Liverpool supporters, they love it. How quickly they learn the Chelsea songs. How fickle kids can be. And how happy they are.

Miles and I, meanwhile, try to get our bearings. The resort is vast — 47 hectares with nine hotels (five of which are five star), countless pools, 21 restaurants, including regular pop-ups with Michelin-starred chefs and 13 villas. Some are bijou, others are vast with their own pools.

But somehow — perhaps because it is all so astonishingly verdant and ingeniously landscaped, it seems to gobble up guests.

Which initially seems a good thing because, at first glance, everyone apart from us appears to be rich, flashy and festooned in expensive logos — Chanel beach bags, Gucci flip-flops, Louis Vuitton handbags — and the odd dollop of silicone.

In the summer, when big stars such as Nile Rodgers play in the Arena, we’re told it’s often ‘very Russian’ — indeed, Beluga vodka bars are already springing up along the beach in readiness. 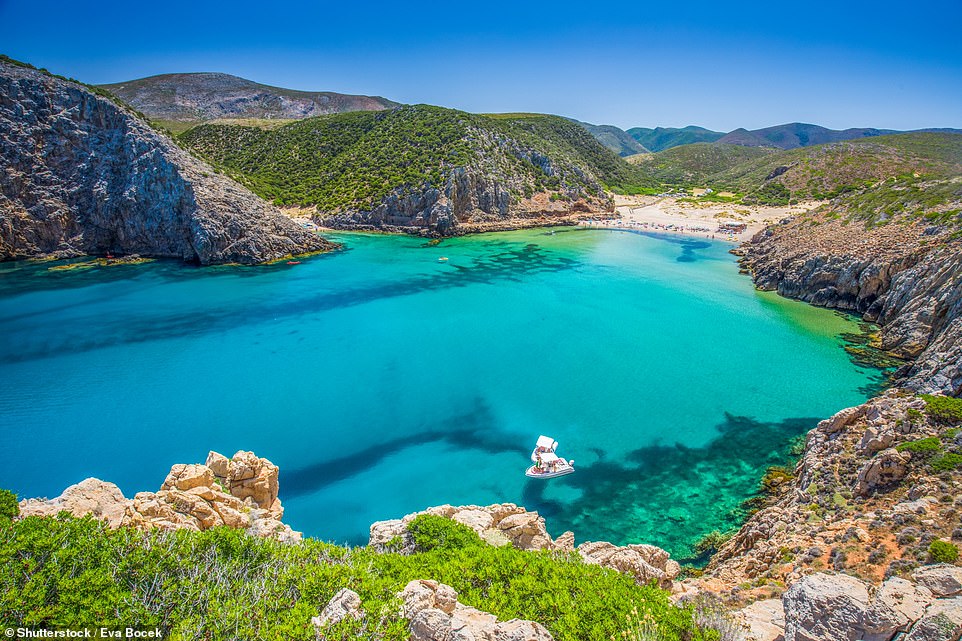 ‘Of course, Forte Village isn’t perfect,’ writes Jane. ‘You could be pretty much anywhere in the world.’ Pictured is Sardinia’s Cala Domestica beach 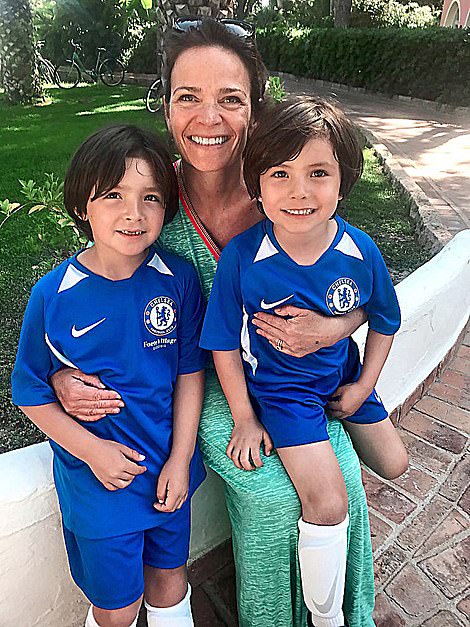 But for May half-term, it’s predominantly Italian and British and a surprisingly mixed bunch — lawyers, bankers, self-made millionaires, professional footballers, former footballers, aspiring footballers, pop stars (the guitarist for Kasabian stood out on the football touchline in black-and-white check socks), someone from The Apprentice that everyone non-famous seemed to get quite excited about.

Most are FV veterans — on their fourth, fifth, even 12th consecutive holiday. They know every inch of the place, most of the staff (many of whom have been here for years) and would never dream of venturing outside the security gates.

For a newbie — you can spot us a mile off — it can take a while to get our Forte Village mojo.

To be confident enough to join in the friendly dads’ football match at 6pm every day. To flag the white padded buggies as they whizz past to the beach, the children’s wonderland, the tennis academy. To discover the best restaurants, the superb Dune and the Cantina, by our reckoning. To know the resident parrot Scarlet Macaws by name and to get used to all the ostentatious wealth. (There was a brilliantly awkward moment at the bar by the football academy, when three wags turned up in identical £490 Hermes Oran holiday sandals.)

For Freddy and Sandy, it takes precisely five minutes. ‘This is the best holiday we’ve ever, ever been on. It’s like a dream place! When are we coming back?’ they cry, as they stuff all-inclusive pancakes and ice creams and pizzas and steak and pasta into their greedy little mouths before rushing off to hurl themselves down the water slides at the resort’s Aqua Park.

For me it takes one visit to the extraordinary spa where I receive the signature treatment — a salt and honey scrub and massage on a heated water bed.

Miles, meanwhile, takes a little longer. He tells me at least 20 times in the first day how he needs to ‘breach the compound’ or he’s going to go blow.

How he needs to feel like we’re actually in Sardinia, rather than an upmarket holiday camp.

Which is annoying, because I am comfy on my sun lounger, but he is persistent and so, as lunch is not included, each day we head out to local beachside restaurants for spaghetti vongole, Sardinian mussel soup, ice cold Ichnusa beer and a rather more Italian feel.

Of course, Forte Village isn’t perfect. You could be pretty much anywhere in the world. The beach is not quite as it looks in the brochure. A huge storm a few years ago did away with half of it and a valiant team battle daily with the seaweed trying to take over the once pristine golden sands.

The ‘extras’ — including bike and tennis court hire — are expensive. As are the academies — football is £312 per child for five days. A one-on-one yoga lesson would set you back £148, or a pedicure £89.

Forte Village is a bit like a cult. You spend the first couple of days a bit dazed, a bit confused, a bit reticent and not at all sure.

Then, by day three and without realising, you are whooping at the football, letting your hair down at the Queen tribute band in the piazza, and allowing your children to stay up later and later.

Until, by the end of the holiday, they’re playing football on the floodlit Astroturf at 11pm with 20 mates as you enjoy just one more glass of your new favourite Sardinian Vermentino with your surprisingly nice new friends.

And desperately calculating what you’d need to sell to afford to come back next year.

Travelers stranded because of sanctions against Russia: Travel Weekly

Flying and Grieving During a Pandemic