British Airways’ brand new Airbus A350 has flown its inaugural commercial flight, ferrying passengers from London to Madrid on a jet that promises to cut emissions while offering the most comfortable cabin in the airline’s fleet.

The aircraft, which is the first to feature BA’s new business class “Club Suite” offering a lie-flat bed and sliding privacy door, will be flown from Heathrow to the Spanish capital over the course of the next month to allow crews to familiarise themselves with the plane before it is rolled out on longer routes, starting with Dubai and Toronto in the autumn.

Passengers expecting a Boeing 777 built at the end of the last century were instead treated to the flag carrier’s newest arrival at the west London hub on Monday – day one of scheduled services. The first clue for travellers that the jet they were about to board was fresh off the Airbus production line were the A350’s gracefully blended wingtips that curve up to the sky, otherwise known as “sharklets”.

Inside, the differences are even more apparent. BA’s A350-1000 (the largest variant in the A350 family) offers passengers in even the cheapest seats a more comfortable ride, with higher air pressure and humidity and lower noise levels. Its cabin altitude of 6,000ft is 2,000ft lower than a B777 – and Airbus says its newest jet pumps 20 per cent more fresh air into the cabin than its nearest Boeing rival, the 787 Dreamliner.

But it is the passengers willing to pay top whack for business class seats that will really feel the benefit of the upgraded cabin. The radical redesign of the Club Suite has introduced flat-bed seats in a 1-2-1 configuration, meaning that every traveller has direct access to an aisle without having to climb over a neighbouring passenger. Each seat comes with its own sliding door, creating a personal cabin, along with an 18-inch high-definition screen for the in-flight entertainment and generous storage. 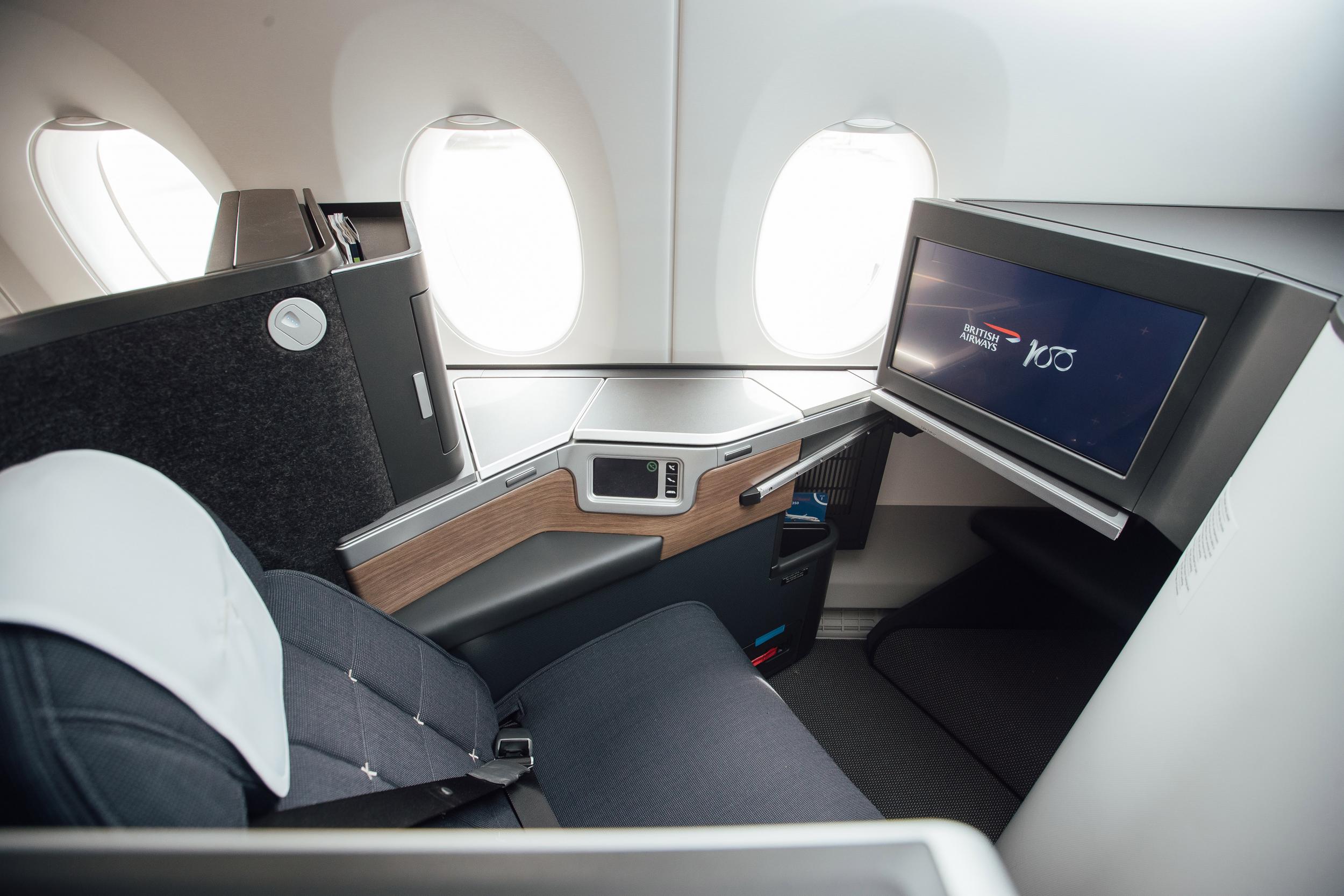 Even in economy, BA promises that its A350 passengers can enjoy much larger entertainment screens, USB charging points and a more ergonomic seat.

Speaking at the launch event at Heathrow, BA’s chief executive, Alex Cruz, said he hoped the new plane and suite would help propel the company up the Skytrax World Airline Award list (it fell from number 1 in 2006 to 31st place in 2018, but climbed to 19 this year).

The A350 is one of the most fuel-efficient aircraft operating in the world today, with around 25 per cent less CO2 emissions per seat compared with previous generation aircraft such as the Boeing 767.

BA has bought 18 of the jets, which will carry 331 passengers at a maximum speed of 682mph and a range of 16,100km (8,700 miles). Singapore Airlines uses an ultra-long range version of the smaller A350-900 to link the island city-state with New York – the world’s longest non-stop commercial flight.

Tel Aviv and Bangalore will be the next two destinations to be added to BA’s A350 flying programme later this year. Mr Cruz said it was to early to say whether the jets would be used to open up new routes not currently served by the airline.

It’s hard not to be impressed with the experience onboard BA’s new A350. This was my first flight in a business class seat, and it didn’t disappoint. The first thing you notice is how bright the cabin is, and how thoughtful the design details are for each seat. The neat reading light incorporated into the side of the seat, the soft-close storage compartments and the touchscreen panel that allows you to recline all the way to horizontal.

It is quietest of quiet cabins – I barely noticed the engines powering up on take-off – and the food, part of a new menu, was genuinely delicious.

The inflight entertainment provided on a large screen was also a joy to use. At 6ft 2in tall, I could stretch out on the lie-flat bed and could imagine comfortably getting some sleep on a long haul flight – though I was too busy trying out the features of the new plane to snooze. The sliding door has to be kept open for take-off and landing but on a longer overnight flight the additional privacy of a door would be welcome.

The result is a seat that feels both intimate and incredibly comfortable. I disembarked in Madrid feeling noticeably less travel-weary and only wished the flight had been longer.

Of course, the majority of people won’t choose to fly in business, and BA is promising an improved offering to passengers in all classes, including in economy where the seat back entertainment has benefited from an upgrade.

Flight secrets: Cabin crew member reveals one thing you should not do while on a plane

Oceania Cruises Will Return to the Sea This August

How Bermuda Emerged as a Low COVID-19 Risk Travel Option