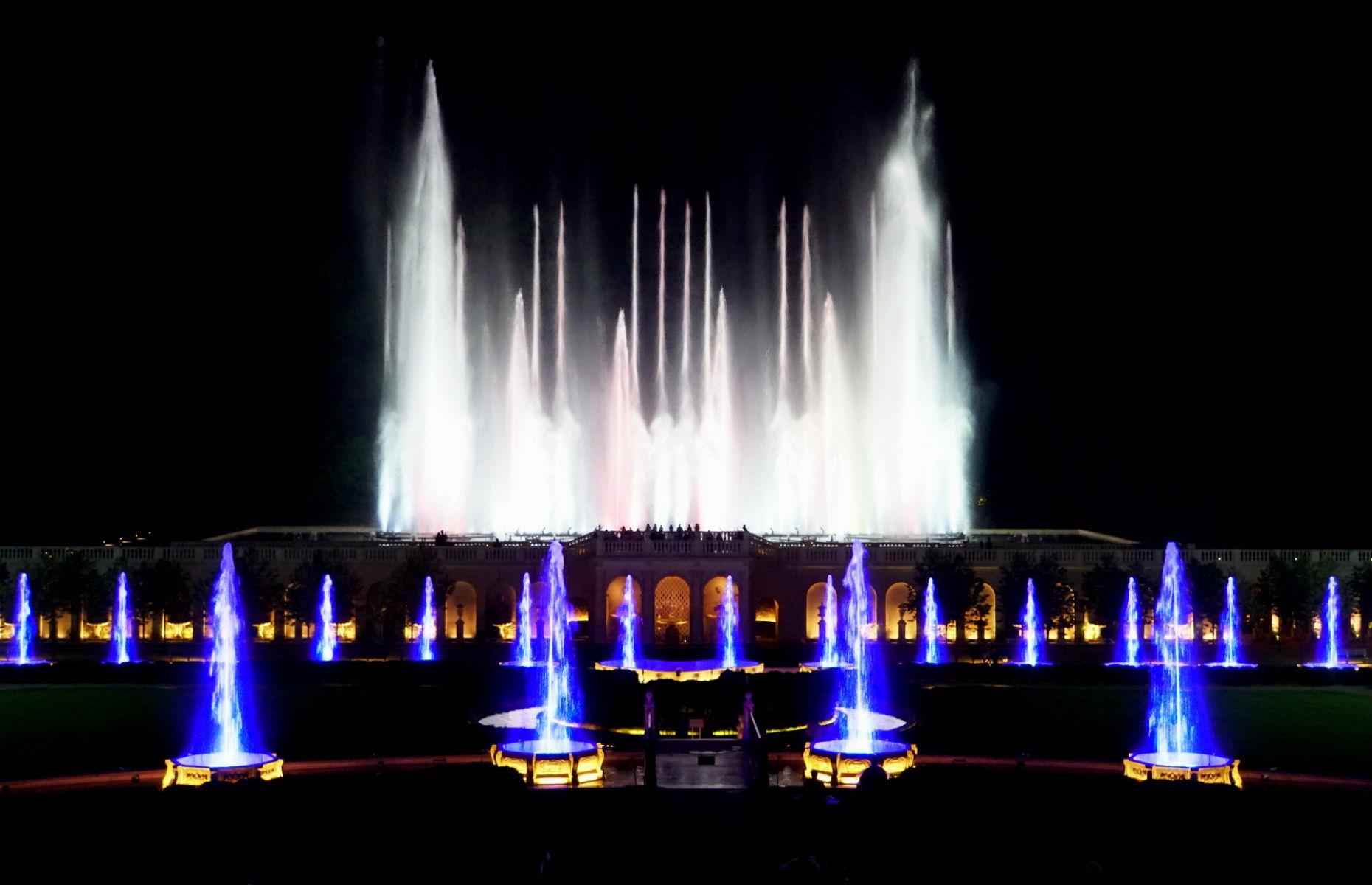 The world in water

This spectacular explosion of color, light, motion, music and water acrobatics comes to you from the end of the Avinguda de la Reina Maria Cristina, just below the Palau Nacional (National Palace) in the Catalan capital. As many as seven billion light and water combinations create sequences of splendor to different genres of music – from cartoon soundtracks to Spanish classical music – for its millions of visitors every year.

A bridge isn’t an obvious place for a fountain, but when it spans the whole width of the Han River, you can’t help but be amazed at its design. Both sides of the double-decker Banpo Bridge, which links the districts of Seocho and Yongsan, are lined with pumps that spray 200 tons of river water out every minute. The Rainbow Show takes place both during the day and at night, and it’s the latter which is unmissable. Shows last 20 minutes and operate between April and October.

Sitting in the center of Flushing Meadows Corona Park, the 140 feet high steel globe has become a symbol of Queens. But when the fountains surrounding the Unisphere are switched on, the spraying water helps to give the impression that the globe is floating off the ground. Drama ensues at dark when the site is illuminated. If you catch it as the sun sets with just enough light for the water to sparkle, with the Manhattan skyline in the background, it’s even more spectacular. Head to the side streets of Flushing, west of Main Street, for the best vistas. Check out our guide to the best boutique hotels that won’t break the bank in the Big Apple.

Literally translating as “water jet”, this mega fountain on Lake Geneva is a sight to behold. Built in 1886 to control and release excess pressure from a hydraulic plant, it accidentally became a tourist attraction when its presence gave power to the place. Now a symbol of the city, its strong engines pump 100 gallons to the height of 460 feet every second from a stone jetty. It isn’t on constantly though (it’s switched off at night and in strong winds), but it’s hard to miss, particularly when flying into Geneva Airport.

High on many tourists’ agendas when they visit Rome, the Trevi Fountain deserves to be mentioned in this round-up despite not putting on a water show, per se. Designed by Italian architect Nicola Salvi, the origins of this Baroque beauty date back to 19 BC. The fountain features Neptune on a shell-shaped chariot as the centerpiece, being pulled by two horses, each one guided by a Triton, while statues of Abundance and Salubrity look on from above. You can hear its presence streets away, as 2,824,800 cubic feet of water tumble down the rocks into the large pool in front.

Celebrating the Tang Dynasty era in all its glory, the daily fountain show set against a beautiful backdrop of the ancient Giant Wild Goose Pagoda is dubbed the greatest water-based spectacle in China. Light beams cast huge shadows across the sky while more than 1,000 nozzles sprout water in time to the music – usually Chinese and classical pieces – and are choreographed to perfection. As some streams of water are propelled nearly 200 feet in the air, visitors often get a bit wet. It’s all part of the fun, of course.

The world’s largest water fountain park can be found in the Parque de la Reserva, just south of central Lima, with as many as 13 fountains all showcasing their own characteristics. While it’s impressive by day, it’s at night when you’ll require a fully-charged camera, and also when you’ll need to pay. Tunnels of water, beautifully lit up, are intriguing enough, but it’s the main fountain that will really blow you away. Images of Peru, sound, laser light and water all merge to create an incredible display. Don’t leave without attempting the Maze of the Dream, made with vertical walls of water.

Located in the heart of Sydney’s Hyde Park, the Archibald Fountain depicts Greek gods – with Apollo in the center – and mythical creatures emerging out of a pool, throwing out jets of water in a peaceful setting. Built at the bequest of its namesake who was the editor of the now defunct Bulletin magazine, the 87-year-old sculpture has become a much-loved feature to locals and sightseers alike. Discover what to see, do and eat in Sydney with our full city guide.

Designed in Beaux-Arts style, Chicago’s landmark is one of the largest fountains in the world. While there’s plenty going on, with four pairs of seahorses that symbolize the four states bordering Lake Michigan’s shoreline, it’s the center jet that steals the show. As part of a 20-minute water display that happens on the hour every day, it shoots 150 feet (45.7m) into the air. Music and light play a big part too, but the 15,000 gallons of water that circuit through the structures every minute is a delight to watch.

This style of vertical jets of water is mimicked the world over, but it’s also the grand statue of Alexander the Great on horseback that makes this water display all the more special. Behind the dancing fountains lining Macedonia Square, the bronze figure of Alexander, perched on a white marble fountain with warriors and lions protecting him, puts on its own performance. Water cascades down like rain while loops of liquid shoot up and over.

While not quite in the same league as the emirate’s main spectacle (see that later on), this 80-foot (24.3m) wall of water adorned with fiberglass sculptures of divers is mesmerizing all the same. Traversing all four stories of the Dubai Mall, it creates a clever – yet almost scary – dynamic, visual effect with the flow of the water. Apparently, the Singapore-based architects who designed the feature, that’s also known as the Human Waterfall, did so with the aim of attracting shoppers’ attention. It’s safe to say that’s exactly what it does.

Also known as Jeddah Fountain, this is one gigantic, constant eruption of water. At a height of 1,024 feet, it’s the tallest fountain in the world by some distance. Its relatively simple design showcases a massive plume of water that shoots vertically into the air at a speed of 233 mph and its power wows onlookers for miles. Situated on the coast of the Red Sea, the fountain has more than 500 high-intensity spotlights used to illuminate it when the sun goes down. The salt water fountain, built in the 1980s, was donated to the City of Jeddah by the late King Fahd bin Abdul Aziz.

While many people come across these fountains en route to Peterhof Palace, they can’t help but watch in awe at the busy spectacle. Operating between May and October only, a terrace of fountains with golden statues and mosaics clutter the ascent to what’s dubbed the Russian Versailles. The surrounding gardens, manicured to perfection, are striking enough, but once Samson (you’ll spot him in the center, tearing open a lion’s jaw) and the surrounding 140 fountains and canals get going, it’s hard to prise your eyes away.

Another display that comes to life after dark, these singing fountains play for their audience (locals and tourists alike) during certain evenings in summer. The special water and light show, with accompanying classical music of course, is the ultimate place to hang out with friends. Situated in the Tsar Simeon gardens, the fountains and vast pool mark the end of the pedestrianized promenade. See our guide to Plovdiv, the European Capital of Culture 2019.

Often named best and coolest airport in the world, Singapore’s Changi has taken things up a notch in the form of its new $1.7 billion mixed-use facility called the Jewel. Set to open this year, the complex has the tallest indoor waterfall in the world – the Rain Vortex. At 131-foot-high, water pours down seven stories from an oculus in the airport’s glass-domed roof, surrounded by terraces of gardens. At night, a 360-degree light and sound show is projected onto it, making the scene fascinating.

The centerpiece of Versailles’ gardens, this former pond illustrates the story of Latona, Apollo and Diana’s mother from The Metamorphoses, and her encounter with the peasants of Lycia. In Ovid’s version, the insulting peasants are turned into frogs and lizards, hence the 24 frogs on two tiers above figures of lizards, turtles and six peasants. Latona, of course, is in the middle with her children and when the water is flowing, these angry creatures spit water up at them.

One of the most iconic water displays in the world, the $40 million dancing fountains outside the Bellagio are as popular and as mesmerizing as Vegas itself. Each day at varying times, thousands of individual fountains dance to numerous songs enhanced by light and choreography that will blow you away. Spanning 1,000 feet, the water reaches heights of 460 feet and the maximum amount in the air at any one time is a staggering 20,416 gallons. They’re unmissable if you’re visiting.

If there was one word to sum up this unusual water display, it would be quirky. There are no huge jets of water reaching staggering heights or fancy light and music effects here. Often described as silly, the abstract sculptures that make this fountain fun represent the works of a great modern classical composer Igor Stravinsky. Set in central Paris, the display includes a pair of red lips, a clown’s bowler hat, a mermaid and a treble clef no less. According to sculptor Jean Tinguely, the circus-like chaos is supposed to evoke the music maestro’s encounters with jazz.

This mesmerizing display of water, light and music is quite frankly the most spectacular of all, in our opinion. The world’s largest choreographed fountain system cannons water as high as 500 feet in the air from its setting in front of the Burj Khalifa in Downtown Dubai. Powerful, illuminated jets are strategically placed in five circles over an area the size of two soccer pitches, swaying in time to a range of music to create a captivating show that can be seen from over 18 miles away. It really is a visual masterpiece. Catch the show every 30 minutes from 6 pm daily.

A New Look at the Great Aussie Road Trip ·

What unites us? A new book explores Americans’ love of home and country