Home » Travel » The oddest traditions from around the world revealed

Jumping over babies, marching ducks and ‘mooning’ at Amtrak trains: The oddest traditions from around the world revealed

They range from the risky to the heart-warming – but what they have in common is that they’re all very strange. To outsiders, at least.

Here we present some of humanity’s most downright baffling traditions. Some, such as the Busojaras festival in Hungary, where locals dress up as woollen monsters, go back centuries, others date back a handful of decades – like the annual mooning-at-Amtrak-trains festival.

They’re all fascinating, though – more so because the people that participate in them do so with such fervour. Scroll down and revel in the weirdness. 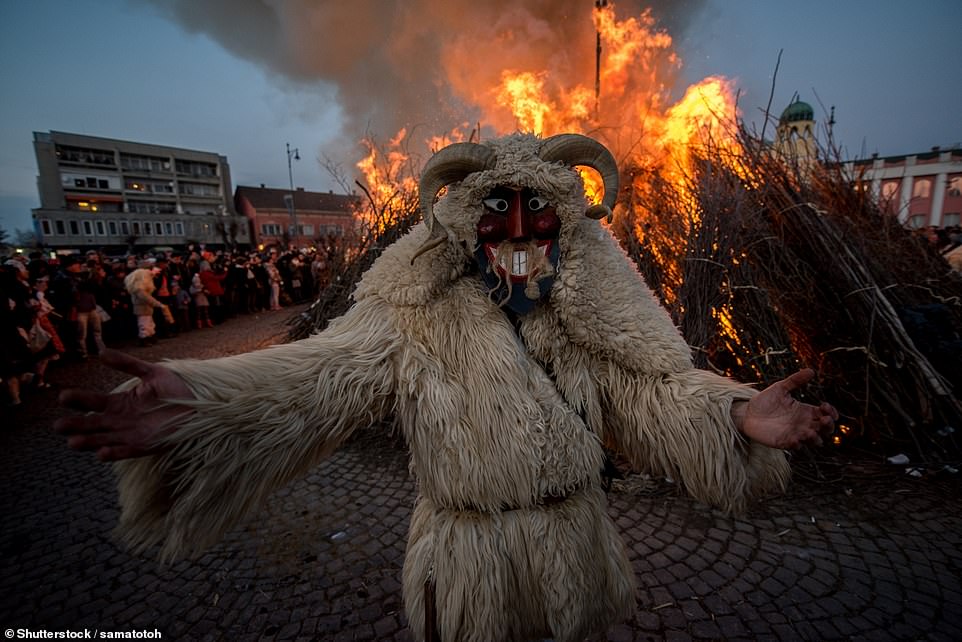 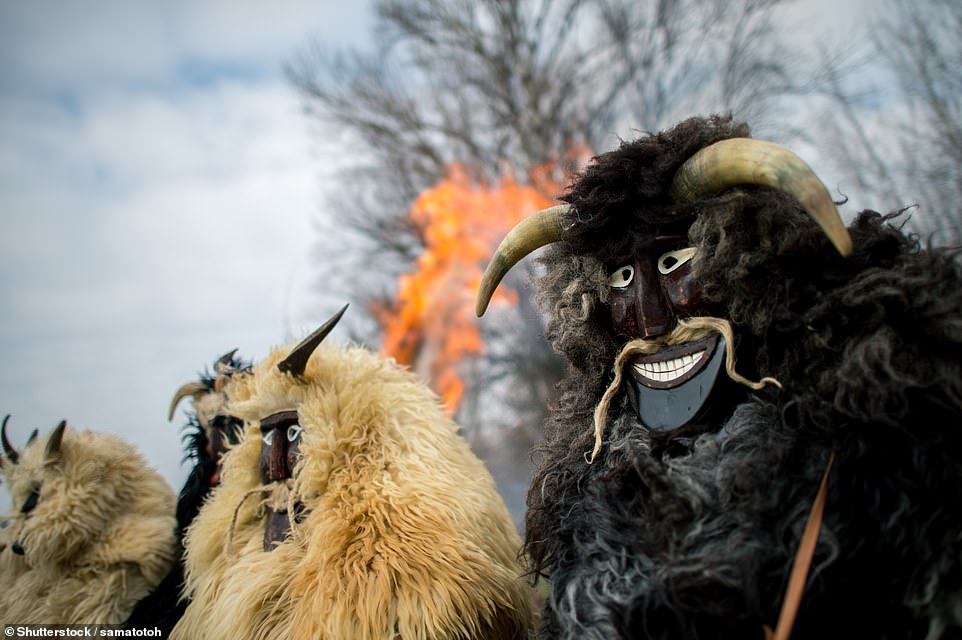 The festival is said to scare away winter. But another legend says it originates from when villagers dressed as grotesque monsters to scare off the invading Turkish army in the Battle of Mohács in 1526

During the month of February people in the Hungarian town of Mohács don woollen horned monster outfits and take to the streets.

Lasting for six days, the vibrant Busójárás festival sees a man made of straw set alight on a bonfire, with some saying this represents scaring away winter.

The Unesco cultural heritage festival is also said to pay homage to a legend that claims villagers dressed as grotesque monsters to scare off the invading Turkish army in the Battle of Mohács in 1526. 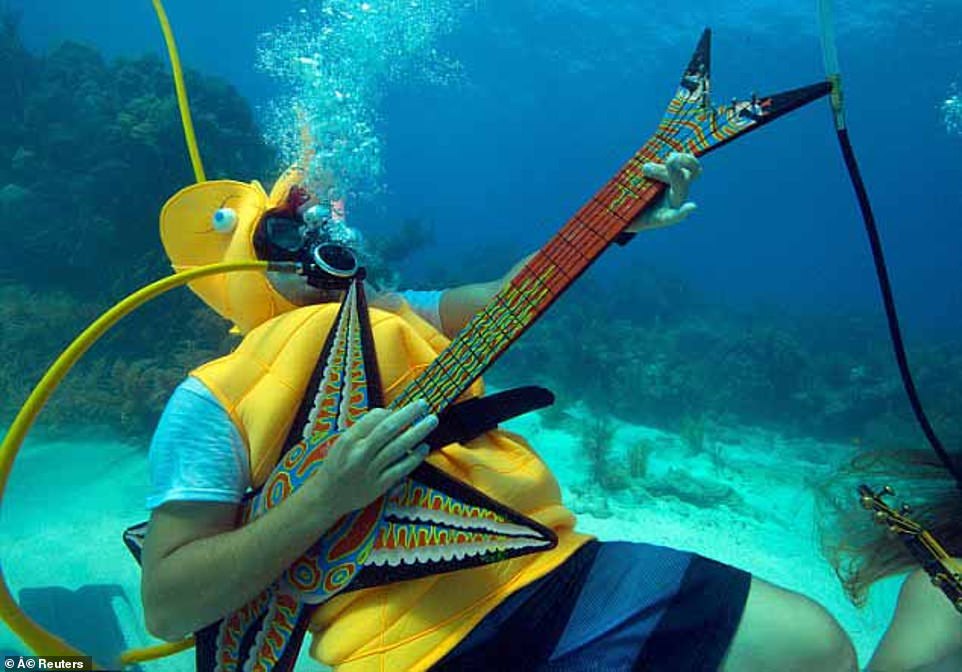 Each July, hundreds of music-loving snorkelers and divers hold an underwater concert at the Florida Keys National Marine Sanctuary.

They duck under the water to pretend to jam on mock guitars or play other fake musical instruments.

During the four-hour music session, popular songs that are played include the theme from The Little Mermaid, the Beatles’ Yellow Submarine and Jimmy Buffett’s Fins. 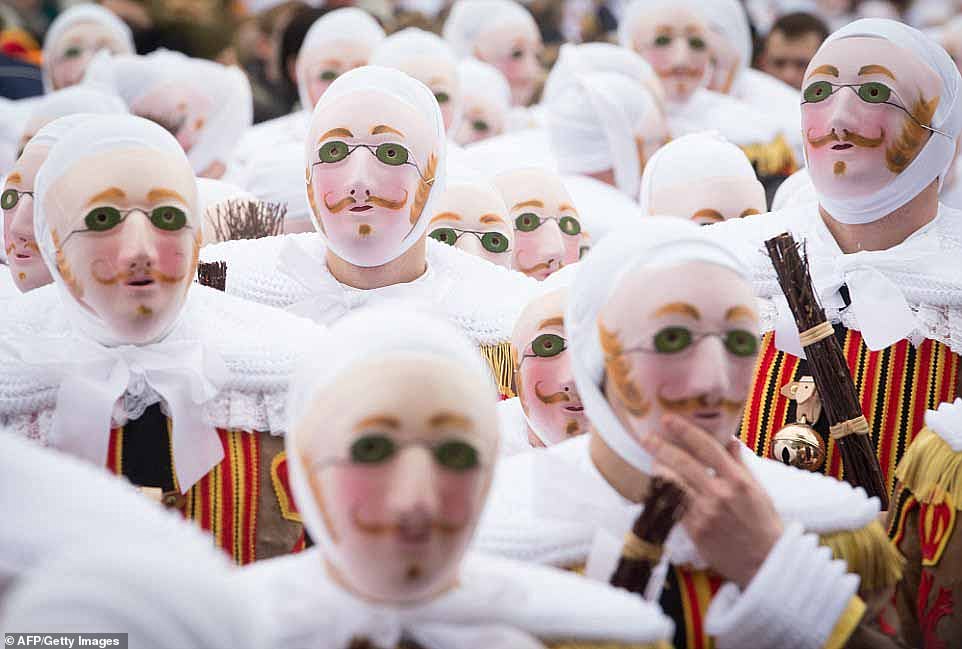 The Carnival of Binche is held in the Belgian town each year on the Sunday, Monday and Tuesday leading up to Ash Wednesday.

It sees up to 1,000 men and boys dressed as ‘Gilles’ taking to the streets in vibrant dress, with wax masks and wooden footwear.

The celebration dates back to the 14th century and has been listed by Unesco as a ‘Masterpiece of the Oral and Intangible Heritage of Humanity’. 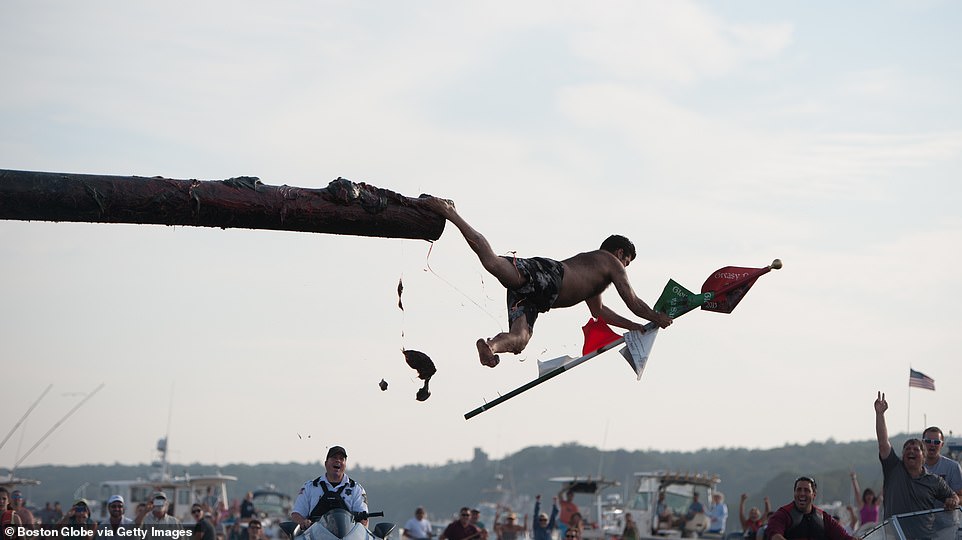 The Italian community in Gloucester, Massachusetts, holds the greasy pole celebration every year to mark a safe and successful year at sea 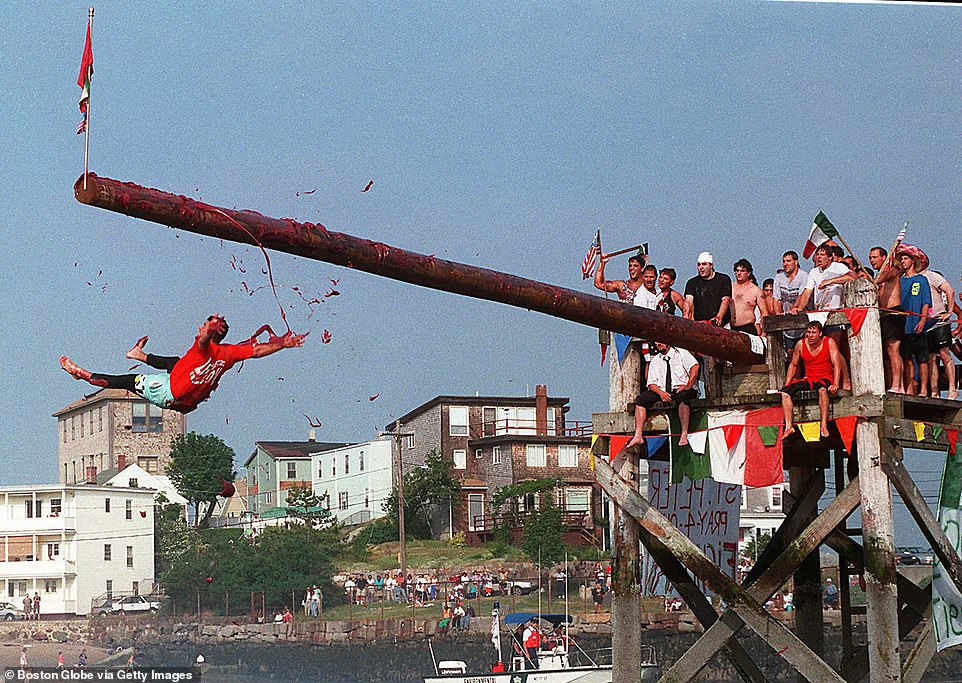 To mark a safe and successful year at sea, the Greasy Pole celebration has taken place annually since 1927 in Gloucester, Massachusetts.

It sees fisherman in the Italian community try to clamber along a pole sticking out into the harbour that is coated with the likes of axle grease and banana skins.

The aim is to grab an Italian flag waiting at the end of the pole. The failure rate is high. 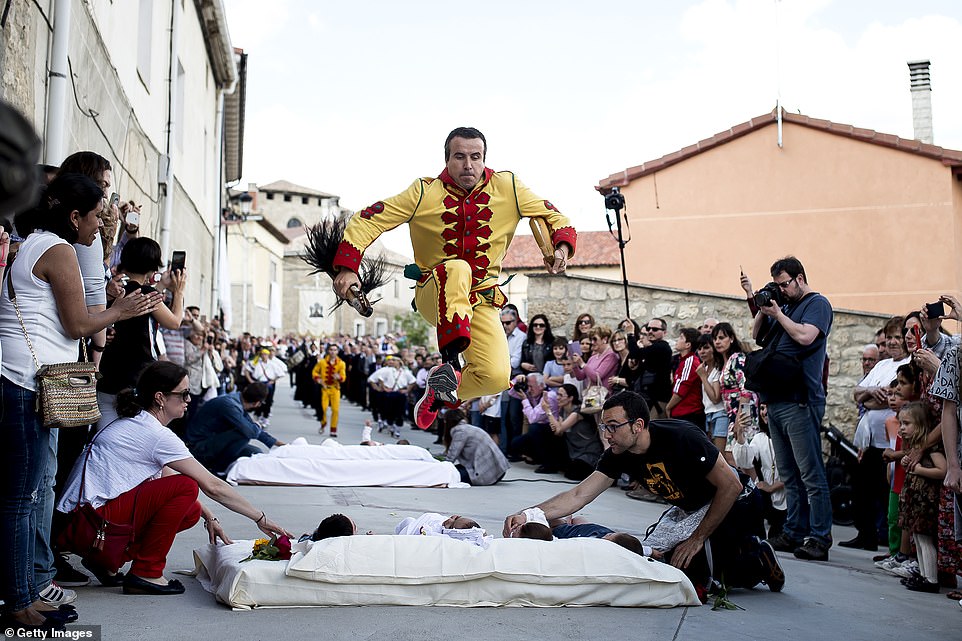 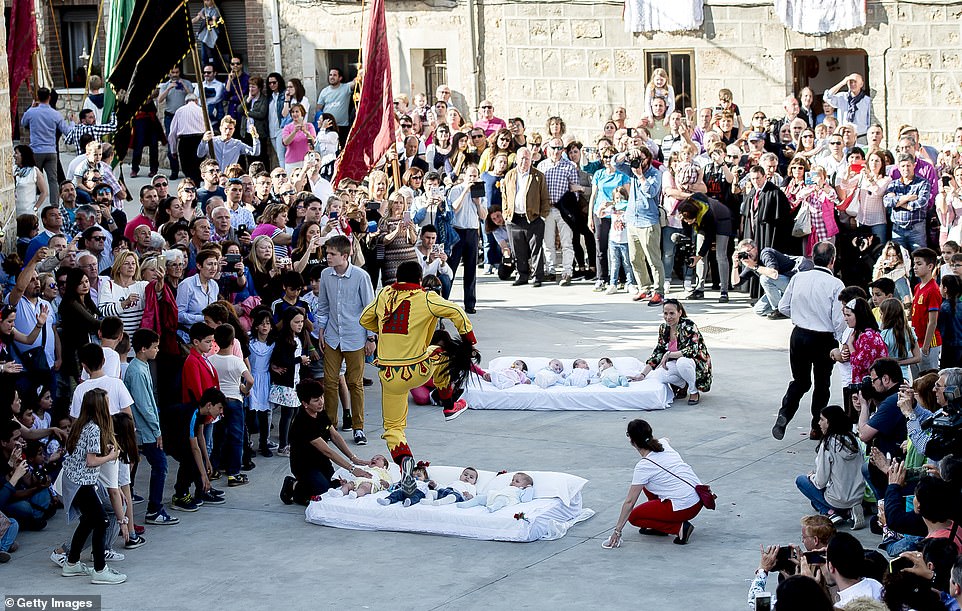 The belief is that when the ‘devil’ leaps over the babies, he takes evil away from them. The ritual takes place after the feast of Corpus Christi in June

In this bizarre Spanish tradition, one-year-olds are laid out on the ground so a man meant to symbolise the devil can jump over them.

It takes place in the village of Castrillo de Murcia, near Burgos, where it is thought that as the ‘devil’ leaps over the babies, he takes away any evil lurking in them.

It is the culmination of a four-day celebration after the Corpus Christi feast in June. 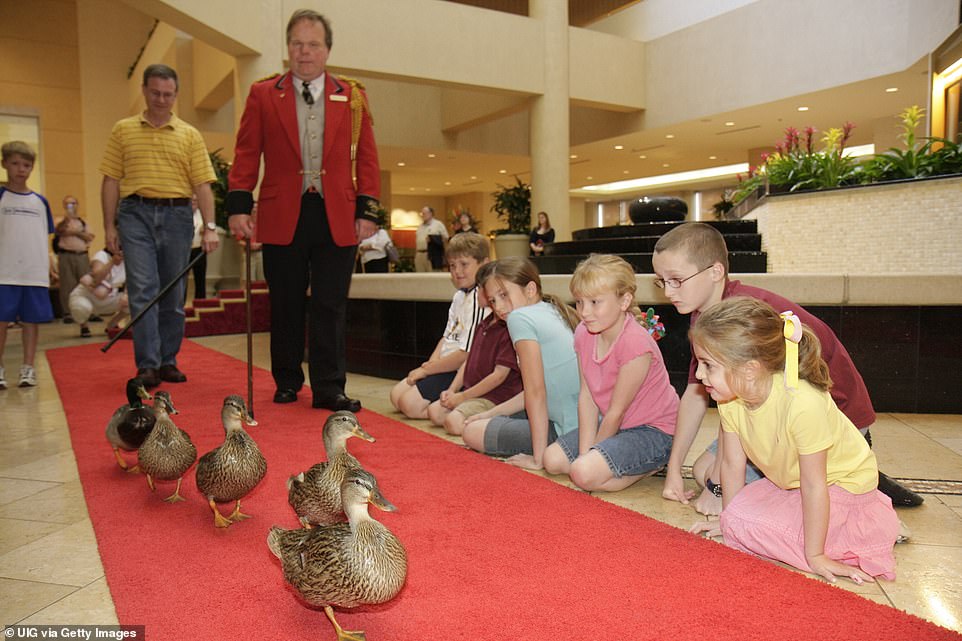 At the Peabody Hotel in Memphis, every morning a parade of ducks makes its way to the fountain in the lobby in a procession dating back almost 90 years.

They are guided by a hotel employee known as the duck master who at 5pm each day shows them back to their home on the hotel’s roof.

Both parades draw a big crowd comprising guests both young and old.

Battle of the Oranges, Italy 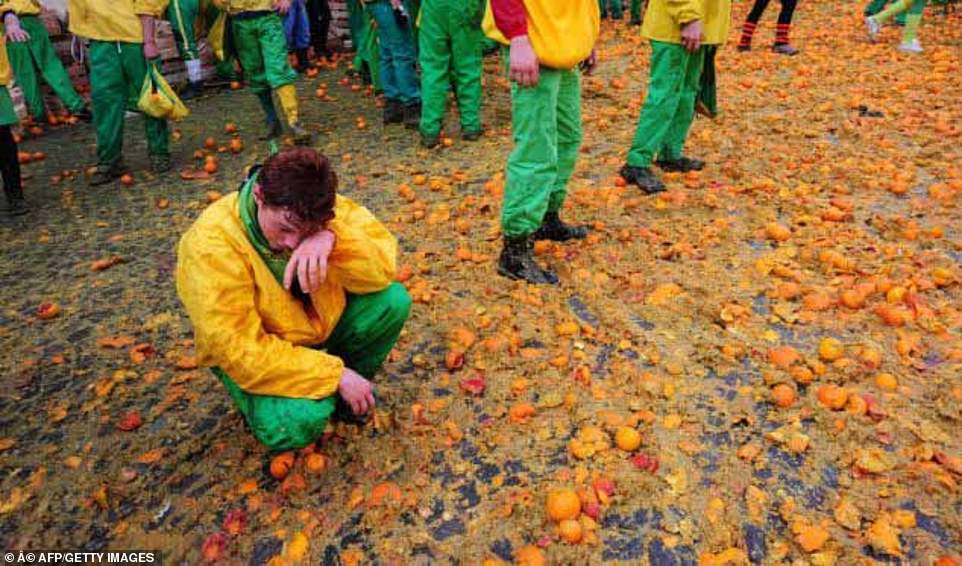 Each February in the small northern Italian city of Ivrea, people throw oranges at each other

The city is said to bring in 57,000 crates, or 400 tons worth, of oranges from southern Italy that would otherwise be thrown away for use in the famous battle.

Its origins are unclear but the festival is said to have stemmed from the 19th century when rebellious commoners threw away food the feudal lord had given them. 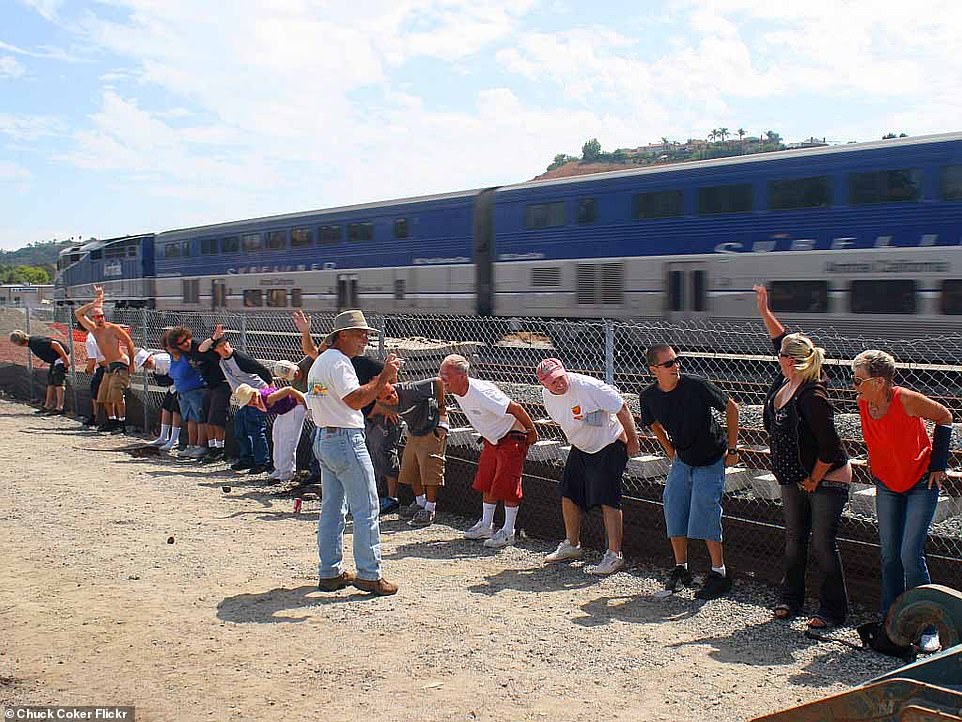 In the Californian city of Laguna Niguel, people gather annually in June to drop their trousers at passing Amtrak or Metrolink trains

Dozens of people descend on the Californian city of Laguna Niguel each July to ‘moon’ at passing trains.

Participants are encouraged to drop their trousers when Amtrak or Metrolink trains pass by on their journeys both north and south.

The bizarre tradition started in 1979 when a customer at the nearby Mugs Away Saloon dared his buddy to drop his dacks as the next train approached. The wager was a free drink. 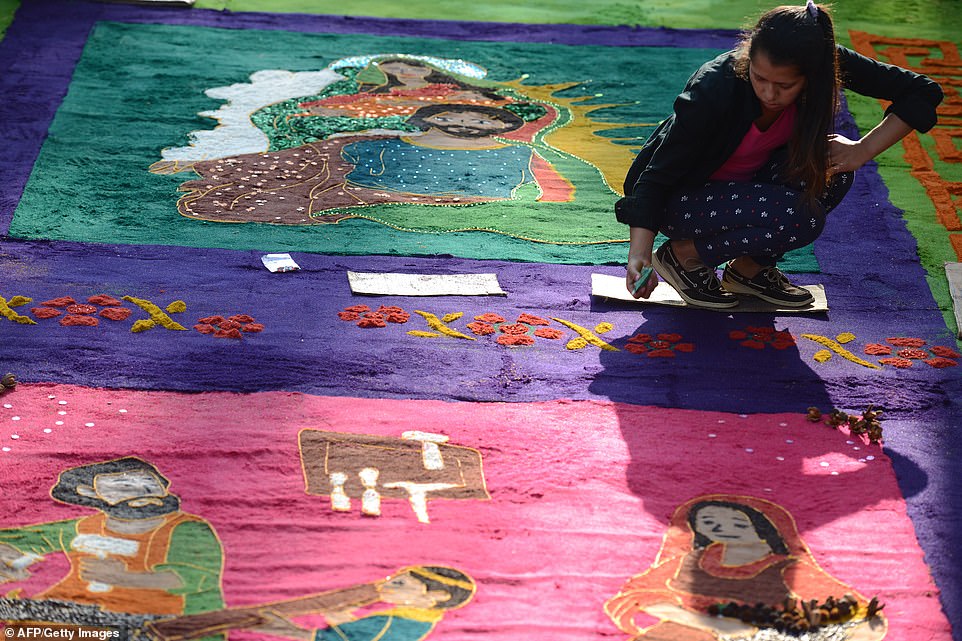 Each Easter, locals in the Honduran city of Comayagua spill out into the street to create elaborate artwork using coloured sawdust.

The designs are usually intricately detailed and wonderfully coloured.

The tradition only started in 1963, when a local woman created a sawdust carpet showing a lamb outside the city cathedral to commemorate the inauguration of a new bishop. 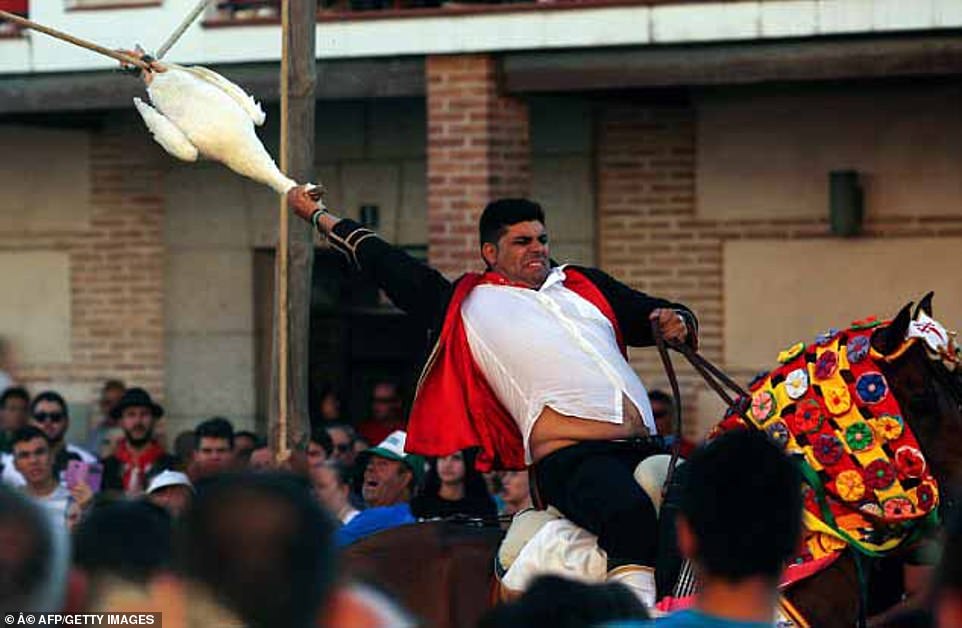 The St. James Festival is held in the village of El Carpio de Tajo and sees horse riders compete to try and yank the head off a dead goose suspended to a wire

In one of the more gruesome traditions, horse riders in Spain compete to try and yank the head off a dead goose suspended to a wire.

The St. James Festival is held in the village of El Carpio de Tajo in the province of Toledo. The strange spectacle originated as a military training exercise in the Middle Ages as the Spanish fought to liberate their homeland from Muslim conquerors.

In the past, horsemen would attempt to decapitate a live goose, but it was deemed unnecessarily cruel so dead animals were phased in.

Seven plane passengers in hospital after cabin fills with smoke

Travel warning: Amsterdam hit with wave of mail bomb explosions – is it safe to visit?