Regeneration of tacky tourist-trap Leicester Square in London continues with a new £300m five-star hotel set to open in 2020 (and of course, it has a couple of cinemas)

London’s Leicester Square is taking another step to shedding its tacky tourist-trap image thanks to the opening of another swanky hotel.

And of course, since this is the capital’s cinema district, it houses a couple of Odeons.

The Square is already home to plush W and Radisson hotels. They will be joined in 2020 by the £300million five-star The Londoner. 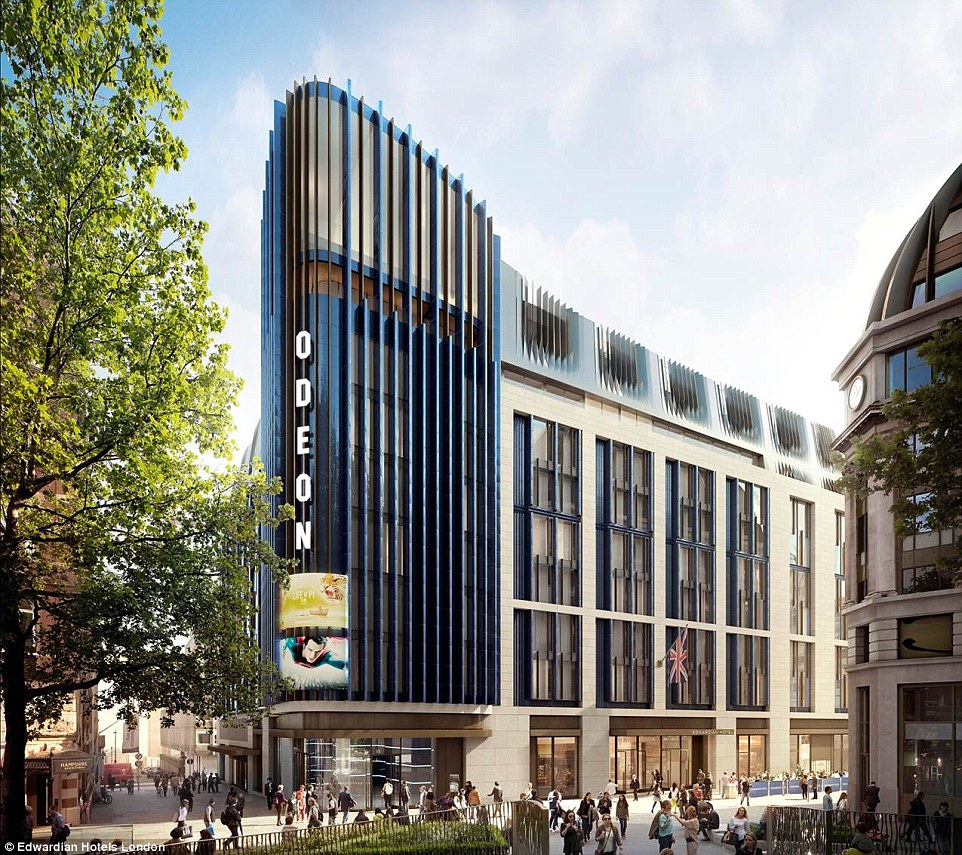 The five-star hotel will be set across 15 floors and will have 350 rooms, including 15 suites, as well as five concept restaurants and a rooftop bar

The new property, which is being described as a ‘pioneering, purpose-built destination’, is being developed by Edwardian Hotels London.

It will have 350 rooms, including 15 suites, across 15 floors as well as five concept restaurants and lounges and a rooftop bar.

As well as two Odeon Luxe cinemas, The Londoner will also have a state-of-the-art ballroom for up to 1,000 guests as well as a subterranean spa. 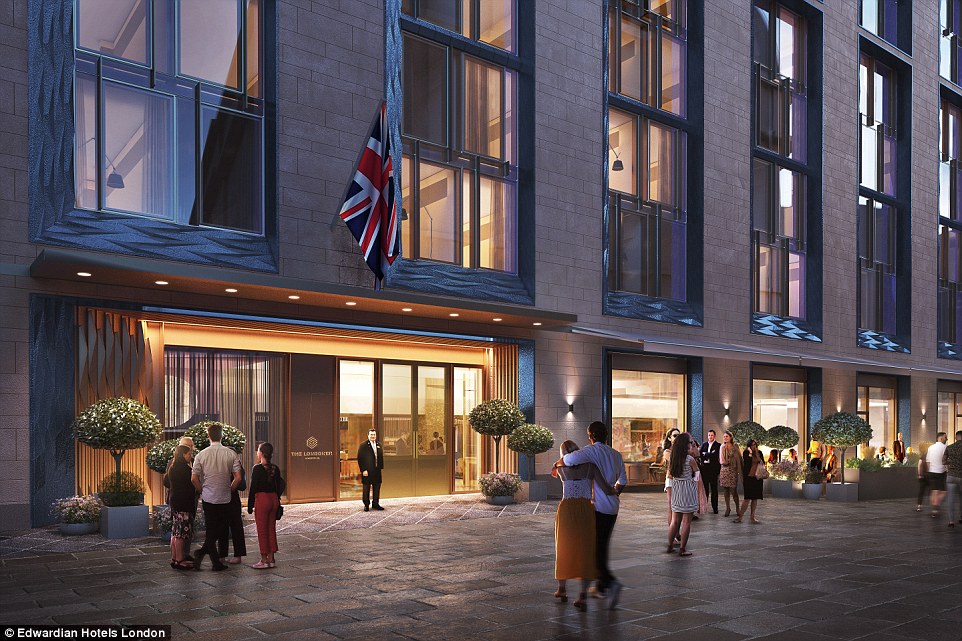 An artist’s impression showing the entrance to the hotel. The hotel will boast two new Odeon cinemas, naturally 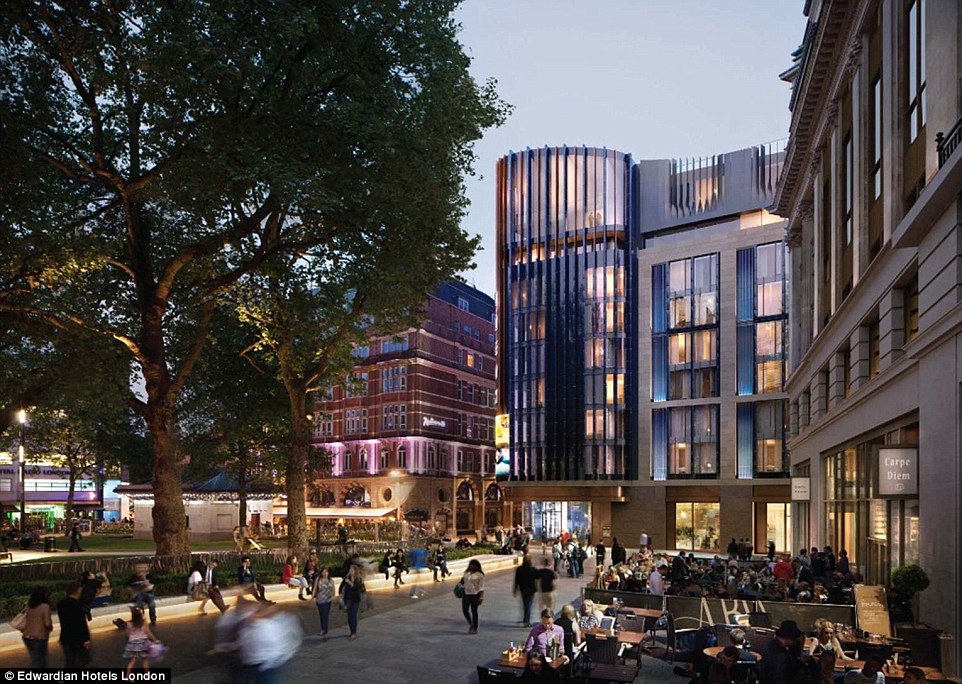 The new property, which is being described as a ‘pioneering, purpose-built destination’, is being developed by Edwardian Hotels London

‘Building a complex and ambitious project in an iconic area is a demonstration of our commitment to London and our ability to deliver high-quality, sustainable, integrated hotels designed for the future.

‘We are privileged to play a pivotal role in the regeneration of Leicester Square and contribute to the evolving skyline of London.’ 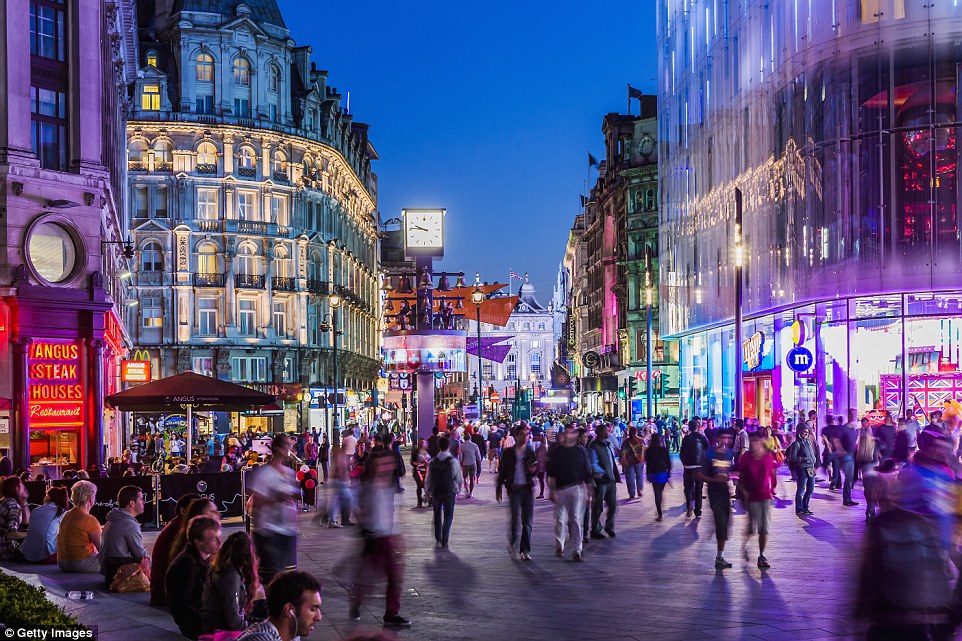 Leicester Square, in the heart of London’s West End. Many regard the area as one of the city’s most efficient tourist traps

Rob Steul, creative director at Edwardian Hotels London and lead designer of The Londoner, added: ‘It has always been the vision of our chairman to develop a lifestyle hotel destination in a prime central London location.

‘And I feel privileged to have had the opportunity to bring this aspirational vision to life, from conceptualising the original design through to overseeing the development and delivery of the hotel.

‘The Londoner celebrates and captures the drama of its vibrant West End neighbourhood and I am confident that its striking contemporary design, sophisticated social spaces and its collection of distinctive restaurants and lounges will set it apart.’

'AirShield' device for plane cabins would 'prevent spread of Covid-19'