The most expensive and cheapest landmarks to live near revealed – and it’s the Hollywood Sign that sends prices soaring the most, with houses nearby costing 1,000% extra

The iconic Hollywood Sign is the most expensive landmark to live near, research reveals.

It costs an average £1.2 million ($1.5 million)  – or 1,057 per cent – more to live within a mile of the sign than it does elsewhere in Los Angeles, figures assessing the inflationary effect of the 20 most-visited global landmarks reveal.

The second most inflationary landmark is the Burj Khalifa. Proximity to this Dubai icon adds an average 687 per cent to property prices or £843,966. 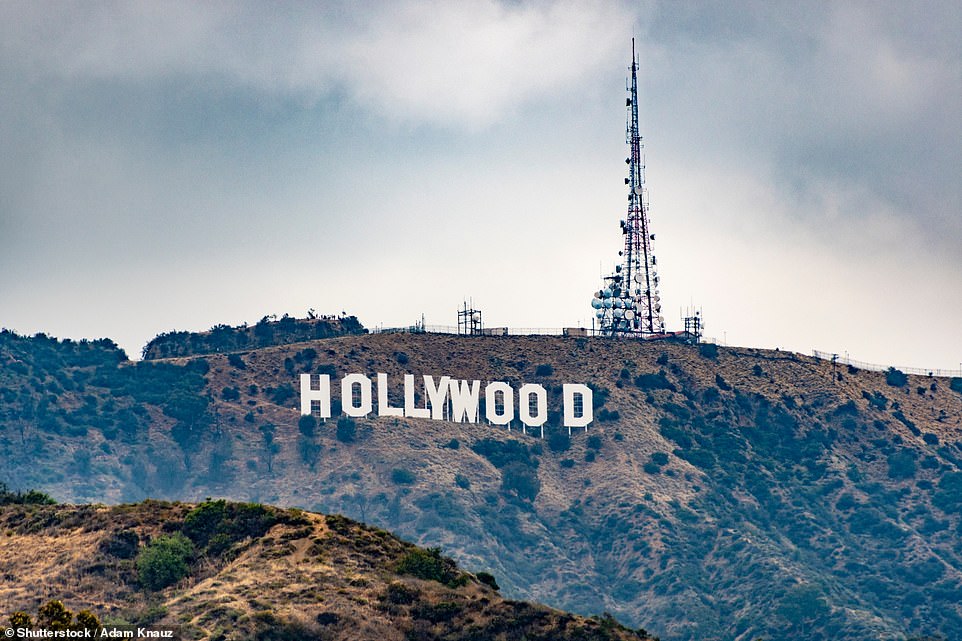 And the winner is: The Hollywood Sign (above). The landmark has the most inflationary effect in a poll of 20 landmarks, boosting the price of properties that are located close to it by a colossal 1,057 per cent 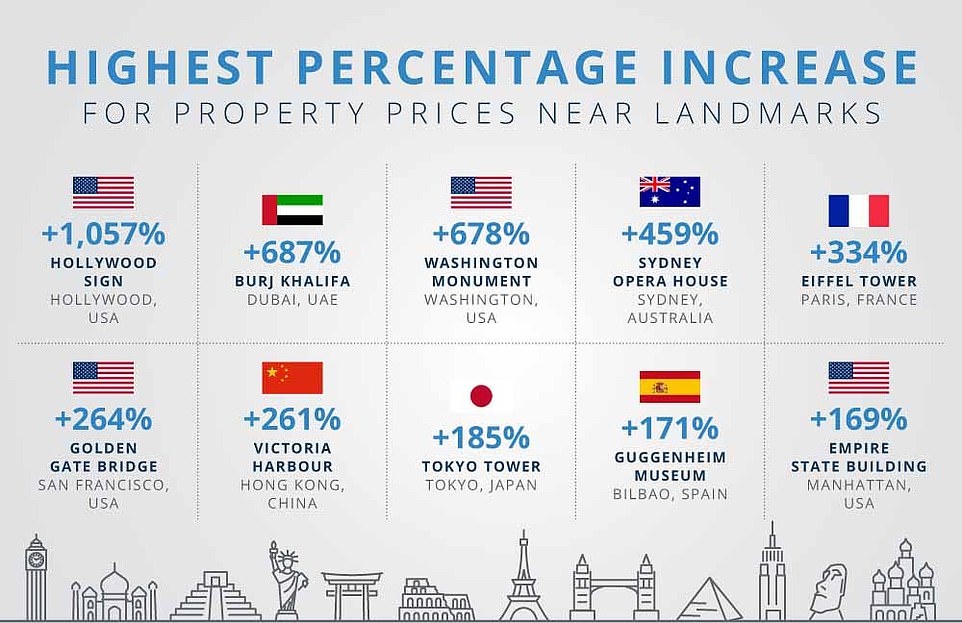 Landmark increases: The top 10 landmarks for pushing property prices up 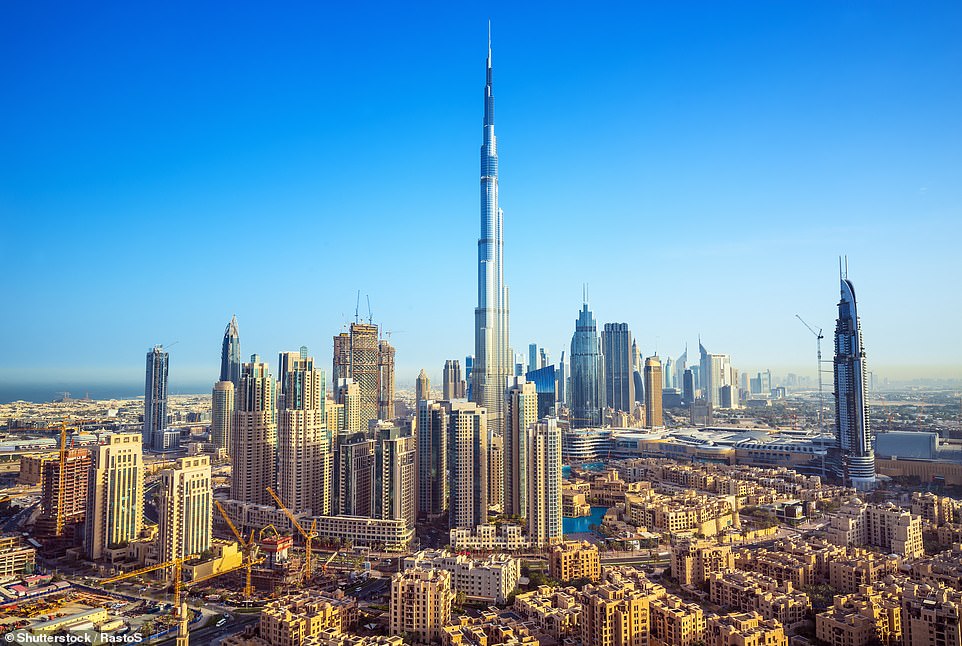 Reach for the stars: Downtown Dubai (above) and the 160-storey Burj Khalifa. Proximity to the Emirati skyscraper adds about 687 per cent to the price of property, making its inflationary effect second to the Hollywood Sign

The Emirati skyscraper is closely followed by the Washington Monument, DC.

Properties close to the attraction cost about 678 per cent or £1.8 million ($2.3 million) more than properties of equivalent size elsewhere in the US capital.

Properties within reach of the Sydney Opera House command 459 per cent – or £2.2 million (AUS$4 million)  – more than properties elsewhere in the city while The Eiffel Tower hikes up property prices within its Parisian neighbourhood by 334 per cent, or £1.9 million (2.1 million euros). 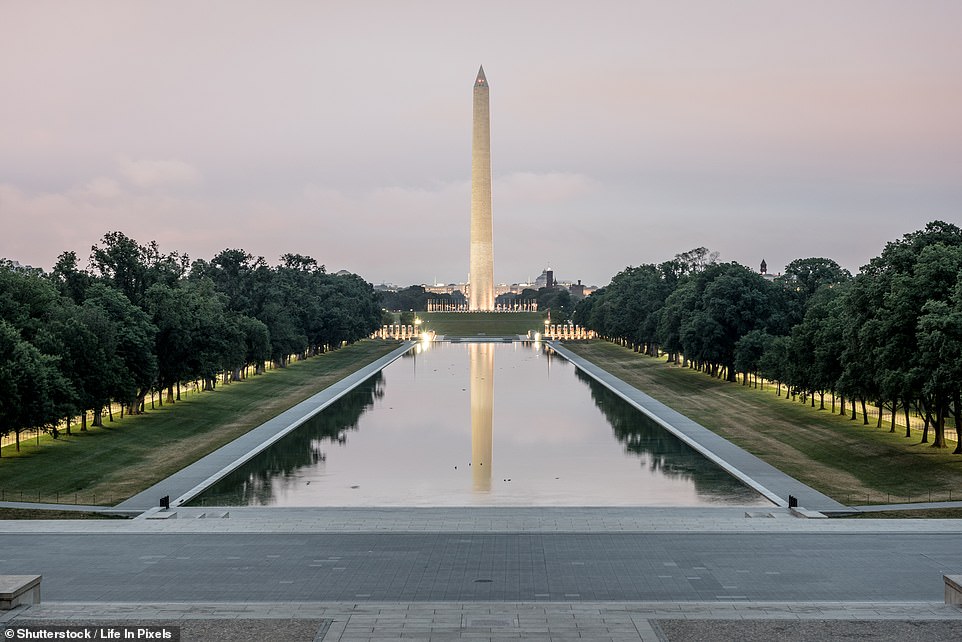 Monumental effect: The Washington Monument on the National Mall, Washington, DC (above), is an imposing sight. Its impact on property prices in the neighbourhood is as staggering, boosting them by an average 678 per cent

The top ten: The most visited global landmarks inflate property values by hundreds of per cent and millions of pounds

At the other end of the spectrum, it’s a thumbs down at the Colosseum.

The ancient Roman amphitheatre is the only landmark with a deflationary effect – properties within a mile of the icon are more affordable than they are elsewhere in the Italian capital by a marginal 0.1 per cent.

All the other landmarks examined posted a positive impact on property prices, though these were less impressive in the bottom half of the table.

Proximity to the CN Tower in Toronto, Canada, and Prague Castle in the Czech Republic inflated property prices by a meagre 11 and 12 per cent, respectively. 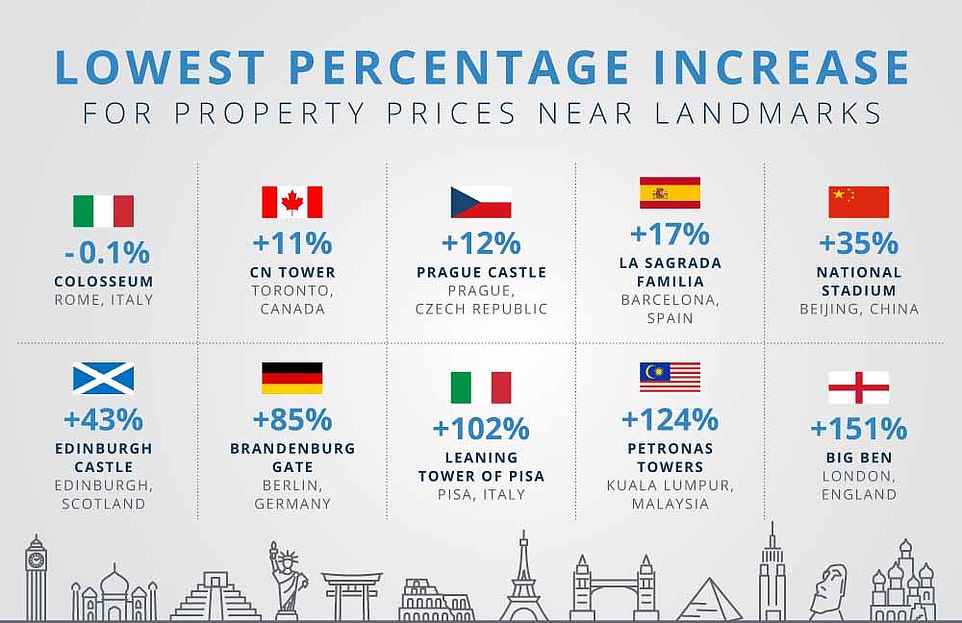 Could do better: All but one – Rome’s Colosseum – of the bottom ten landmarks assessed for impact on the local property market posted a positive impact though they ranged from 11 per cent (CN Tower, Toronto) to 151 per cent (Big Ben, London) 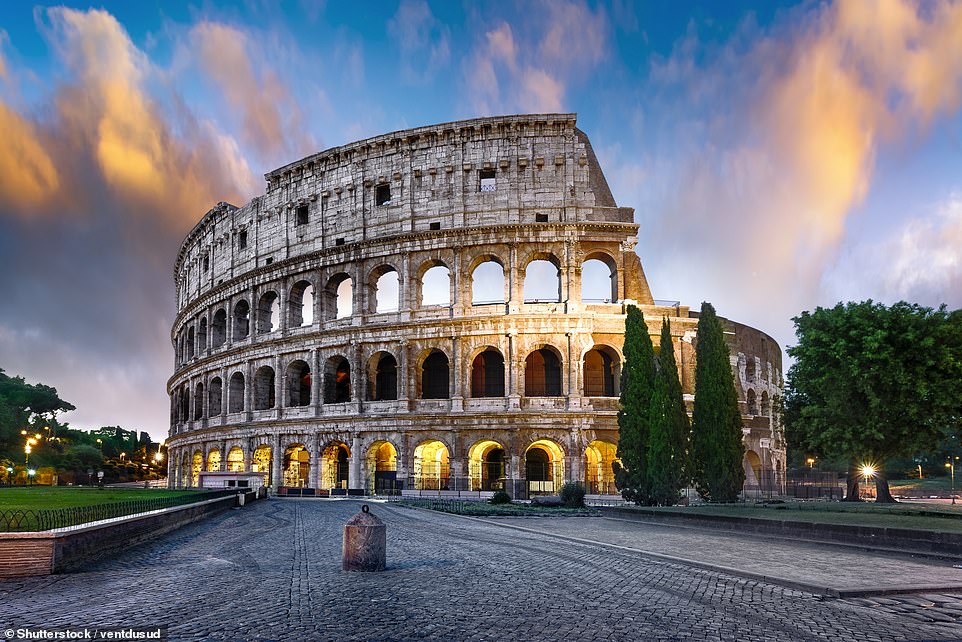 Thumbs down: Rome’s Colosseum (above) is a formidable symbol of the ancient world but it has a less than impressive impact than other landmarks on property prices which are marginally less – 0.1 per cent – within a mile radius of its circumference

Michael Wilson, Managing Director at Bolsover Cruise Club, which carried out the study, commented on the findings: ‘With so many tourists flooding to see these popular landmarks every year, we wanted to research just how much it would cost residents to purchase a property with a famous view.

‘We all might dream of living in the Hollywood Hills, or next to the Eiffel Tower, but it seems residents will have to fork out over £1million to do so! With tourists also documenting all their trips on social media, it was interesting to see that popular landmarks on Instagram don’t necessarily correlate to the most expensive to live by.

‘Cities themselves might be expensive, but our research shows it gets a whole lot more expensive on the doorstep of fame!’

Bolsover Cruise Club used data from Numbeo to calculate the inflationary effect of the top tourist draws upon property prices within a mile of their direct neighbourhoods. 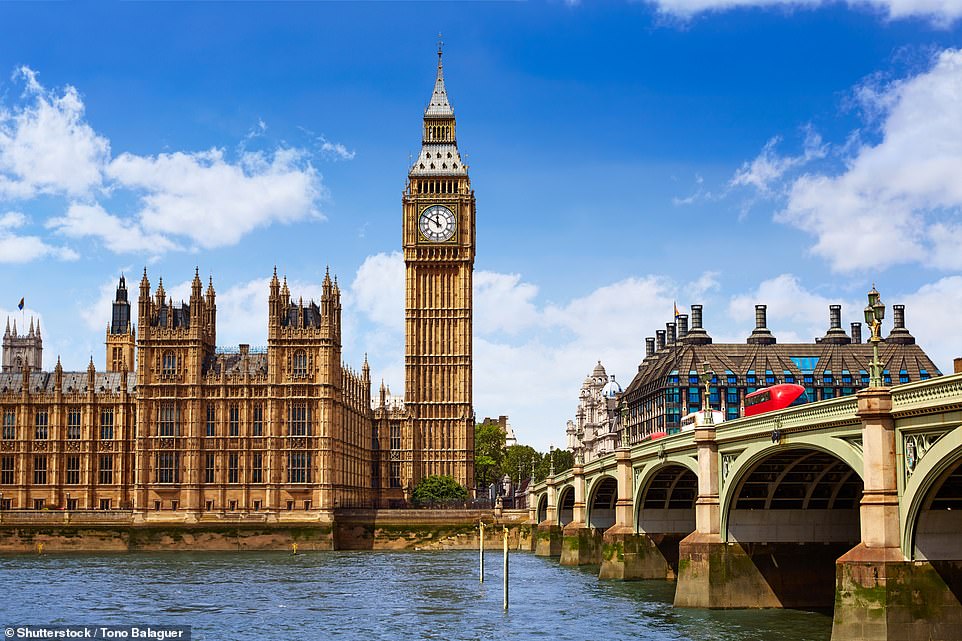 The Big Ben Theory: Proximity to London’s Houses of Parliament, incorporating St Stephen’s Tower (home of Big Ben), adds 151 per cent to the value of neighbouring property in spite of the occasional sound of the the bell clanging, research reveals 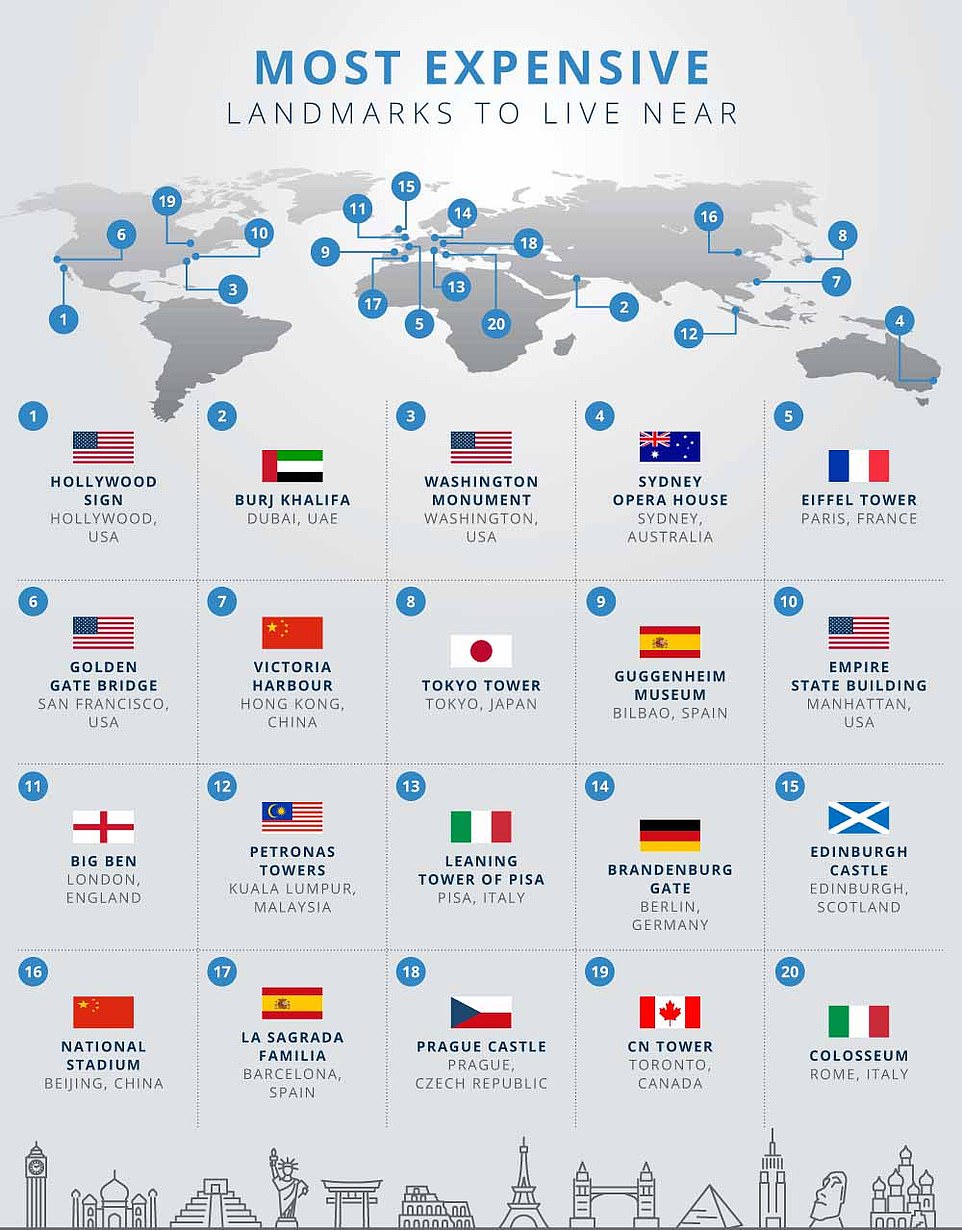 Where to buy: Four of the most inflationary landmarks in terms of property prices are found in the US, this chart illustrates

Mercury Retrogrades After Valentine’s Day 2020, So Don’t Commit Just Yet

Holidays 2020: Britons could visit these 45 hotspots as airlines beg for ‘air bridge’ plan