Britain at its best: The Malvern Hills are the best place to appreciate Elgar’s green and pleasant land

Where better to appreciate our green and pleasant land than from Worcestershire Beacon, at the crest of the Malvern Hills?

Zig-zag up the path that leads up the steep sides of this abrupt, fin-like outcrop of ancient rock, past bluebells and wild garlic, and — puffing slightly — you’ll be rewarded by one of the best views in England.

At 1,394ft above sea level, this is the highest point in the county. To one side lies a rich agricultural plain, fringed by the Cotswolds. The other way and you are looking towards the Black Mountains in Wales. 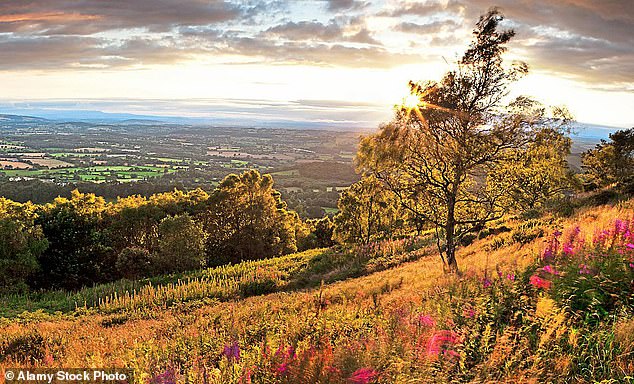 It is the sort of scene that inspired Sir Edward Elgar, born six miles away, at The Firs, Lower Broadheath (now owned by the National Trust); he is buried even closer, at St Wulstan’s Catholic Church, Little Malvern — both part of the signposted Elgar Route.

Six hundred years earlier, poet William Langland imagined himself by a bank on the ‘Malvern hulles’. But as he gazed into the waters of a brook, he fell asleep and dreamt The Vision Of Piers Plowman, one of the most famous poems of the 14th century.

The water that percolates through these hills, and emerges lower down, in numerous springs, is exceptionally pure. In the 18th century, Dr John Wall analysed the water from the Holy Well in Malvern Wells and declared it had medicinal properties — particularly good for the eyes.

In the 19th century, a Dr Grindrod began using a compressed air bath that could hold a dozen patients, providing ‘an invaluable treatment in complaints of the respiratory organs.’

A museum in the Priory Gatehouse at Great Malvern has more about the water cure. It left a legacy of rather gloomy Victorian hotels, one of which, The Imperial — now Malvern St James Girls’ School — was connected to the railway station by a covered passageway known as The Worm.

Now a listed building, it was designed with an easy slope so that infirm passengers could reach the hotel without using steps.

In 1850, Messrs Schweppes opened a bottling plant. (The Queen takes Malvern water with her wherever she travels.)

To help visitors explore the hills, a group of women in shawls and bonnets would hire donkeys. It is easy to imagine them wending their way up Happy Valley, described by a Victorian botanist as ‘a verdant park-like glacis’ that leads among the ‘exposed treeless turn, and rugged, jutting-out, lichened rocks’. 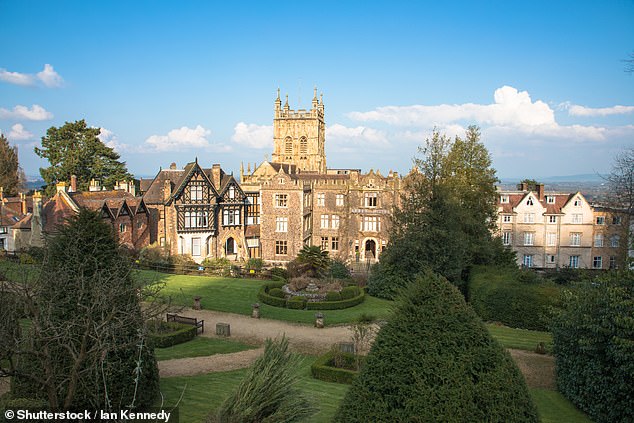 Today, this grassland forms part of a mosaic of habitats that includes scrub, heath and ancient woodland, which is full of wildlife. A pair of buzzards was on patrol when I reached Worcestershire Beacon, elegantly swooping for (as it seemed) the joy of it. This Area of Outstanding Natural Beauty is managed for harvest mice, stonechat, tree pipits, adders and grayling butterflies by the Malvern Hills Trust.

The glory of Great Malvern is the priory, begun in the Norman period — witness the stout circular columns in the nave — but rebuilt in the 15th century. When a monk called Aldwin came here from Worcester in the 1080s, it was a wilderness. But the presence of the priory encouraged a village to develop and prosper.

It has more medieval stained glass than any other parish church in England, with a Magnificat window, in honour of the Virgin Mary, given by Henry VII.

It’s a short drive, via a number of hairpin bends, to the Cottage in the Wood, a comfortable hotel serving good food, with walking trails that start from the door.

From a bedroom window that faced east, I looked out over the Three Counties Showground and leapt out of bed at first light.

Friendly local staff heaped me with information about things to see, including a leaflet about dykes dug in the reign of Charles I to mark the portion of the old hunting forest of Malvern Chase that the strap-cashed king was forced to sell.

To be honest, I didn’t see them — but I’m glad to have a reason to go back.

A double room with B&B at the Cottage in the Wood (cottageinthewood.co.uk) costs from £99.

Indian Weddings Are so Fun, People Are Paying to Crash Them