The magic and drama of England and Wales captured from above in a set of stunning drone photographs, from the Jurassic Coast to the Brecon Beacons via Stonehenge

He made aircraft wings – now he’s hoping to be a high-flying professional drone photographer.

Matthew Perks, from Bristol, used to build wings for hi-tech aircraft component manufacturer GKN Aerospace, but over the past three years discovered a love for drone photography. And that he has a knack for it – as these stunning photographs from his portfolio, taken in England and Wales, underscore.

Now Matthew is taking up photography full-time, a career that will surely take off. 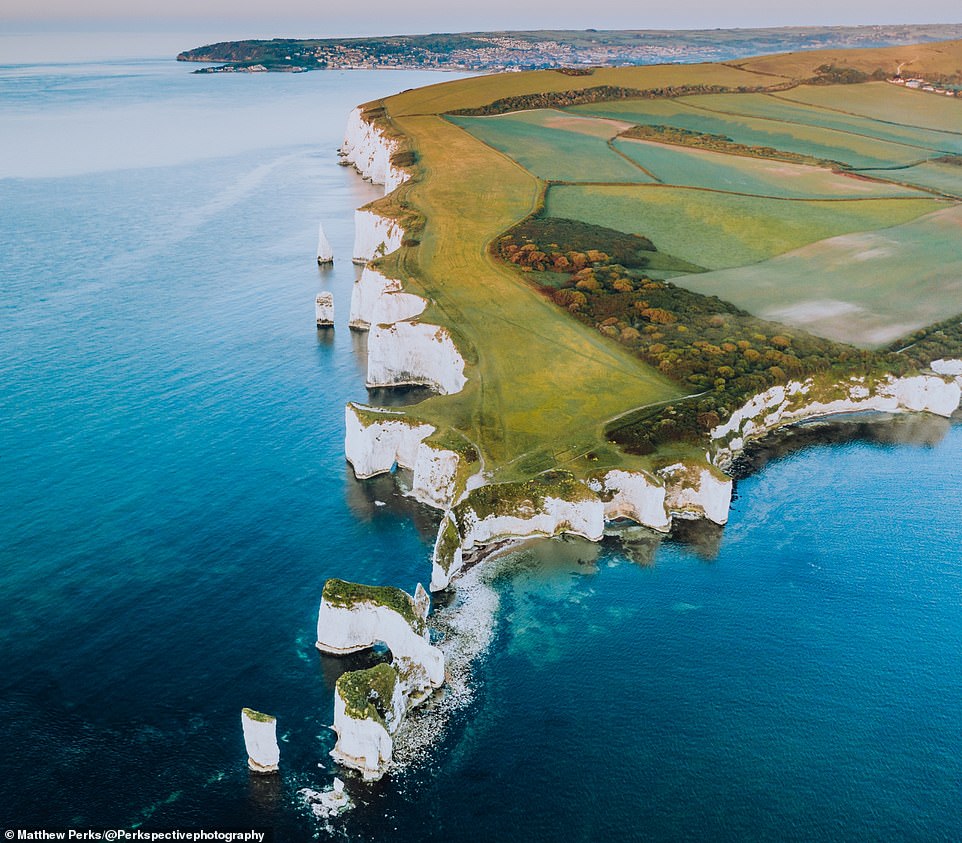 A stunning shot of the Old Harry Rocks chalk formations on the Isle of Purbeck peninsula in Dorset. This spot is on the eastern end of the Jurassic Coast World Heritage Site, which stretches 96 miles to Exmouth in the opposite direction 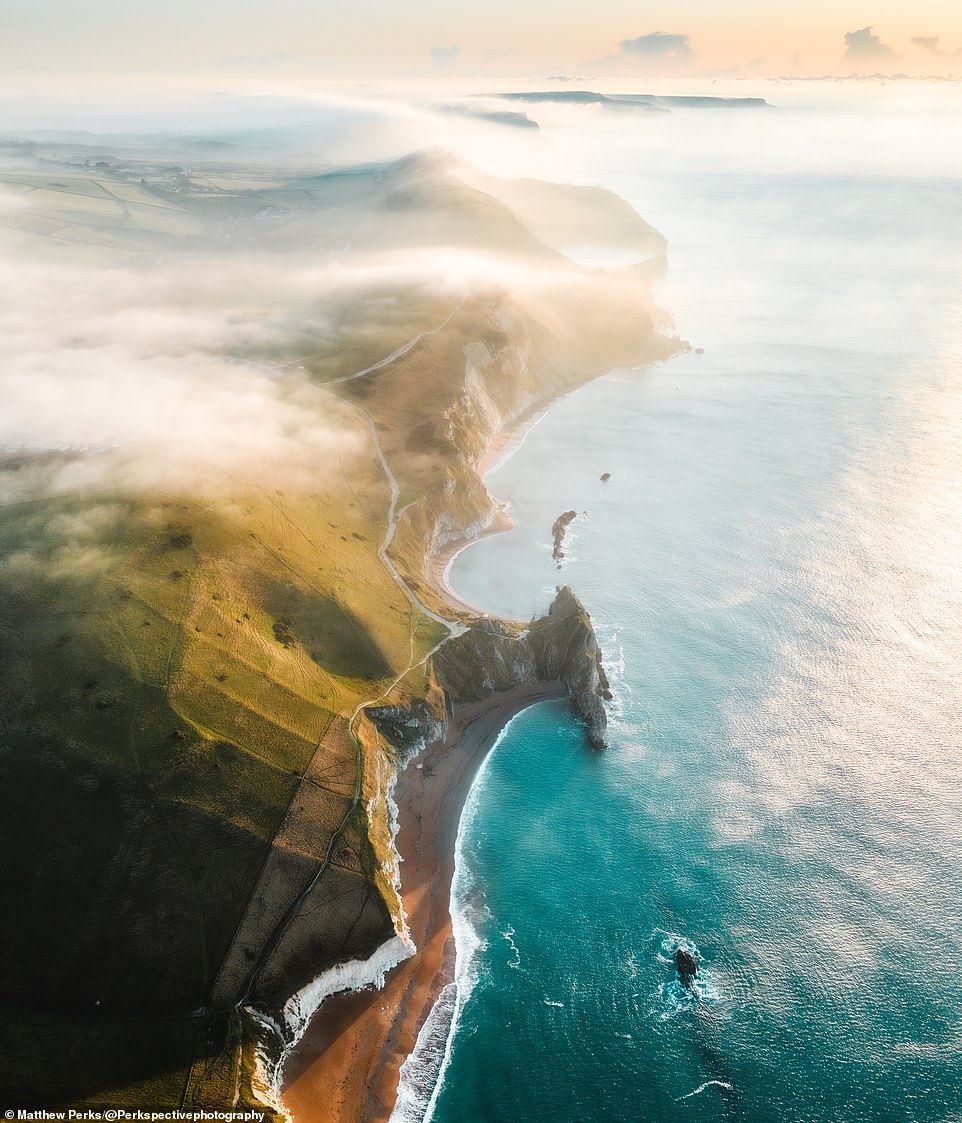 A mesmerising shot of a mist-enveloped Jurassic Coast near West Lulworth, with the mysterious natural arch known as Durdle Door in the foreground. This image has had nearly 700 likes on Matthew’s Instagram profile 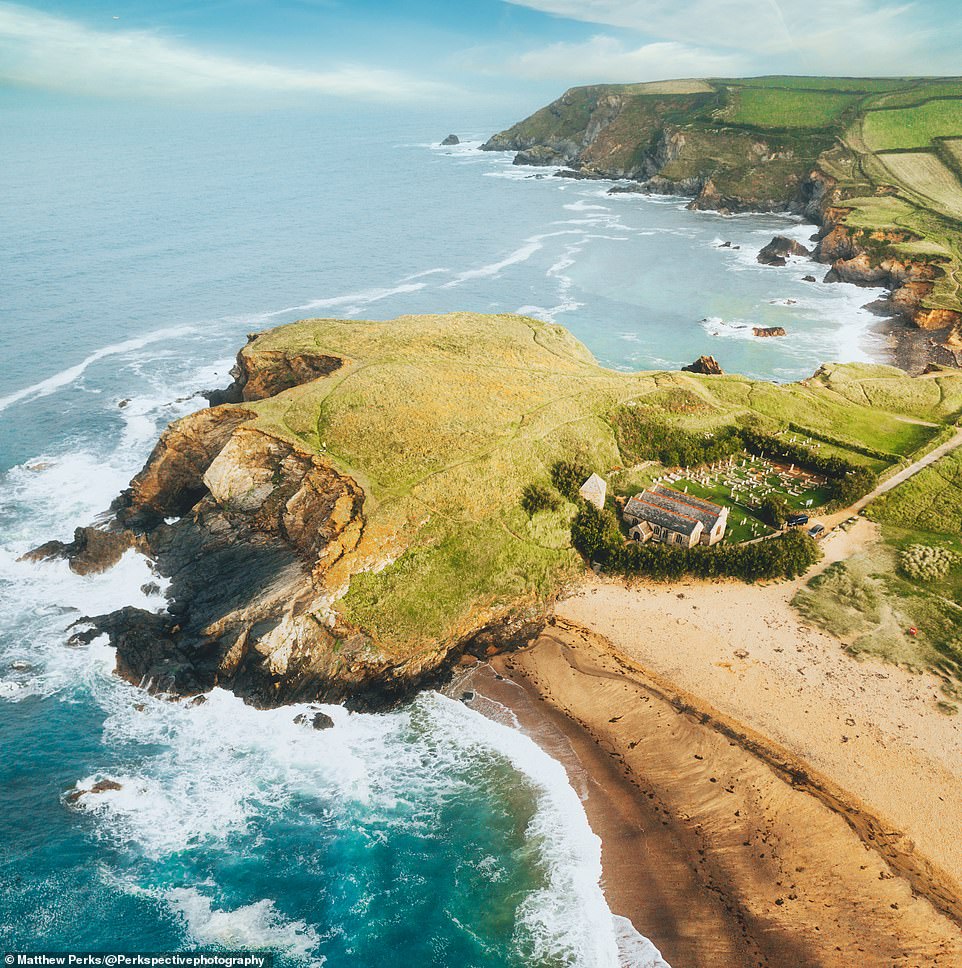 This amazing picture shows Cornwall’s enchanting Church Cove beach. It’s so-named because just above it lies the dinky church of St Winwaloe. The church’s bell tower is set into the headland rock to the left of the main building 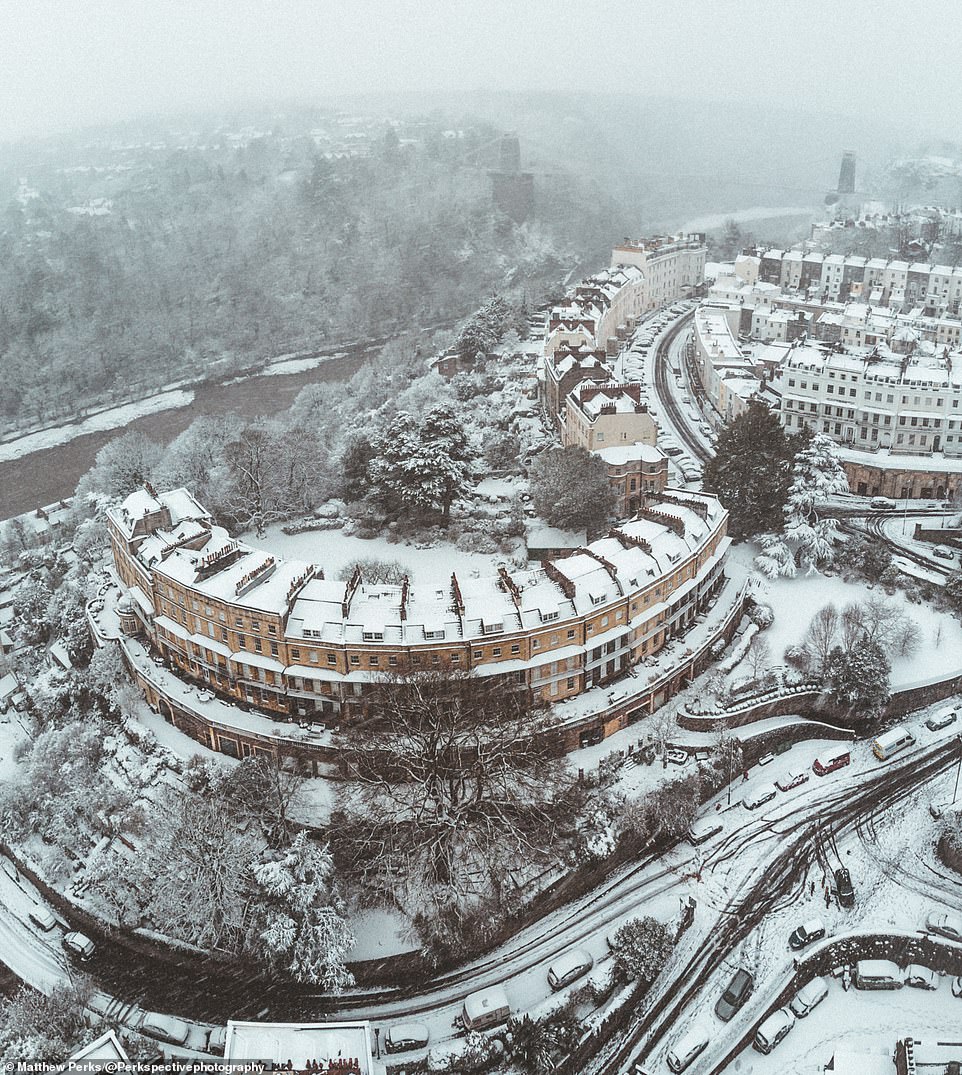 Matthew’s Instagram caption for this eye-catching image of Bristol explained that he used the garden of ‘kind couple Sarah and David’ as the base of operations. The Clifton Suspension Bridge can be seen lurking enigmatically in the background

The 30-year-old father of three – who has nearly 8,000 Instagram followers and was recently shortlisted in an Agora landscape photo competition – told MailOnline Travel: ‘I spent my days as a child taking things apart and discovering just how interesting life truly was. This fascination with being somewhat destructive turned into creativity.

‘My attention slowly turned to the mechanical world of engineering. My education years enabled me to secure a National Diploma in Manufacturing Engineering. It wasn’t long before I got myself a job working and building wings for GKN Aerospace.

‘After several years of focusing on work, my brother introduced me to the world of photography. I was immersed in the variability and workmanship involved. With a generous hand-me-down, a Sony A200, I was able to use my ingenuity to swiftly learn the process of composition and construction of an image.

‘I’ve saturated my brain with the world of photography. I like to think that I treat my photography as I treated my work. To build a wing means that every component is inspected and crafted to the highest possible standard.

‘I try to take this principle and adapt it to my photography. I have now decided I want to pursue a career as a photographer.

‘I know where I’d love to end up in my life, but that bit is not the important part. Meeting new people and enjoying the journey and the experiences are what matter to me.’ 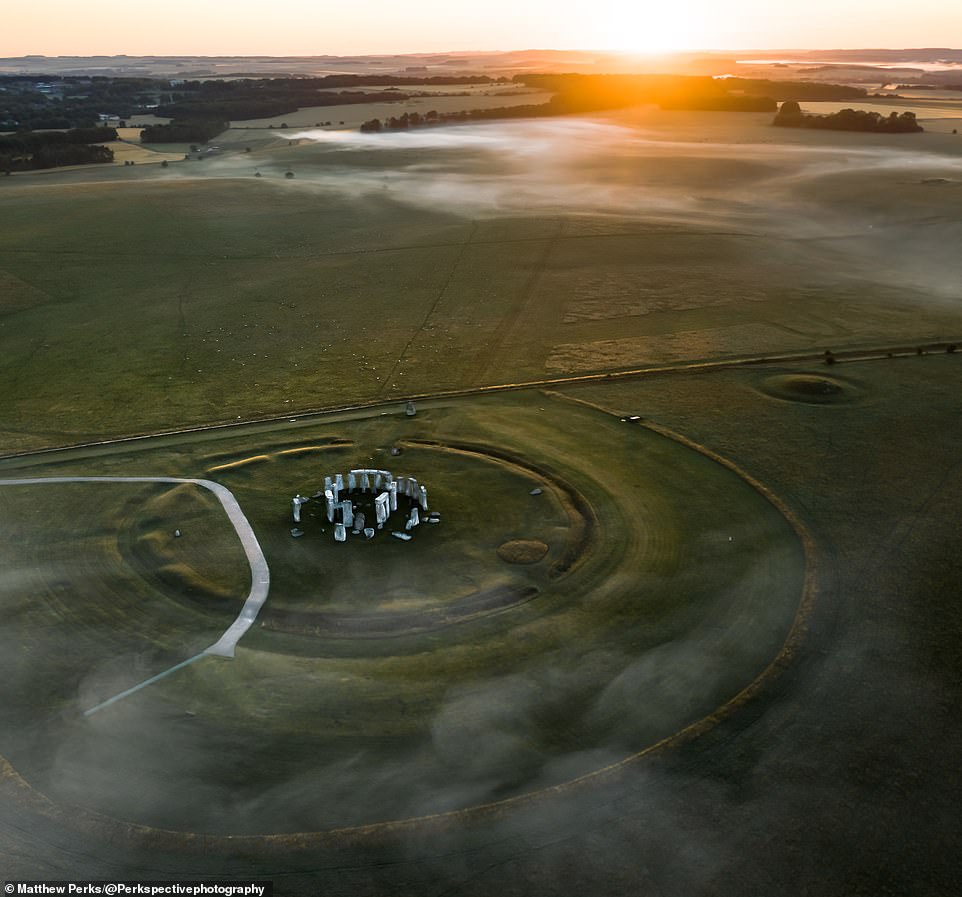 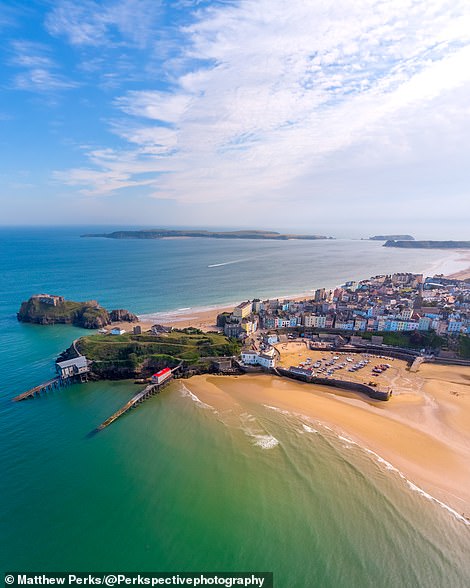 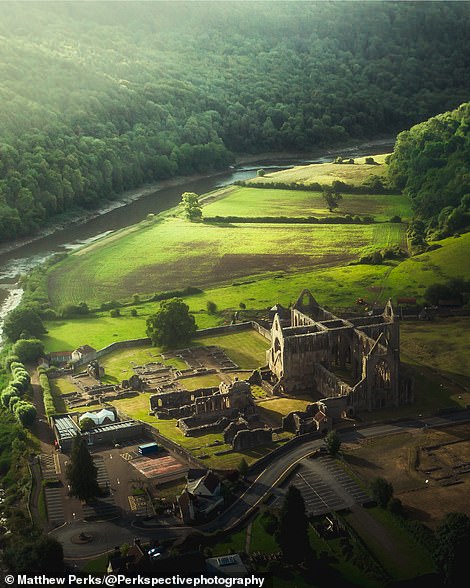 On the left is Tenby in Pembrokeshire. Instagram commenter ‘adragonsescape’ remarked: ‘Wow. You’ve captured Tenby perfectly! And you just want to jump into that water.’ On the right, Tintern Abbey – built in 1131, left in ruins by Henry VIII’s dissolution of the monasteries policy and captured in all its mystical glory in 2020 by Matthew Perks’ DJI Mavic Pro 2 drone 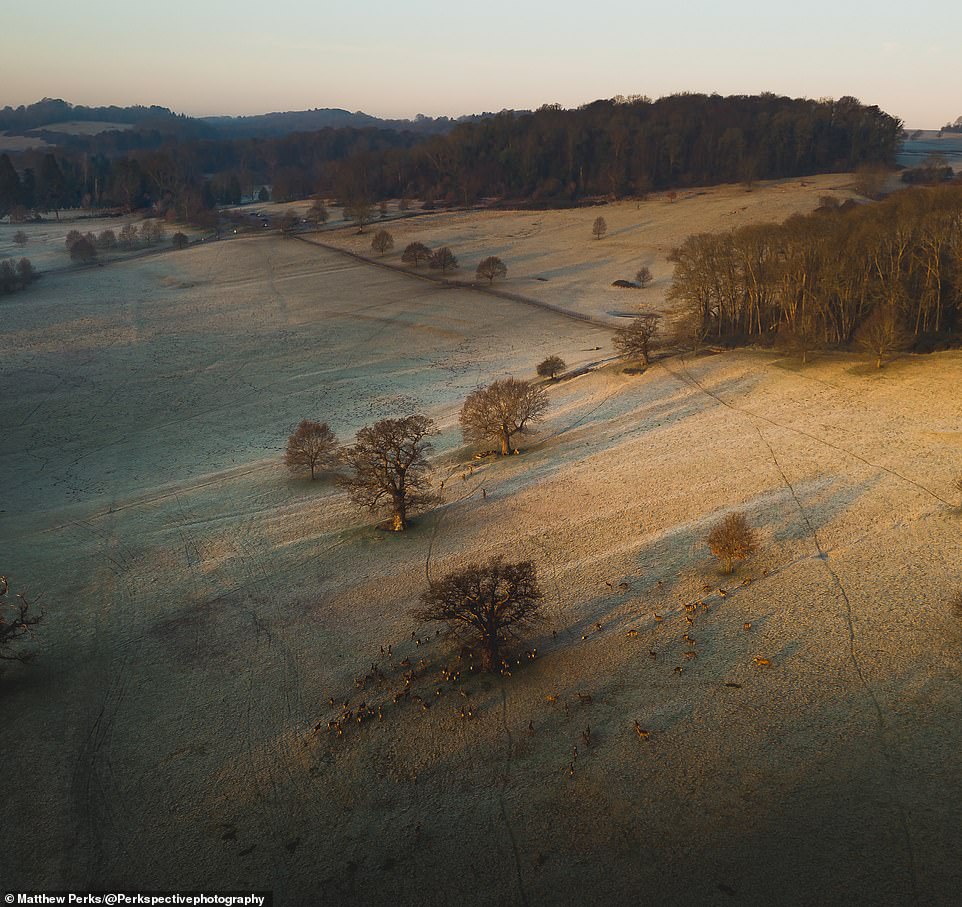 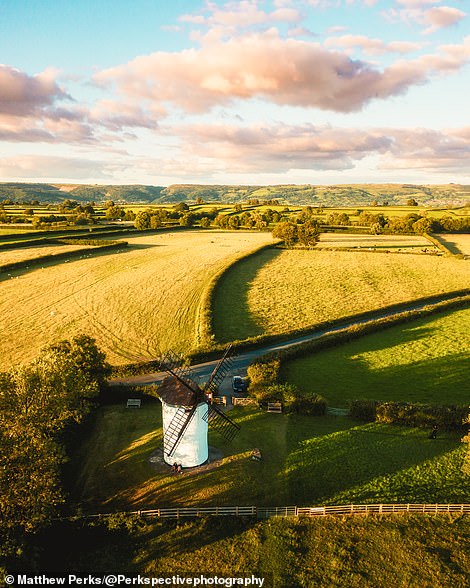 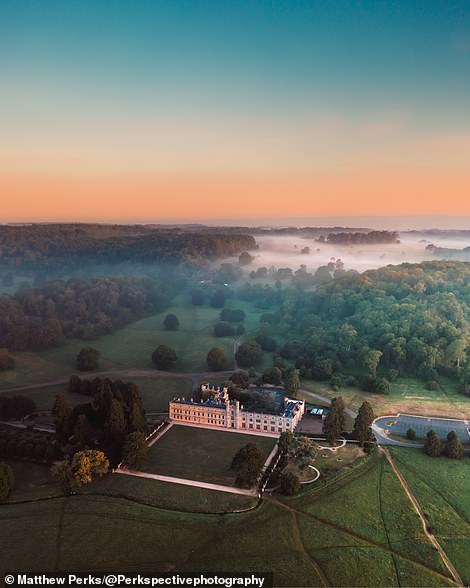 On the left is a captivating shot of the fairy-tale 18th-century Ashton Windmill, south-east of Weston-super-Mare between the villages of Stone Allerton and Wedmore. On the right is Ashton Court Estate looking its dignified best 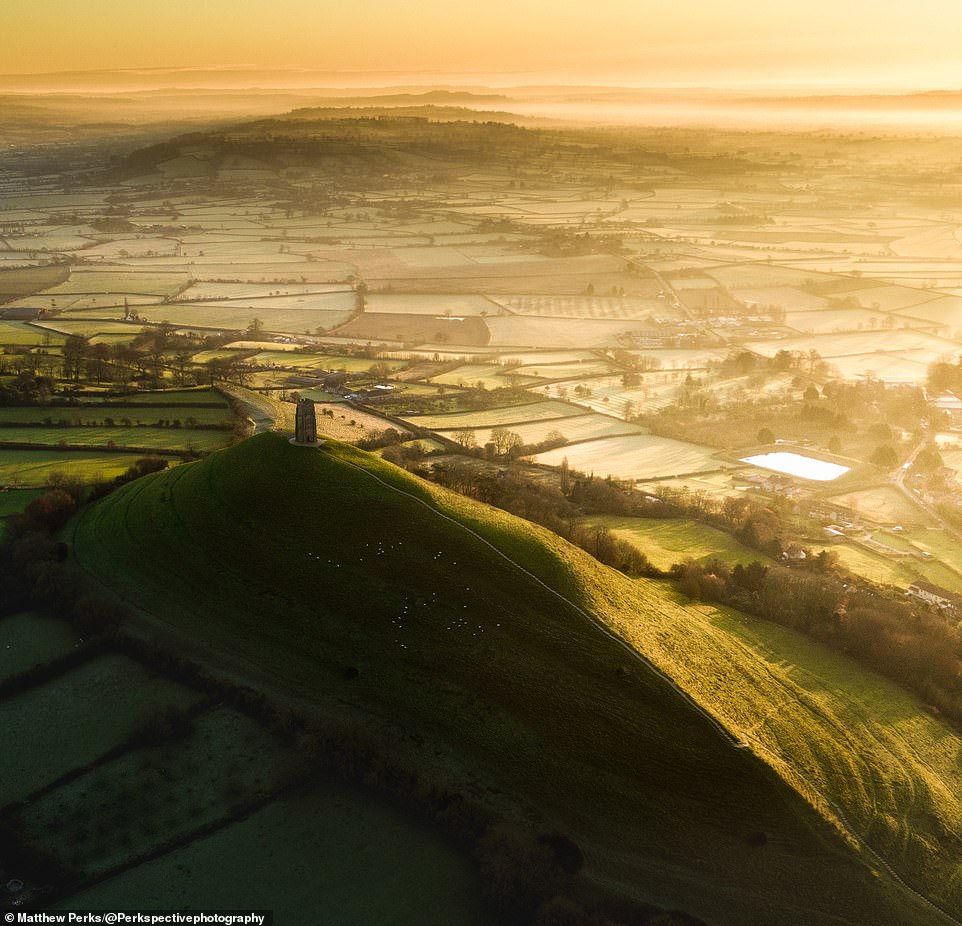 A stunning shot of the iconic Glastonbury Tor. It’s a hill, topped by St Michael’s Tower, around which mysteries and legends have swirled for centuries. It’s said that Jesus came here as a boy, that the fairy realm of Annwn lies beneath and that the Holy Grail was brought here by Jesus’s uncle, Joseph of Arimathea 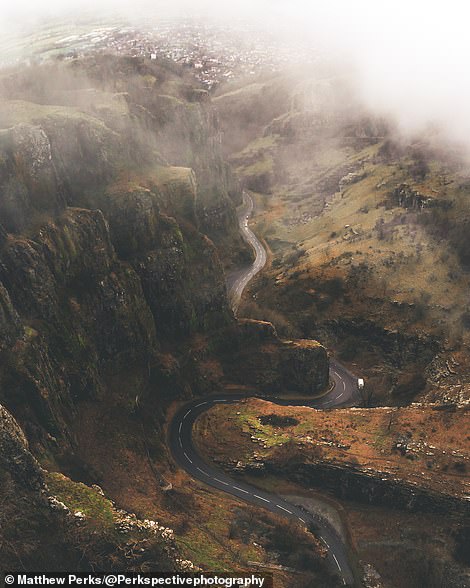 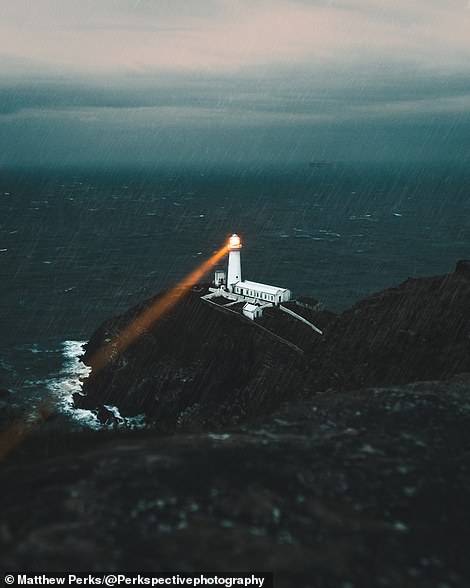 On the left is Somerset’s Cheddar Gorge, which at three miles in length and 449ft in depth is the most immense gorge in the UK. On the right, Matthew puts the aerial photo spotlight on Angelsey’s South Stack Lighthouse, one of five still working on the picturesque Welsh island

One of Matthew’s favourite experiences in Britain is visiting North Wales and Snowdonia National Park.

He said: ‘With so much rugged terrain, being within arm’s reach of the coast, and containing rich historic tales, I always leave feeling like I’ve regained a part of me that is lost whenever I’m caught up in the rat race.’

Matthew revealed that he’s yet to be disappointed by a shoot location – but that’s because he carefully researches where he’s going to train his lens.

He said: ‘I’ve never been disappointed at a location I’ve visited. Sure, there are some elements to visiting places that can cause frustration. For example, overpopulated areas through to bad weather. But on the flip side, I now do a lot of planning and research on locations to ensure that I eliminate all these possibilities and can fully enjoy any travelling experience.’ 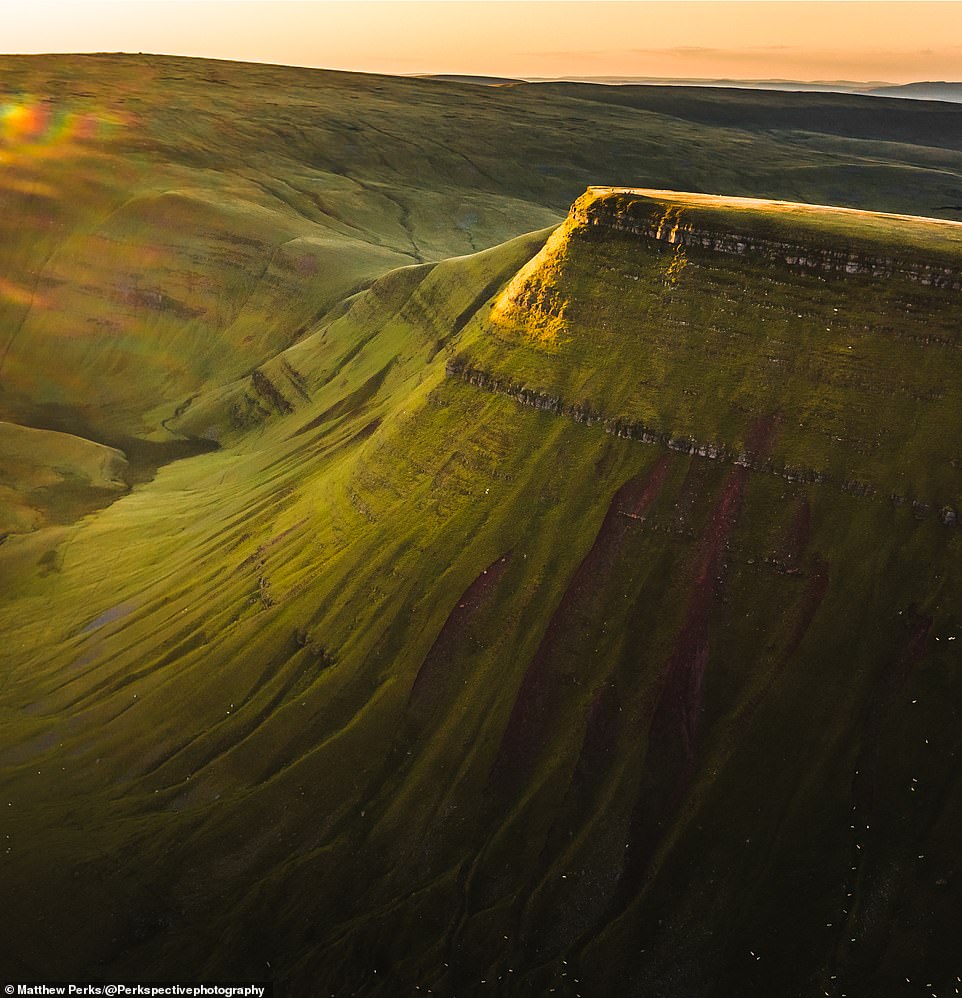 The epic 2,457ft-tall Picws Du mountain in Carmarthenshire, which towers over the picturesque Llyn y Fan Fach lake 800 feet below (just out of shot here) 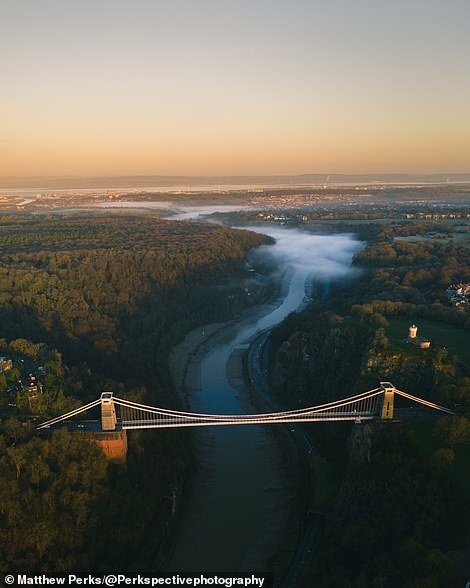 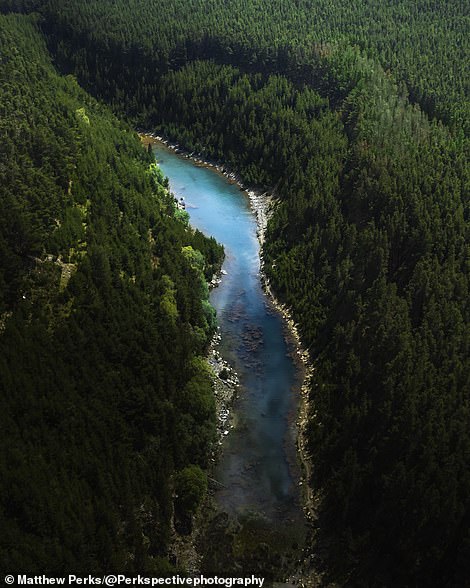 On the left, the River Avon snakes its way beneath the Clifton Suspension Bridge. On the right is stunning, tropical-esque Bleauncuffin Canyon, which is on privately owned land between Pontypool and Abertillery in Wales 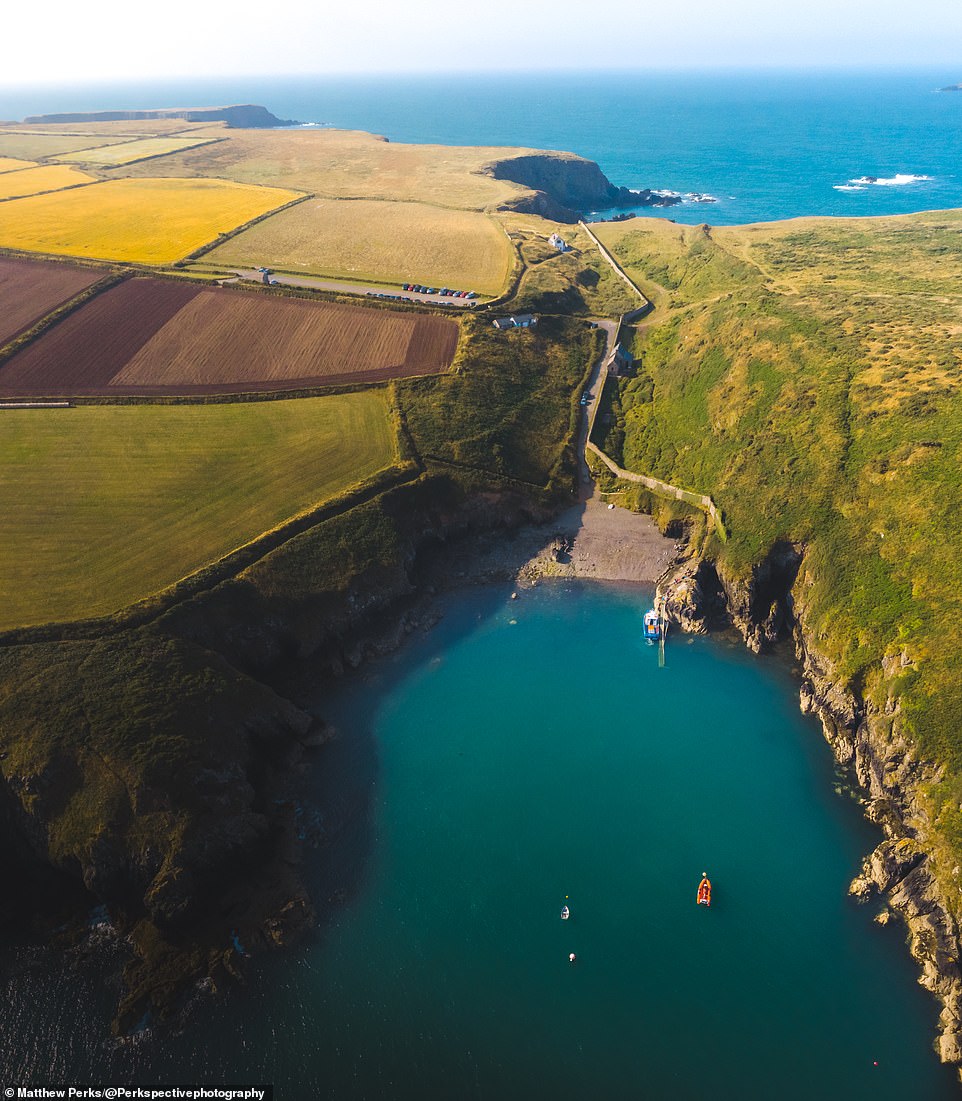 The eye-catching Martin’s Haven bay in Pembrokeshire. Ferries depart from here for the island of Skomer, which is home to a cornucopia of wildlife including voles, owls and puffins 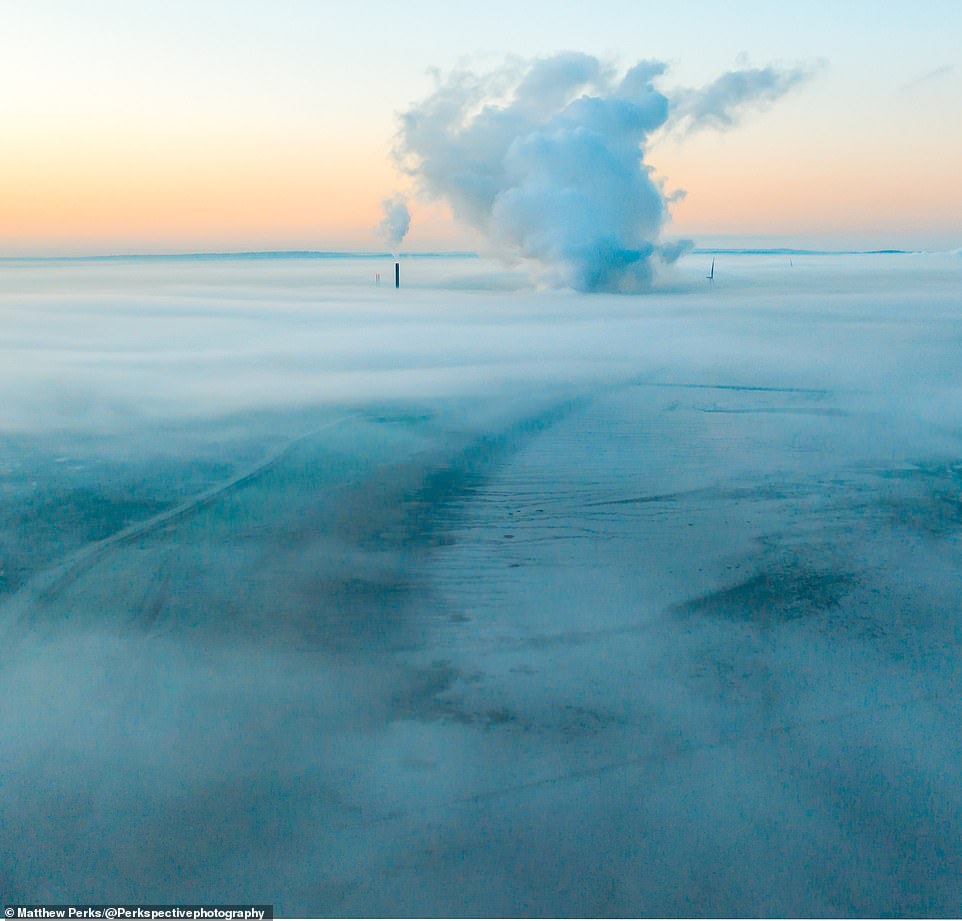 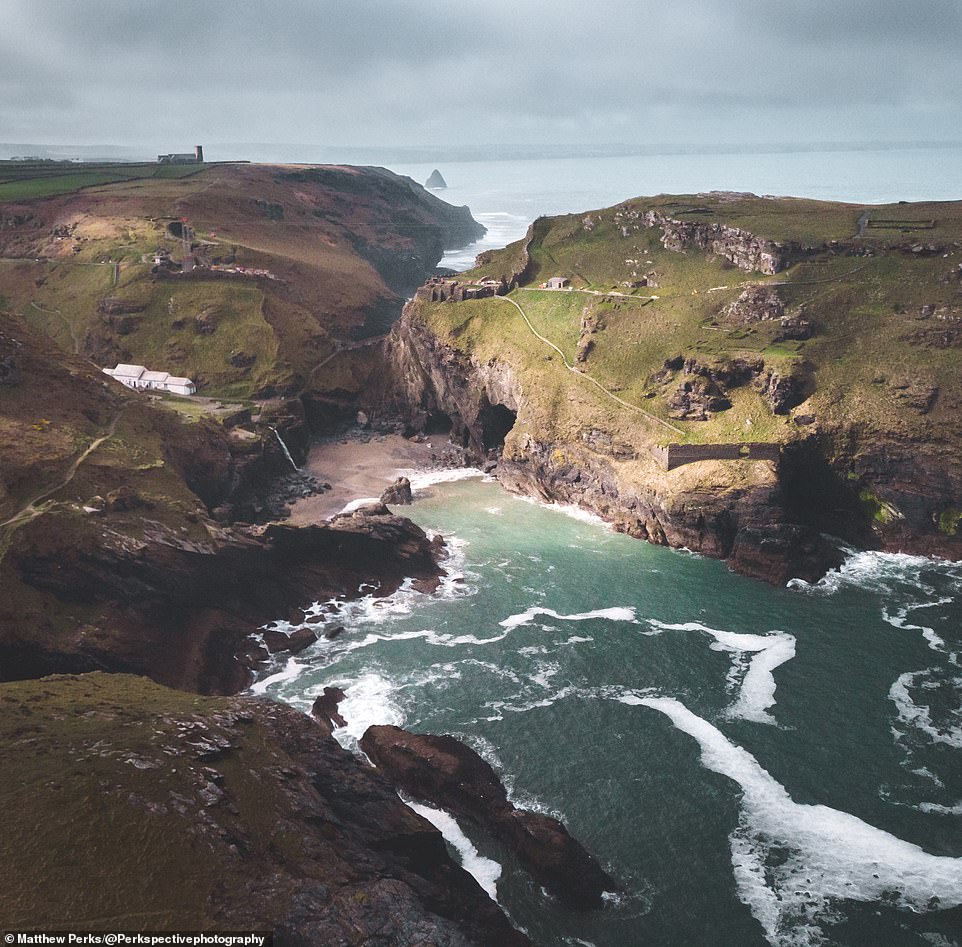 The Holy Grail of drone shots: The enigmatic Tintagel Castle, said to be the birthplace of King Arthur

Research is also key, Matthew said, to making sure there are no drone flying restrictions – and that the weather is looking good.

And don’t fly when the battery is flat, he added, as losing the drone isn’t part of the game plan.

Matthew would love his next foreign trip to be to Switzerland – ‘going there has been a dream for many years’ – but while travel restrictions remain in place, he is enjoying the UK’s ‘stunning’ locations.

‘There’s certainly no shortage,‘ he said. 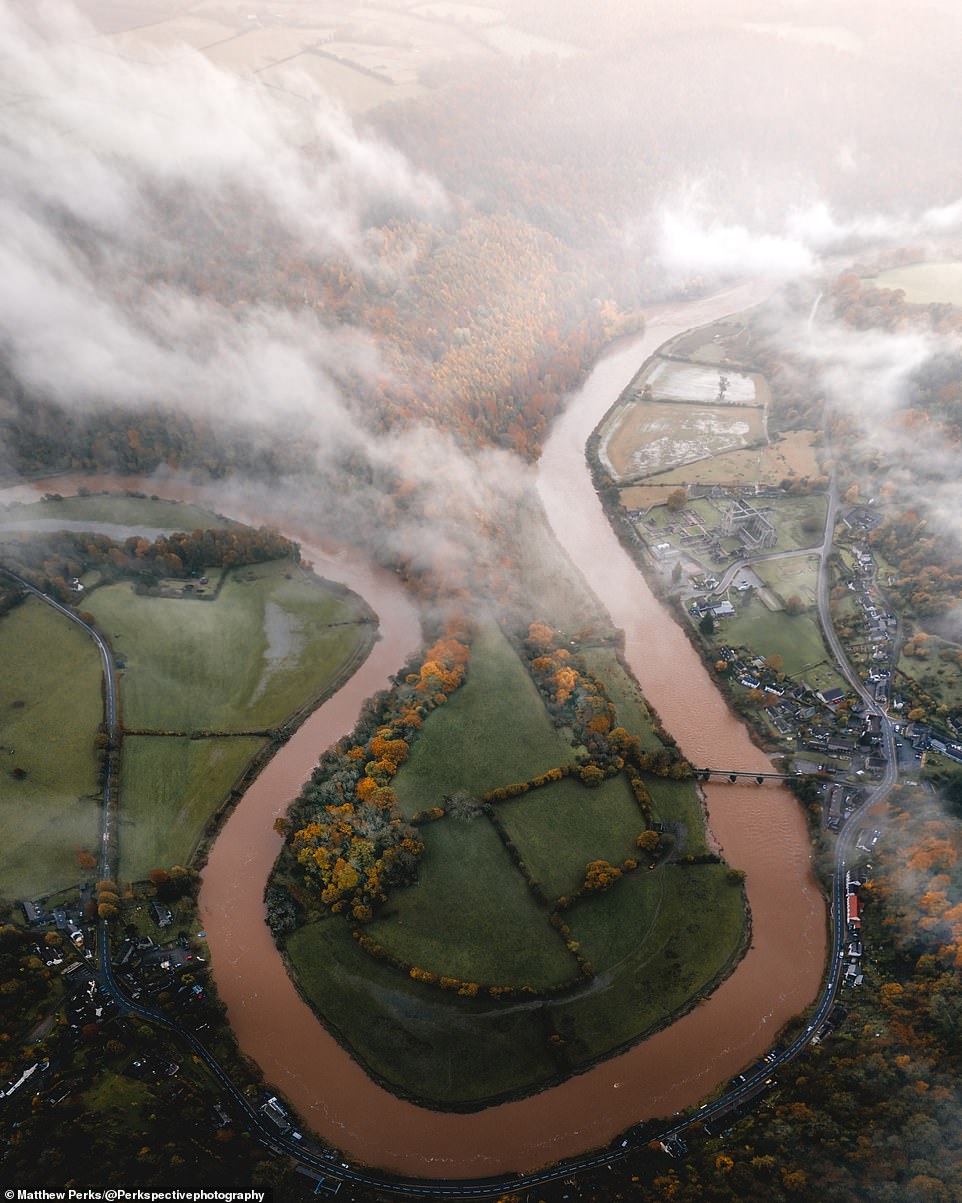 A dramatic horseshoe bend in the River Wye near Tintern Abbey, which can be seen towards the top right of the image

The Oldest Bar in Every State

How travel is levelling the playing field for women #IWD