Home » Travel » The luxury of discovering people through food

CAPE TOWN, South Africa — Travel today is increasingly focused on really getting to know the locals and their culture. And what better way than combining it with one of travel’s other hot trends: food.

I learned more about South Africa’s complicated segregated and colonial history during a cooking class in the home of a renowned local chef, Cass Abrahams, than I did in my entire visit to the country three years ago.

Abrahams, considered the doyenne of Cape Malay cooking, not only taught us how to make bobotie — the national food of South Africa that for decades was ignored by the white elite — but also the history of how the people prepared the dish.

Abrahams, who is in her 70s, says, “Food can teach you about the history, geography and economy of a country.”

For instance, the word “Malay” in Cape Malay cuisine has nothing to with Malaysia. Rather it was developed in Dutch kitchens by Indonesian slaves. Her stories weaved in the history of the diverse people that settled in this town, a key trading port before the Suez Canal was built.

But what made this different from most cooking classes I have taken on my travels were the personal stories of segregation between the many different ethnicities and skin colors that define South African society, not just during apartheid but long before.

The child of biracial parents, she recalled the family getting calls from her mom and dad saying they would not be home that night because they had been arrested for being together. It would take until morning, she said, for them to prove they were married before South Africa had banned interracial marriages.

She also talked of having to get a permit to visit white friends for dinner during college and of being told by her mother to pull up her hand-crocheted stockings “because the white people are looking at you.”

A Muslim after converting for marriage, Abrahams is credited with fighting to get Cape Malay food recognized.

Before, she said, it was considered the kind of dish the “coloreds” ate at home, not a dish you would serve to company, she said. 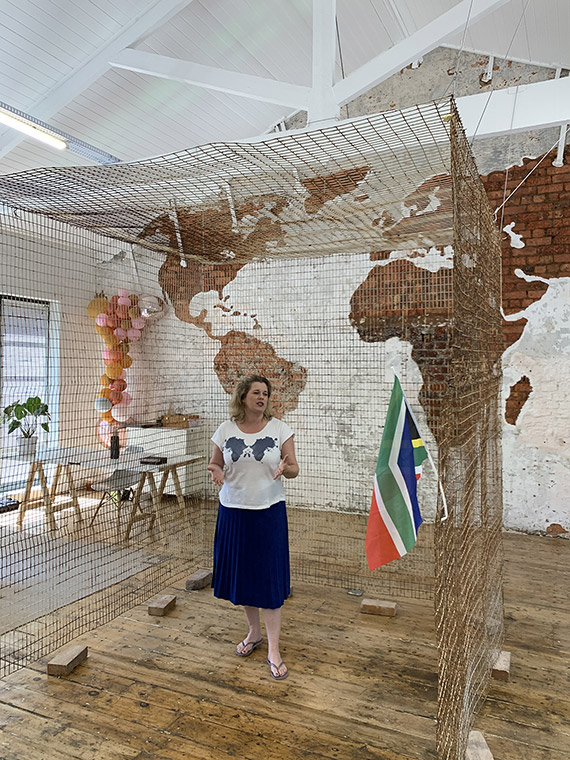 Our immersive education of Cape Town’s history through the eyes of its people, sponsored by African Travel, continued with a private tour of Robben Island with Christo Brand, a white South African man who was one of Nelson Mandela’s jailers. The two became close friends, and Brand ended up eventually working for Mandela after he became the country’s first black president.

We learned more about the country’s past and present with private visits to local galleries and with artists who are telling South Africa’s story through their work; a tour at Ellerman House, a boutique hotel with one of the country’s most extensive art collections; walks through the city’s famed Victoria & Albert Waterfront as well as more recently gentrifying areas such as Woodstock, Gardens and Zonnebloem known for its coffee shops, natural food stores, restaurants and speakeasies that give this city a cosmopolitan vibe.

Perhaps most fascinating is that a society that has seen so much discrimination is so welcoming to visitors, and that those discriminated against — as well those who played a role in the discriminating — are relaying their deeply personal stories.

Cape Town became one of my favorite cities after my first visit in 2017. Add in interaction with its friendly people, and it’s a must-see.

ASTA urging agents to fight for IC exemption in California

Singapore: Travelling with this banned food item in your luggage could see Britons FINED