Take Norway to the Caribbean: Revelling in a cruise that mixes sunshine, hummingbirds and a Viking vibe

Our rum punch comes with a warning,’ the conductor told us solemnly, as he passed round the bright pink drinks. ‘After three you’ll be seeing double but feeling single.’

With generous top-ups of this potent thirst-quencher, the volume rose on the double-decker train rattling past the ruins of sugar mills and along the coast of St Kitts.

The sugar-cane industry was abandoned on St Kitts in 2005, but the last railway in the West Indies trundles on – no longer carrying a cargo of crops to the mills and port, but transporting tourists on journeys through colourful villages and overgrown plantations, past black-sand beaches and a looming but long-dormant volcano, Mount Liamuiga. 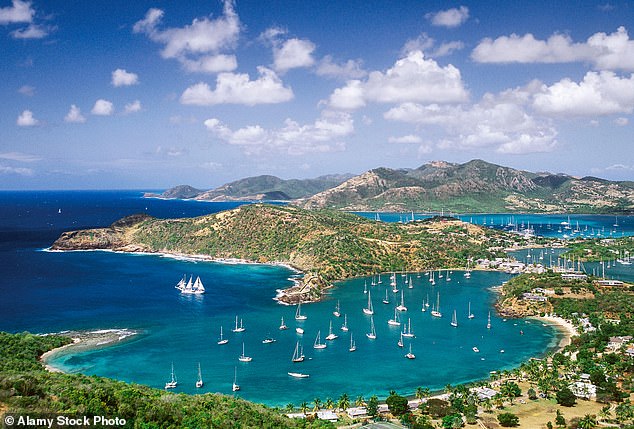 Safe haven: Antigua’s English Harbour. It includes Nelson’s Dockyard, which is named after the hero of the Battle of Trafalgar, whose earlier career included commanding the Royal Navy in Antigua

From the open-sided top deck, I could see sister island Nevis, and made out the misty outlines of St Barts, St Martin and Sint Eustatius.

On an 11-day cruise aboard Viking Sea, island-hopping from Puerto Rico down to Barbados and back, every day brought new adventures ashore.

Viking, a Norwegian family-owned cruise line, is best known for its fleet of ‘longships’ that sail the world’s rivers.

And the company’s six adults-only ocean ships have many features that are taken for granted on river cruises but are unusual at sea. So, as well as free-flowing wine at meals and unlimited wi-fi, an excursion at every port is included in the fare.

On a walking tour of the Old Town of Puerto Rico’s capital, San Juan, we paused to pay our respects outside Barrachina, the restaurant where the pina colada was born in 1963.

And at a tiny kiosk nearby, I had my first ‘limber’, a plastic cup of frozen coconut milk, named in honour of Charles Lindbergh, the aviator who touched down here in his monoplane, Spirit of St Louis, in 1928. 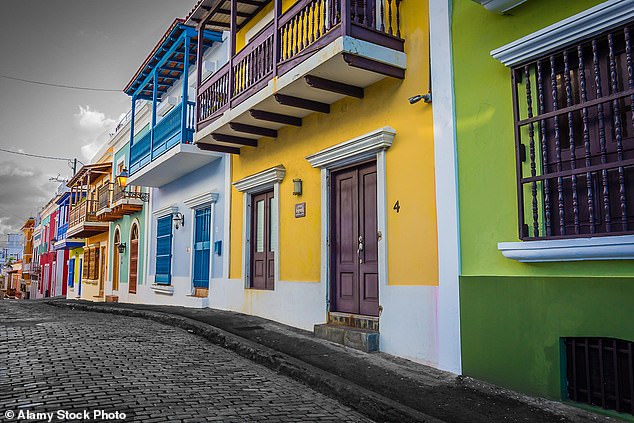 The colourful streets of San Juan in Puerto Rico. Here you can visit the restaurant where the pina colado was born

On Antigua, the half-day tour started with a coach trip up to Shirley Heights Lookout, on the top of a 450ft cliff. Once Britain’s main fort guarding its colonies in the Caribbean, it is now a wonderful spot for views.

Below, in English Harbour, Nelson’s Dockyard is named after the hero of the Battle of Trafalgar whose earlier career included commanding the Royal Navy in Antigua for three years in the 1780s. It is the only remaining Georgian dockyard in use today.

On Barbados, two interesting excursions are offered at extra cost, as alternatives to the free coach tour around the island and into Bridge-town. You can learn how to get the best shots of the coast, countryside and village life with an award-winning Barbadian photographer on a small group tour.

Or, find out how Jewish refugees from Brazil in the 17th Century built up the sugar industry on Barbados, helping the island become a major producer of rum, on a tour of St Nicholas Abbey, a Jacobean great house with its own working distillery. 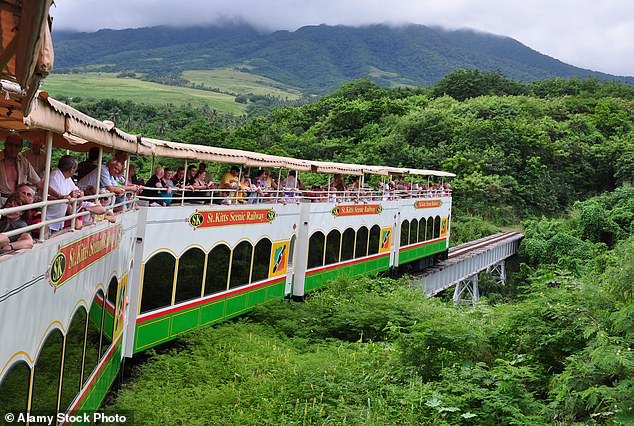 The railway in St Kitts, which no longer carries a cargo of crops to the mills and port, but transports tourists on journeys through colourful villages and overgrown plantations

Coming down to earth, I joined a walk at ground level. It was a magical experience, with hummingbirds hovering to sip from flowers four times their size as we walked through thick forest with vast hanging vines.

After exertions in the tropical heat ashore, returning to Viking Sea was a joy. The two-deck-high atrium felt like the heart and lungs of the ship, and the place to be at 6pm for Munch Moments, when a string quartet plays pieces by Edvard Grieg while works by Edvard Munch are projected on to a giant screen.

A calm and understated atmosphere pervades throughout the ship, from the Explorers’ Lounge, lined with books, to the Winter Garden and the infinity pool lapping a solid glass wall on the Aquavit Terrace.

A cool Scandinavian vibe on board might seem an odd combination with the lively beat of the sunny Caribbean, but it is one that works so well.

Pilot explains what really happens in the cockpit during flights