Like cruises but hate the idea of a mega-ship trip? Then try a voyage on a ’boutique’ vessel – where there are no queues and the crew all know your name

For those tempted by a cruise with their family but who flinch at the idea of mega ships, water slides, racetracks and thousands of fellow guests, the solution is quite simple. Try something smaller – a boutique ship. Our last family holiday was on an Adriatic cruise from Monte Carlo to Venice over 11 nights on Regent Seven Seas ship Voyager.

The cruise line has four medium luxury ships – Voyager, Mariner, Explorer and the recently launched Splendor. The average passenger count is 750 and its one small ship, Navigator, takes only 490 guests. Expect intimacy, attention to detail and the feeling, after a short time, that you’ve seen all your fellow travellers at least once.

The smaller passenger load and a ratio of two crew to every three guests, means no lining up, no congestion, guaranteed poolside space (although it’s worth bagging a recliner early if you prefer the shade) and personal greetings from staff (‘Good morning Mr Turner!). Waiters quickly learn your preferences, as well as your allergies. 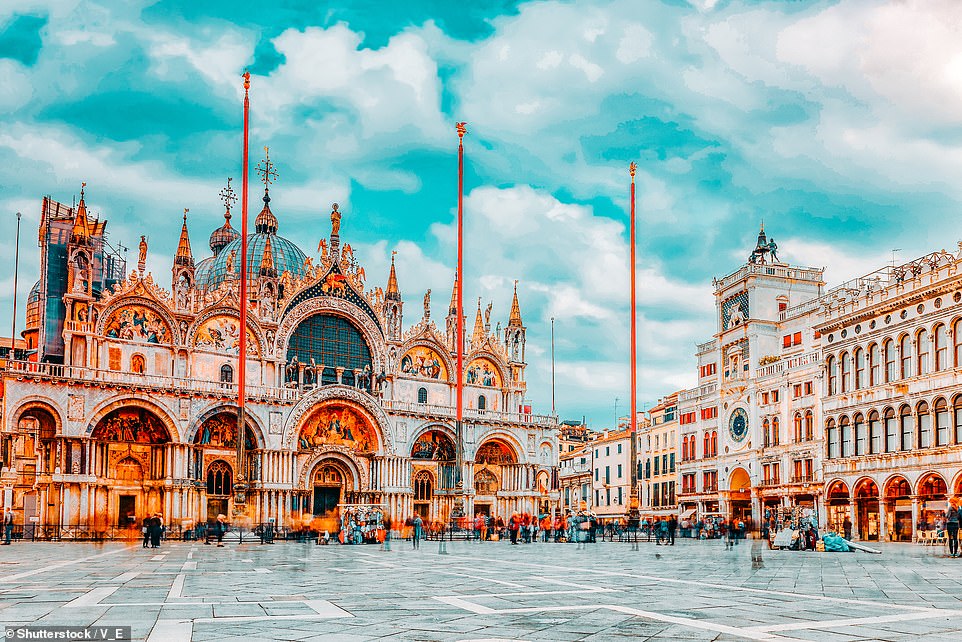 We visited Barcelona’s La Sagrada Familia, Rome’s Colosseum, the Parthenon in Athens, Pompeii in southern Italy, Diocletian’s Palace in Split, Croatia; Slovenia’s Lake Bled, and Piazza San Marco in Venice all in one trip. Plus, we enjoyed five-star hotel service, ate like kings, had to unpack only once and capped each day with a theatre show followed by live music in the lounge bar.

My advice is to pick a cruise that fits your needs. The Mediterranean is great if you like the sailing to happen while you’re asleep, waking up in a different country every morning. If you prefer several uninterrupted days at sea with the wind blowing through your hair, look at itineraries off the coasts of Africa and Asia or even transatlantic crossings.

Book up shore excursions and fine-dining restaurant tables long before departure. Flights, transfers, food, drink and entertainment are all included in the price of a Regent cruise. The majority of the excursions also come free, although some of the longer trips will cost. There’s no tipping on board.

Start your day at La Veranda on deck 11 where there’s a bounteous buffet of fresh fruits, cereals and breads, or a cooked breakfast brought by a waiter. Arrive early to get a prized outdoor table at the ship’s stern. One of the great delights of cruising is to eat in the early-morning sunlight while overlooking a splendid Mediterranean port such as Dubrovnik or Kotor. 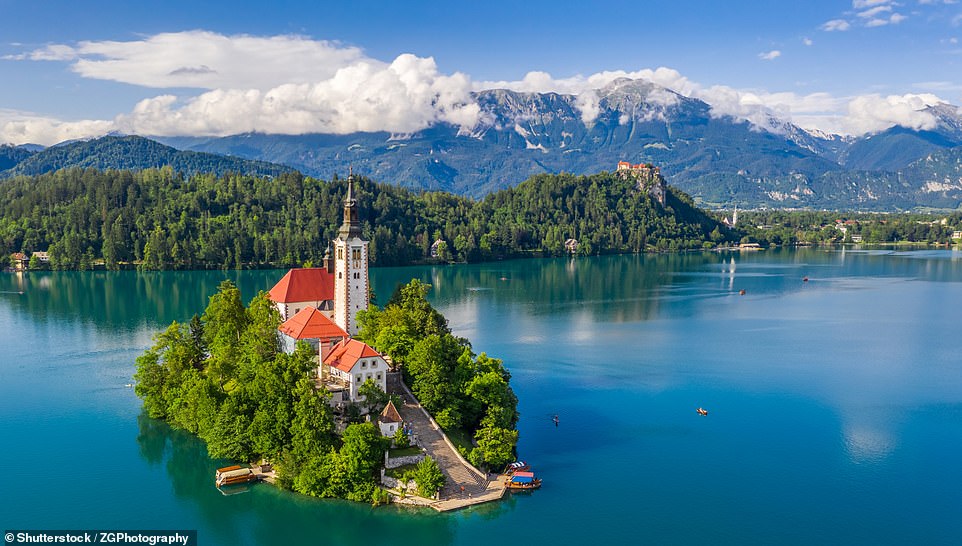 Turner says: ‘My advice is to pick a cruise that fits your needs. The Mediterranean is great if you like the sailing to happen while you’re asleep, waking up in a different country every morning.’ Pictured, the Church of the Assumption of Mary on Slovenia’s Lake Bled, which was one of the ports of call 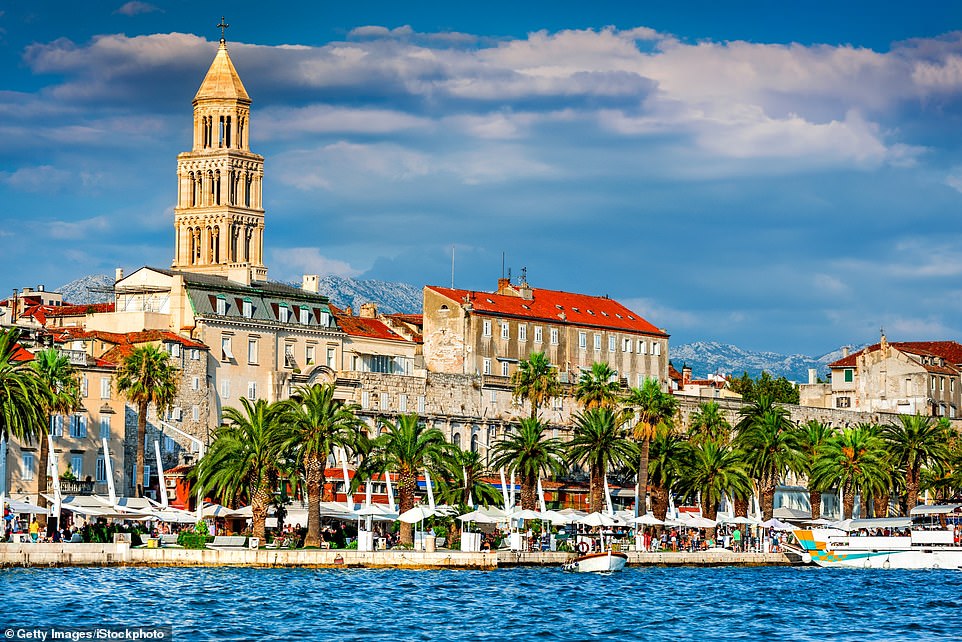 Coastal gem: Split in Croatia is home to the grand Diocletian’s Palace. It is one of many highlights on the Regent Seven Seas Adriatic cruise

I recommend taking your excursion tickets to breakfast because tours begin departing from around 8am on one of the lower decks. On each coach there’ll be a Regent crew member and a local tour guide who’ll give a running commentary in English.

Regent guests are generally well-travelled and have experienced other competitive luxury lines. They expect the best and are hungry for new experiences. Many will choose a cruise itinerary because it includes a less-visited port or a new tour. Smaller ships can drop anchor in shallower waters and can therefore visit ports inaccessible to the floating behemoths.

Walking tours of cities are great for getting your bearings but why not choose a ‘go local’ excursion to immerse yourself in local culture? On a Regent cruise you could hunt truffles in the Provencal countryside (Marseille, France), take a cooking class in the walled city of Lucca (Livorno, Italy) or travel by speedboat on a mussel-tasting tour (Kotor, Montenegro).

Return to the ship and have a leisurely lunch by the pool before sunbathing or taking room service on your veranda (all suites have a balcony). 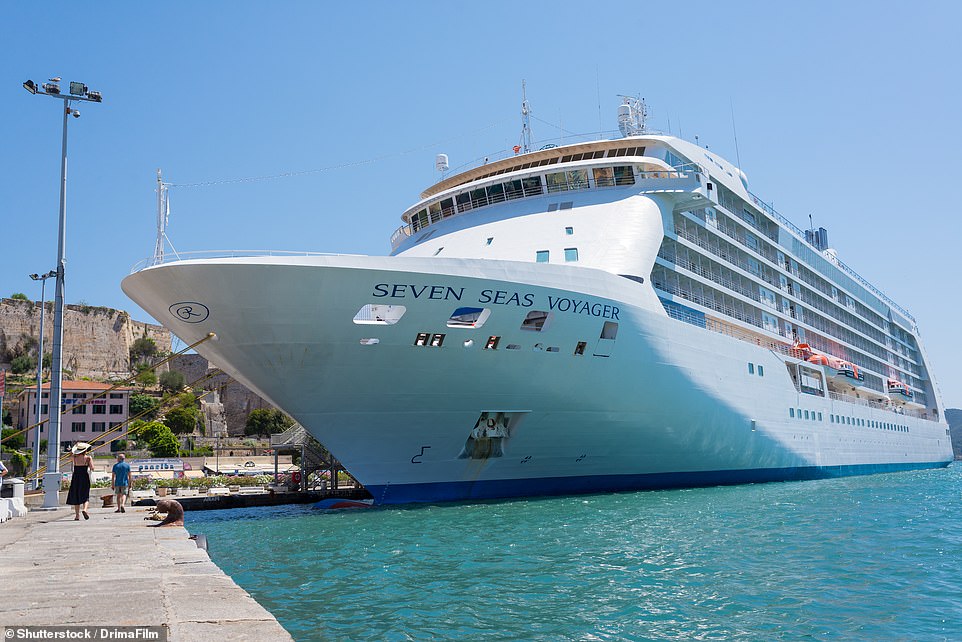 A shot of the Regent Seven Seas Voyager ship taken in Tuscany in 2017. It is one of four medium luxury ships owned by the firm and the average passenger count is 750

It’s worth attending the afternoon-enrichment lectures in the Constellation Theatre as they’re designed to help you get more out of your travel experience by filling you in on local geography, wildlife, history, culture or politics. The speakers are usually academics, authors or former diplomats. You’ll see them around the ship later and they’ll happily discuss their favourite subject with you.

There’s an impressive range of restaurants designed to suit all moods and palates. If you fancy dressing up and being escorted to your Versace-adorned table by the maitre d’, head to the Compass Rose. If you want to tuck into a steak, go to Prime Seven. If you can’t be bothered to get smart, have a burger or seafood at the Pool Grill.

Finish off the day with an hour-long show in the theatre. This will either be a musical revue by the ship’s troupe, or an entertainer flown in for the night. On Regent ships I’ve seen comedians, magicians, acrobats, pianists, acoustic guitarists, singers and dancers.

When you get back to your suite, the maid will have turned down your bed linen, dimmed the lights, switched on some chilled-out music and placed chocolates on the pillow. Your Italian Matermoll mattress will give you the best sleep you’ve ever had. In fact, my son loved his so much that he had one imported as soon as he got home.

Chern’ee shares her peoples history through her art ·

Flights: The shocking time passengers are still allowed to smoke on planes