Home » Travel » The Dark Side of Tourism: Animal Suffering

With the summer vacation season in full swing, the Mirror has just released a report detailing what many animal rights organizations have long known: that the travel industry around the world is ripe with animal suffering, even among attractions billed as sanctuaries.

As the Mirror article points out, most responsible travelers these days try to avoid blatantly cruel attractions that include such things as bear baiting or orangutan boxing matches, as well as even visiting animal circuses.

However, there are many attractions that appear ethical on the surface but still involve horrible consequences for animals including tiger sanctuaries, swimming with dolphins or riding an elephant through the jungle.

Here’s a closer look at some of the attractions that animal welfare groups are asking travelers to skip both this summer and indefinitely.

While a tiger sanctuary might seem like a better option than a caged tiger in a zoo, the Mirror says the word “sanctuary” is often entirely misleading, and this is particularly true in countries such as Thailand. In fact, in these so-called sanctuaries, tourists are often allowed to sit with a tiger for a photo opp.

Rule of thumb: If the attraction offers this type of opportunity, it’s best to avoid it altogether.

Why? Because as the Mirror story points out, in order for a wild animal like a tiger to be kept docile for tourists, it’s not only chained to the ground, it is also fed sedatives – which, it should go without saying, is not a humane or pleasant existence for a tiger.

What’s more, in order for tourists to get safe tiger selfies, the animals’ teeth and claws are often removed and the tendons in their wrists may be cut so that they are unable to swat or run. 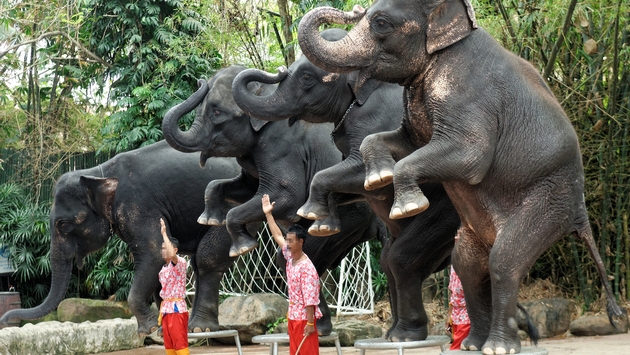 The extreme cruelty suffered by elephants involved in elephant rides is well documented, but many hapless tourists still remain unaware and contribute to the problem by continuing to support this type of attraction.

To begin with, any elephant in captivity offering elephant rides throughout southeast Asia has been subjected to a cruel tradition as a baby known as Phajaan (the crush). During this brutal process, the elephant is beaten and tortured with the express goal of breaking its spirit. This torture regularly includes putting hot nails into the baby elephant’s body, as well as repeatedly hitting them with clubs and locking them in small cages.

Many elephants die during this process. Others go crazy and have to be put down.

And before the torture even begins, the baby elephant has been ripped from its mother in the wild by poachers, which is also traumatizing. 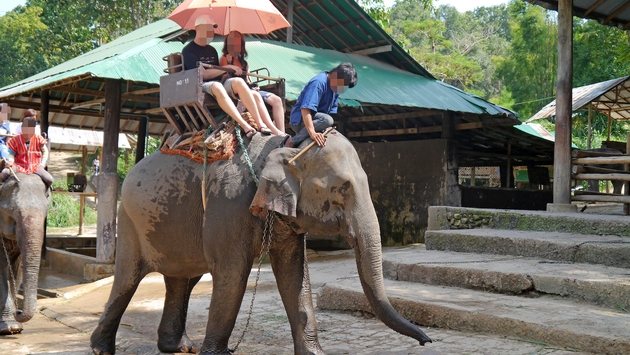 And if all of that is not bad enough and doesn’t cause you to think twice, keep in mind the bleak existence of the elephants who spend their lives providing rides for tourists.

When not giving rides or performing for a visitor’s entertainment, many elephants are chained all day and night, often on chains less than three meters long.

Many are also fed poor diets and given no opportunity to socialize, which is traumatizing for such highly-intelligent creatures who are used to forming strong social bonds and living in tight-knit clans.

Even seemingly harmless attractions that involve elephants performing tricks like painting pictures, dancing or playing piano, have all involved that elephant being subjected to Phajaan. Just avoid them.

Yet another activity that still attracts droves of tourists, swimming with dolphins requires a life in captivity for the dolphins and often they are kept in incredibly small enclosures, which is unnatural for animals that are used to swimming vast distances. 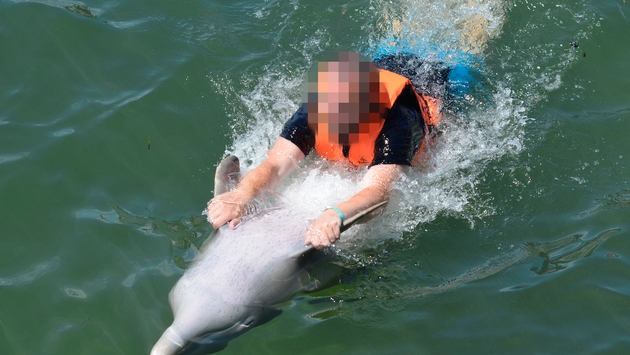 What’s more, according to the Mirror report, research has found that swimming close to bottlenose dolphins can be highly stressful for the aquatic creatures, preventing them from resting, feeding or nurturing their young.

“Aquariums and marine-mammal theme parks like SeaWorld, the Miami Seaquarium and Canada’s Marineland are part of a billion-dollar industry built on the suffering of intelligent, social beings who are denied everything that is natural and important to them.”

The PETA website goes on to point out that dolphins are used to living in large, complex social groups and swimming vast distances every day in the open ocean.

“In captivity, these animals can only swim in endless circles in tanks that are the equivalent of bathtubs, and they are denied the opportunity to engage in almost any natural behavior,” says PETA.

For those not swayed by PETA’s take on the matter, it’s important to note that many others have expressed criticism of programs that keep dolphins in captivity.

The death of a four-year-old bottlenose dolphin named Nea at a Chicago zoo several years ago led some biologists to speak out about why the animals shouldn’t be kept in captivity for entertainment.

Bottom line: don’t be swayed by advertisements promoting this experience as unforgettable. The reality is a dolphin suffers an inhumane existence so that you can have that swim.

The Mirror article also highlights the troubling back story of lion sanctuaries around the world that raise lions from birth and allow tourists to cuddle and take selfies with the animals.

However, the dark reality of this process is that many of these beautiful creatures end up being sold off to the brutal big game hunters who enjoy the sport of killing them.

When the lions reach maturity, they are sold to the hunters, who then trap the animals in an enclosed area and spend hours following them before shooting them for entertainment, reports the Mirror.

Making matters worse, the lions have spent their lives accustomed to positive interactions with tourists, they are less fearful of humans and thus easier to hunt.

While a long-term fix, one that addresses the cruelties that the animals suffer as part of these attractions, is a long way off and involves a variety of complex realities there are things you can do now as a tourist and traveler.

To begin with, you can make it a point to do your research before engaging in any of these activities and avoid those mentioned.

You can also spread the word, letting others in your network know about the realities of such attractions.

VIDEO: Travel Talk with the leadership team of the Dubai Airshow 2019