Home » Travel » The best things to do in Ribble Valley, Lancashire

Britain at its best: Scenic countryside, famous landmarks, Michelin-starred restaurants and a gin school… no quibble with Ribble!

There is a horse on the ceiling. Not Pegasus, but Kettledrum, winner of the 1861 Derby. This, in the apse of a church, is surprising.

Designed by Edward Pugin (son of the architect of the Palace of Westminster) and secreted down a remote country lane in the Ribble Valley, the tiny Catholic Church of St Hubert was, it turns out, built with the horse’s winnings.

The descendants of Charles Towneley, who owned the racehorse, are still buried in this churchyard, beneath a towering angel which reputedly cost more than the church itself. 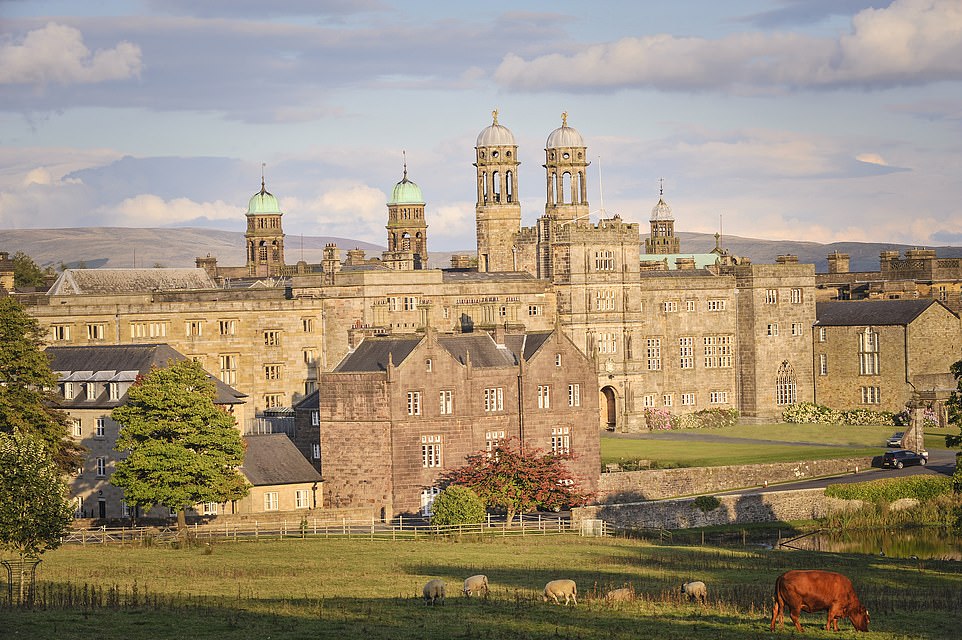 Treasure trove: Stonyhurst College is regarded as ‘the oldest museum in the English-speaking world’

Had my expectation of Lancashire been of black pudding and dark, Satanic mills, I would be disappointed.

The valley contains the Forest of Bowland, designated an Area of Outstanding Natural Beauty, which is not a forest but moorland, fragrant with heather and rich in burbling brooks.

In the perfectly preserved village of Downham stands St Leonard’s church. Queen Mary said the vista from the porch over to Pendle Hill was ‘the finest view from any church in England’.

I don walking shoes to explore some of the trails that send you skipping over stepping stones and skirting lichen-covered dry-stone walls, watched by sheep. 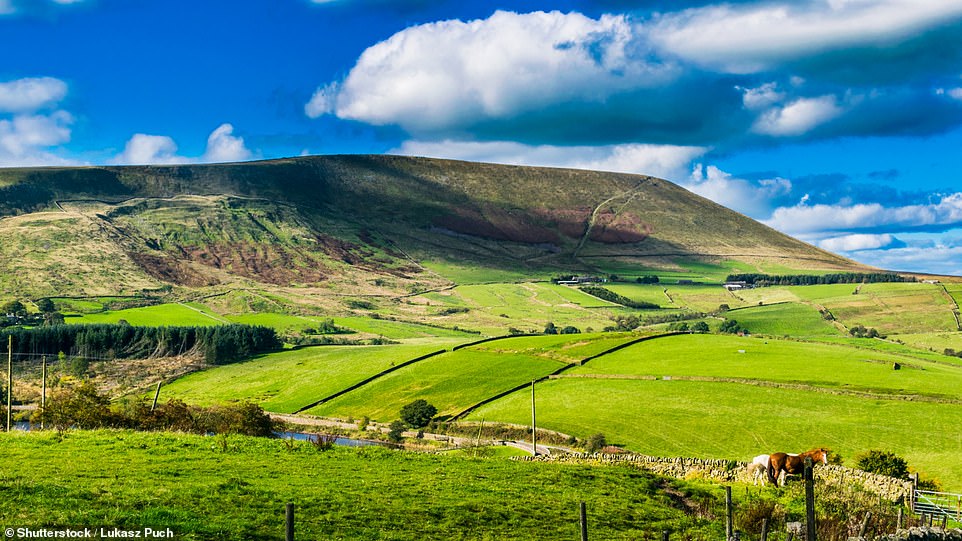 Like Oliver Cromwell on his way to the Battle of Preston in 1648, I crossed over an ancient stone bridge, then ambled through Dunsop Bridge — another tiny village, often cited as the centre of the British Isles. Pendle Hill offered a tougher challenge. You have to pity the Pendle ‘witches’, who were marched 51 miles from here to Lancaster Castle, where they were tried and hanged in 1612.

Walking trails are punctuated by watering holes. I sought refreshment on the terrace of the Inn at Whitewell, with its glorious views over the River Hodder. It has been run by the Bowman family for three generations. Charles, the current incumbent, introduced me to the gentle art of fly-fishing. The trout, alas, remained elusive.

The atmospheric ruins of the Cistercian Abbeys of Whalley and Sawley speak of the Dissolution of the Monasteries when, in 1536 and 1537 respectively, both Abbots were executed. 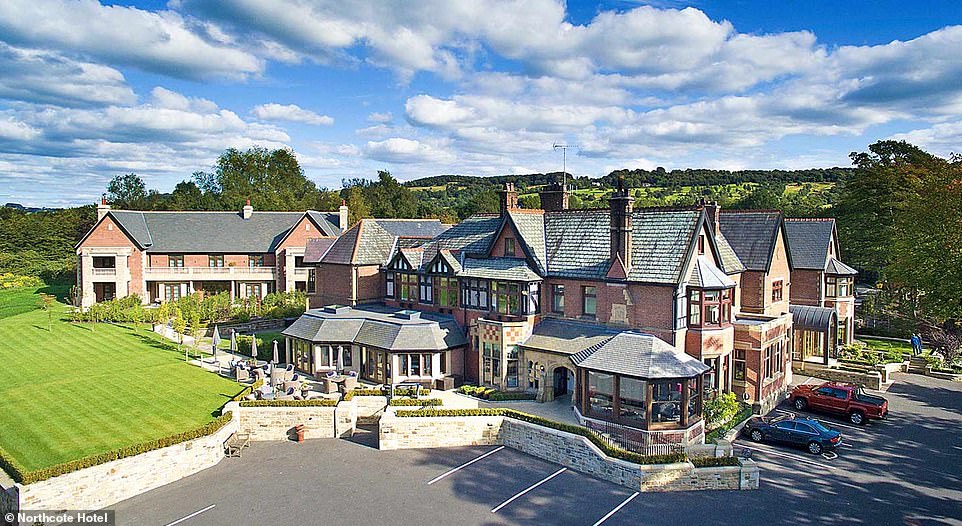 The Daily Mail’s Teresa Levonian stayed at the Northcote Hotel, which is nestled into the Ribble Valley hills 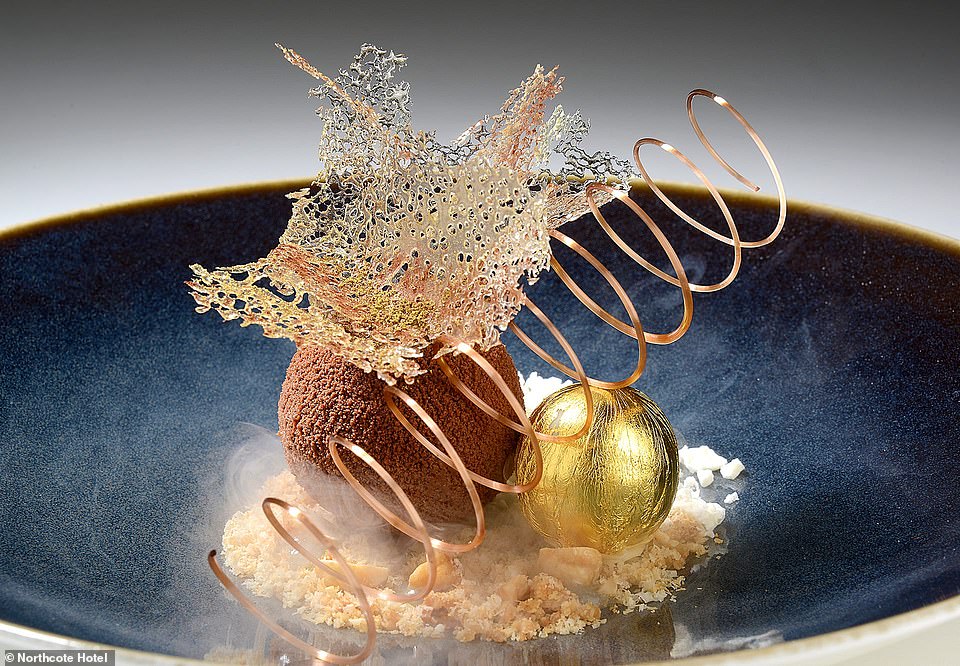 Teresa stayed at Northcote Hotel (northcote.com), which has B&B doubles from £150.

‘It wasn’t a good time to be a Catholic in England,’ Dr Jan Graffius, curator of Stonyhurst College, tells me. ‘So in 1593 the Jesuits established a school to educate Catholic English boys, in Saint-Omer, France.’

In 1794, after the Jesuits had been expelled from Europe, the college set up shop in these magnificent premises. Alumni ranged from martyrs to men of letters — including Arthur Conan Doyle, whose school reports are on display in what is regarded as ‘the oldest museum in the English-speaking world’.

I marvelled at a Shakespeare First Folio, the gold-and-pearl crucifix of Thomas More, and a fragment of Thomas Becket’s skull. Perhaps the strangest ‘object’ is the 2,500-year-old mummified body of a boy, which had been sold to the Egyptian railways for fuel.

Modest pubs, such as the White Swan at Fence, also offer Michelin-starred feasts, while cheese platters are piled with local produce.

Not forgetting craft gin, for which Lancashire is fast gaining a reputation. I spent a merry afternoon at the award-winning Goosnargh ‘gin school’, sniffing dozens of botanicals to create my own personal gin! It was, of course, delicious. And I named it Kettledrum, after the horse.

The 40 most beautiful coastlines in the world