The story behind the magic kingdom: Stunning new book charts the fascinating history of Disneyland across six decades with a treasure trove of amazing pictures

It is one of the world’s most visited tourist attractions, having welcomed more than 800million people through its doors.

And now the fascinating history of the original Disneyland in California has been revealed in a stunning new book by Taschen, which shows how a dusty tract of orange groves an hour south of Los Angeles was transformed across six decades into one of the world’s most beloved destinations.

The book, called Walt Disney’s Disneyland by Chris Nichols, is described as a ‘bountiful visual history’ that ‘draws on Disney’s vast historical collections, private archives, and the golden age of photojournalism’ to tell the story of the park.

Pictures show Walt’s earliest inspirations and ideas for the park as well as extraordinary feats of design and engineering, its grand opening and each of its immersive ‘lands’ from Main Street USA to Tomorrowland.

While other images depict the much-loved sign from the road that welcomed visitors to Disney between 1958 and 1989, as well as children running across the Cinderella Castle drawbridge on the day the park opened in 1955. 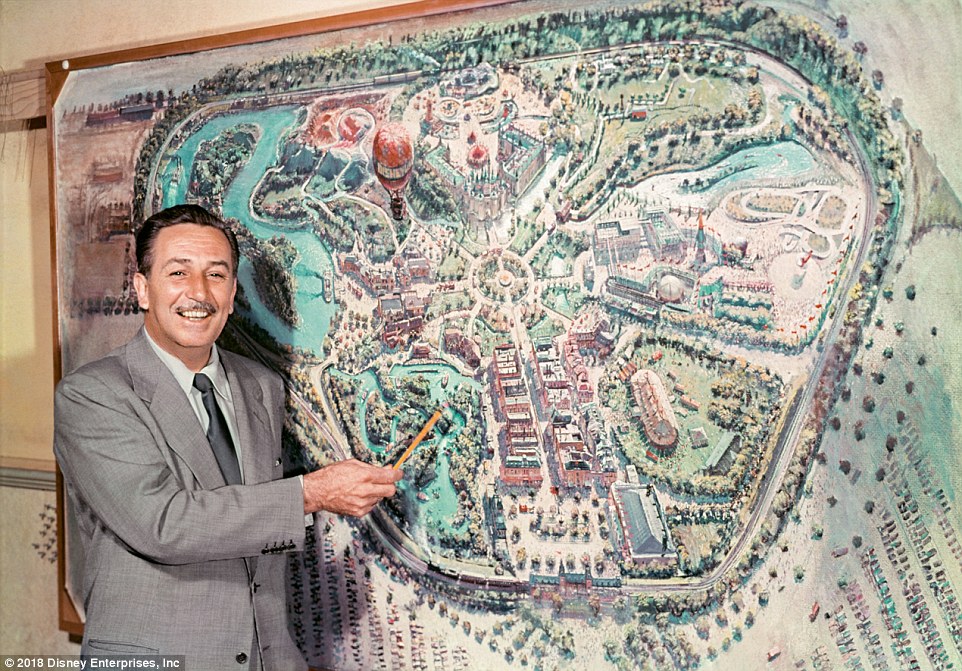 Walt Disney described his park on television in 1954 (above) with the help of an aerial plan. Disneyland then opened to the public on July 17, 1955 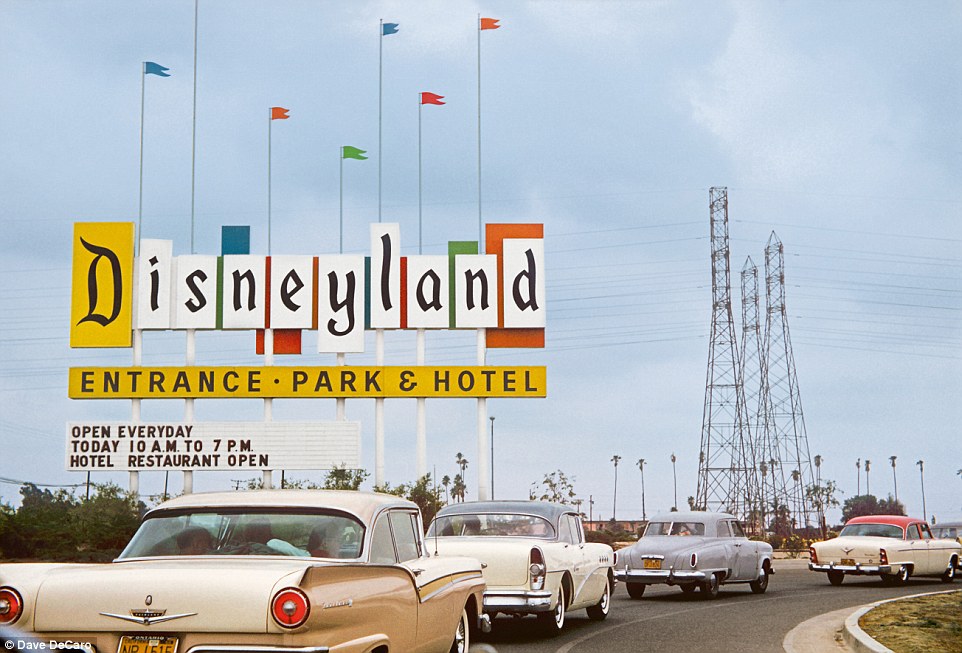 The original Disneyland sign on Harbor Boulevard welcomed guests from 1958 to 1989. Its bold colours and shapes made it instantly recognisable to visitors, Nichols says 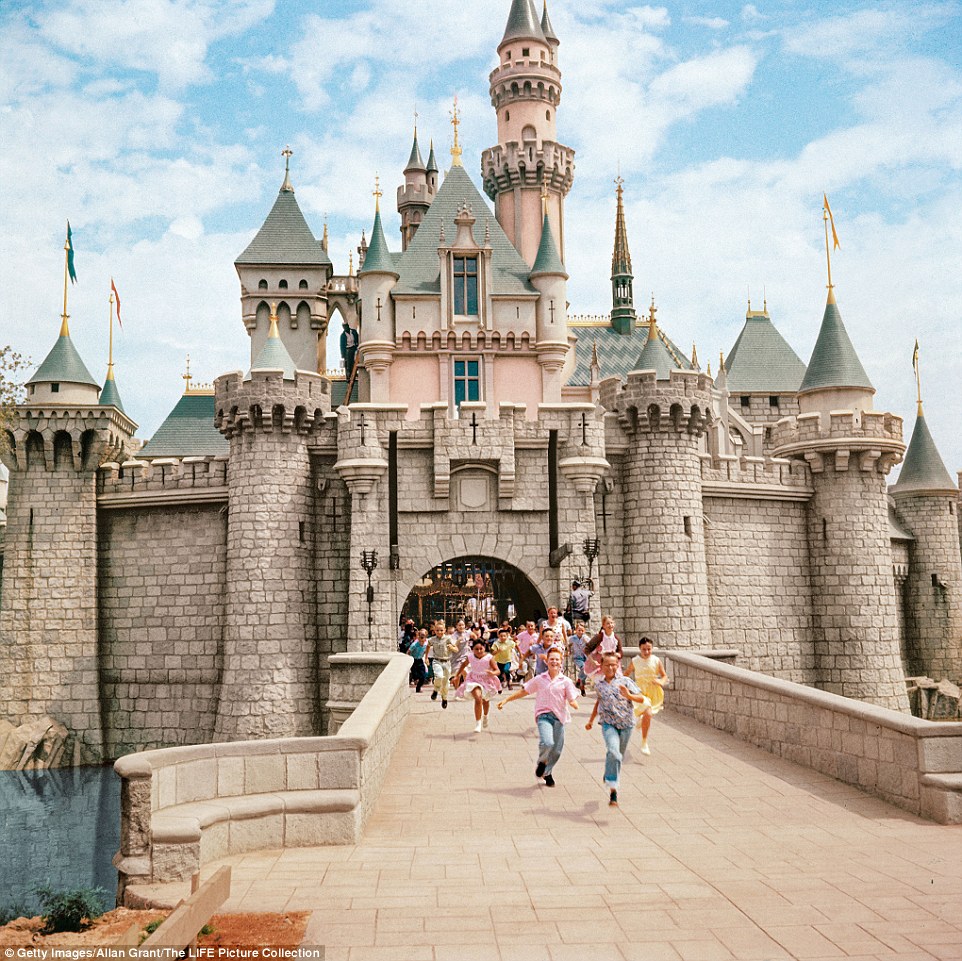 The drawbridge to Sleeping Beauty Castle was lowered for the first time on opening day in 1955 (above), and only once since when the redesigned Fantasyland opened on May 25, 1983, Nichols says. The castle sits at the centre of Disneyland and is one of the world’s most recognisable structures, with spires that rise as high as 77 feet (about 24m). But it wasn’t the first concept that Walt Disney had in mind. A palace for Cinderella and a castle for Robin Hood were considered in the planning stages 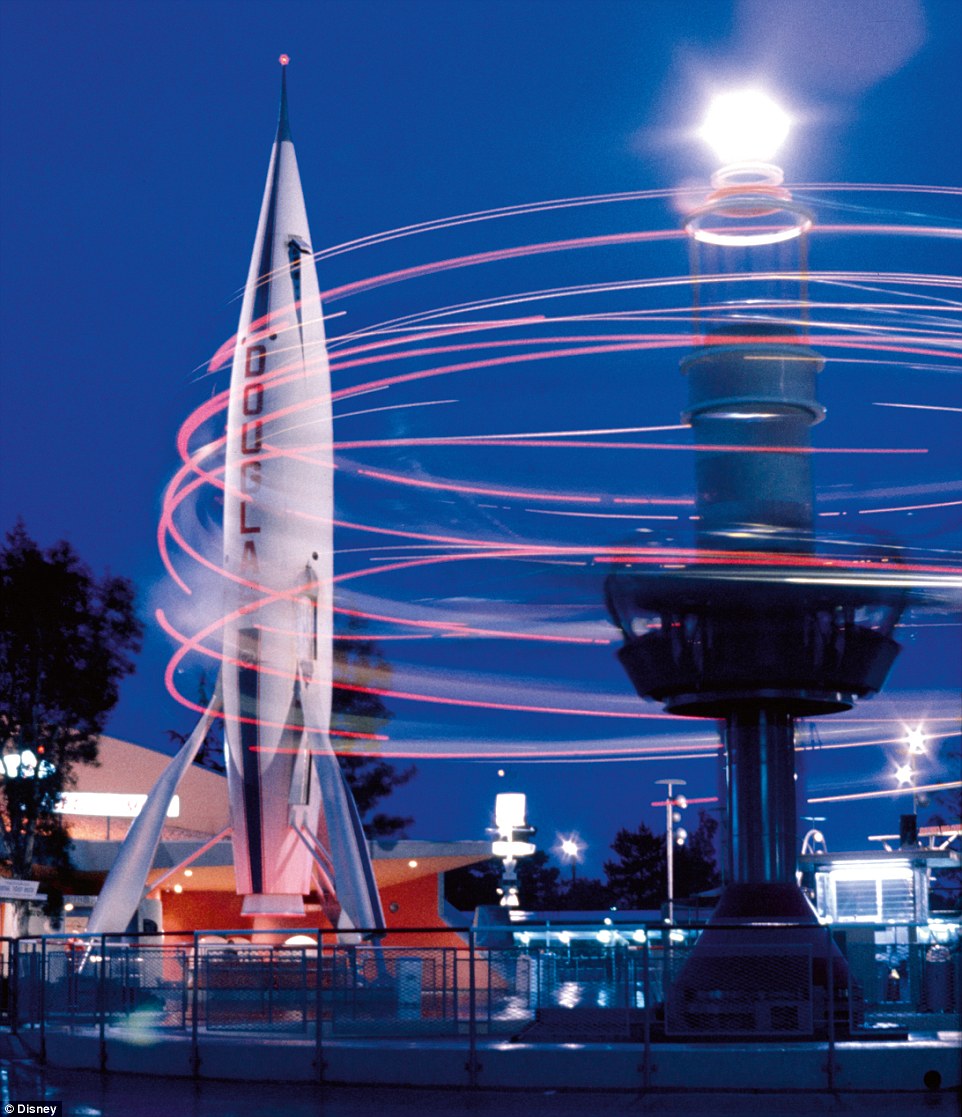 Fourteen years before actual astronauts would visit the moon, the Rocket to the Moon and Astro-Jets attractions offered Tomorrowland guests the simulated thrill of blasting into space

Monstro the Whale, from Pinocchio, guards the entrance to the Storybook Land Canal Boats in 1956. His giant blinking eye and spouting blowhole sometimes surprised guests posing for photos 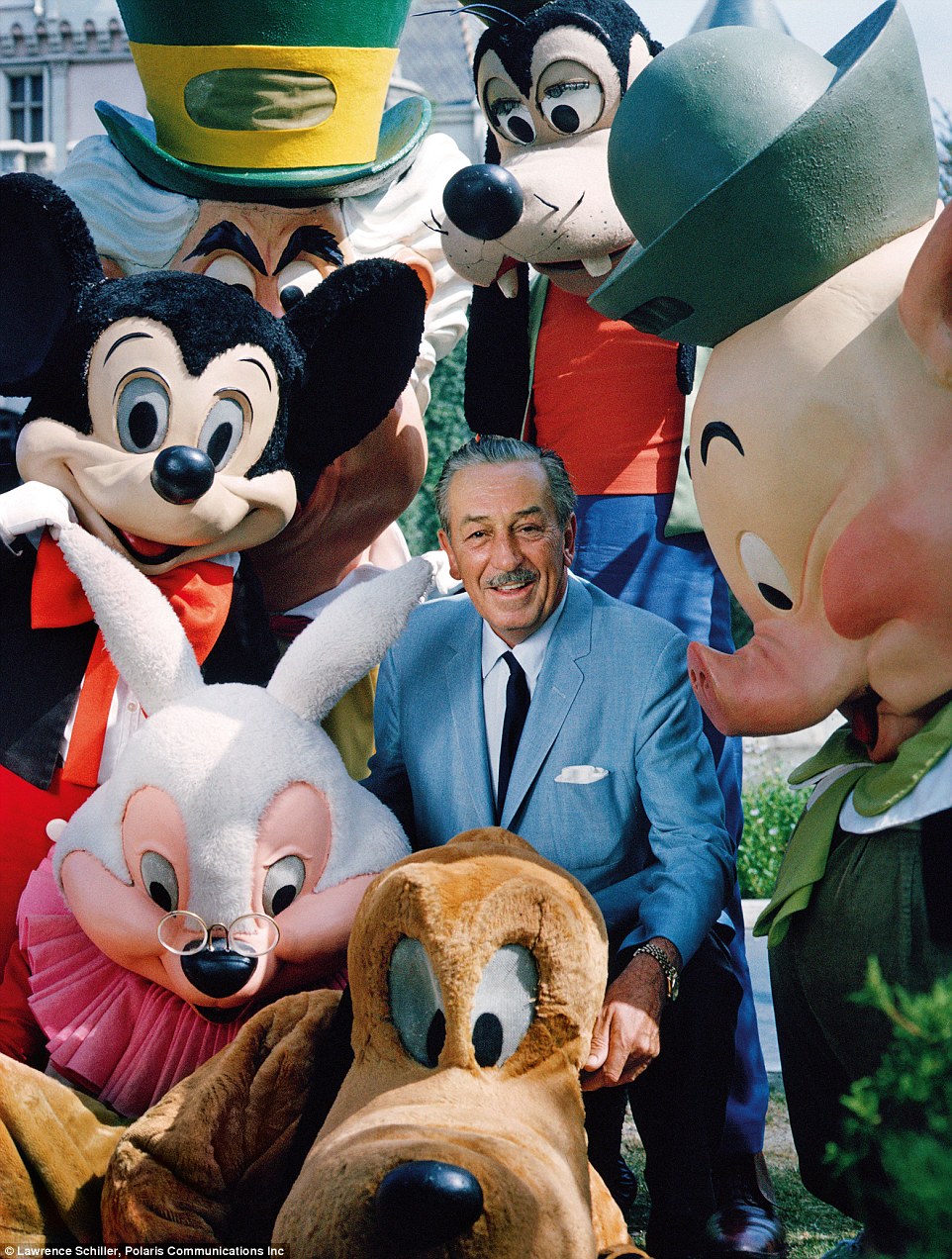 Walt Disney is joined in 1964 by some of his most adored characters. Many starred in what Walt called ‘classic stories of everyone’s youth’ that, in Fantasyland, had ‘become realities for youngsters of all ages to participate in’ 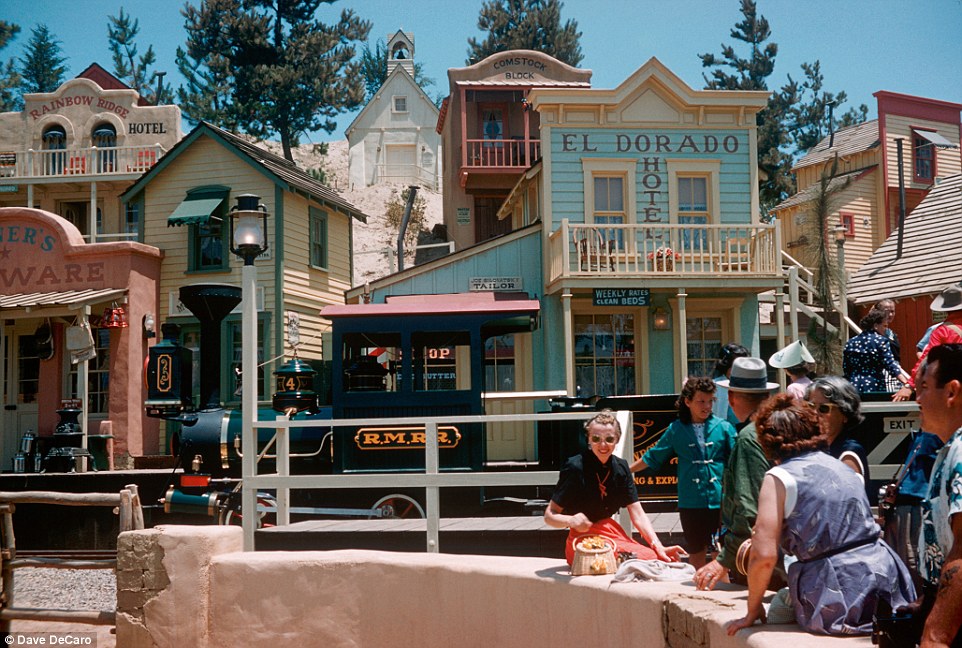 The buildings of the Rainbow Ridge mining town were designed by art director and set designer Bill Martin, who recalled they were a favourite of the Disney family. He said: ‘I remember that Walt and Lilly [Walt’s wife] would often walk along the pathways between those little buildings when they stayed at the park overnight.’ Although the attraction is long gone, the little town can still be seen in the queue to the Big Thunder Mountain Railroad 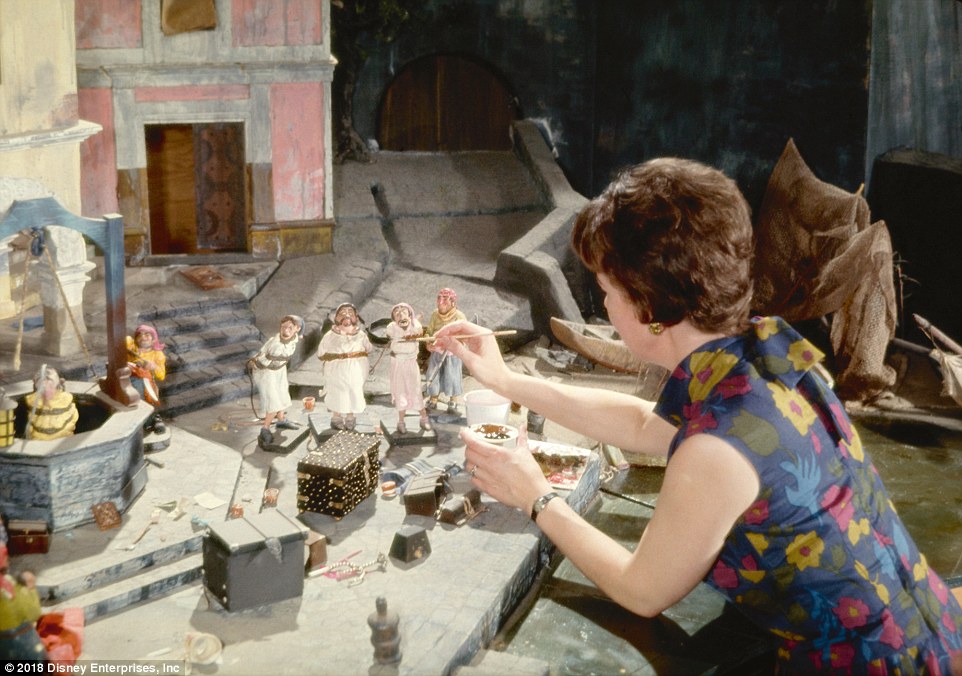 One of the original members of the WED Model Shop, Harriet Burns, helped construct the scale models for Pirates of the Caribbean so that Walt could study every detail from the point of view of guests riding the finished attraction. Though Walt oversaw the construction of the attraction, Nichols says, it did not open until after his death in 1966. Harriet is pictured working on the model in 1967 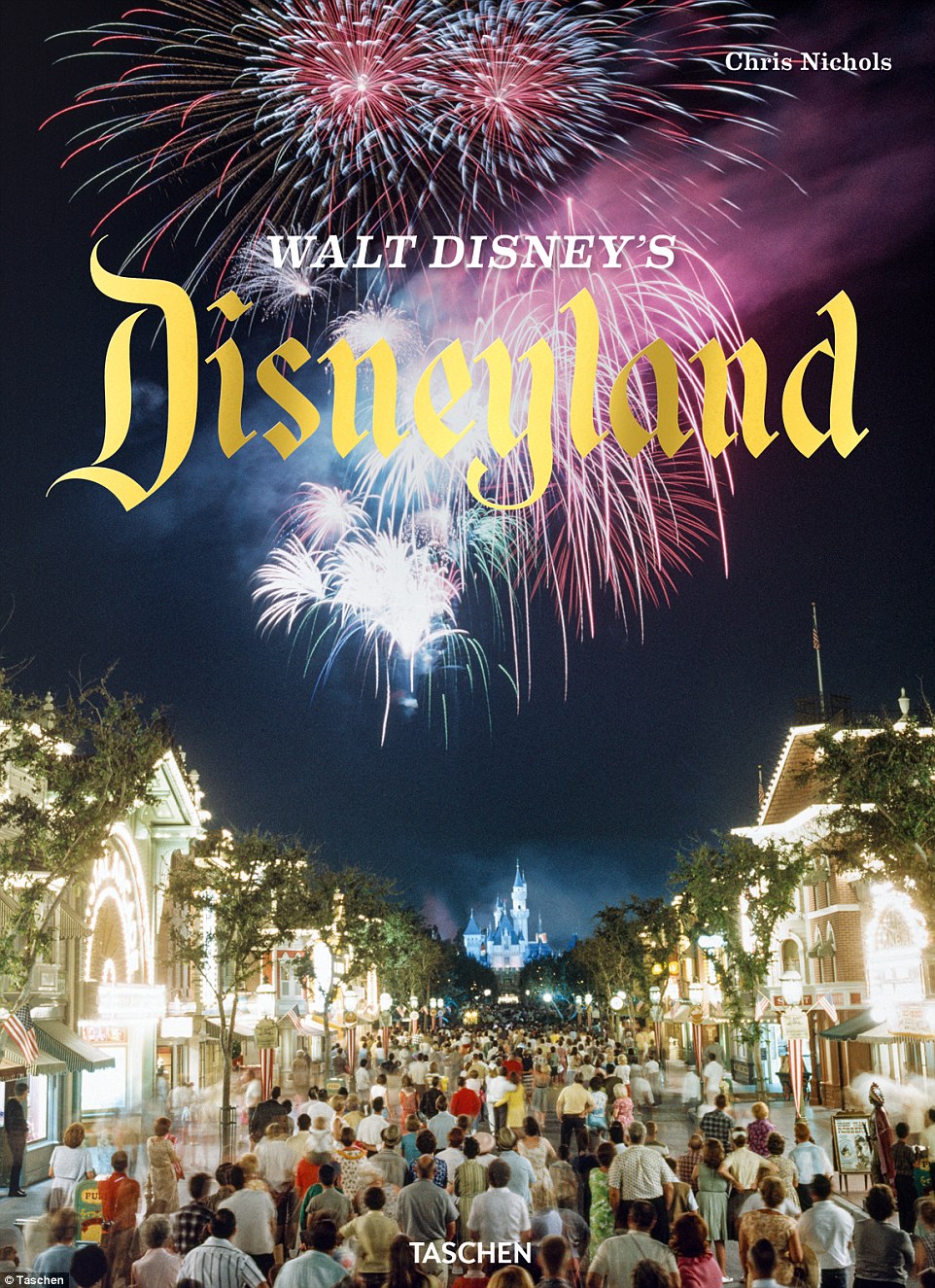 Peaks and troughs: cycling and eating in Austria’s Tyrol

The best country for expats moving East has been named for weather, price and community

I worked at Disney World for 2 years. Here are 10 things I wish tourists would stop wasting money on.