Tourists can visit New Zealand from April 12 and this timelapse video and accompanying stunning images are jaw-dropping reminders of the eye-popping sights awaiting them when they venture out and explore the country’s landscapes.

The visuals are the work of San Francisco-based photographer Michael Shainblum, 31, who was inspired to visit the remote country after watching Lord of the Rings as a child, with the trilogy filmed on both the North and South islands.

The video, which has been viewed more than 80,000 times, captures some of the country’s most jaw-dropping sites including the snowy crest of Mount Cook, the majesty of Milford Sound, the dinosaur egg-like Moeraki Boulders on the Otago coast and the famed willow tree leaning over Lake Wanaka. 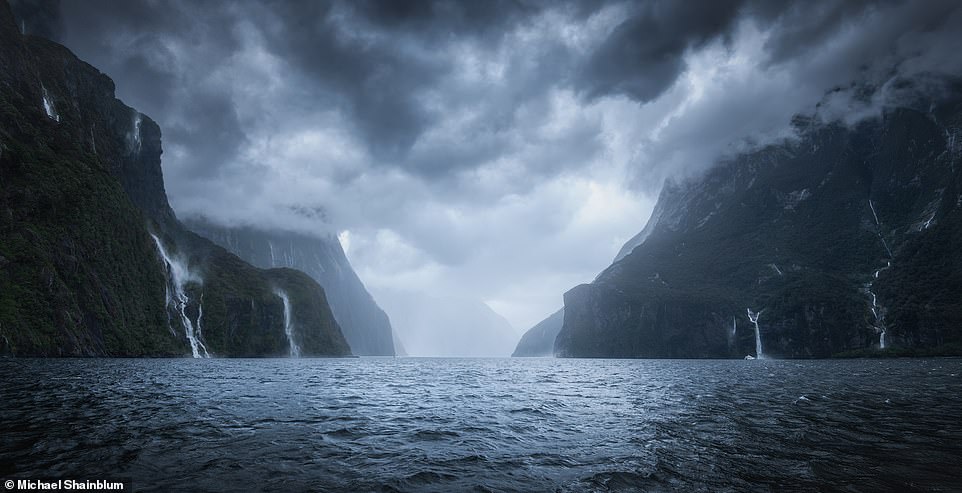 San Francisco-based photographer Michael Shainblum, 31 was inspired to visit New Zealand after watching Lord of the Rings as a child, with the trilogy filmed on both the North and South islands. Pictured, Milford Sound 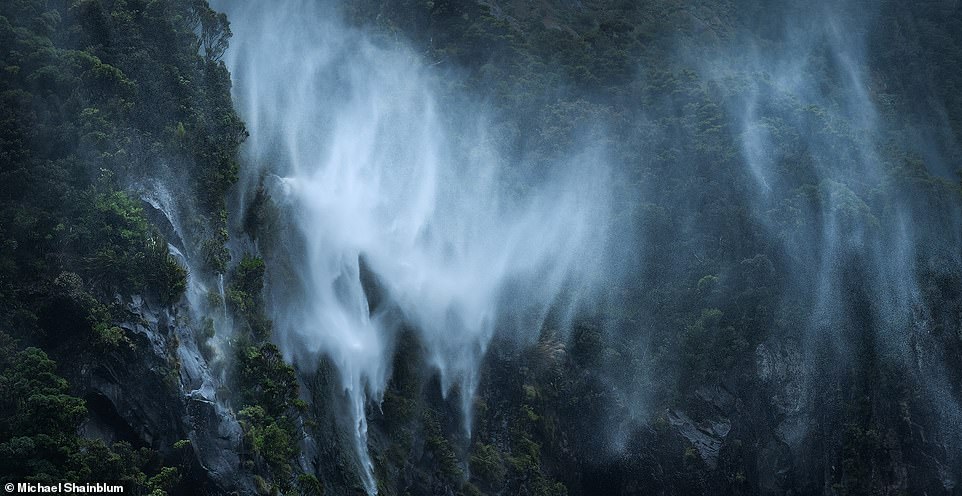 The American photographer said he certainly wasn’t disappointed after visiting his dream destination. Pictured, a dramatic waterfall cascading down the cliffs at Milford Sound 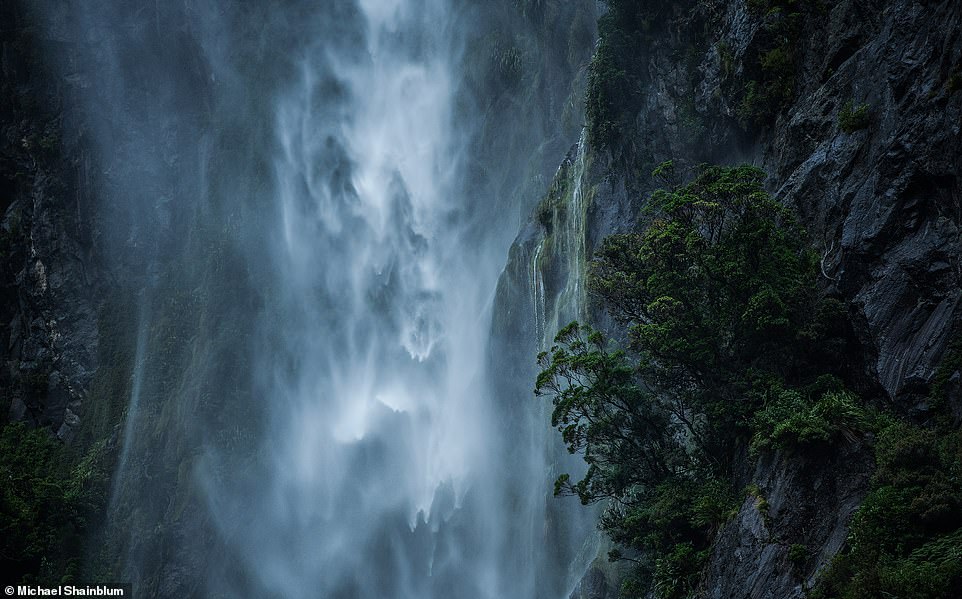 Shainblum said of New Zealand: ‘It is a remarkable place… The landscapes are just incredible to witness’

To make his timelapse footage, Shainblum compressed more than 50,000 images into video files and set the finished motion picture to music.

Meanwhile, Shainblum’s atmospheric images do an equally good job at making you want to hop on a plane, pronto.

The American, aged 31, said he was gobsmacked by New Zealand’s terrain.

He told MailOnline Travel: ‘It is a remarkable place. It’s beautiful, first of all. Absolutely spectacular. The landscapes are just incredible to witness.

‘The range of things you can see in a day in New Zealand is pretty interesting, from the lush rainforest to the high ridge peaks to the lone oak trees just kind of sitting out on the fields, and to the seascapes. Just beautiful, dramatic, striking seascapes.’ 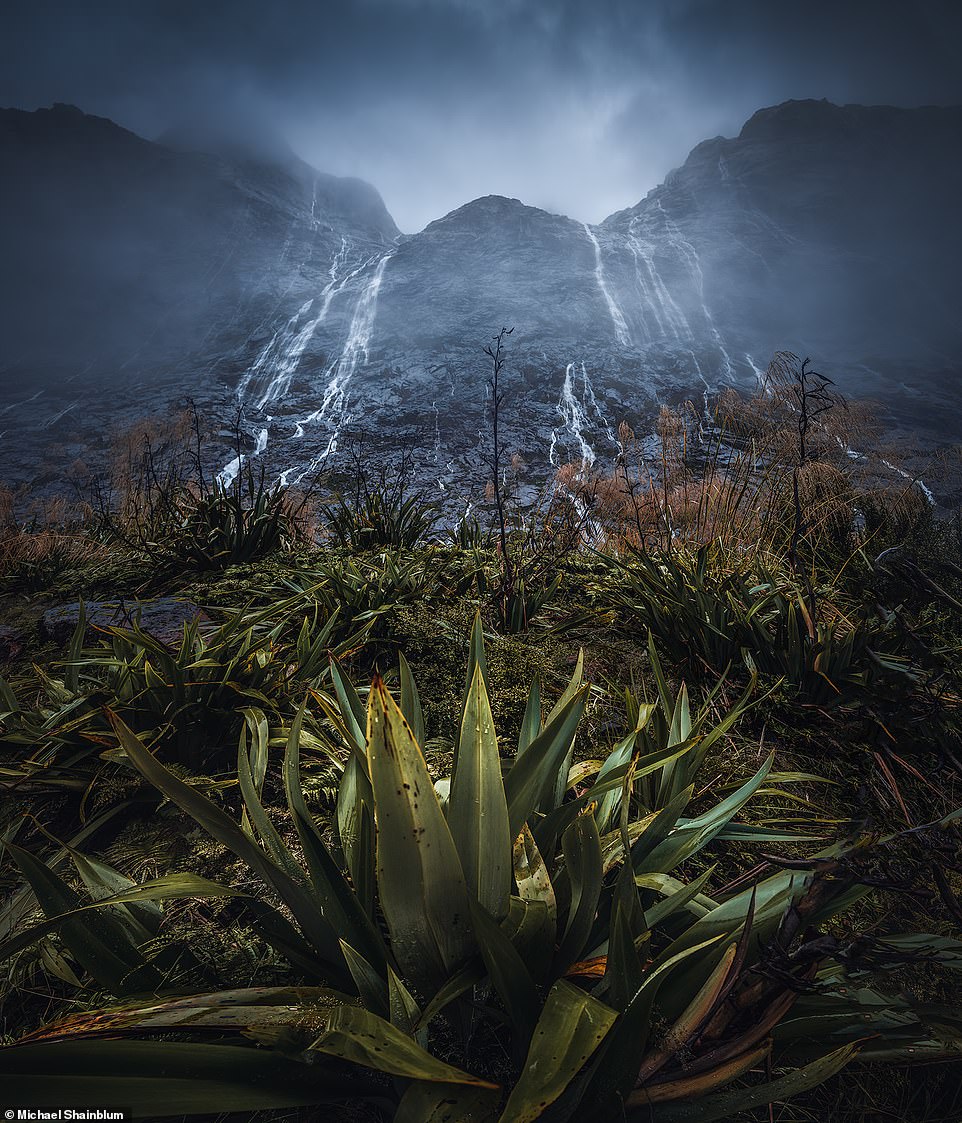 When it came to his favourite location in New Zealand, Shainblum said it was tough to pick one but Milford Sound – a fiord in the southwest of the South Island – made a big impression with its ‘striking cliffs’ and ‘pouring’ 1,000ft waterfalls 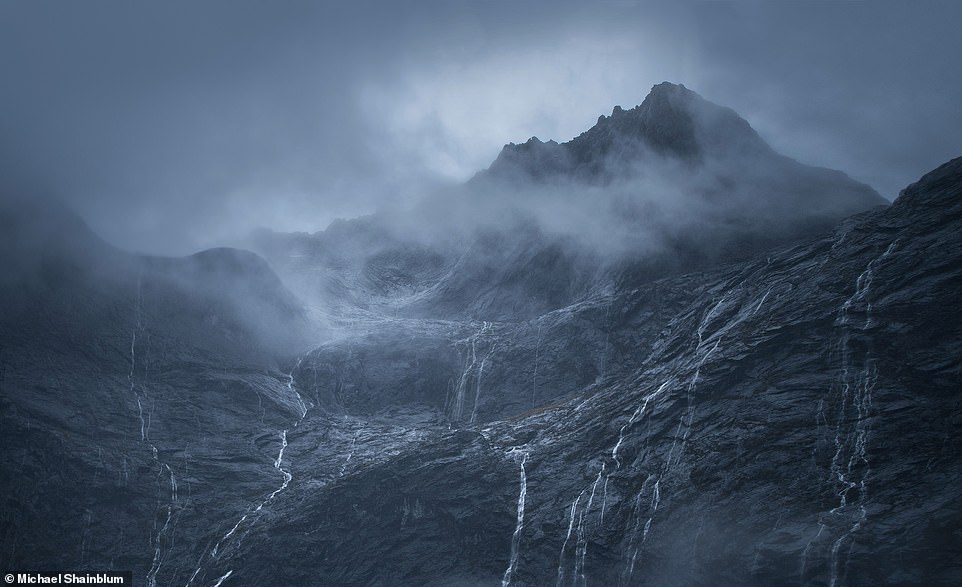 Did he have a favourite location? Shainblum said it was tough to pick one, but that Milford Sound – a fiord in the southwest of the South Island – made a big impression with its ‘striking cliffs’ and ‘pouring’ 1,000ft waterfalls.

Along with the stunning otherworldly scenery, Shainblum said the ‘delicious food’ and the friendly locals he encountered in New Zealand were also worthy of writing home about.

He mused: ‘The people are so friendly. I don’t think I met a single rude person in my entire time being in New Zealand. Everyone was so nice, so friendly, just wanted to see what I was doing and even just if I was going to order some coffee I’d end up in some conversation.

‘It kind of warms your heart when you go to a place where people genuinely want to have a conversation with you and want to know who you are. It’s very different from what I’m used to, living in a place like San Francisco, where people just kind of do their own thing and you go about your business.

‘Whereas in New Zealand, everyone, they were just so warm and friendly. And the food. I ate a lot of food and it was all very delicious.’ 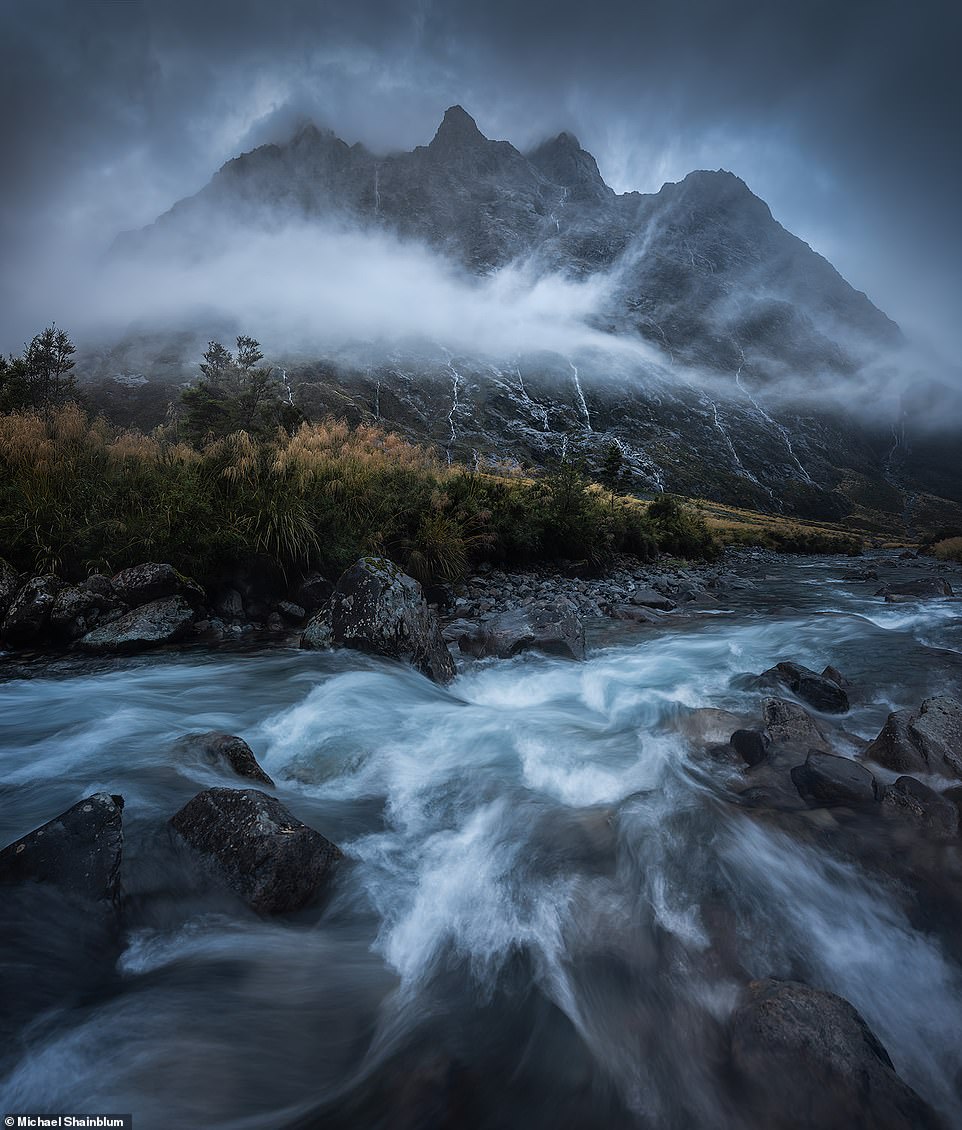 Along with the breathtaking otherworldly scenery, Shainblum said the ‘delicious food’ and the friendly locals he encountered in New Zealand were also worth writing home about

An aspect of his trip to ‘Middle-earth’ that was less alluring was the unpredictable weather – Shainblum had to battle the elements to get the shots he was after.

He recalls: ‘It was bittersweet in a sense because the weather was so tough to deal with that the wind, I mean, there were 60mph winds at times where you could barely stand up… you could barely set up a camera. And it rained, I think, every single day that I was there, for about two weeks.

‘But on the other end of it, that’s what produced so many incredible moments.

‘There was a lot of just sitting out in the rain, but then there would be little parts in the cloud and then a rainbow would form out of nowhere. And it would sit there for maybe 10 minutes. The light would cascade across the landscape. And then the storm would come back 10 minutes later and we would be in a torrential downpour again.’ 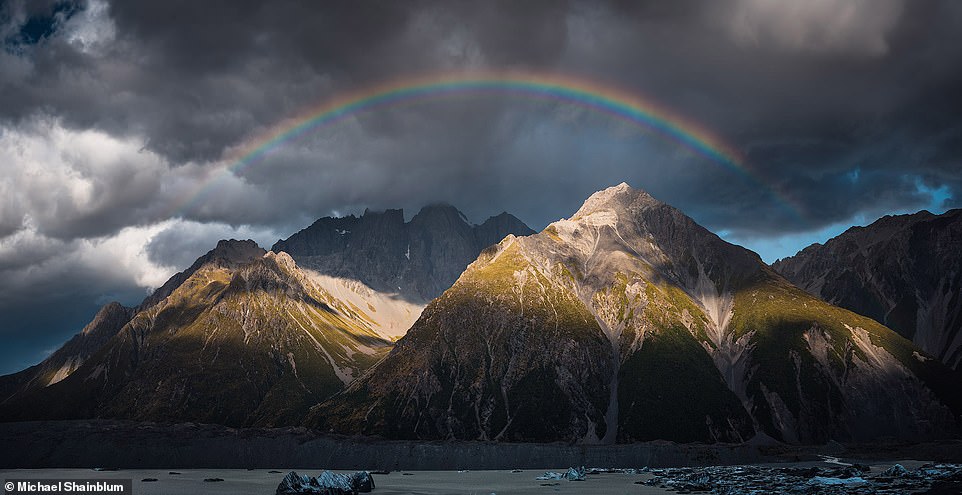 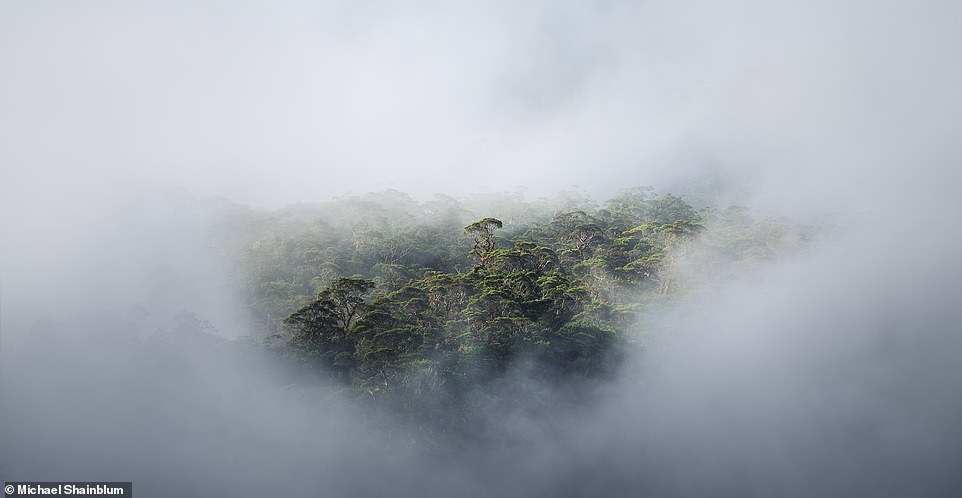 While in New Zealand, Shainblum took more than 50,000 images, which he later stitched together to make a timelapse film

Shainblum’s determination has paid off, with hundreds of viewers giving his work the thumbs up.

ClementLby wrote in response to his YouTube video: ‘The sunset on the Mount Cook is beautiful, soft and gorgeous and just after, the moonrise is extraordinary!’

Dave Hollingworth added: ‘Utterly breathtaking. I was fortunate to travel around NZ a few years ago. This took me back. Thank you!’

To see more of Michael’s work visit his website, www.shainblumphoto.com, his Instagram profile, www.instagram.com/shainblumphotography, and his YouTube channel. Tourists from Australia can visit New Zealand from April 12 and from visa-waiver countries from May 1. 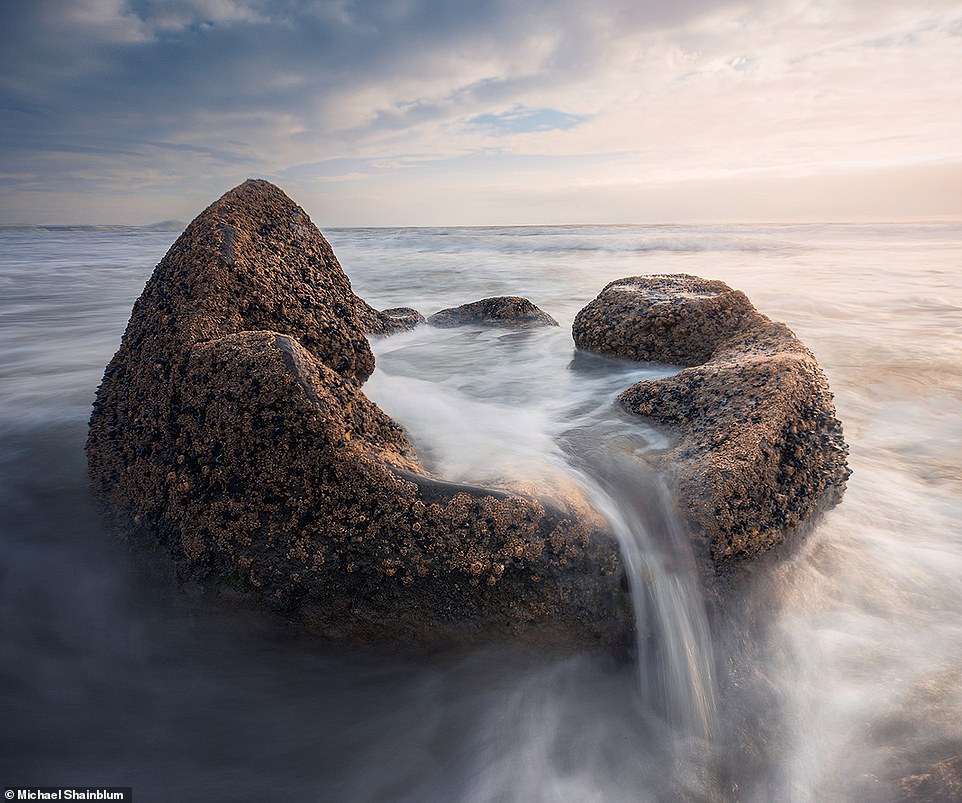