Home » Travel » Starry nights: the UK’s 10 best sites for star gazers – and where to stay near them

While 2020 has seen many of us grounded, the night skies have been ablaze with activity, from the launch of Elon Musk’s Starlink satellites to the appearance of comet Neowise and this month’s Perseid meteor showers. For unrivalled viewing opportunities head to Exmoor, where the national park runs regular night walks and talks, and you can hire telescopes from its visitor centres. It also runs the annual Dark Skies Festival (16-31 October). The Dunkery Beacon Country House is one of several hotels and inns that host talks and stargazing suppers during the festival.
• Double rooms from £89, dunkerybeaconaccommodation.co.uk

The skies above the Brecon Beacons are so free of light pollution that on a clear night you can spot the Milky Way and even meteor showers with the naked eye. Great viewing spots include Llangorse Lake, Pontsticill Reservoir and the national park visitor centre. Brecon Cottages has a great selection of cottages in the area and can advise on which are best for a stargazing break. For example, Duck Cottage, a cosy retreat for two, comes with its own antique brass telescope.
• Three nights cost from £307 at Duck Cottage, breconcottages.com 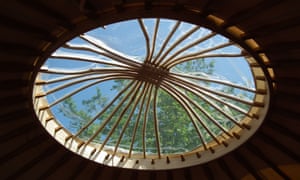 With so much foreign travel curtailed, adventure specialist Intrepid Travel has launched a range of retreats a lot closer to home, including a new break at Ivy Grange eco-farm in Suffolk. Accommodation is in four tastefully furnished yurts or a shepherd’s hut. All are set on decks and have a wood-burner, fire pit and barbecue. Highlights include campfire dinners and a guided night walk to a beauty spot for stargazing or to watch the moon rise.
• From £425pp for three days (two nights), intrepidtravel.com

The secrets to stargazing from your backyard

Celestial wonders await at the end of the Central Line, when you check into the Trap in Ongar, just an hour from London. The perspex roof of the triangular cabin allows you to gaze up at the heavens from the comfort of your kingsize bed. Or take an evening bath in the sunken outdoor tub that looks across the fields of this working farm.
• From £130 a night, canopyandstars.co.uk 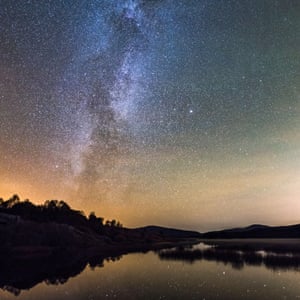 Galloway Forest Park became the UK’s first Dark Sky Park in 2009. A good starting point for budding astronomers is the Scottish Dark Sky Observatory near Loch Doon, with two large telescopes accessible to the public (currently closed, but due to reopen in September). Corrafeckloch Forest Cottage is a stylish retreat surrounded by wild meadows on the edge of the Forest Park.
• From £472 a week, sleeping six, sykescottages.co.uk 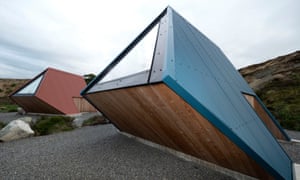 Netflix is one of the many creature comforts on offer at these cosy glamping pods in the foothills of the Sperrin Mountains, but it’s unlikely anything on screen will rival the celestial show that takes place each night in this Dark Sky Site. Large angled windows give uninterrupted views of night skies, or you can head to the communal stargazing porch with its open fire, for hot chocolate and toasted marshmallows. And on 16 October, the nearby OM Dark Sky Park and Observatory, with a state-of-the-art 14-inch aperture telescope, will open up the night sky for further exploration.
• From £100 a night, sleeping five, sperrinviewglamping.com

The area surrounding Glenlivet and Tomintoul has been designated the world’s most northerly dark sky park, which makes it one of the best spots in the UK to spot the Aurora Borealis, or the “mirrie dancers” as they’re known locally. The Glenlivet Estate is a great base for activities, by day and night, and boasts three Dark Sky Discovery Sites which offer perfect views, car parking and expert explanation of what you are witnessing. Stay at the Thistle Dhu, a charming B&B right in the heart of Glenlivet.
• Doubles from £85, thistledhuglenlivet.com 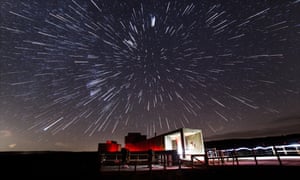 Some holiday cottages offer guests the use of a telescope. At Beacon Hill Farm you get your own observatory, complete with retractable roof, star maps and a powerful computerised telescope. The farm, which offers 15 luxury self-catering cottages, three shepherd’s huts and a spa, sits on the edge of Northumberland’s 570 square mile International Dark Sky Park. Regular stargazing events are arranged by the National Park and the Kielder Observatory less than an hour’s drive away.
• From £525 a week for a cottage sleeping four, premiercottages.co.uk

Gaze at starlit skies from the comfort of your bed in a Lotus Belle tent, with clear ceiling panels and telescope. Inside, the tent is decked out in hot pinks and oranges, a colour scheme inspired by Mexican artist Frida Kahlo, but it’s what’s outside that makes this place special. The off-grid site, in a rural location between Hereford and Hay-on-Wye, is lit only by lanterns and strings of solar-powered fairy lights. There’s even an outdoor bathroom for showering under the stars.
• From £75 a night, canopyandstars.co.uk

Famous for its towering cliffs, secluded coves and beaches, Golden Cap is also known for its lack of light pollution, which makes it an excellent spot for stargazing. The National Trust owns several holiday cottages, a bunkhouse and a campsite on the Golden Cap estate. St Gabriel’s Cottages is a collection of four homes in a large thatched farmhouse near Bridport.
• From £274 for three nights at Elm Cottage, sleeping five, nationaltrust.org.uk

Travelers Staying at Taj Mahal Too Long Are Now Penalized

San Francisco travel: A high-tech city of cultural icons, from bridge to bay

The Best Travel Services to Plan the Trip of Your Dreams