Spain’s tourist hotspot Ibiza has been hit by the devastating storms currently sweeping the nation. The tornado reportedly lifted a mobile workers cabin from the ground, with three men inside sustaining mild injuries. Meanwhile, the rest of the town was swamped with floodwaters and torrential rain. Holidaymakers in the region also took to social media to share their experiences in the party region.

Storms have been battering the region since the beginning of the week, causing devastation for many who have fallen into their path.

Two people have died while a further four are still thought to be missing as a result of the torrential rains and violent floodwaters.

The party island of Ibiza was hit with the brunt of the storm at the beginning of the week, with winds reaching a reported 80kmph.

Described as a tornado, the extreme weather uprooted around 200 trees and damaged infrastructure. 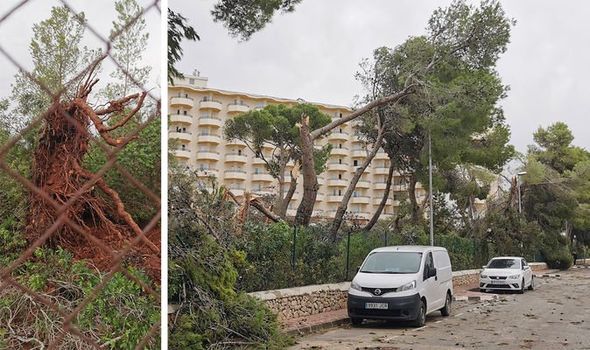 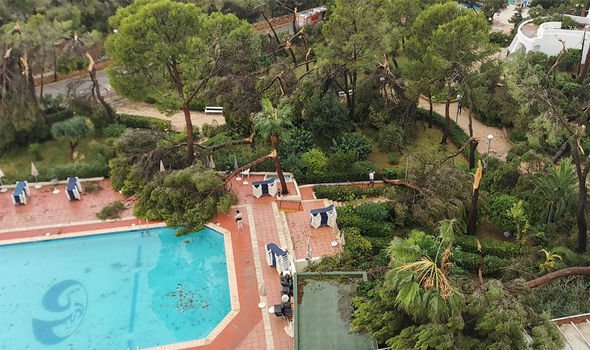 According to Euro Weekly the three men who were injured were swept through a building site in their portable cabin in the town of Sant Antoni de Portmany on the west coast of Ibiza.

Residents and holidaymakers took to Twitter to share images of the aftermath, depicting chaos in the streets,

Three sisters who were holidaying in the region posted an image of a giant tree which has smashed through the window of their villa-luckily all three remained uninjured.

Meanwhile, another holidaymaker posted a video of the blistering winds whipping past her hotel balcony.

In the video, the woman can be heard screaming: “Everything is blowing away.”

Then a voice of a child shouts: “Oh my god.”

The woman then shrieks: “Bits of the building are falling off.”

In the final seconds of the video, the child can be heard screaming again.

The woman described the experience as “crazy stuff”.

Following the first day of dramatic weather, the Foreign and Commonwealth Office issued a warning for Britons heading for the country.

It warned: “Severe rain and thunderstorms with the potential for flash flooding are forecast across Spain (especially in Catalonia, The Balearic Islands, Basque Country, Cantabria and Asturias).

“There could be damage to property, infrastructure and travel disruption. Please follow the advice of the local authorities.”

A “severe weather alert” was also put in place in a number of regions across the country.

The State Meteorological Agency has also reported that Catalonia, the Basque Country, Asturia, and Cantabria have been put under an “orange alert” for heavy rainfall and storms. 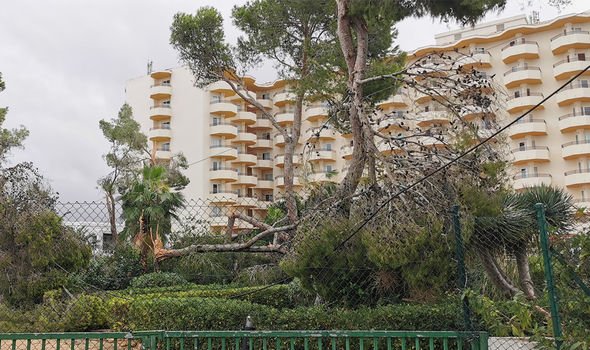 According to Spain’s meteorological agency AEMET, a slow-moving storm system known in Spain as a gota fría, or ‘cold drop’, will affect almost all of Spain for the rest of today.

Travellers have also been hit with a number of problems, including delays and diversions occurring at Palma Airport yesterday.

One Twitter user commended easyJet after an electrical storm in Ibiza saw their flight being rescheduled.

In a tweet, they wrote: “We were tired and annoyed but ultimately easyJet came through and organised a hotel for us.” 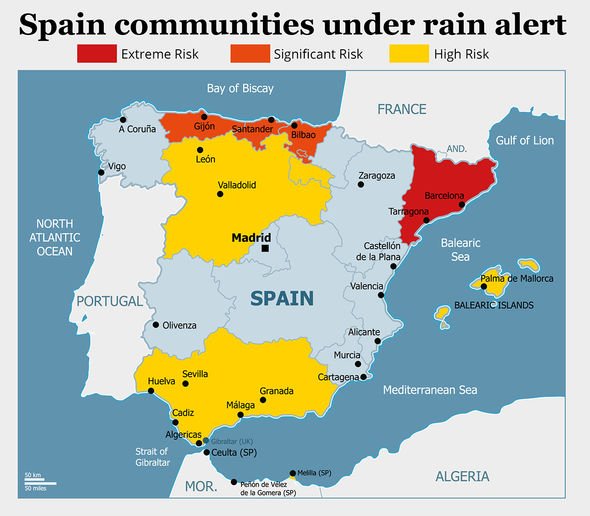 In Catalonia, a 75-year-old man fell victim to the violent floodwaters while trying to move his car outside of his home in Arenys de Munt.

His body was located on the beach hours later.

Amongst those missing is a mother and son who were swept away when the River Francolí burst its banks, engulfing their mobile home.

Two others were reportedly in a car when it was hit by the flood, while a Belgium man is yet to be located after his lorry was found in the river at l’Espulga de Francolí.

Chernobyl is set to become an official tourist attraction, but is it safe?

Ask the Captain: Can pilots refuse to fly the Boeing 737 Max after it’s recertified?

US Travel Announces Cancellation of IPW 2020

10 of the best small UK towns for winter breaks