Six people were held in Barcelona during an extraordinary pitched battle between protestors in hoodies who were charged by riot police after pelting them with bottles and other missiles. Regional Mossos d’Esquadra officers said this morninganother 24 people had been arrested in other parts of Catalonia, including 14 in Tarragona. The injured included 43 Mossos, one of the two main police forces involved in yesterday night’s/Tuesday night’s effort to restore order.

Masked protestors in the centre of Barcelona, who like those in the other cities turned into battle grounds made central government HQs their target, also set light to around 20 makeshift bonfires.

The extraordinary level of violence, which left parts of Catalonia’s main cities looking like war zones, led to the Spanish government hinting it could impose direct control over the region in an emergency statement issued just before midnight.

The statement said: “A minority wants to impose violence on the streets of Catalan cities, especially Barcelona, Tarragona, Girona and Lleida. 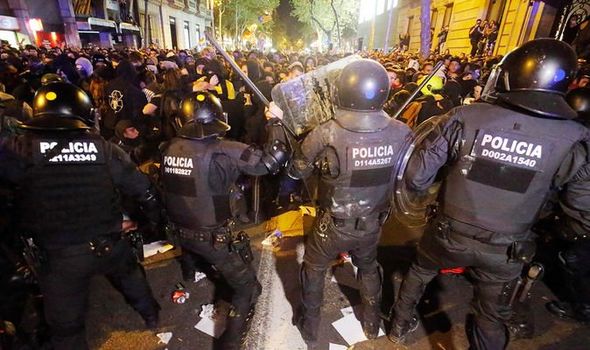 “Violent groups of protestors are attacking central government HQs in Tarragona, Girona and Lleida and are causing damage in other parts of Catalonia.

“It’s obvious we’re not dealing with a peaceful citizens’ movement but something which is co-ordinated by groups who use violence in the street to try to wreck cohabitation in Catalonia.

“Faced with this situation the government wants to recognise the work of the state forces of law and order. Some officers have been injured in the disturbances and the government values very positively the coordination and joint work of the Mossos d’Esquadra, National Police and Civil Guard.

“The Spanish government’s objective is and will always be to guarantee security and harmony in Catalonia and it will do so if necessary in accordance with its commitment to robustness, proportionality and unity.”

The statement sparked speculation Pedro Sanchez’s caretaker government could apply direct rule over the region if the trouble continued or activate a Law of National Security which would give police more powers to combat the violence.

Pedro Casado, leader of the right-wing PP party who next month will seek to defeat caretaker PM in new general elections, tweeted: “Following the violent disturbances which have increased tension in Catalonia, Sanchez must activate the Law of National Security so that no police force is subject to directives from pro-independence support and their integrity is protected.

“We must guarantee security and public order as a matter of urgency.”

Albert Rivera, leader of the centre-right Ciudadanos Party, said: “What we are seeing in Catalonia is inadmissible. 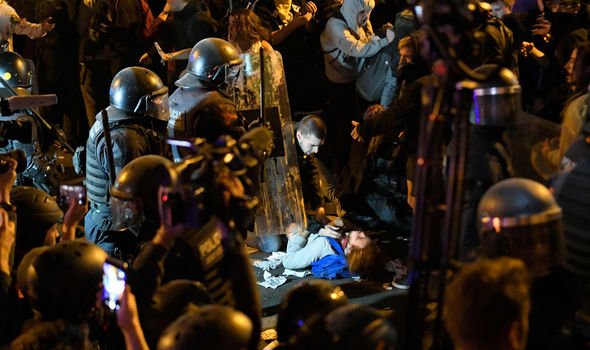 “Sanchez cannot remain impassive in the face of this wave of violence which is causing chaos.

“We warned him, we saw this coming.

“He has to act and protect people from the radical separatists.”

Last night’s violence followed the regional Catalan government’s admission it “empathised” with Monday’s blockade of Barcelona’s El Prat airport, which led to more than 100 flights being cancelled the day of the protests and another 45 yesterday/on Tuesday.

Holidaymakers and flight crews had to abandon cars and taxis and walk to the airport to try to catch their planes on time.

Barcelona midfielder Ivan Rakitic was among those travellers pictured leaving the airport on foot after the taxi rank outside terminal one was taken over by protestors who clashed with riot police on Monday evening.

Catalan regional government spokesman Meritxell Budo said it “understood the rage” people felt over the jailing of political and civic leaders behind a failed 2017 independence referendum, adding: “We demonstrate our empathy with pacific and decisive actions like the collapse of El Prat.”

Nine of the 12 political and civil leaders tried earlier this year were handed prison sentences on Monday by Spain’s Supreme Court.

Former Catalan Vice-President Oriol Junqueras was sentenced to 13 years in prison for sedition and misuse of public funds.

Three other former Catalan government ministers, Raul Romeva, Jordi Turull and Dolors Bassa, were jailed for 12 years after being found guilty of the same charges. 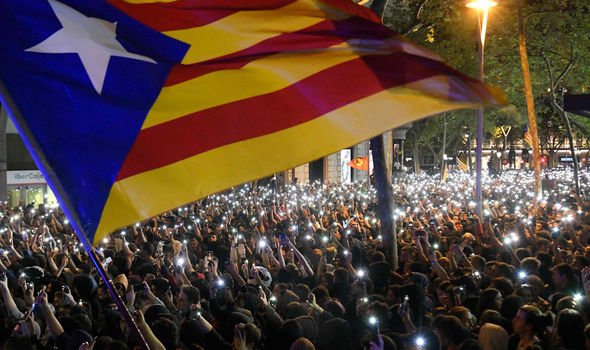 Barcelona Football Club criticised the sentences after they were made public, saying in a statement: “The resolution of the conflict in Catalonia must come exclusively from political dialogue.

“Therefore, now more than ever, the club asks all political leaders to lead a process of dialogue and negotiation to resolve this conflict, which should also allow for the release of convicted civic and political leaders.

“FC Barcelona also expresses all its support and solidarity to the families of those who are deprived of their freedom.”

Oriol Junqueras said in an audio message from prison: “This is not justice but revenge.”

Spain’s caretaker PM Pedro Sanchez welcomed the verdict, saying: “It brings an exemplary legal process to an end and confirms the failure of a political process. It has only left pain in its wake.” 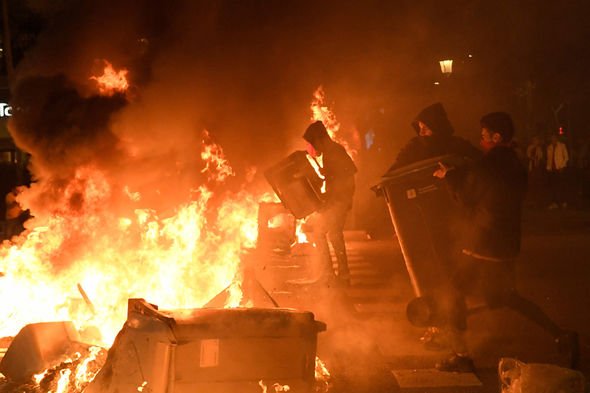 He was slapped down by tough-talking MP Ines Arrimadas who criticised him for “slandering Spain” but staying silent about Qatar where the right to hold power is passed on within the ruling Al Thani family and alcohol consumption is punished by flogging.

Guardiola spent two seasons playing in Qatar towards the end of his career as a midfielder.

Arrimadas, a leading light in anti-independence party Ciudadanos, raged: “I used to admire Guardiola as a player and a manager but I have to condemn his lies as a ‘politician.’

“Very brave to slander Spain but not a word about Qatar where he made a fortune. In our democracy every ideology has a place but not breaking the law. It is not dissidence, it’s sedition.” 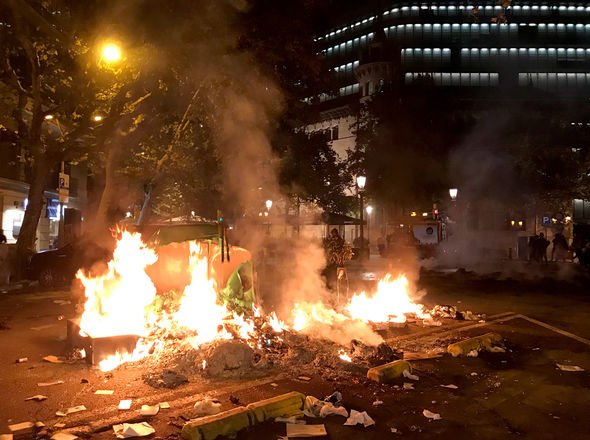 A spokesman for the Mossos d’Esquadra, speaking at 7.30am local time this morning/yesterday morning (WED) said: “Thirty people have been arrested for public order offences following the violence last night/on Tuesday night in Catalonia which began around 8pm and carried on in some cases until the early hours of the morning.

“Six of the arrests have taken place in Barcelona, 14 in Tarragona, one in Sabadell, one in l’Ametlla del Valles and eight in Lleida.

A regional government-run emergency coordination centre said 74 people had received medical attention, although the casualty figures were released late last night/on Tuesday night and had yet to be updated this morning/yesterday morning (WED).

Tarragona, a 90-minute drive south of Barcelona, was the scene of a violent assault on Monday by a pro-independence protestor filmed elbowing a middle-aged woman to the ground after trying to snatch a Spanish flag she was dancing with out of her hand.

Police confirmed yesterday/on Tuesday they had arrested a man over the assault. 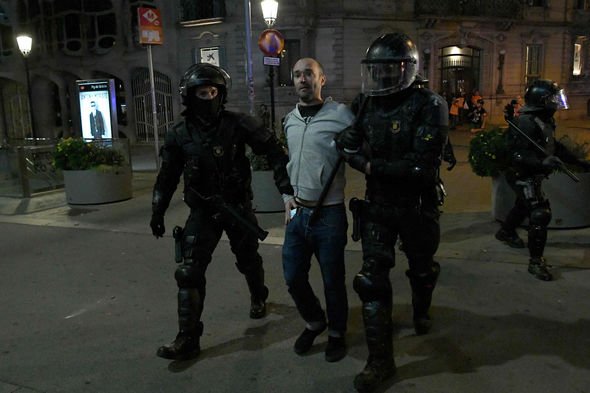 Spain’s government said today 72 police officers had been injured during violence over the last two days in Catalonia – 18 National Police officers and 54 members of the regional Mossos d’Esquadra police force.

The number of detentions during the violent protests in Catalonia which lasted into the early hours of this morning have been raised to more than 50, with sources there had been 29 arrests in the province of Barcelona, 14 in Tarragona and eight in Lerida.

Ministry of Interior officials said 157 makeshift bonfires had been set alight on the streets of Barcelona last night.

Medical responders said 131 people had been injured in the protests last night, 37 in Barcelona alone.

She said: “We do not just condemn these violent acts but call on people, in response to Monday’s court sentence, to continue to gather in Catalonia to protest civically and non-violently as they have always done and isolate these violent groups of people.”

Pere Aragones, vice-president of the regional Catalan government called the Generalitat, added in a tweet referring to the imposition of central government rule through the activation of the Spanish Constitution’s Article 155: “Don’t gift them what they are looking for. Don’t gift them a veiled 155.

“We have to defend our citizens and our institutions.

“Steer clear of all violent attitudes.”

Is it safe to travel to Barcelona right now?

Advice from the Foreign Commonwealth Office states that more protests could take place, and for travellers to take caution.

The statement on the unrest reads: “There have been large gatherings of people in Barcelona and other areas of the Catalonia region in relation to political developments there.

“Further gatherings and demonstrations are likely to take place. You should exercise caution in the vicinity of demonstrations as they may occur with little or no warning.

“Demonstrations intended to be peaceful can escalate and turn confrontational.

“Demonstrations may cause disruptions to transport including access to airports, roads and the railway and metro systems.

“Barcelona Tourism has launched a telephone line for those tourists that have missed their flight or couldn’t make it to their hotel: +34 93 285 3834.

“You can also check @emergenciescat for the latest updates on travel disruption (you will be given the option to translate to English when clicking on individual tweets).”

The Obama Portraits Have Had a Pilgrimage Effect