This is the shocking moment an airline passenger discovered a cockroach in her seat-back pocket – just moments after being served an in-flight meal.

The large dark red insect was filmed on board a Thai Airways Boeing 777 flying from Hokkaido, Japan, to Bangkok, last month.

The shocked passenger noticed the creepy-crawlie as it walked across the flight safety instructions then disappeared back inside its unlikely home in economy class. 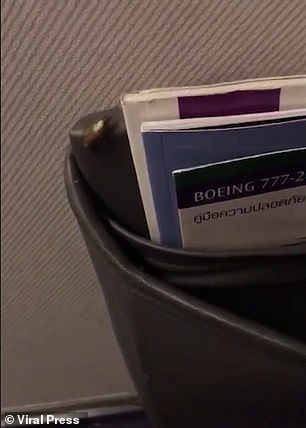 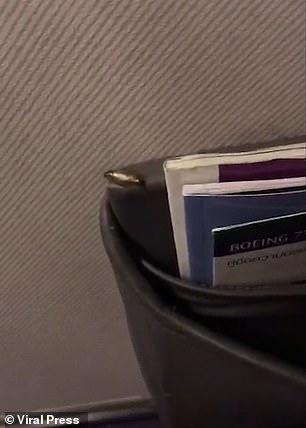 The large dark red insect was spotted walking over the safety card in one of the seat pockets. It was filmed on board a flight from Japan to Thailand

The flyer who recorded the insect, who is only known as ‘Jane’, said that it was only a short leap from her meal during the flight.

She explained: ‘A cockroach snuck inside the plane in Bangkok and flew to Hokkaido for free.’

It is believed the bug entered the plane in Thailand, where cockroaches are common.

It was then onboard for the flight to Japan, which has a temperature too cold for the insects, but then flew back again.

It’s not known how long the cockroach had been inside the plane but Thai Airways apologised for the incident and claimed the bug had become ‘resistant’ to insect spray. 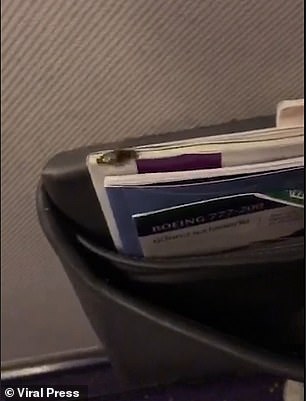 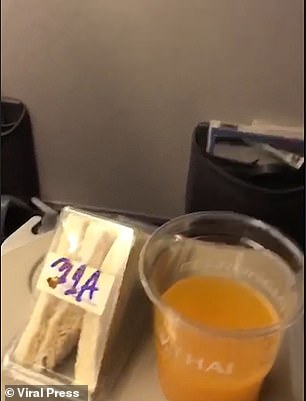 It is believed the bug entered the plane in Thailand, where cockroaches are common. It was spotted just after passengers had been served their in-flight meal (right)

Thai Airways director Chalermphol Kaewchinporn has now instructed cleaners to stick their hands into the pockets to check for insects.

He said: ‘I assume the cockroach has become resistant to the spray but we’ve ordered a new pesticide.

‘All the planes will be sprayed and cleaners will pay more attention to details and ensure that no scraps of food are left on the plane.’

A statement from the company said the aircraft had since undergone a ‘deep clean’ in line with its scheduled maintenance.