The runway at East Midlands Airport was closed this afternoon after a Ryanair flight suffered a burst tyre on landing.

The Irish carrier’s Boeing 737 had been returning from Barcelona when it experienced hydraulic issues as it descended.

The runway was closed for around an hour while the tyre was replaced and then the aircraft was towed away. 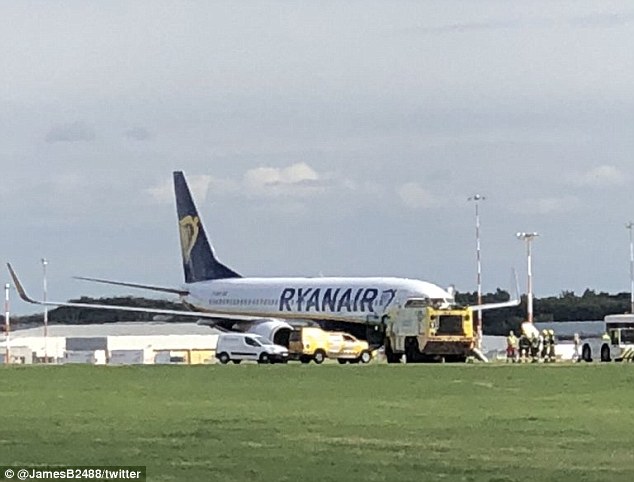 All passengers on board the flight were safely disembarked from the aircraft and bussed to the terminal building.

However, the incident is believed to have caused a knock on delay with other departures and arrivals, with some flights diverted to Birmingham and Doncaster airports.

A spokeswoman from Ryanair told MailOnline Travel: ‘The aircraft operating this flight from Barcelona to East Midlands suffered a burst tyre on landing at East Midlands Airport.

‘Customers disembarked and were transferred to the terminal by bus and engineers will repair the aircraft and return it to service.’

Twitter user James_B, who witnessed the incident wrote: ‘BCN-EMA aircraft stranded on East Mids runway only has one of its two nose wheel tyres blown hence “parked” half way down runway. 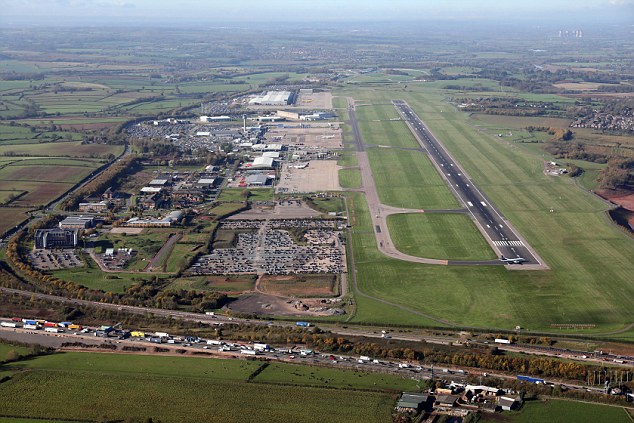 The runway at the airport, pictured, was closed for around an hour while the tyre was replaced and then the aircraft was towed away

‘Awaiting ground crew to “lift & shift” the airframe to a remote stand for inspection.’

Just yesterday a stunned plane crew watched in horror as a wheel fell off another Ryanair jet as it took off from Stansted airport.

The plane – destined for Copenhagen, Denmark, with 184 passengers and crew on board – was forced to make an emergency landing after a nose wheel came off during take-off.

The Boeing 737 was diverted to East Midlands Airport, where police held traffic on the M1 motorway adjoining the runway in case disaster struck.

In an amazing twist the hero pilot and crew looked up ‘how to land with a flat tyre’ in their training manual, which helped them bring the aircraft down safely.